Top Posts
Is It Time to Explore an Alternative to Fractional-Reserve Banking?
Can AgTech Prove Instrumental in Helping to Feed the World’s...
Can the Indo-Pacific Economic Framework Expand US Economic Influence in...
Banks Remain Uniquely Vulnerable to Sophisticated Cyber-Attacks
Western Banks Willing to Accept the Short-Term Pain of Russian...
Why the US Is Ramping Up Its Presence in Somalia...
Home Finance Negative Interest Rates: From the Wholesale Market to the Small Household
Finance

Negative Interest Rates: From the Wholesale Market to the Small Household 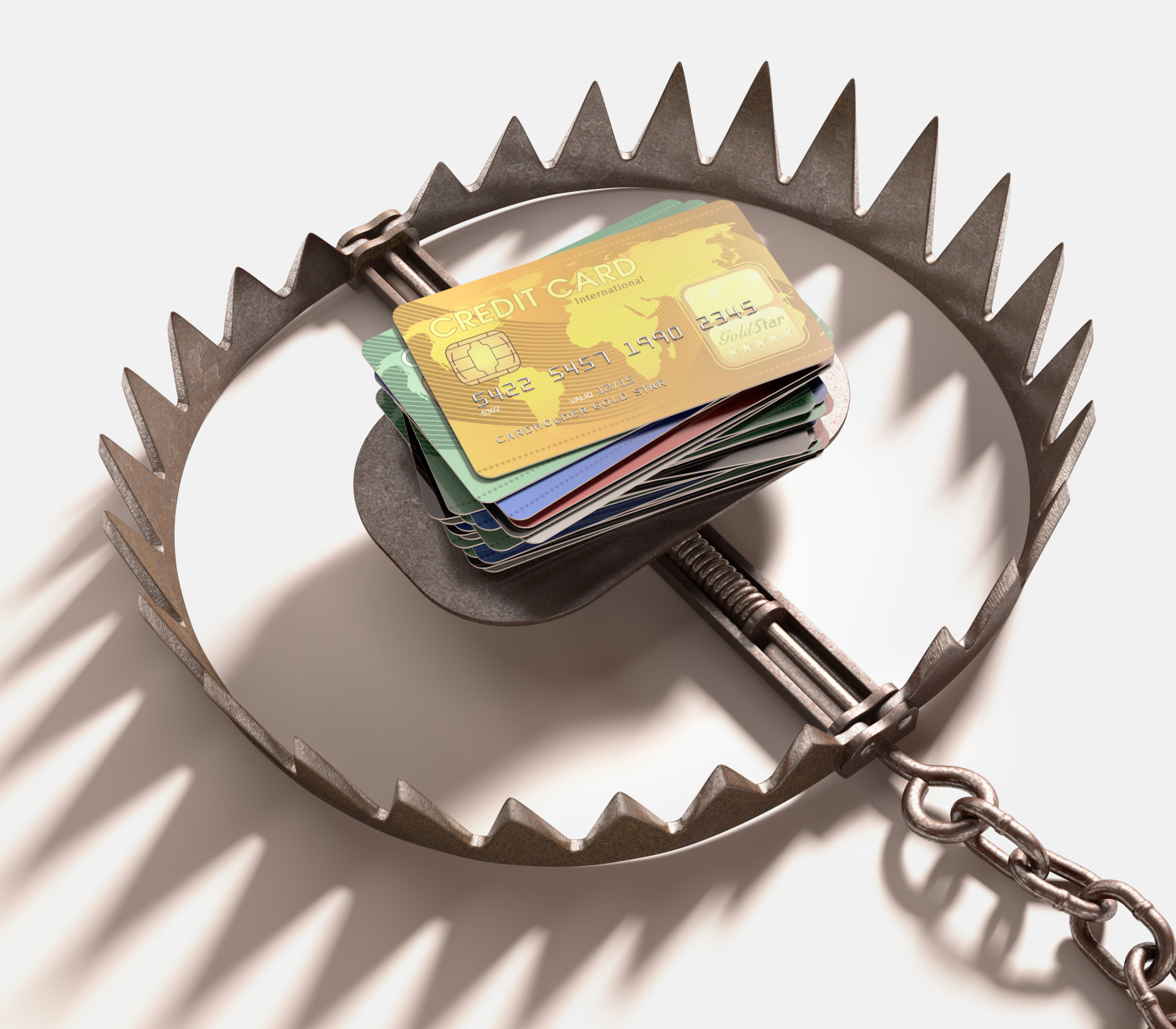 From textbooks, we have all learned the definition of the interest rate: the amount paid by the borrower to the lender for the use of the lender’s money. In a nutshell, the interest rate is the cost of borrowing money. It applies not only to regular loans granted by banks to firms and households but also to a variety of other financial contracts (customer banking deposits, interbank deposits, repo transactions, derivatives, etc.).

Therefore, our common sense would tell us that the interest rate should always be positive (or nonnegative) as the borrower would always have to pay some compensation to the lender for the use of his or her money.

One of the main reasons central banks would not cut interest rates into negative territory is that it would lead agents to withdraw their banking deposits and hold their money in the form of cash, as they would be better off. Instead of seeing their banking deposits shrink as a result of negative interest rates, they would maintain the same nominal cash amount, as cash gives zero nominal return.

In conclusion, theory predicted that under a recession or deflationary period a central bank could act through its interest rates only until it reaches the zero level. If reached, a central bank would have to resort to unconventional measures to expand the monetary base and boost growth and inflation. The quantitative-easing instruments are a case in point. This was the case of Japan during the 1990s and the US during the Great Recession, in the aftermath of the 2007 financial crisis. Besides unconventional monetary-policy measures, fiscal policy can also prove to be very helpful in boosting demand and inflation.

A negative interest rate implies a complete inversion of the normal way of thinking. The agent who borrows becomes entitled to receive interest, while the lender not only lends the money but also has to pay interest. In practice, what happens is that the borrower would borrow 100 and at the end of the contract pay 100 less interest. Why would someone be willing to incur the risks of lending money and on top of that receive back a lower amount?

This situation may seem apparent “non-sense”, but it is based on the existence or non-existence of available investment alternatives that, for the same risk profile, yield a positive return. In the absence of those alternatives, and especially for agents holding large amounts of money, there is no alternative to lending money at negative interest rates, either to governments or banks, or even households and firms. 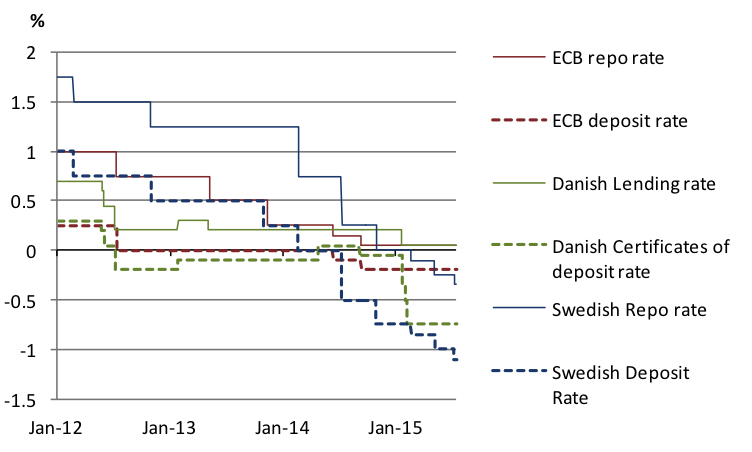 Denmark, Sweden and Switzerland are special cases. These European economies, although not Euro members, are highly dependent on and interlinked with the Eurozone economies. Since the onset of the European sovereign debt crisis, they were not only affected by the economic slowdown and low inflation but were also seen by investors as safe havens and thus recorded massive capital inflows.

These huge capital inflows pressured their respective currencies, and their central banks were required to directly intervene in the markets in order to counter the appreciation of their currencies. However, the pressure was so huge and the capital inflows so massive that some of these central banks were not able to “win” against the markets. For instance, the Swiss National Bank had to abandon in January of this year its ceiling of 1.20 CHF/EUR, maintained since the height of the Eurozone crisis. This was because the capital inflows were so significant and the bank was buying so many euros in the market that this dimension of its balance sheet was starting to pose serious risks to the bank’s survival, should its euro reserves lose part of their value. On the other side, for instance, Denmark was able to maintain its krone within the established fluctuation limits and close to the central rate.

On top of the direct market interventions, the central banks of these small European economies also resorted to the imposition of negative rates to dissuade capital inflows. This tactic was crucial to avoid higher valuations of their currencies, which would have worsened the economic slowdown and the deflation phenomenon, as a strong currency implies lower import prices.

However, the European Central Bank (ECB) was the first major world central bank to introduce official negative interest rates. First, it moved its deposit facility rate from 0 percent to -0.1 percent in June 2014 and further to -0.2 percent in September 2014. This negative rate is levied not only on the amounts deposited by banks at the Eurosystem deposit facility but also on the amount of excess reserves (i.e., the amount above banks’ minimum reserve requirements) held by banks in their current accounts within the Eurosystem.

Contrarily to the small European economies, which introduced negative rates essentially to counter higher valuations of their currencies, the purpose of the ECB was different. With the European sovereign debt crisis dragging out and demand depressed by the austerity measures imposed in several European countries, inflation levels started to decelerate. In the second half of 2014, also supported by the sharp drop in oil prices, inflation became eventually negative and sparked fears of a Japanese-style crisis. 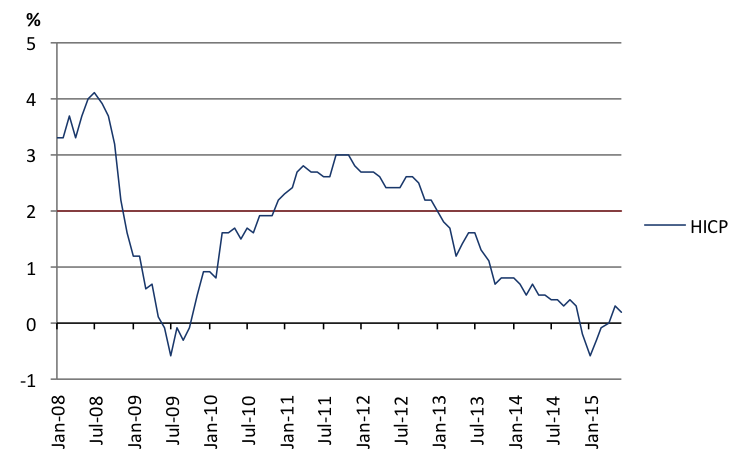 With such a depressed economy and demand, there were material risks of deflation becoming entrenched in the Eurozone. Actually, the inflation expectations, either those forecasted at the ECB or those inferred from the market (through inflation swaps), showed that over the medium term, inflation expectations were becoming unanchored.

Therefore, in order to fulfill its price-stability mandate (inflation levels below but close to 2 percent) and among many other unconventional monetary policy measures, the ECB implemented the negative deposit facility rate. The main idea behind this measure was to force bank lending to the real economy, especially households and firms, instead of just depositing liquidity within the Eurosystem. By boosting credit, the ECB expected demand to recover and inflation to start rising again towards the medium-term Eurosystem target.

Additionally, with negative rates, the ECB also tried to reduce the fragmentation of the euro money market, one of the byproducts of the sovereign debt crisis. This phenomenon emerged with the crisis and is characterized by the liquidity being concentrated in a few core European countries. Therefore, while the overall liquidity existent in the system is high, only a few jurisdictions hold that liquidity. Conversely, the peripheral countries’ banks, those more in need of liquidity, do not have access to market liquidity. By adopting the negative deposit rate, the ECB expected to force cash-rich banks to lend to peripheral banks, instead of keeping liquidity deposited with the Eurosystem.

Due to the various monetary-policy measures adopted lately by the Eurosystem, the targeted longer-term refinancing operations but mainly the asset-purchasing programs initiated in the last quarter of 2014, it is not easy to assess the individual impacts of the adoption of negative rates.

However, one thing is clear from the evidence: negative rates reached the various market segments. The European sovereign debt yields decreased markedly, reaching negative levels for several countries, especially in core economies, and up to maturities as long as five years for Germany. In the interbank money market, where transactions between banks take place, the first segment to record negative rates was the secured segment, especially in the transactions with underlying core-countries collateral. In the end, even the unsecured segment started recording negative rates.

From the real-economy perspective, it is important to highlight the sharp drop in Euribor rates, the main reference rate in the Euro countries used as a benchmark for many loans to households and firms and also in many financial derivatives contracts. This drop reduces the funding costs of households and firms, fostering consumption and investment, and in the end boosts inflation. These impacts are particularly noticed in those countries in which variable-rate loans comprise a greater share of total loans, as rates in existing loan contracts reduce automatically with decreases in Euribor rates. 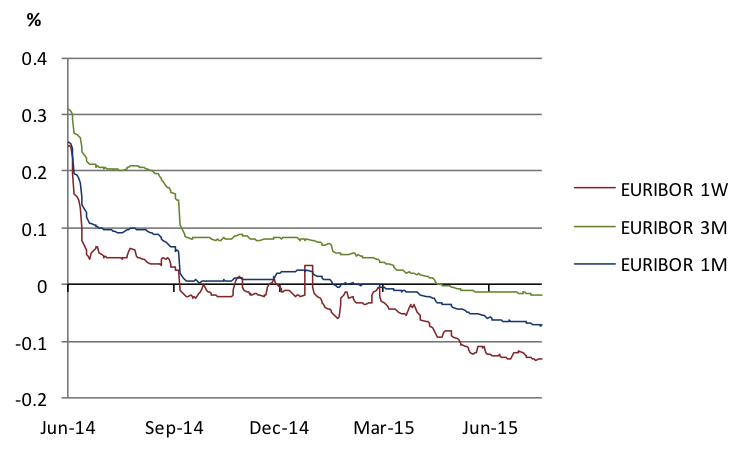 To sum up, it might be too soon to draw final conclusions regarding the impacts of the negative interest rate adopted by the Eurosystem, but definitely it was one of the driving forces behind the recent decline in market interest rates, which not only alleviated the funding costs of sovereigns and firms but also helped households by reducing their loan costs.

However, it remains unclear whether a prolonged period of negative rates might also produce negative outcomes, namely banks may be reluctant to extend new credit as the margins they obtain may not be attractive enough, and they may also produce bubbles in specific financial-market segments.

Bank to the future: Love legacy and live digital