Top Posts
What the Ukrainian Invasion Tells Us About Lawyers, Banks and...
Can Wall Street Prevent a Painful Round of Expected Job...
Why Data Sharing and Technology Are Key to Tackling Illicit...
KBC Group: Behind the Success of Europe’s Top Bank-Insurer
Designing the Next-Generation Banking Treasury Management
Is the US Finally Warming to the Possibility of Creating...
Home Finance No.1 Reason The Fed Will Shy Away From June Rate-Hike
Finance

No.1 Reason The Fed Will Shy Away From June Rate-Hike 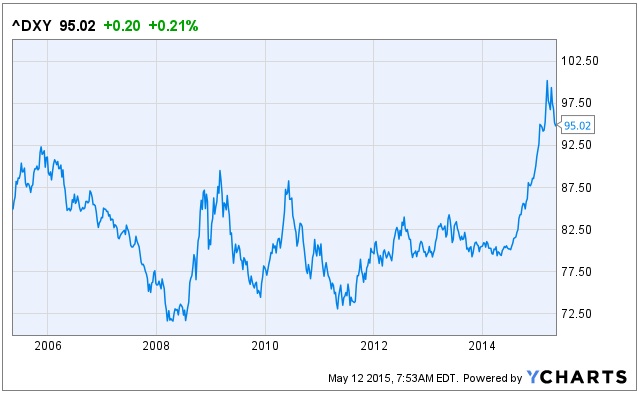 There was one word that both the Federal Reserve and the White House didn’t mention in their statements after the disappointing first-quarter gross domestic product report, released late last month.

If you search statement put out by the White house or the text of the Federal Open Market Committee’s statement, both avoided any direct mentions of this one word that has in part played havoc with the U.S. economy this year.

Over the last few years, frigid temperatures have been a main reason for economic slowdown and earnings weakness in the first quarter. But this time around, companies have a new whipping boy for any weakness on either their top or bottom lines.

It is for this reason General Motors (GM) lost $1.8 billion in revenue in its first quarter; consumer giant Procter & Gamble (PG) lowered its outlook and now expects its full-year net sales to fall 5 to 6 percent; and 3M (MMM), the Post-it Notes-maker, said the impacts shaved $90 million off its first-quarter pretax earnings, plus it now expects an adverse impact of 35 to 40 cents a share on full-year 2015 earnings, versus a prior expectation of 20 cents. If you haven’t guessed it by now, it’s the dollar.

A part of the reason that neither the White House nor the Federal Reserve talk about the dollar is because of politics and the mantra that only the Treasury speaks about the dollar. True, Fed’s three key responsibilities are: maximum employment, stable prices, and moderate long-term interest rates. To that end, Fed chair Janet Yellen has time and again cited Fed’s dual mandate (i.e. employment and inflation) as the key factor in the central bank’s decision-making on the timing of rate hikes. However, economists believe the next meeting’s main storyline could be the surging dollar.

For multinational companies, or even smaller companies with some portion of their business overseas, that strength points to lower sales when the money is sent back from a country with an even weaker currency now, than it used to be a year ago. As a result, almost every multinational company that has reported this earnings season has referenced the dollar as a significant headwind, and some have even lowered their outlooks for the second quarter and the rest of the year because of it. Companies like Kimberly-Clark (KMB), McDolnald’s (MCD), Ominicom (OMC), among others have been hit from the strong dollar. 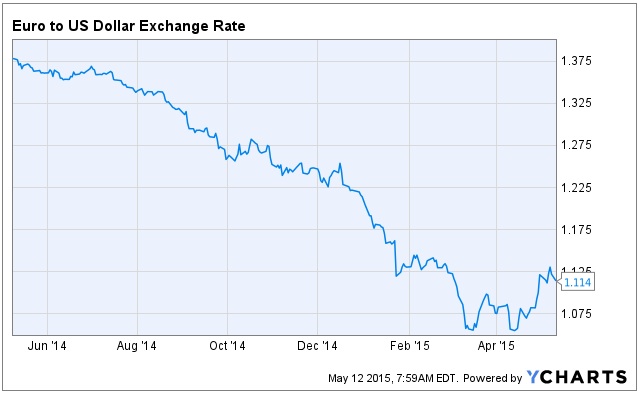 The dollar has jumped as much as 8.23 percent year-to-date against the euro, a trend change that has been hurting the profit outlook for U.S. companies and is akin to monetary tightening. Needless to say, the weakness in euro is also because of the bond-buying program that the European Central Bank initiated in March this year, and for now, expects to continue until September 2016. So euro would likely remain under pressure for another 15 months or so, before we see any resurgence in its value. The ECB also hinted a possible delay in pulling the plug on program, which could easily take the program-end to 2017.

And though policymakers across the Atlantic never directly reference ECB’s quantitative easing program as a reason Fed should delay its rate hike, some top officials have indirectly called for a 2016 rate-hike. It’s definitely something U.S. policymakers have on the back their minds.

Among recent Federal Reserve speakers, Chicago Fed President Charles Evans in a speech May 4 said that monetary policy tightening does not seem appropriate until next year in the wake of weak first-quarter economic data. Minneapolis Fed President Narayana Kocherlakota echoed the same view, saying “the FOMC can best achieve its objectives by keeping the fed funds rates target at its current level during this calendar year.”

What is really worth a thought here is the impact of the dollar if the Federal Reserve raises rates early. Markets are unlikely to hold out against the dollar’s growing strength for too long. Not to mention, a strong dollar is not something the central bank would want either, as it slows the rate of nominal GDP. Basically, GDP is being reallocated from nations tightening their monetary policy, such as the U.S., to others that are aggressively easing monetary policy, such as the EU or Japan.

Additional, even if we were to consider the dual mandate, official inflation rate remains below central bank’s target of 2.0 percent. Core consumer prices climbed 0.2 per cent March, nudging the annual rate to 1.8 percent from 1.7 percent in February, but it seem less likely to surpass the 2.0-threshold in April. On the employment front, the U.S. job market has clearly improved, with steady payroll gains over the last several months – except for March – sending the unemployment rate to 5.4 percent, the lowest level since May 2008. But taking a closer look, you will find wage growth remains low – average hourly earnings are up just 2.17 percent in the past year. Further, participation rate also remains mired 62.8 percent, a level not seen previously since the 1970s.

Given the current jobs and inflation and the Fed’s data-dependance, a June rate-hike seems like a remote case. That said, economists still believe consensus is building within the FOMC to raise rates some time towards the end of this year or early next year. What could really complicate Fed’s rate-hike plans come June 16-17, is the growing strength on the U.S. dollar.

Commercial Bank of Qatar Prospering in a Strong Economy