Top Posts
Could Big Tech’s Iron Grip on Digital Advertising Soon Come...
Can Recent Oil Discoveries Prove to be a Boon for...
Is It Time to Explore an Alternative to Fractional-Reserve Banking?
Can AgTech Prove Instrumental in Helping to Feed the World’s...
Can the Indo-Pacific Economic Framework Expand US Economic Influence in...
Banks Remain Uniquely Vulnerable to Sophisticated Cyber-Attacks
Home Finance Oil company – and financial – risk in the high Arctic
Finance

Oil company – and financial – risk in the high Arctic 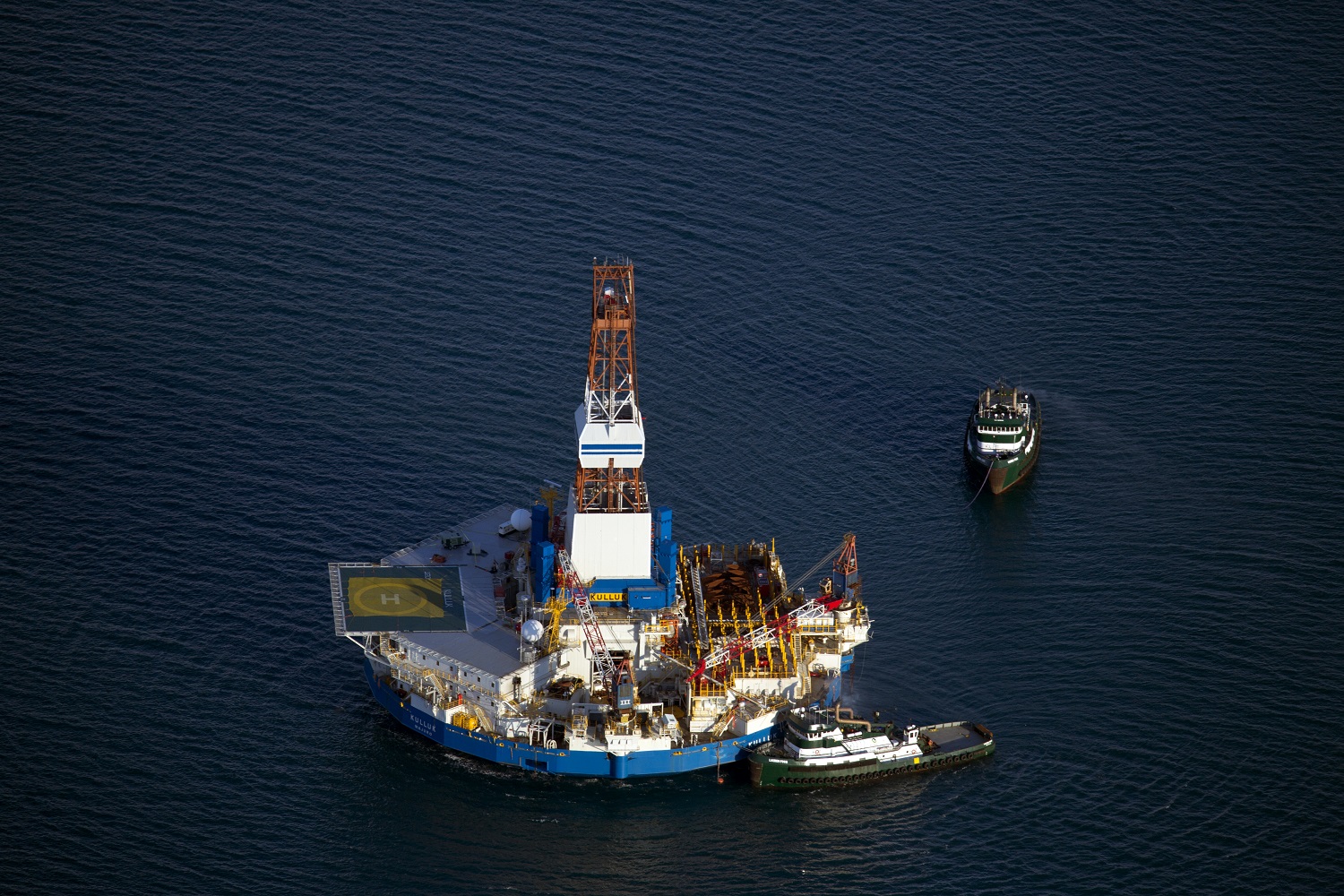 Historically, the relationship of the fossil fuel industry – particularly the giant international oil companies (IOCs) – and large financial institutions and international capital markets has been both close, and for the most part, mutually beneficial.  In the UK, Shell and BP have alternated as the biggest holding in most large pension funds, providing both security and a steady dividend.  However, since BP’s catastrophic Deepwater Horizon accident in 2010 – when the company’s share price was slashed and the dividend suspended, and more recently Shell’s attempts to gain approval to drill for oil in the remote Arctic waters of the Chukchi Sea, the already substantial challenges facing IOCs – including the lack of access to easily accessible conventional oil and the increasing pressures of climate change – continue to intensify.  And as a result, their position as a trusty cash cow for the capital markets is being undermined. Despite investing more than US$5bn over nearly nine years (for both the Chukchi and the Beaufort seas),[i] Shell has not yet booked any reserves from these prospects. While not solely to blame, excessive capital expenditure – of which spending on Arctic drilling is a part – has been identified by Shell as part of the backdrop to its January 2014 profit warning.[ii]

In the context of ongoing high capital expenditure, Shell’s efforts to drill exploration wells in 2012 revealed a cascade of operational problems that contradict the confident statements to investors from board members to shareholders about the company’s capabilities. Among other problems, the company failed to secure timely certification of its containment barge, failed to test essential spill containment equipment successfully, violated permitted air levels, failed to achieve necessary health and safety standards, nearly grounded of one of its drilling vessels, and ultimately, failed to secure permission to drill for hydro-carbons.

In December 2012, Shell’s situation deteriorated further when its drilling rig, the Kulluk, which was being transited under difficult winter conditions – in part to reduce tax liabilities in Alaska, ran aground near Kodiak, Alaska. Shortly before the publication of the US Department of the Interior’s investigation into Shell’s activities during the 2012 drilling season, Shell announced that it was “pausing” its drilling programme “to prepare equipment and plans for a resumption of activity at a later stage”.[iii]  Nearly a year later, substantial questions remain regarding the future of the oil industry in the Arctic. The question also remains as to why major investors and financial institutions are failing to ask those questions of Shell.

In addition these risks are not limited to the Alaskan Arctic; the Russian Arctic also has substantial challenges for shareholders in IOCs and financial institutions with whom they deal.  Access to the Russian Arctic is currently restricted to companies with majority state ownership and five years’ Arctic experience. The only companies currently satisfying these criteria are Rosneft and Gazprom.[iv]  Beginning with BP’s now abandoned 2011 joint exploration deal with Rosneft, there has been a flurry of announcements of deals between IOCs and one or other of the Russian national oil and gas companies. Exxon Mobil, Statoil and Eni are all in joint ventures (JVs) with Rosneft. 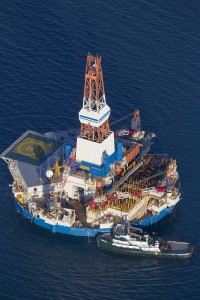 Salvage teams conduct an assessment of Shell’s Kulluk drill barge on January 8, 2013 in Kodiak Island’s Kiliuda Bay in Alaska.
The Kulluk, a circular drill barge without its own propulsion, ran aground New Year’s Eve in a powerful storm off the coast of Sitkalidak Island in Alaska. It was being towed to Seattle for maintenance before it ran aground.
The Kulluk was being held in place by the anchor handing ship Aviq and tug boats Alert, Corbin Foss, Lauren Foss and Ocean Wave.

BP has since become the holder of 19.75% of the shares in the Russian company[v]. Recently, Shell has taken further steps towards cementing its own strategic Arctic partnership with Gazprom.[vi] These alliances expose IOCs and their shareholders to risks including poor environmental and safety performance, questionable corporate governance, an unpredictable political, regulatory and fiscal regime and a lack of corporate transparency.[vii]

Attitudes towards drilling in the Arctic are continuing to change across the industry. Other oil majors – Statoil, Conoco-Philips and Total – have all stepped back from drilling for oil in US Arctic waters, largely at the project level, for reasons of cost as well as regulatory uncertainty; both of which now represent material risk to shareholder value. Total has announced that it would not drill for oil at all in the Arctic Ocean due to the reputational risk of any spill in the region.[viii]In addition, respected international commentators, including industry analysts such as Bernstein and Wood-McKenzie have questioned the attractiveness and profitability of projects in the region, with time frames “likely to disappoint”.[ix]

Similarly, the International Energy Agency (IEA) questions the likelihood of substantial extraction, and therefore profitability in the Arctic Ocean before 2035.  This analysis has underlined the increasingly crucial debate over the continuation of growth in global oil demand. Deutsche Bank, HSBC and Citi are all now positing – for a variety of reasons, almost none of them traditional ‘environmental‘ concerns – that there is now a very real possibility that global oil demand will peak before or around 2020.[x]  Given this time frame, the viability of offshore Arctic oil extraction seems to rest on continued oil demand growth and high oil prices. This, in turn, rests on continued inaction to address climate change and a lack of innovation in the transportation sector that is far from guaranteed.

This apparent complacency is particularly worrying for management and shareholders of large financial institutions whose faith in large capital projects in the fossil fuel sector have troubling echoes of their confidence in the property markets and associated bundled debt instruments in the run-up to the financial crisis in 2008.   Some large banks were considered – mistakenly as it happened – too large to fail.  In 2010, in the wake of the Deepwater Horizon blowout, credit was withdrawn; consequently BP was days from, if not bankruptcy, at least being broken up, in a fire sale of assets with potentially catastrophic implications for investors and creditors.

Almost four years after the Deepwater Horizon disaster, BP is still banned from bidding for government contracts. [xi] In order to pay the penalties and address longer lasting financial impacts, BP has sold assets worth US$38bn in the past three years.[xii]

Since Shell is self-insured to only US$1.15bn per event,[xiii] it is likely that Shell would have to conduct a similar ‘fire sale’ of assets to meet the resulting financial liabilities of a major Arctic spill. At present, it is far from clear that Shell has adequate physical or financial oil spill response plans. In fact, there is no available information about how the company would address the financial implications of a major spill.  The US government estimated that there is a 40% chance of a large spill (over 1000 barrels) during the lifetime of exploration and extraction of oil in the Chukchi Sea.[xiv]

Unsurprisingly there is emerging reluctance from investors to accept ever-increasing capital expenditure (capex) in a high cost region with little or no corresponding return on investment – but with real potential for a catastrophic – and currently un-costed accident in a high value ecosystem. Commentators and asset managers are now questioning whether such high capex is actually eroding shareholder value, even in a high oil price environment[xv] – as indicated by Shell’s profit warning. It is in this highly volatile environment that Shell sought new regulatory approvals to return to the US Arctic Ocean. Despite the failure of Shell’s offshore Arctic exploration to date, the company is still the most publically committed of IOCs to offshore drilling in ice-covered waters, in spite of the many operational questions – including spill response capacity and equipment – that remain unanswered to the satisfaction of the US government and others, along with questions of real economic risks to these projects that remain unanswered to the satisfaction of analysts.  Financial institutions, analysts, asset managers and of course investors will need to assess this matrix of risks – operational and regulatory risk, management issues, local and global environmental challenges.

In this context the confidence in the ever-upward trajectory of global oil prices is currently subject to much debate. While the unprecedented rise in prices during the first decade of the twenty first century led to expectations of relentlessly climbing oil prices for years to come, a different scenario is emerging in the second decade. Since 2010, global oil prices have stagnated, albeit at a historically high level. Unrest in the Middle East, particularly the Libyan civil war, led to some spikes, but the overall trajectory has been surprisingly steady with the price of Brent generally hovering around the US$100–US$105 per barrel mark at the beginning of 2011.

While short to medium-term oil market dynamics currently appear to be highly volatile, it is the oil market of the 2030s and beyond that will govern whether high cost, capital intensive offshore Arctic oil extraction will turn a profit. This market will depend in part on highly unpredictable technological changes in transportation efficiency and perhaps most importantly, certainly for Greenpeace, the manner in which governments address global climate change. Preventing highly disruptive climate change – and certainly reaching the goal of keeping global temperature rise below the 2ºC threshold for catastrophic climate disruption – will necessitate reducing oil demand and result in lower oil prices. These changes would likely undermine extraction from expensive, remote and marginal oil fields such as offshore in the US Arctic.

In that context, the Arctic Ocean presents an almost perfect storm of risks, not just for the oil companies involved, but also for the financial institutions and markets to which they are inextricably linked:  a requirement for a long-term capital intensive investment for uncertain return, a remote and uniquely challenging operating environment, on-going court challenges, a lack of extraction and spill response infrastructure, and the spotlight of the world’s environmental organisations, the US political community and international media. The constraints are legion, and whether we seek to preserve financial or environmental capital, to avoid squandering crucial assets – either unspendable capital or unburnable carbon – the world’s financial institutions and capital markets are going to have to act,  to avoid sleepwalking into another catastrophe, that could potentially dwarf that of the financial crisis of 2008, with no institution too big to fail, and no bail-out big enough – or available, should it be required. [xvi]

[iv] Torgovo-Promyshlennye Vedomosti. 2013. ‘The Shelf Will be Carved up for State-Owned Companies’. http://www.tpp-inform.ru/analytic_journal/3091.html(Russian)

[vii] for a more complete analysis of the risks of joint ventures with the Russian State oil companies, see:  http://www.greenpeace.org.uk/sites/files/gpuk/Investor_report_Arctic_risks_2013.pdf

[xvi] For a complete up to date analysis of Shell’s challenges in the Alaskan Arctic, see: http://www.greenpeace.org.uk/media/reports/frozen-future-shells-ongoing-gamble-arctic