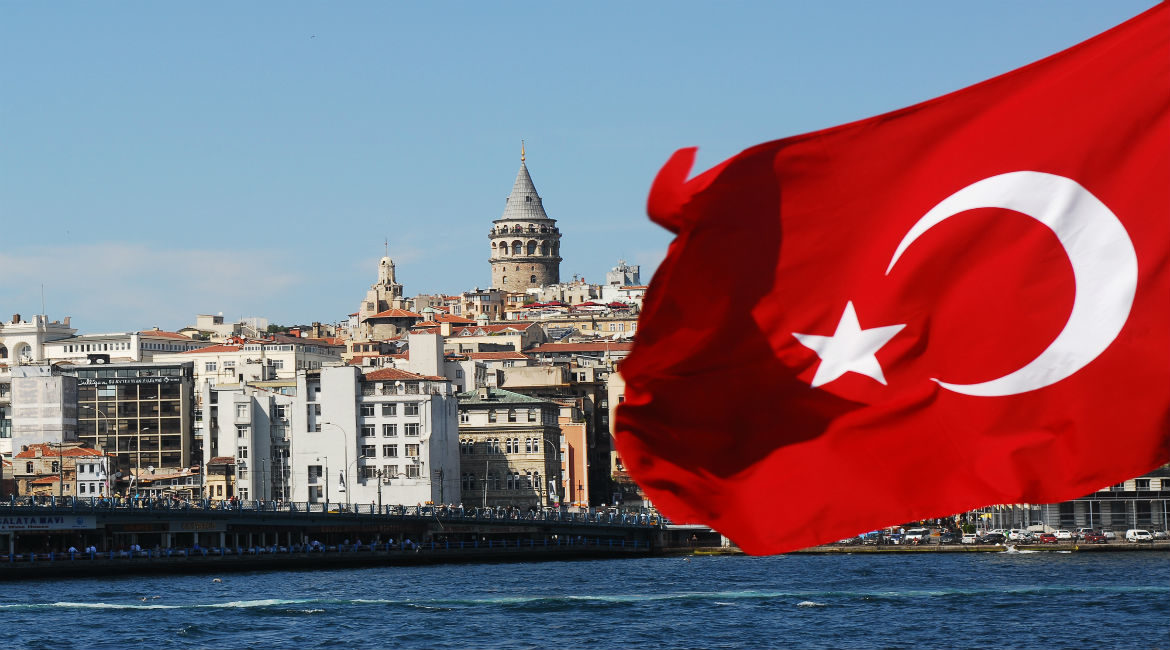 I have just authorized a doubling of Tariffs on Steel and Aluminum with respect to Turkey as their currency, the Turkish Lira, slides rapidly downward against our very strong Dollar! Aluminum will now be 20 percent and Steel 50 percent. Our relations with Turkey are not good at this time!US President Donald Trump (via Twitter), August 10, 2018

At the end of August, leading ratings agency Moody’s downgraded 18 banks and two finance companies in Turkey. According to the agency, the downgrades “primarily reflect a substantial increase in the risk of a downside scenario, where a further negative shift in investor sentiment could lead to a curtailing of wholesale funding”. Moody’s also observed that Turkey’s operating environment “has deteriorated beyond its previous expectations” and expects it to continue doing so. As such, Turkey’s Macro Profile has been lowered from “Weak” to “Weak-”.

Upon the announcement of the downgrades, which underline the risk to Turkey’s banking sector of the ongoing currency crisis, the lira plunged back toward the record lows it experienced earlier in the month:

The beleaguered currency has already lost about 40 percent of its value against the dollar in 2018 alone, raising serious concerns over Turkey’s ability to repay its sizeable dollar-denominated debts. And although it seemed to have reversed course earlier in August, the renewed weakness only highlights the country’s precarious economic situation at present. J.P. Morgan Asset Management recently described Turkey as being “in the midst of a perfect storm” of deteriorating financial conditions, weakening investor sentiment, abundant economic mismanagement and external threats, especially from the United States in the form of tariffs. But problems have been mounting for some time.

The NATO (North Atlantic Treaty Organization)memberis a net oil importer,with net imports representing 0.7 percent of its gross domestic product (GDP), which has put the country on weaker footing this year as oil prices have risen. With inflation now accelerating, partly as a result of the oil rally (and hitting a whopping 15.9 percent in July), and with the current-account deficit consistently worsening, Turkey has become increasingly vulnerable to outflows of capital. Indeed, with sentiment continuing to turn more negatively towards emerging markets in 2018, Turkey has been seen as a particularly fragile case, thanks in no small part to its current-account deficit running at 6 percent of GDP and 39 percent of its government debt being USD-denominated.

So, it was not exactly a move welcomed in Turkey when US president Donald Trump announced that he would be doubling US import tariffs on Turkish steel and aluminium, which themselves followed sanctions imposed by the US on certain Turkish officials. The actions taken by the US are in response to Turkey’s refusal to release Christian evangelical pastor Andrew Brunson, who was detained on espionage and terrorism charges for his alleged support of outlawed groups accused of being involved in 2016’s failed coup against President Recep Tayyip Erdoğan. And they have managed to compound Turkey’s economic position, which was already looking somewhat bleak.

The problem for the global economy, meanwhile, is that Turkey’s deterioration has the chance of spreading contagion risk to neighbouring countries, especially foreign banks with exposure to the lira: 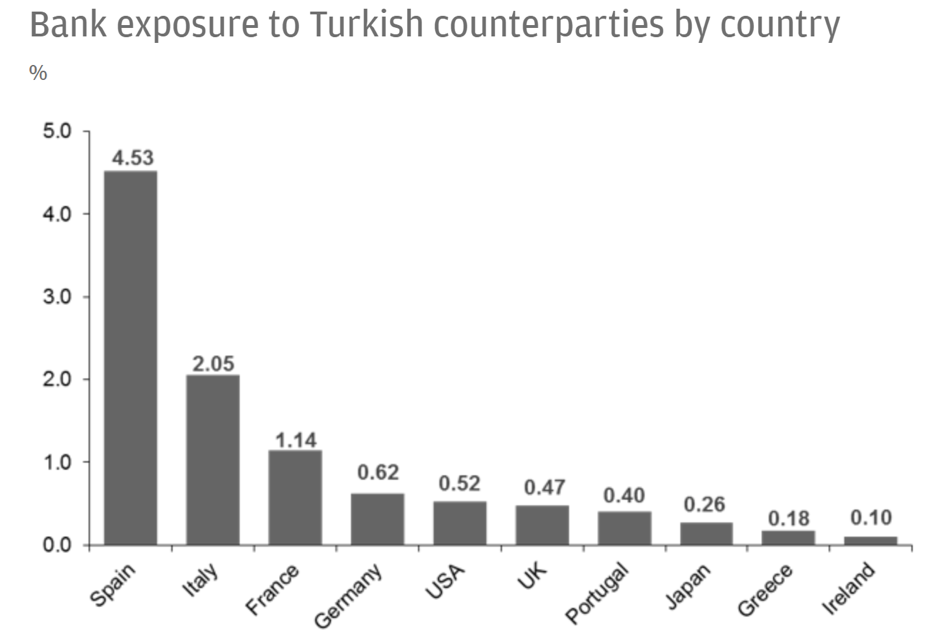 On the day that Trump announced the doubling of tariffs, moreover, the United Kingdom’s FTSE (Financial Times Stock Exchange) fell 75 points, while Germany’s DAX closed the day 2 percentlower. Given that Turkey has amassed massive piles of foreign-denominated debts—by the end of 2016, almost 90 percent of loans to Turkish real-estate companies were denominated in foreign currencies—and given that the earnings of firms are mostly in lira, the decline of Turkey’s currency is making it increasingly difficult for companies to service their debts. The Institute of International Finance now estimates that more than 50 percent of Turkish stocks are owned by US investors, while The New Yorker reports that “debt in foreign currencies, most of it in dollars, now represents around 70 percent of the Turkish economy”.

And underneath it all, disaster might well have been—and may well still be—averted had it not been for the strongman politics of Erdoğan. Indeed, the worsening situation has been met with an almost bemusing obliviousness on the part of Turkey’s leadership. As noted by J.P. Morgan, “The Turkish government’s response has been seen as inadequate by investors, as the central bank has not meaningfully raised rates, and the government has yet to present a comprehensive economic plan to deal with the turmoil.” This is especially pertinent given the changes Turkey has experienced in recent years. The diplomatic tension between Erdoğan and the West, coupled with the president’s moves towards authoritarian rule that was cemented by his election victory—which gave him farther-reaching powers than was previously the case—has forced a hefty chunk of global investors to exit Turkish markets. This has put a damper on economic growth and pushed prices in the country higher.

Given such serious problems, therefore, one would reasonably have expected interest rates to have been substantially hiked to contain inflation and bring prices down again. But with inflation nearly touching 16 percent, rather than nudge rates higher, Turkey’s central bank decided in July to hold rates at 17.75 percent. While this may already seem high in comparison to Western economies, the lack of further monetary tightening is a clear sign that Turkey has done less than what is needed to control inflation and bring the lira back on track. Much less. Perhaps it’s Erdoğan’s view that “interest rates are the mother and father of all evil”—an opinion he vented back in May—that is preventing Turkey from taking the necessary steps to resolve the situation. Concerns also abound over the influence the government wields over Turkish economic policy, especially given that Erdoğan recently appointed his son-in-law to run the Ministry of Treasury and Finance, and then gave himself sole power to name the new governor of the central bank.

Either way, it now puts Turkey on the brink of disaster. Noted research house Capital Economics believes the lira’s recent nosedive has already caused Turkey to enter recession territory. The firm’s senior emerging-markets economist, Jason Tuvey, has informed clients that data now emerging from Turkey strongly implies that a recession is underway, and will be officially confirmed by the end of the year. “Overall, there’s no getting away from the fact that the Turkish economy is experiencing a deep downturn,” Tuvey wrote, pointing to a contraction in industrial production of 0.7 percent, compared to 1.8 percent growth in the first quarter, as well as confidence in the construction, retail and services sectors reaching a “record low”.

If true, it will mark a dramatic reversal of fortune for Turkey’s economy, which despite its problems, had been roaring along at 7.4 percent growth during the first quarter. With the US Federal Reserve System now keen to normalise its monetary policy and unwind its QE (quantitative-easing) programme, US interest rates are likely to increase several times over the next 12 to 18 months as the US economy grows stronger. In turn, this will further exacerbate Turkey’s woes as servicing its piles of dollar-denominated debt becomes even more expensive. While it may not be time yet for the International Monetary Fund (IMF) to intervene with financial support, it seems the economic outlook for Turkey will remain decidedly gloomy for some time to come.