Resilience: Making a Mark in a Challenging Market Through Innovation

Sierra Leone is a nation on a journey of self-discovery, working hard to convert its vast riches into both economic wealth and social wellbeing for the benefit of the entire 7.7 million population. The country is blessed with an abundance of mineral resources, which include diamonds, chromite, rutile (among the largest reserves in the world), iron ore, titanium ore, bauxite, gold and platinum, as well as fishery resources and arable land—all of which have been poorly exploited. Sierra Leone remains among the world’s poorest countries, ranking 184th out of 189 countries in the Human Development Index (HDI) report for 2018.

The economy of Sierra Leone grew at an annual rate of 7.8 percent over the period 2003-2014 but was undone in 2015 when it contracted by 20.5 percent due to the collapse of the two major iron-mining companies, Africa Minerals Limited and London Mining, caused by the fall in international iron-ore prices and the outbreak of the deadly Ebola virus, creating a medical emergency that led to the failure of many businesses and caused unprecedented job loss. Sixty percent of youth today are either under- or unemployed. 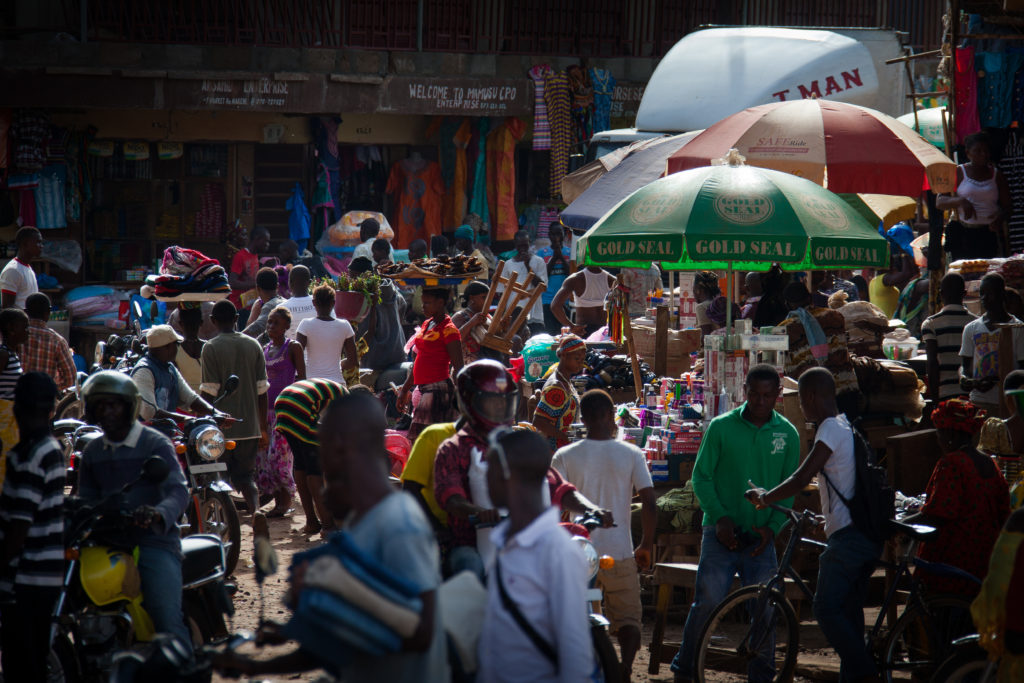 In Sierra Leone, the population heavily depends on food importation to cater to its consumption needs. Low foreign-revenue receipts are used among other competing needs to finance the importation of food because of the low level of agricultural outputs. Recognising agriculture as the biggest employer of labour, there is increasing active promotion of and support for the growth of agriculture and micro, small and medium-sized enterprises (MSMEs); agriculture accounts for about 60 percent of the country’s gross domestic product (GDP), and MSMEs employ 70 percent of the population. The Roadmap for National Agricultural Transformation (2018) targets four enablers for transforming the agricultural sector: improvement of the policy environment, promotion of women and youth in agriculture, establishment of private-sector-led mechanisation and sustainable management of biodiversity.

There is now a general acceptance that the financial sector has a central role to play in combating the current high levels of poverty and income inequality—a major component of which is the provision of financial access to the excluded 87 percent of the population, the bulk of whom are rural-based and dependent on subsistence agriculture for survival. The central bank expects the financial-inclusion system to fast-track growth and empower the poor with both capital and access—and thus reduce income inequality and poverty, and promote social cohesion and shared economic development. The central bank launched the National Strategy for Financial Inclusion in 2017, with the vision to make financial services available, accessible and affordable to all Sierra Leoneans and MSMEs, and support inclusive and resilient private-sector-led growth.

The contribution of the financial sector to the growth of the economy, however, continues to be hampered by major infrastructural gaps particularly in information and communication technology (ICT), power and energy, and institutional voids exemplified by the inefficiencies in capital and labour markets, weak property rightsand challenges encountered in the enforcement of rights through the court. These limitations increase the cost of business, escalate risks and reduce the chances of success of business, and they must therefore be removed by government to promote entrepreneurial growth.Even though the central bank has taken the initiative by rolling out the strategy to promote financial inclusion, not much progress has been made. One of the major reasons has been the inability of most of the population to meet the stringent identification requirements prescribed in the Anti-Money Laundering and Combating of Financing of Terrorism (AML/CFT) Act 2012 of Sierra Leone, which limits acceptable identity documents to only international passports, National ID cards and drivers’ licenses.

This excludes sizeable parts of the population from the financial system, as most do not need these documents in their daily lives. As a means of ensuring low-risk customers are accommodated in the financial system, Guaranty Trust Bank (Sierra Leone) pointed out this inconsistency and submitted a position paper to the central bank calling for the introduction of risk-based, three-tiered, know-your-customer (KYC), flexible account-opening requirements for low-value and low-risk accounts that are subject to caps and restrictions as the number of transactions increases. The central bank has adopted GTBank (SL)’s position paper and is on the verge of rolling out a four-tiered version of the proposal.

The entrance of Guaranty Trust Bank (Sierra Leone) Limited [GTBank (SL) Ltd], a subsidiary of Guaranty Trust Bank Nigeria, into Sierra Leone, starting in 2002, has served to radically transform the whole banking landscape and bring it in tune with fast-paced, customer-centric, technology-driven modern-day banking. The bouquet of innovative financial products and services specially designed and introduced to meet the divergent needs of the people has helped to expand the breadth of the economy, and the massive expansion of branch networks has helped some of the underserved and unbanked population to be reached. Also, improvement in efficiency has been triggered by the introduction of more advanced technology and increased competition among industry players.

The performance of GTBank (SL) in the Sierra Leone market has transformed it into a household name in the corporate- and consumer-banking industry on account of its consistent delivery of efficient services, innovation and year-on-year growth. The bank has consistently been among the most profitable and best-run banks in the country over the past six years. This performance has been despite the challenging market conditions and fierce competition in the industry. By a large extent, GTBank (SL) has achieved market dominance in both the upper corporate-banking and middle commercial-banking segments of the market and intends to achieve the same in the lower retail and SME segments, with a view to accomplishing financial-inclusion objectives, facilitating accretion of social capital and mobilizing cheap deposit liabilities.

The bank recently launched its five-year-strategy growth plan predicated on the expansion of the bank’s retail footprints across the country.  This strategic approach involves leveraging on partnerships with fintech companies to provide customers with innovative digital product solutions designed to meet diverse needs, delivered in a cost-effective manner.  Through these partnerships, the bank has been able to set the pace in digital banking innovations. It pioneered the rollout of several products, including SMS banking, a Leone-denominated MasterCard debit card and internet banking, and it gave a fillip to the adoption of ATM (automated teller machine) and POS (point of sale) channels by the general population. 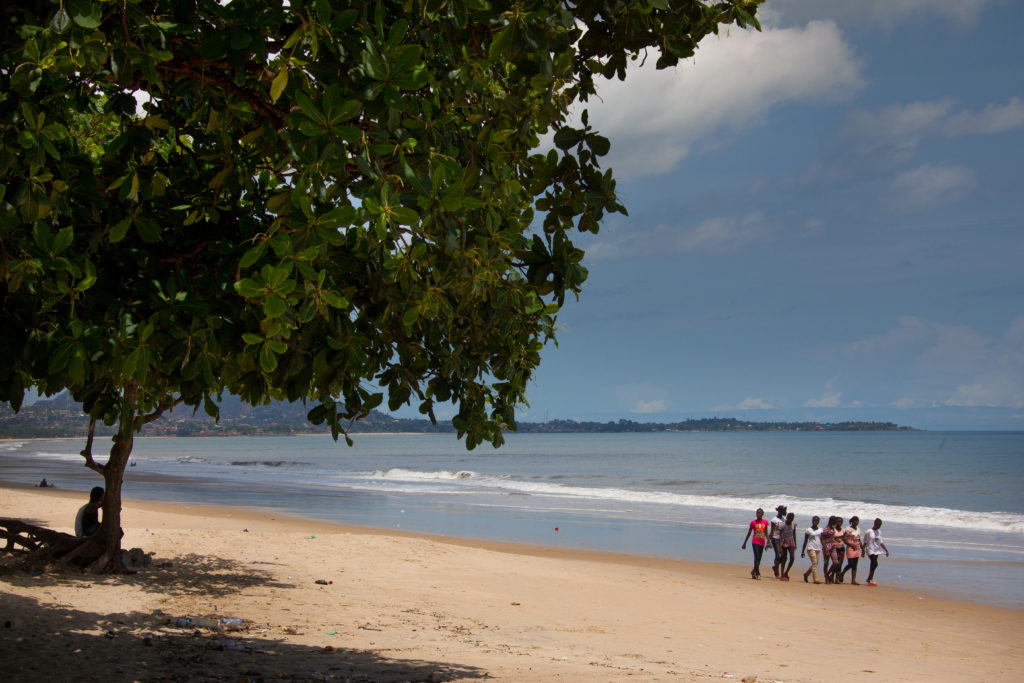 Considering that Sierra Leone’s population is one of the poorest in the world with a significant number listed at the base of the pyramid—with internet penetration and access to utilities remaining very low—cost becomes a big consideration in growing the retail market both on the part of the customers as well as the bank. It was generally accepted that to be a market leader and a preferred bank of choice in the retail business, we needed to leverage on branchless-banking technology to deliver products and services all over Sierra Leone without the use of the internet.

This has led to our partnership with Mobinet Solutions Ltd to introduce GT-SIMPAY, the very first mobile-banking product built on SIM (subscriber identity module) overlay technology riding on encrypted SMS (short message service). The GT-SIMPAY technology is a path-breaking, disruptive innovation capable of facilitating the creation of an uncontested blue ocean market that will enable less educated and even the base-of-the-pyramid, unbanked population to consume services hitherto exclusive to more affluent consumers. GT-SIMPAY can be aptly defined as a frugal innovation, as its services are developed to fit the specific needs and requirements of retail markets and are delivered cheaply to give the financially vulnerable population opportunities for consumption. It is a transformational tool for redefining banking among the general populace and continues to captivate the imagination of many people. Today, our customers do not need to come to the bank to perform many banking transactions, and they can even buy electricity and pay bills from the comfort of their homes.

Peeping into the future….

Through GT-SIMPAY, the bank is making a notable difference in providing customers with the service platform to self-bank, pay bills and purchase airtime. The next phase of the GT-SIMPAY revolution is transformational, through which the lives of the banking population and the currently unbanked population will be positively impacted. The GT-SIMPAY mobile-wallet feature enables customers to send money from their accounts to beneficiaries’ mobile-money accounts operated by Global System for Mobile (GSM) telecommunications companies. The beneficiaries can thereafter cash out from mobile-money agents. Mobile money has wider coverage than banks do in the country and is accessible in locations too remote for banks. This feature provides customers with the platform to send money to families in locations without a bank presence.

GT-SIMPAY is an innovation that can produce in Sierra Leone impact similar to that of M-PESA, a mobile payment solution that today has been embraced by half of the population of Kenya. With GT-SIMPAY, prospective customers will be able to open bank accounts instantly through their mobile phones and receive their account numbers immediately. The feature also permits bank agents to open accounts for customers, upload all of their details and relevant documents remotely, with the customer receiving the account number immediately. This is the ultimate financial-inclusion booster that eliminates paper and facilitates efficiency in service delivery.

GTBank (SL)’s plan through GT-SIMPAY is to include persons who have been disenfranchised by diminished purchasing power from accessing the modern card-payment system. The card platform will enable our MasterCard debit card to be used for payments using the SMS-enabled POS and mPOS (mobile point-of-sale) terminals deployed at merchant locations. This will afford the low-income population the ability to enjoy the same banking service currently affordable only to the higher-income banking population.

Soon to be rolled out is the e-cheque. This is a feature that allows customers to send money to friends and family who do not maintain accounts with GTBank (SL).  With the e-cheque code generated and sent via SMS to them, beneficiaries can through an ATM either deposit e-cheques into their accounts or cash them out. It won’t be long before tomato and onion sellers at the popular Abacha Street market in Freetown will be able to accept non-cash payment through our Scan-to-Pay QR (quick response) feature. This is the ultimate cashless-banking facilitator.

It is worthwhile mentioning that GT-SIMPAY recently received recognition from the Asian Banker Excellence in Retail Financial Services, through which it was awarded the “Best Mobile Initiative, Application or Programme in West Africa for 2019”, firmly placing Sierra Leone on the regional digital-banking product map.

To reinforce its commitment to the delivery of banking products and services tailored to meet the diverse needs of its growing customer base, promote financial-inclusion objectives and minimise customer-service pain points, the bank plans to roll out by the middle of the year another digital mobile product called *3737#, which has been very successful in Nigeria since its launch in 2016. *3737# is built on USSD (Unstructured Supplementary Service Data) GSM communication technology that is used to send texts between a mobile phone and an application program in the network. With *3737#, customers will be able to perform banking transactions such as transfers to all banks in Sierra Leone, check account balances, open a GTBank (SL) account, buy airtime, pay bills and lots more from their mobile phones.

We at GTBank (SL) are indeed bringing the nation into a new world of banking.

It’s Time to Get Smart about Artificial Intelligence

Is Your Bank’s Client Portal Prepared For The...

Anti-Money Laundering Act is a Wakeup Call for...

To What Extent Have Recent COVID-19 Challenges Stymied...

The Unstoppable Rise of Fintech-as-a-Service

The Outlook for the Global Battery Market

Why Banks Deserve More Credit for Their ESG...

Is Your Bank’s Client Portal Prepared...