Top Posts
Data Fabric: Simplifying Data Management in an Increasingly Data-Reliant World
Is There a Digital Currency on the Horizon for the...
Eurozone Inflation Soars to a Record 8.6 Percent in June
Why Fintech Has a Role to Play in the Cost-of-Living...
Global Military Spending Hits a Record High
Could Big Tech’s Iron Grip on Digital Advertising Soon Come...
Home Finance Risky Lending Worries US Capital-Market Watchdogs
Finance 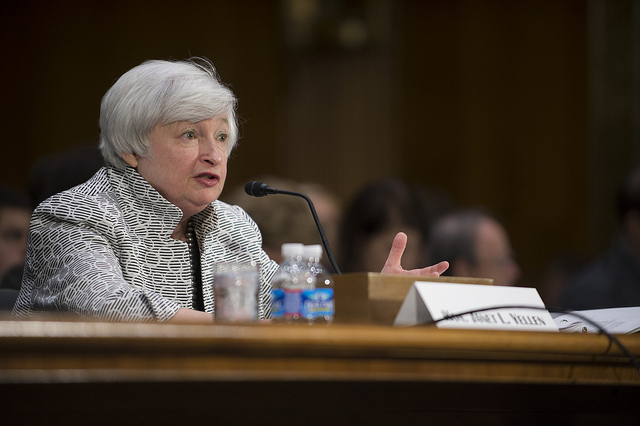 With interest rates still low, US banks are seeking to improve their returns by increasing risky investments in low-grade corporate debt. David Dayen from the Fiscal Times cites Fed Chairwoman Janet Yellen, who warned against the practice, saying there were already “pockets of increased risk-taking” discernible in the market that needed more attention from regulators and possibly “a more robust macroprudential approach”. The Office of the Comptroller of the Currency has also voiced concerns about these developments, including lowering underwriting standards when it comes to specific loan products.

A record-high proportion of newly issued corporate bonds are below investment grade, and yet investors are flocking to them in huge numbers. Last year alone, they bought as many leveraged loans as they had bought during the 15 years from 1997 to 2012. This is striking, but perhaps even more striking is the fact that demand is so huge that it has brought the spread between these risky loans and risk-free bonds to a record low. A further factor complicating the situation is the operations expansion of hedge funds and similar financial-services providers. Non-banking entities are offering an increasing number of services that have traditionally been the prerogative of banks. Now hedge funds and other alternative lenders are among the providers of high-risk loans, and they are not as strictly regulated by capital-market watchdogs, which gives them a wider berth in taking on risk. Yet they are still subject to regulation, and this could curb the risks associated with high-risk bonds.

In answer to the question that these facts invite (what is to be done?), Dayen suggests that the most obvious solution, of raising interest rates, may not be the best. Raising interest rates, he says, citing economist Paul Krugman, would keep the economy depressed, and that is not a wise move. Instead, the direct oversight of the market by regulators and their readiness to intervene whenever risk starts to accumulate to uncomfortable levels could be a winning strategy. The only problem with that is to make the regulators in question—the Securities and Exchange Commission and the Commodity Futures Trading Commission—aware of their increased importance and braver in using the tools at their disposal, which were created by the Dodd-Frank Act.

The SEC, for instance, has been criticized for being too slow in drafting proposals for reforms, missing deadlines and eventually failing to put into practice whatever ideas it may have had in this area. What’s more, the commission has been reluctant to tighten the rules for credit agencies, despite the latter’s contribution to the financial crisis. Most recently, the SEC was panned for leaving loopholes in regulation aimed to curb derivatives trading by the foreign branches of US banks.

The CFTC, on the other hand, has been strict in producing regulation; but ever since Tim Massad took the helm from Gary Gensler, the agency has been focusing on making concessions to the banking industry. What the CFTC needs, says Dayen, is more data on derivatives markets in order to be able to assess the risks inherent in them more accurately. This, however, could hardly be done with the funding the watchdog receives, which amounts to $205 million. In comparison, the market it is supposed to regulate is worth hundreds of trillions of dollars.