Top Posts
Enabling the Drive Toward Green Finance with Technology
Why Have Tin Prices Struggled in 2022?
The Devil We Thought We Knew
How China Has Managed to Avoid the Inflation Bug
Are Your Bank’s Digital Marketing Metrics Meaningful?
Identifying Beneficial Ownership: A Regulatory Conundrum
Home Finance Russia’s Economic Recovery
Finance 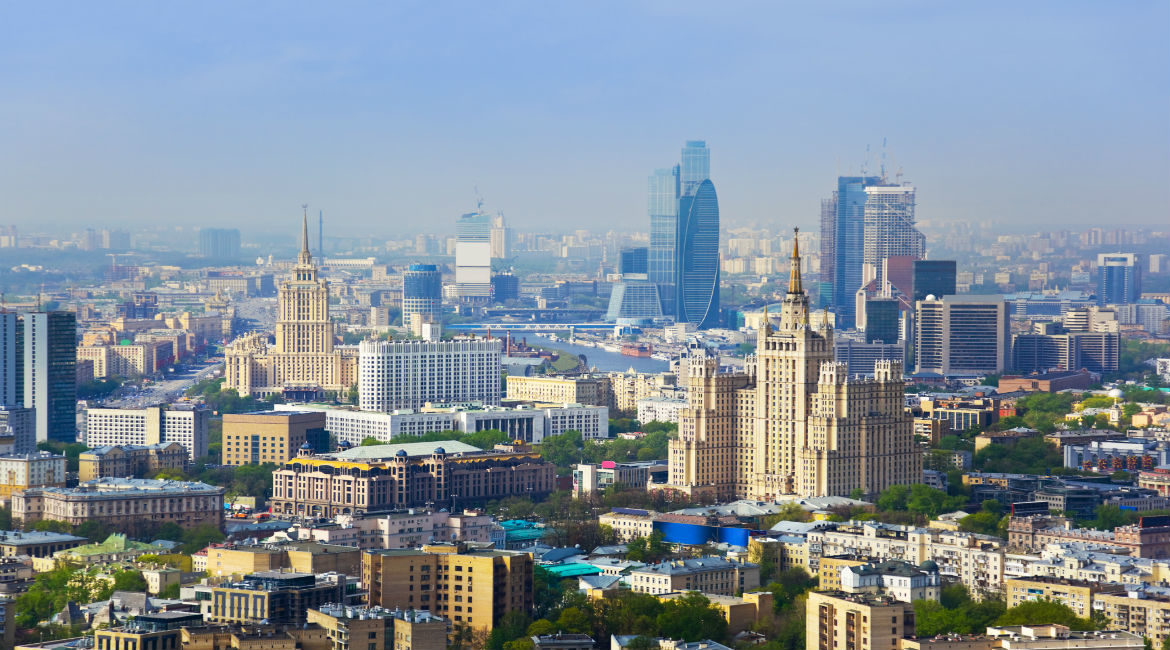 According to official figures, Russia’s economy experienced a minor but surprising contraction in November. The country’s Ministry of Economic Development observed that gross domestic product (GDP) shrank by 0.3 percent from November 2016 levels, which stands in stark contrast to the 1.5-percent growth that was being predicted by economists. Weak industrial output, which fell by 3.6 percent on an annual basis, was held chiefly responsible for the disappointing performance.

The economic ministry blames the weakness in the industrial sector on the agreement Russia made with OPEC (Organization of the Petroleum Exporting Countries) to curb its crude production in order to bolster commodity prices, as well as the warmer-than-usual weather that weighed on both domestic and foreign demand for natural gas. As such, the ministry has revised its 2017 growth figures for the Russian economy; whereas previously GDP was predicted to have grown by 2.2 percent during the year, it is now expected to be in the 1.4-1.8 percent range. This may well be achievable given that second- and third-quarter growth figures were respectively recorded at 2.5 percent and 1.8 percent—a far cry from the quagmire Russia’s economy was in just one year earlier. 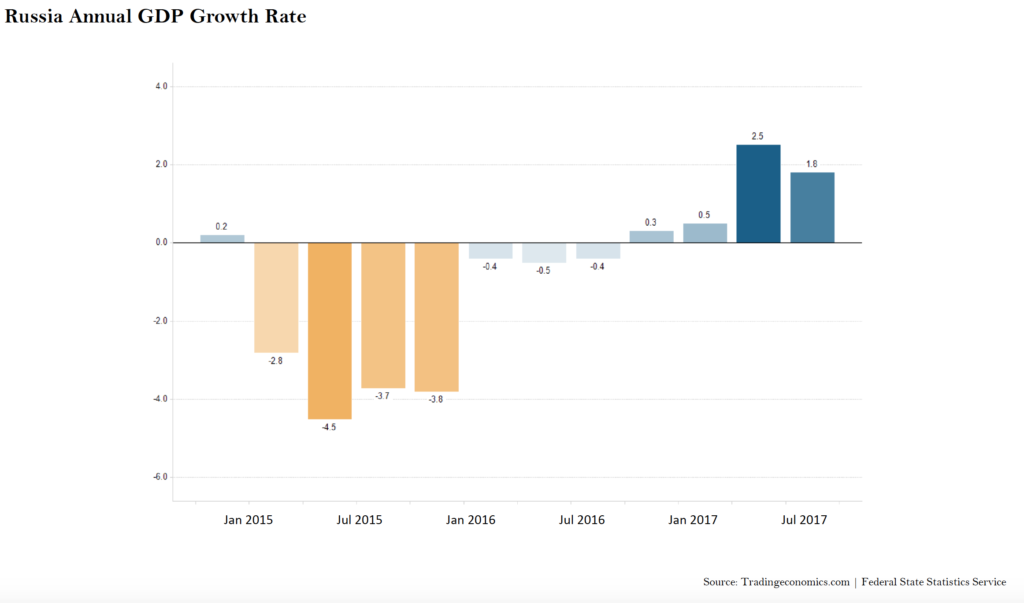 Indeed, it has been proven to be a remarkable turnaround from the dark days of 2015 and 2016, when Russia experienced a deep recession that was initially triggered by a massive 50-percent decline in oil prices, which sent exports of natural resources (accounting for more than 70 percent of the country’s total exports) tumbling, and which in turn induced a sharp plunge in GDP. During this time, Russia also experienced severe weakening of the ruble, inflation surging to 17 percent, interest rates increasing to double digits, and around one-fifth of all consumer loans ending up as nonperforming. With sanctions severely crippling Russian state-owned companies in particular, moreover, borrowing became considerably more challenging, while a substantial number of investors fled the country in pursuit of a more stable climate.

Since then, the central bank has managed to consistently bring interest rates down—it is now currently below 8 percent—while the ruble has managed to stabilise and now remains fairly range-bound against the dollar, trading mostly between 56 and 60, which is much stronger than 2015 levels when it was briefly trading in excess of 80. Inflation has also been dramatically brought under control, with prices rising by just 2.5 percent year-on-year during the most recent few months. With these factors stabilising, therefore, the Russian economy managed to return to positive growth in 2017. And with global demand strengthening, as well as oil prices firming, Russia’s economy suddenly appears to be on an uptick, with a brighter future now expected.

That said, with November’s somewhat surprising contraction, the recovery seems far from set in stone. Indeed, JPMorgan Chase’s recent assessment of the situation is that the country in fact slipped back into recession during last year’s final quarter, with analyst Anatoliy Shal observing in mid-January that the economy “lost momentum in the second half after a very strong first half”, but that the recent weakness “comes as a surprise”. The bank also points to weakness in two specific industries as explanation for the downturn—its diminishing re-armament programme is thought to have led to a drop in production of transport equipment, and a radiation leak in November may have impacted the country’s overall nuclear-fuel and base-metals output. Shal believes that although both factors have little impact on the broader macroeconomic environment, “their impact can be prolonged, thereby keeping the over-year-ago comparisons depressed in the coming months”.

Looking forward, moreover, many pitfalls continue to lurk, which suggests that Russia’s overall situation remains decidedly fragile. For example, it was recently estimated that foreign investors withdrew almost $1 billion from the Russian economy last year, with the pace of withdrawal increasing more recently as $126 million was taken out during the week prior to Christmas. The flight to safety is largely in anticipation of fresh US sanctions, which are due to be implemented in February. In turn, Bank of America Merrill Lynch is now predicting a marked depreciation of Russia’s currency.

Furthermore, the bail-outs of the country’s second-largest and fifth-largest private banks—Otkritie and B&N, in August and September, which jointly constitute more than 5 percent of the banking sector’s total assets—underlines just how weak the banking system remains. It also tests the extent to which the central bank can keep rescuing ailing private lenders, who continue to find it difficult competing against their state-owned peers. Indeed, even the state banks themselves are finding operating conditions far from agreeable; last year’s third quarter, for instance, saw the debt owed to the finance ministry and the central bank of one of the country’s biggest financial institutions, VTB Bank, grow by 296 billion rubles, with its net debt totalling 907 billion rubles. On the whole, the entire banking sector remains under pressure, a condition that seems to have its roots in the liberal lending practices of the industry prior to the period of recession and sanctions.

Today, Russia prepares for the re-election of President Vladimir Putin in March, an event that already seems a foregone conclusion given that his most threatening political opponent has been banned from taking part in the vote. Putin is convinced that Russia’s gloomy economic performance of recent years is now firmly in the past, and has been persuading factory workers of late that the economy is “on the upswing”, as evidenced largely by the narrower than expected budget deficit, as well as growth in gold and foreign-currency reserves. He also recently announced that Russia’s 13-percent profit tax on capital transferred to Russia from abroad will be scrapped, while the amnesty on penalties for Russian businesses that fled during the 2014 crash will most likely be extended. And in what seems politically motivated at least in part, the government is reportedly discussing a proposal to boost government spending to levels last seen when Putin ran for re-election back in 2012. Such an injection would very likely boost economic growth in the short- and medium-term.

But in truth, both significant upside and downside risks remain. As the World Bank asserted in its November report “Russia’s Recovery: How Strong Are Its Shoots?”, upside risk will likely come from “stronger-than-expected growth in large, advanced economies and hence higher Russian exports other than crude oil, which is limited by the OPEC+ agreement on production cuts”. On the downside, meanwhile, “a significant drop in oil prices, a sudden tightening of global financial conditions and possible additional negative impacts from the expansion of sanctions” all remain possible. The report also cites banking-sector frailties and a significant gap between real wages and real disposable incomes as potential threats to Russia’s prosperity on the domestic front. As such, while Russia holds an undoubtedly more secure macroeconomic position today than it did in 2015 and 2016, the future remains far from certain; and that means 2018 will be a pivotal year along the country’s path back to resuming normal service.

Deutsche Bank and GFT – a Tale of Innovation and Collaboration, Transforming IT Operations and Culture