Top Posts
Challenges Remain, But There Are Opportunities to Be Had in...
Interview with Mr. Olukayode Pitan, Chief Executive Officer and Managing...
Commodities Outlook for 2023
The Value of Cash in a Time of Crisis: How...
The US-Africa Leaders Summit: Fostering a Closer Relationship with the...
Three Key Sectors in Which to Invest in 2023
Home Contributors Short- and Medium/Long-Term Outlook for Construction in the United States
ContributorsFinance 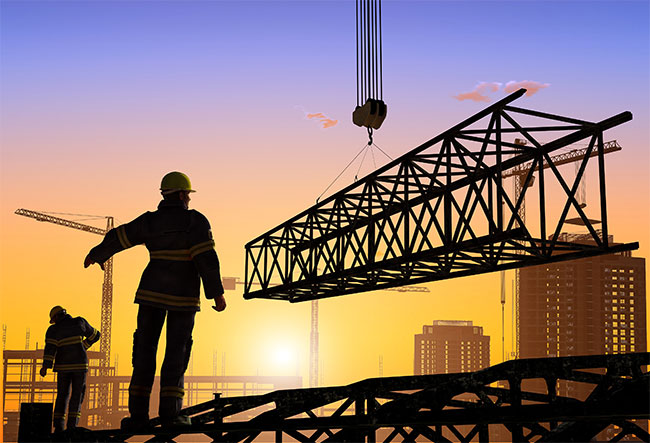 The construction industry of the United States began 2020 with solid growth and high hopes. That changed quickly as the COVID-19 pandemic dug ever deeper into the US economy, and now the industry is facing a slow and uneven recovery.

Contractors on balance were very optimistic at the end of 2019 about their prospects. In an annual survey of member firms that the Associated General Contractors of America (AGC) released in mid-December, contractors were asked if they thought the dollar value of projects available on which to bid would be greater or less in 2020 than in 2019. For all 13 structure categories in the survey, more respondents said the market would expand than shrink. (AGC members include roughly 6,500 general contractors, nearly 10,000 specialty contracting firms and more than 11,000 suppliers of construction equipment, materials and services. The companies perform every type of construction other than single-family homebuilding.)

Government data showed the industry started the year in good shape, probably aided in some cases by unusually mild winter weather across much of the country. Seasonally adjusted employment in January and February increased by a combined 79,000, the largest two-month gain in two years. Construction spending in the first two months combined increased 8 percent from the same period in 2019, spurred by a 13-percent jump in single-family construction, an 11-percent rise in public construction and a 1-percent increase in private nonresidential spending.

The good times ended abruptly in March. Construction employment declined by 29,000 from February, the largest one-month decrease in more than six years.

As governors and some mayors shut down more and more businesses beginning in mid-March, construction was largely spared in most locations—at first. Most states adopted a federal Department of Homeland Security definition of “essential” activities that explicitly listed numerous types of construction and specialty contractors. However, the definitions were interpreted differently in various states, and some states adopted progressively narrower definitions of permissible activity.

More significantly, construction clients (“owners” in contractors’ terminology) steadily increased the number of projects they halted or canceled. In a survey that AGC conducted March 17-19, 28 percent of contractors reported that an owner had halted a current project or canceled one that had been expected to start within 30 days. By the time of the survey conducted April 20-23, 50 percent of respondents reported that a current project had been halted, and 28 percent said that an upcoming project had been canceled, some as far out as June or later.

Project terminations were slightly offset by a modest increase in new or accelerated work. In the late-April survey, 18 percent of respondents reported winning at least one additional or expedited project. Most involved medical work, such as hospital remodeling, screening and testing facilities, or laboratories. In addition, a smattering of states allowed highway contractors to work longer hours or close more lanes to take advantage of much lighter road traffic.

The industry was quick to apply for—and receive—loans under the government’s Paycheck Protection Program (PPP). These loans, which were intended to help businesses with 500 or fewer employees retain staff, became available on April 3. Within a few days, the full $349 billion authorized by Congress had been committed. More of those dollars went to construction firms than to any other industry. In AGC’s survey, 44 percent of respondents reported having received PPP funds by April 23, while another 30 percent had applied and were either awaiting funding or had been told that no more money was available. (President Donald Trump signed a bill that replenished the funding on April 24.)

Nevertheless, the same survey revealed that respondents overwhelmingly thought additional federal legislation was needed to help the industry—not surprising, perhaps, since the PPP loans did nothing to generate new orders or prevent further cancelations, and the money could be used for only payroll, utilities, rent and interest on mortgages and pre-existing loans. (The loans can be written off—turned into grants—if employers retain or add employees and meet other conditions.)

Contractors especially favored the enactment of funding for infrastructure investment, followed by the creation of a fund to cover pandemic-risk insurance and business and employee continuity and recovery. However, as of late April, there was no consensus in Congress as to what additional relief should be enacted.

What, then, are the prospects for the construction industry? In the immediate future, it appears likely there will be more layoffs as the number of project cancelations mounts. Layoffs will be offset only slightly, and temporarily, by short-term new and expanded projects and PPP loans.

There will be, at best, a limited number of new projects to fulfill surging demand for faster deliveries to homes of goods ordered online and possibly to re-orient supply chains to consumers and away from closed hotels, restaurants, stores and offices. The burgeoning demand for home-delivered video-conferencing, work, educational and entertainment services may bolster already robust orders for construction of data centers and faster build-out of 5G and other connectivity facilities. However, these are relatively small construction segments.

As the economy begins to reawaken, construction is likely to be a lagging sector. Owners, whether businesses, institutions, or governments, are likely to put most types of construction far down on their priority lists. Many businesses may never reopen, particularly in the retail, restaurant, hotel and travel-related categories. Other firms that may have planned to expand will instead find they no longer have the funds, creditworthiness or, perhaps, customer bases to justify new construction. And demand for office construction may remain on a permanently lower growth path if employers decide they can function permanently with fewer workers in the office. However, there may be a small boom in office remodeling as companies try to provide more social distancing after years of squeezing workers ever closer together.

All private institutional or not-for-profit categories have been battered by the pandemic and may be years away from resuming construction. Hospitals have incurred extra expenses to prepare for and treat COVID-19 patients while having to cancel elective surgeries and discourage emergency-room visits, two lucrative income sources. Colleges and universities are facing huge uncertainties as to how many students will enroll in the fall. If classes resume late or must be held remotely, there will be a significant loss of revenue from tuition, room and board, and athletics. Meanwhile, their endowments and capital campaigns, which pay for much campus construction, have suffered from the steep stock-market declines. Cultural institutions such as theaters and orchestras have been devastated by cancelations of ticket sales and fundraising events.

State and local governments are incurring major unbudgeted expenses at the same time that nearly all revenue sources are declining precipitously. Because these governmental units must generally balance their budgets annually, they will be cutting any expenses they can. In many cases, this will mean construction will be postponed or cancelled, since it’s easier to defer a project that hasn’t broken ground than to lay off employees or cut payments to individuals.

But many public works are funded by particular revenue streams that are segregated to varying degrees. Highway, bridge and tunnel projects are often funded by only fuel taxes, vehicle registration fees or tolls. States have been projecting 30-to-50-percent declines in fuel-tax receipts and even greater decreases in toll-road revenues. As a result, there are likely to be similar cutbacks in new project awards until road usage resumes at prior levels, unless the federal government boosts its contribution to state highway construction.

Airport construction, previously a hot category, is funded largely by aircraft-landing fees and gate rentals, revenues from taxes and rents charged on airport parking, retail sales and hotels, and a passenger facility charge. All of these revenue streams have shrunk to a trickle, in some cases no more than 10 percent of previous levels. Consequently, airport expansions and renovations are likely to be slowed, with some gate and runway additions cancelled if passenger traffic remains subdued.

The largest public category, apart from highways, is schools. Unlike university construction, it is likely that primary- and secondary-school construction (including a large amount of renovation and expansion of older city and inner-suburb schools) will return to former levels fairly soon. The pandemic has left the number of school-age children nearly unchanged. And the principal funding mechanism for schools, property taxes (rates in the United Kingdom), has probably been less affected than income, sales or dedicated excise taxes.

In sum, construction may have held up longer than many sectors once the pandemic hit. But the industry’s recovery will also take much longer, while some segments may not get back to early-2020 spending or employment levels for many years.

Basel IV: What Will Be Its Impact on Europe?

Good evening! This is a very interesting and useful article for me. Due to the crisis and the pandemic, many construction companies were also affected, and it would be nice if the state supported its citizens more during the pandemic. It is in their own interests, many companies have closed forever and will not be able to bring taxes to the treasury of the country. Thank you for sharing this information, good luck!