Top Posts
How Gamification is Catapulting Digital Banking to the Next Level
Challenges Remain, But There Are Opportunities to Be Had in...
Interview with Mr. Olukayode Pitan, Chief Executive Officer and Managing...
Commodities Outlook for 2023
The Value of Cash in a Time of Crisis: How...
The US-Africa Leaders Summit: Fostering a Closer Relationship with the...
Home Finance South-South Trade and Its Implications for the World Economy
Finance

South-South Trade and Its Implications for the World Economy 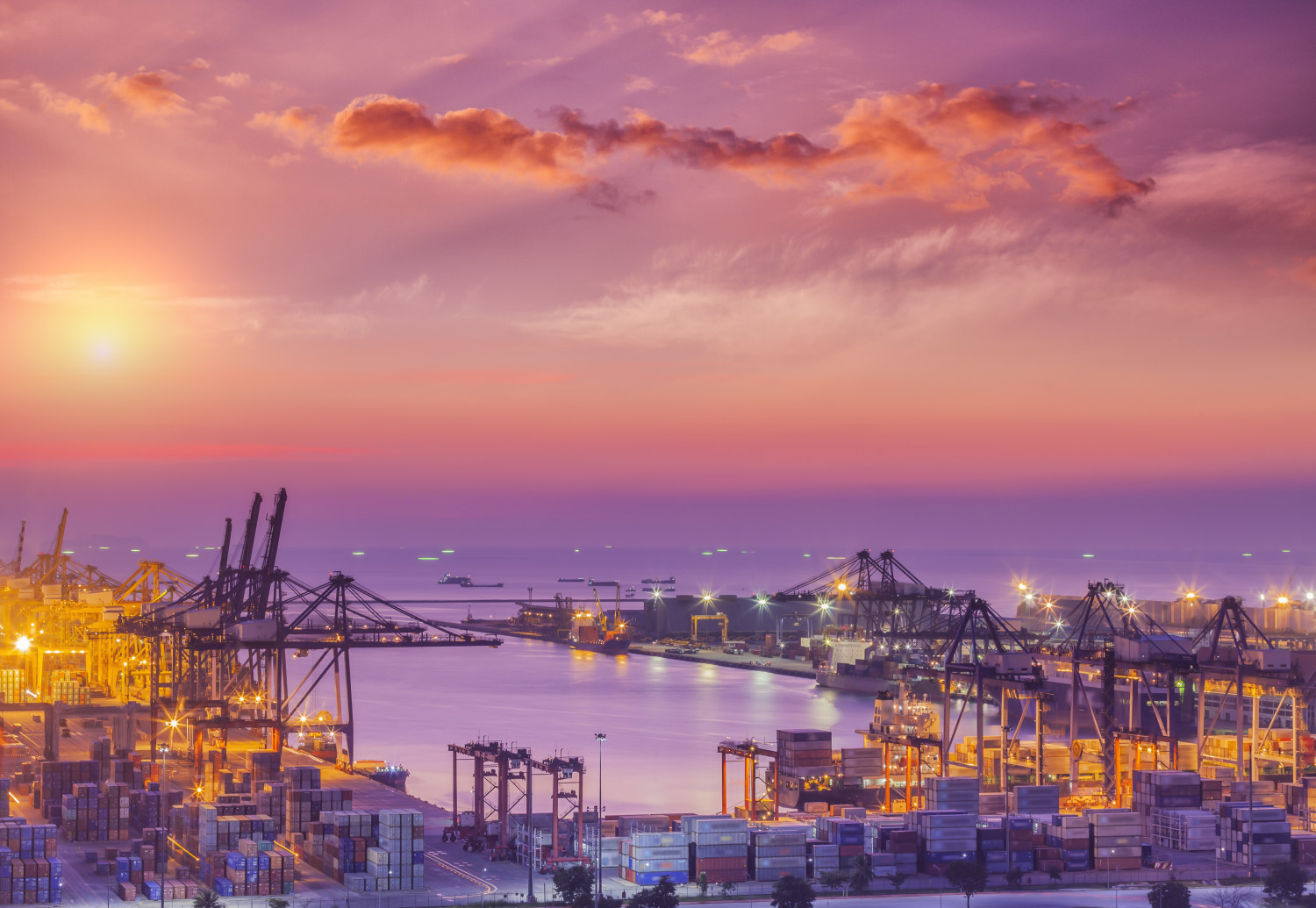 Developing countries’ joint trade profile has changed drastically in the last two decades. Developing economies accounted for almost half of the world’s merchandise exports in 2014, as compared to less than a third in 2000, and even less in the late 90s. Large emerging economies, in particular China and to a lesser extent India, have been the main engines of this growth. China almost tripled its share of world exports between 2000 and 2012.

A key element of this increasing share of developing countries in international trade has been the rapid growth in South-South trade—that is, trade with and amongst developing countries. In the last decade, South-South trade has outperformed both world trade and South-North trade. South-South trade in goods amounted to about US$5 trillion in 2013, which corresponded to about a quarter of world goods trade. It has been an important element in the overall growth of trade in the last decade, especially in helping revive the global economy after the financial crisis of 2009.

The increasing importance of developing countries and South-South relationships is also reflected in foreign direct investment (FDI). FDI flows to developing economies reached a record high of US$681 billion in 2014, constituting 55 percent of world FDI flows, as compared to less than 20 percent in 2000.

The surge in South-South trade and related investment is closely linked to another significant development in world trade, namely the international fragmentation of production in the context of global value chains (GVCs). Technological progress, particularly in information and communication technology, and falling trade costs have fostered the slicing up of the production process into ever-finer tasks and its geographic fragmentation across the globe.

As a consequence, trade within global value chains, which is typically measured in terms of either trade in value-added or in intermediate goods, has increased dramatically over the last decade. Here, too, the contribution and participation of developing economies has been significant. When measured in value-added terms, more than half of goods and services exports took place within value chains.

In terms of trade in intermediate goods, the prevalence of GVCs becomes even more visible. Intermediate-goods trade accounted for more than US$7 trillion in 2013, representing a share of about 40 percent of goods traded, whereas primary, capital and consumer goods each accounted for slightly less than US$3 trillion.

The second feature of South-South trade in GVCs, and also in Southern exports more generally, is their continuing reliance on primary commodities, in particular oil, gas and coal, and petroleum products. This is particularly the case for developing countries in Latin America, Africa and the Middle East. Primary products account for about a third of exports in both South-South and South-North trade.

Table 1 shows the evolution of export prices for primary commodities since 2011. Energy prices, including oil, have been hit hardest. Prices have fallen by around 40 percent since the beginning of 2014. The decline in the prices of minerals and metals was slower, but they were also quoting 40 percent lower in 2015 as compared to 2011.

Source: WTO Secretariat based on IMF data
Note: Period averages calculated from IMF indices based on dollar prices. The quarterly figures are not seasonally adjusted.

After riding the wave of increasing prices in the last decade, commodity-rich developing economies now face the challenge of keeping exports up. Figure 1 shows the development of quarterly exports of five commodity-exporting developing countries during the last four years. The exports of all five countries fell by more than 20 percent during the last four years, with oil-exporting economies such as Nigeria and Saudi Arabia taking the hardest hit due to the price plunge in oil since the second half of 2014. 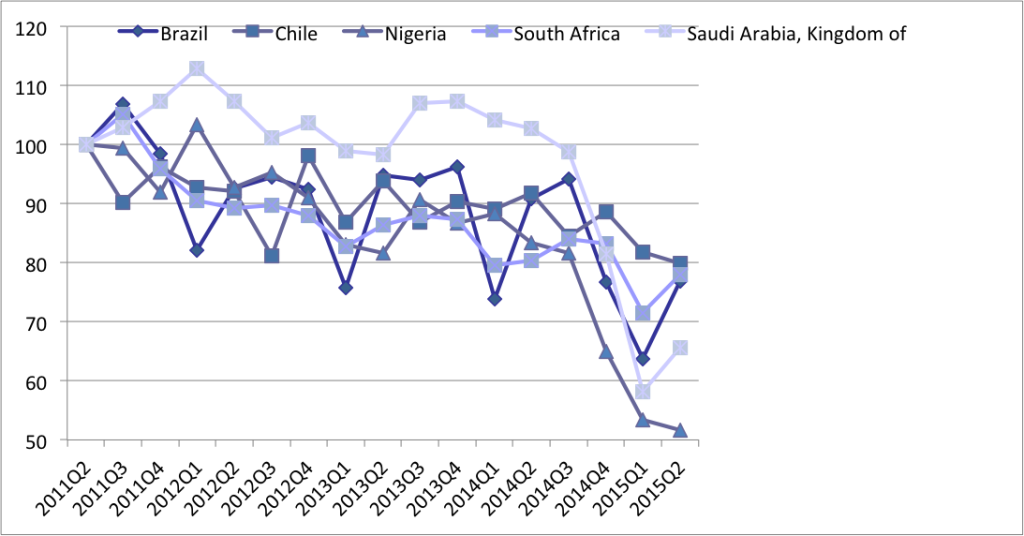 An interconnected world, while hugely advantageous, also comes with its share of problems. For instance, the economic slowdown in China is being transmitted to other countries, including developing countries, because of the increasing interdependence of trade through value chains. There is a certain risk that a prolonged Chinese slowdown and its transmission effect on other developing countries will have a negative impact on the world economy.

Policymakers in developing countries, therefore, face the difficult question of how to sustain their exports. When it comes to trade policy, policymakers should, at least, pursue the following four avenues to bolster South-South trade, and trade more generally.

(a)    An important element that could significantly contribute to helping sustain trade growth is the implementation of the WTO Trade Facilitation Agreement (TFA). The TFA, which was agreed upon by WTO members at the Bali Ministerial Conference in 2013, aims at lowering the costs of shipping goods across borders by simplifying customs procedures. According to estimates by the OECD (Organisation for Economic Co-operation and Development), the implementation of the TFA can reduce worldwide trade costs by between 12.5 and 17.5 percent. The gains from the implementation of the TFA in terms of trade-cost reductions and increases in exports are generally estimated to be highest for developing countries. Since the implementation of the TFA will lower the fixed costs associated with trading, it can help developing countries diversify their exports in terms of both products and markets. For instance, recent research estimates that countries in Sub-Saharan Africa could experience an increase of up to 16 percent in the number of products exported by destination and an increase of up to 35 percent in the number of export destinations by product.

(b)    Another area with great potential for developing countries is the further development of e-commerce—that is, the sale of goods or services over the Internet. E-commerce can benefit firms from developing countries and South-South trade in a number of ways. E-commerce can facilitate and increase the participation of firms from developing countries in GVCs. It increases market access and the reach of small firms and improves market efficiency. While the goods still need to be physically shipped, e-commerce drastically lowers the information and transaction costs of international trade. However, in order to foster electronic commerce, policymakers in developing countries will need to upgrade ICT (information and communications technology) infrastructure and improve regulatory frameworks, including that relating to online payments and financial transactions.

(c)     Regional integration and the development of regional value chains is another major factor in sustaining trade growth for developing countries. As discussed earlier, South-South trade has been driven by regional value chains in East Asia. Even though lacking China as a nearby production hub, developing economies in Africa, South Asia and also Latin America should pursue regional integration and trade liberalization to create stronger production and trade linkages among themselves.

(d)    Finally, a significant outcome at the forthcoming Tenth WTO Ministerial Conference in Nairobi on December 15-18 would further strengthen the multilateral trading system and create new market-access opportunities, which, too, would bolster South-South trade. It is the first time that a WTO Ministerial Conference is being held on the African continent, making it all the more important to progress on the development dimension of the multilateral-trading system, including steps that would help South-South trade.

Clearly, South-South trade has been a driver of world-trade growth for more than a decade and is today a very important component of world trade. The recent economic slowdown in some emerging economies, however, also reveals the dependencies and limitations of trade among developing economies. In order to continue to grow, South-South trade needs to become more diversified in terms of both markets and products. Governments should not miss out on the policy options they have on hand to make South-South trade a more stable engine of trade and economic growth.

Go to top
ABOUT THE AUTHOR
Shishir Priyadarshi, one of the Directors of the World Trade Organization, is an international expert on trade and development. He heads the development division of the WTO, whose mandate is to facilitate work on all trade related developmental issues in the organization.

A significant part of Mr. Priyadarshi’s responsibilities extends to taking care of the work relating to the developmental dimension of the Doha negotiations, especially in so far as they relate to addressing the concerns of developing countries. In particular this also includes work relating to the global initiative on Aid for Trade, including the implications of such assistance on trade and investment.

Mr Priyadarshi has over 35 years of national and international experience. He has worked closely in formulating and implementing developmental programmes all over the world and has been instrumental in helping some of the weaker and more vulnerable countries enhance their gains from the multilateral trading system. He has worked closely with business and the private sector in many developing countries.

He has written a large number of papers, primarily analysing, assessing and detailing the concerns of developing countries in the context of global trade, especially South-South trade. He is a visiting faculty in a number of universities and business colleges.

Money on the Go: the Banking App Problem