Top Posts
How Gamification is Catapulting Digital Banking to the Next Level
Challenges Remain, But There Are Opportunities to Be Had in...
Interview with Mr. Olukayode Pitan, Chief Executive Officer and Managing...
Commodities Outlook for 2023
The Value of Cash in a Time of Crisis: How...
The US-Africa Leaders Summit: Fostering a Closer Relationship with the...
Home Finance Stagflation, Reincarnated
Finance 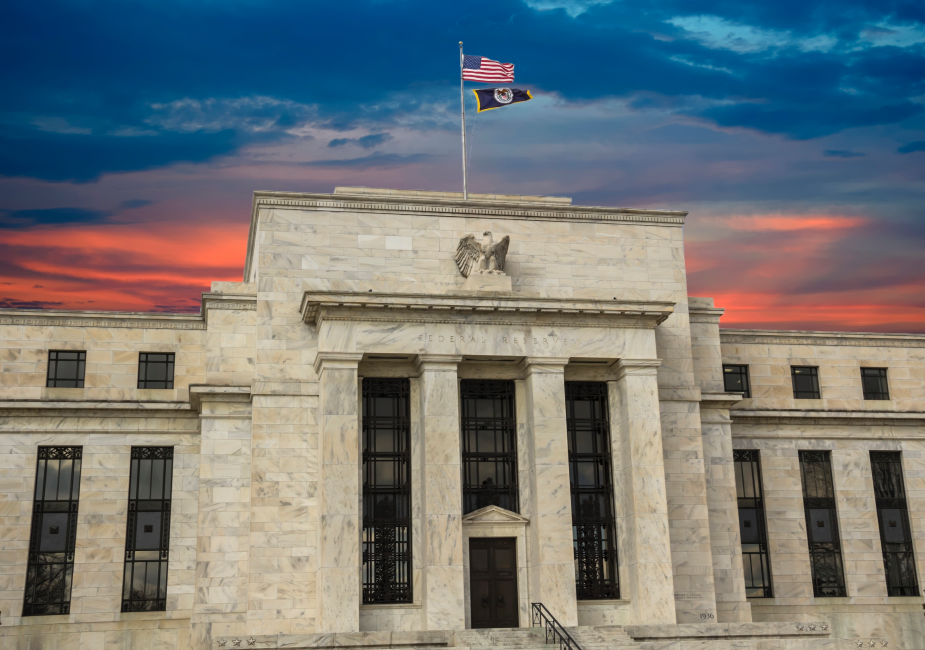 The combination of stagnation and inflation, known as stagflation, is a dreaded one. It was last seen in its serious 1970s incarnation, which required the drastic, lengthy actions of policymakers to quash it through the Volcker experiment1 of the early 1980s: Interest rates were raised to record highs to quell inflation, but this worsened stagnation into becoming an outright recession. Therein lies the delicate balance for macroeconomic policymakers in dealing with full-blown stagflation: One part of it (stagnation) requires more stimulus, while the other (inflation) needs less. Now, almost half a century later, we are starting to experience relatively milder stagflation. What policymakers do—fiscal authorities and central bankers—will largely determine whether this mild stagflation worsens or improves. The remedy will require the fine use of the various instruments at their disposal, not just a broad brush of raising or lowering both types of stimulus. In the meantime, investors ought to be cautious, aware of the risks that these policies will not go smoothly. The last experience of such a policy dilemma occurred half a century ago.

Origins and persistence of stagflation

The supply-side problems were not confined to stalled manufacturing processes or supply-chain issues. There is an additional important angle that is not often discussed, despite it being critical to the functioning of labour markets:

This is in addition to a historical (but largely justified) fiscal stimulus putting substantial income in people’s hands, making them less willing to work; however, this factor is easily reversed, as is indeed starting to happen now. More difficult to tame is the wealth effect that consumers have felt, which I will discuss next.

Bubble territory, with implications for the real economy

The inflation we have now is not just for goods and services but also asset prices, whether for houses, (used) cars, shares. Consumers who own any of these will feel wealthier and less inclined to work, often also borrowing against their newfound wealth as collateral on the implicit assumption that the value of this wealth is stable—I will not even include cryptocurrencies in the discussion! Historically low interest rates have fuelled a bubble in asset prices for too many years, now exacerbated by a large but temporary fiscal stimulus, and these prices will not remain elevated. I expect substantial corrections on stock markets to be imminent, with valuation metrics being the highest they’ve ever been and disconnected from the state of the economy, both current and future. An example of such a metric for the US is included in the figure below, which depicts in logarithms real gross domestic product (GDP) and the S&P 500 Index from 1950 Q1 (first quarter) to 2021 Q2 (second quarter); the latter took off without regard for the former, a divergence that has always been corrected eventually. Predicting stock-market dynamics using the patterns of the two series in this graph is part of my joint research4 with Prof. Gabriel Talmain, and relies on more than just the simple ratio of the two. 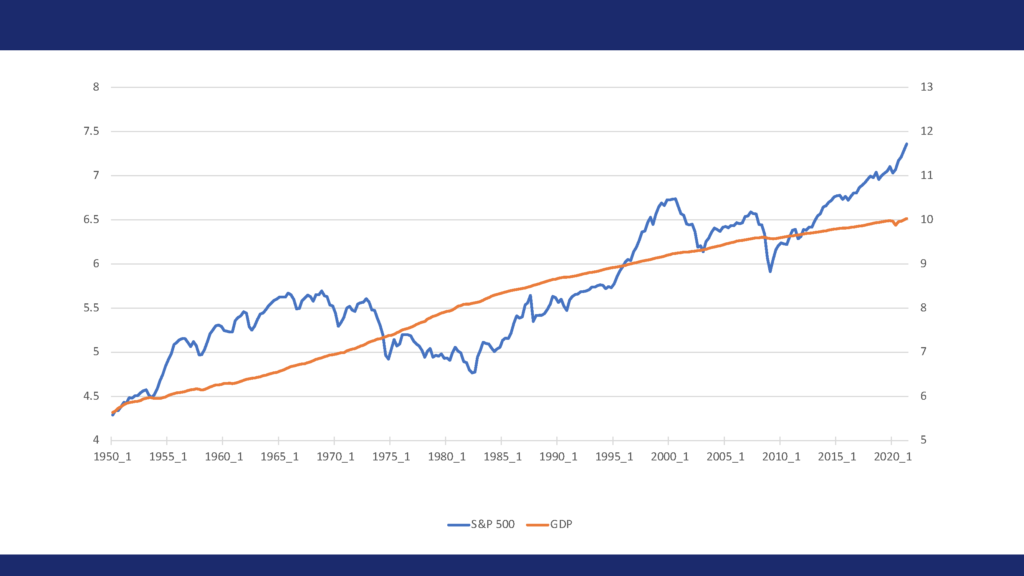 The value of the firms in an economy cannot outgrow by double-digits the economy’s average growth in the long run. It may certainly do so for short periods, as we see in the graph, but not indefinitely. We could have used the broader Russell 3000 Index (3,000 stocks) or Wilshire 5000 Total Market Index (almost 3,500 stocks) instead of the S&P 500, but the largest firms’ valuations dominate these indexes; for example, the top four firms5 alone account for a quarter of the total market. This is why a specialized index such as the Russell 2000 focuses on small-caps by skipping the largest 1,000 companies, but it represents less than 10 percent of the total Russell 3000.

The bursting of this bubble will have repercussions on the real economy through not only wealth effects but also the debt or leverage that was increased as a result of this temporarily inflated wealth. Recent estimates of the share of retail investors that will be particularly affected range from 15 to 25 percent of the total traded—not a small percentage at all.

Central banks should have begun withdrawing stimulus long ago. I gave a lecture at the Fed (US Federal Reserve) in Washington, D.C., three years ago and suggested that its stimulus be phased out gradually without delay, which did not happen. Furthermore, COVID disruptions should never6 have been tackled with more monetary stimulus: Credit availability was never an issue and could not have resolved any of the COVID-induced disruptions. This part of the stimulus only helped pour more fuel on the fires of asset-price inflation and speculation. At first, quantitative easing (QE) went mostly into the financial sector and was largely confined to it. This has now changed, as it has leaked into the real economy, as discussed above.

When inflation lasts for longer than a year, it gets factored into the indexation of various products and wages, giving it self-sustaining persistence. We are now at a crucial stage to rein this in promptly before we have to resort to recession-inducing actions to stop inflation.

ABOUT THE AUTHOR
Karim Maher Abadir is Emeritus Professor of Financial Econometrics at Imperial College London and a member of the editorial boards of various international academic journals. He started his academic career as a Lecturer in Economics at Lincoln College, Oxford. He then joined the University of Exeter as a Senior Lecturer in Statistics and Econometrics, then Reader in Econometrics. He held the Chair of Econometrics and Statistics 1996-2005 at the University of York, jointly between the Departments of Mathematics and Economics, then the Chair of Financial Econometrics 2005-2017 at the Business School of Imperial College London. He is credited with having predicted the timing of the 2008 recession a year in advance and the different timings of the recoveries in various Western countries.

2021 Volkswagen ID.3 Versus Nissan Leaf: Which EV Is Electrifying the Market?