Top Posts
Banks Remain Uniquely Vulnerable to Sophisticated Cyber-Attacks
Western Banks Willing to Accept the Short-Term Pain of Russian...
Why the US Is Ramping Up Its Presence in Somalia...
How Technology Is Helping to Solve Global Supply-Chain Issues
UK Inflation Climbs to Fresh 40-Year High
Extended Reality and the Metaverse Are Leading Financial Services into...
Home Finance Thailand: Outlook, Opportunities and Challenges
Finance 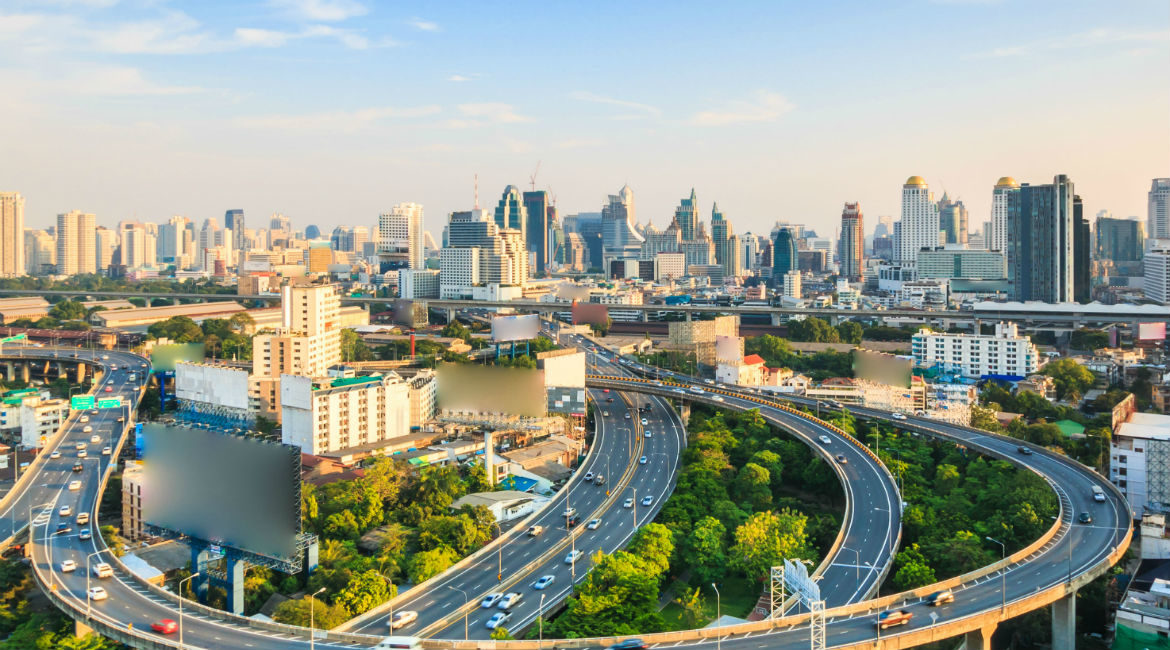 Outlook for the Thai economy

The Thai economy is on course to grow by only about 3 percent in 2019, down from a 4.1-percent growth rate in 2018, due to a combination of external and domestic factors. As an export-reliant economy, Thailand, along with other countries in the region, is feeling the impacts of a global economic slowdown and uncertainties related to the worsening trade relations between the United States and China, and recently between Japan and Korea.

For the first half of 2019, our merchandise exports contracted by 4.1 percent year-over-year compared to the same period last year. This reflected weak global demand as well as the slowing electronics sector. The trade war between the US and China may have limited direct impacts on Thailand, but the indirect effects—from a weaker global economy, a collapse in world trade as well as a deteriorating business sentiment—have exacted a heavy toll on our export performance.

Tourism, another major driver of Thailand’s growth, has sputtered since the third quarter of 2018, prompting the government to waive the visa-on-arrival fees for visitors from many countries, including China and India. The measure was meant to end in early 2019 but has since been extended to boost the sector until the end of October 2019. As a result, the Tourism Authority of Thailand has lowered its 2019 visitor-arrival target to 39.9 million from 41 million.

Moreover, for the past several months, Chinese tourist arrivals, which account for the largest proportion of total visitor arrivals, have taken a nosedive—shrinking by 7.1 percent year-over-year in June. As such, the private sector has called for another visa-fee waiver to cover the 2020 Chinese New Year. The plunge in the Chinese tourist arrivals, to a large degree, has reflected the uncertainty over the Chinese economy stemming from the US-China trade war, and the extent of the Thai baht appreciation against the Chinese yuan.

Mother Nature has also started to wreak havoc for agricultural production in Thailand this year. We are currently facing the worst drought in a decade. Thailand, a top producer of rubber and one of the largest exporters of rice and sugar, will likely see a significant drop in agricultural production. This will undoubtedly hurt the country’s farm incomes, and as about 30 percent of the Thai workforce is in farming, private consumption will be severely affected.

To add to Thailand’s economic woes, the Thai baht has continued to strengthen since the end of 2018, up by about 5 percent year-to-date against the US dollar—the best-performing currency in Asia. The strong baht has started to weigh heavily on our agricultural exports and tourism.

Several factors appear to have supported the strength of the Thai baht. Despite falling exports and softened tourist receipts, Thailand has managed to register a very healthy current account surplus of $17.4 billion for the first six months of the year (approximately 7 percent on an annual gross-domestic-product basis). Strong macroeconomic fundamentals, such as subdued inflation, low unemployment rate and fiscal stability, have further contributed to the appeal of the Thai baht. In addition, Thailand possesses strong external fundamentals—ample foreign-exchange reserves and manageable levels of external debt. Much to many investors’ surprise, the Thai baht has been labeled a safe-haven currency in the emerging market (EM) space.

Last December, the Bank of Thailand (BOT) increased the policy interest rate for the first time in eight years to 1.75 percent from 1.50 percent. The Monetary Policy Committee (MPC) then cited the need to build policy space to counter future economic downturns and curb financial stability risks from prolonged periods of exceptionally low interest rates (the historical low was 1.25 percent in 2009). Even in February of this year, some members of the MPC voted to increase the policy interest rate.

Given the slowing economy and the unrelenting strength of the Thai baht, some, both in the government and the private sector, have been calling for the Bank of Thailand to lower its policy rate. Yet, so far, the BOT has resisted the calls to become more dovish. The MPC only recently turned neutral in its monetary-policy stance.

With regards to the strong baht, the BOT has recently introduced measures to curb speculation, such as lowering the available limit of non-resident baht accounts and reducing the amount of BOT bond issuance. Furthermore, the BOT has warned that there are many more measures at their disposal to deal with currency speculators. 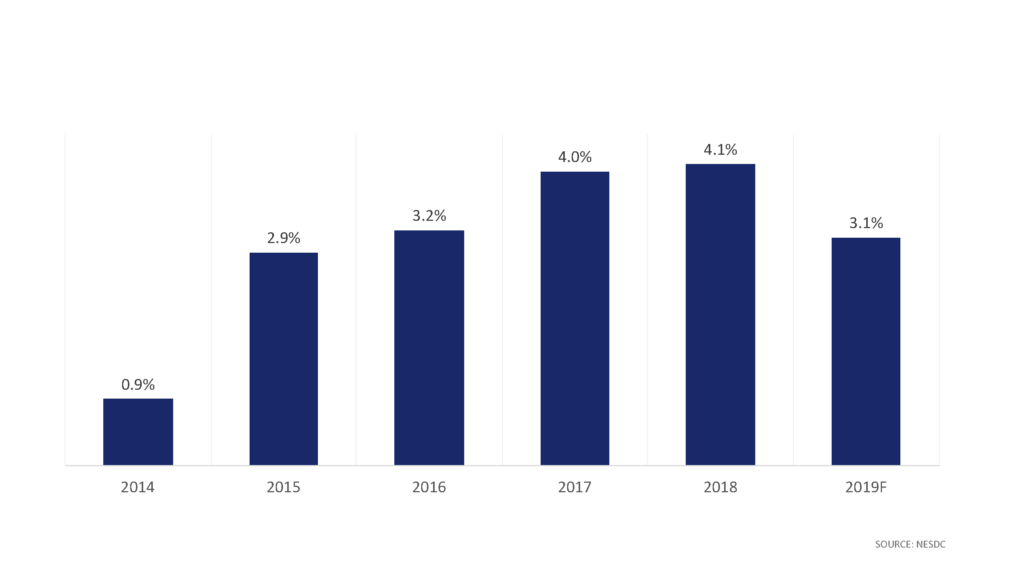 However, I think it is a matter of when, not if, the BOT will have to cut the policy rate. The BOT cannot go against the grain for much longer, given that several central banks in the region have lowered their policy rates this year, and the US Federal Reserve has begun its easing cycle and stopped its quantitative tightening. Some economists are predicting the first rate cut to come as soon as the August MPC meeting. I reckon the BOT will try to stay put until the economic indicators turn out to be much worse than their projections. Currently, the BOT forecasts 2019 GDP growth of 3.3 percent and zero-percent growth in exports. Both of which are looking increasingly optimistic. Therefore, the pressure on the BOT to cut is mounting.***

Thailand held a general election for the first time in nearly a decade in March of this year, and in July the new cabinet was formed. The new government is, nevertheless, a coalition government with a razor-thin majority—leading some political analysts to predict a short-lived term for the government. Regardless, the government has its work cut out for it in terms of stimulating the economy in the near-term as well as tackling the longer-term structural challenges.

Much more importantly, though, the government was able to retain some of the key members from the previous administration, including the prime minister and his economic team. This ought to bode well for policy continuity, especially economic policies. As such, we expect the key economic reforms to continue, together with ongoing massive infrastructure investments around the country.

The government will have to address short-term issues such as softening tourism and lower farm incomes. We expect the government soon to roll out support measures to boost consumer spending, such as the Shop-for-Thailand scheme in which spending is tax-deductible, and farm subsidies for rice farmers who have been badly affected by the drought, for instance.

Within 10 years’ time, over a quarter of our population will be over 60 years old. The demographic dividends from which Thailand has benefitted over the past few decades are coming to an end. During the election campaign, many political parties advocated for maternity welfare programmes, through which generous benefits were promised to eligible mothers during pregnancy and for each child up to six years old. The details will be forthcoming from the government.

Also, Thailand’s economic model for growth over the past three decades is also losing steam. Our labour costs are no longer cheap compared to those of our neighbouring countries. While Thailand is also a major car-manufacturing hub, currently producing around two million cars a year, the threat of the electric-vehicle (EV) disruption is arriving in the not-too-distant future. Labour-intensive industries have also relocated elsewhere. Then, the natural question is: What can Thailand do to address these challenges, and will Thailand be stuck in the middle-income trap for the foreseeable future?

The policy continuation of economic reforms, therefore, is of utmost importance. The previous government laid the groundwork for many crucial economic reforms, such as introducing policies to tackle income and wealth inequality, and modernizing laws and regulations to be more business-friendly.

Additionally, the government has determined to reform the tax system in Thailand, in which the currently narrow tax base of only 4 million people out of the entire population of 69 million has to be addressed. This will likely include measures to counter widespread tax evasion by the private sector and measures to tax the rich on their assets, such as land holdings and inheritance. Further, the government has promised to lower the personal income tax by 10 percent, whereas the rate for the top bracket is now 35 percent. The lower and more competitive tax rates would be welcomed by both the current taxpayers and the businesses that wish to attract foreign talent to come to work in Thailand. 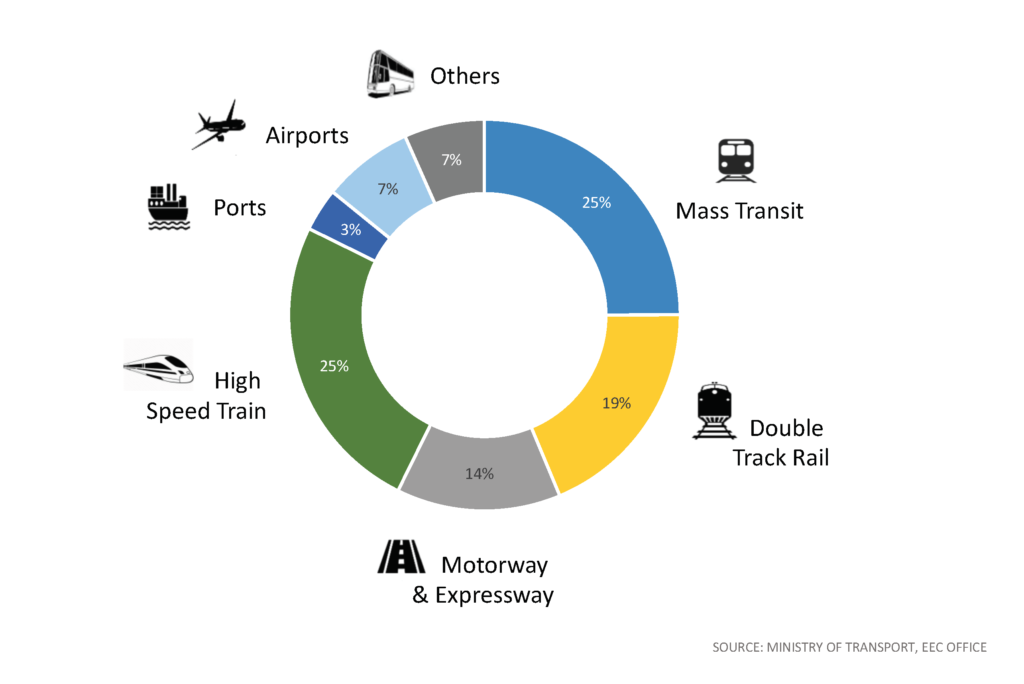 The key initiative laid out by the previous government is the Eastern Economic Corridor (EEC). This is an upgrade to our existing industrial base known as the Eastern Seaboard, where Thailand’s industrialization began over three decades ago. The crucial element under the EEC is a massive overhaul and modernization of our infrastructure—sea, air, land and rail networks. Bidding for several projects has begun, and some are close to being awarded to the bidders. One example of many key projects is a high-speed rail network to connect our three commercial airports, from Bangkok down to the EEC area.

A massive infrastructure investment worth about $70 billion is due to take place in Thailand over the next seven to ten years. Upon completion, this will significantly improve the connectivity of Thailand to our fast-growing neighbours: Cambodia, Laos, Myanmar and Vietnam (CLMV). This will not only open up Thailand to new markets but also improve logistics in the region to form a comprehensive supply chain for the ASEAN (Association of Southeast Asian Nations) Economic Community.

Moreover, with the improved infrastructure network, we will be able to benefit from connectivity to China’s investment under the Belt and Road Initiative (BRI), which, if delivered, is set to change the face of Asia, and indeed the world.

I have managed to touch on only a few of the ongoing reforms and infrastructure investments, but there are also the new, targeted industries that will receive various benefits and subsidies from the government. The new industries will be based on innovation and technologies, including the likes of smart robotics, EVs, smart electronics—just to name a few. Therefore, despite the aforementioned short-term headwinds, I strongly believe that, with ongoing economic reform, Thailand as an investment destination should not be overlooked.

***International Banker Footnote: After this article was written on August 2, 2019, the Monetary Policy Committee of the Bank of Thailand at its meeting held on Wednesday, August 7, voted five to two to cut its benchmark interest rate by a quarter-percentage point, from 1.75 to 1.50 percent, in an effort to promote economic growth. This rate cut came as a surprise to many analysts, who had expected the committee to leave its key rate unchanged. Future cuts are possible, depending on domestic and global conditions.

The Evolvement of Sanctions and the Role of Technology