Top Posts
Challenges Remain, But There Are Opportunities to Be Had in...
Interview with Mr. Olukayode Pitan, Chief Executive Officer and Managing...
Commodities Outlook for 2023
The Value of Cash in a Time of Crisis: How...
The US-Africa Leaders Summit: Fostering a Closer Relationship with the...
Three Key Sectors in Which to Invest in 2023
Home Finance The Circular Economy Is Crucial to Achieving Sustainable Development Goals
Finance 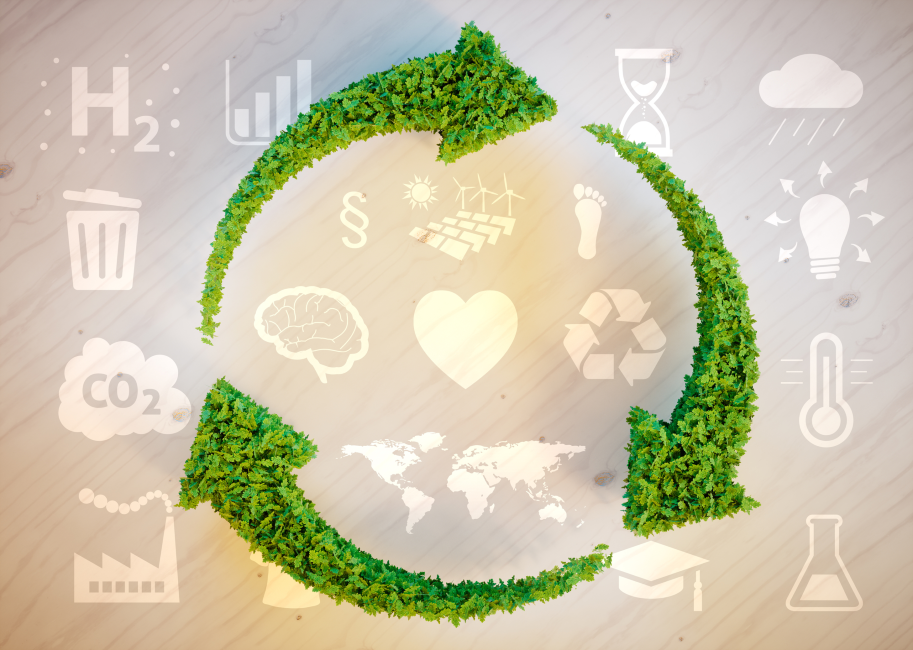 In early November, Prague unveiled its plans to transition to a circular economy over the course of the decade. Circular Prague 2030 details all the major initiatives the Czech Republic’s capital city will take over the next eight years to achieve this goal and, in doing so, become one of the latest to join a growing list of cities, countries, organisations, industries and even citizens keen to establish widespread circular economic models. But what exactly does this increasingly popular buzz-phrase constitute?

There are countless definitions of what exactly circular economy comprises. But broadly speaking, most class it as one in which resources are retained for as long as possible, such that society can extract the maximum value from their use both today and in the future through regenerative processes that extend their lives and, ultimately, their utilities. Compared to linear economies that are more commonly in existence today, circular economies offer more efficient uses of resources so that they are not simply thrown away after their current or immediate applications.

In other words, circular economies seek to eliminate the “take-make-waste” practice in production and consumption. “We must transform every element of our take-make-waste system: how we manage resources, how we make and use products, and what we do with the materials afterwards,” explained the Ellen MacArthur Foundation, which works to accelerate the transition to a circular economy. “Only then can we create a thriving circular economy that can benefit everyone within the limits of our planet.”

It should come as no surprise, then, that the goals for achieving circular economies are not dissimilar to those for sustainable development. The “Circularity Gap Report”, published by Circle Economy, an Amsterdam-based impact organisation aiming to accelerate the practical and scalable implementation of the circular economy, highlights many of those common goals as well as the price the world will pay for not implementing circular economies, particularly from a climate perspective. “If the coming decade is the decisive one for humanity’s future on earth, then 2021 is the year to ramp up our efforts to bring our goals into realistic reach and prevent the worst effects of climate breakdown,” according to the report, projecting that by combining the twin agendas of circular economy and climate mitigation, the planet can achieve the objective of a sub-2-degrees-Celsius world by 2032.

However, the report acknowledged that the global economy is currently only 8.6 percent circular, which has created a massive circularity gap. But this gap need only be closed by a further 8.4 percent—or roughly double the current global figure of 8.6 percent—to achieve this objective. That said, efforts to close the circularity gap have trended negatively in recent years. Whilst the “Circularity Gap Report 2020” disclosed that the global economy was only 8.6 percent circular, just two years earlier, it was 9.1 percent, meaning that things have become worse during that period. So, although it would require only double circularity to close the emissions gap by 2032, the 2021 report found that the globe remains hamstrung by outdated take-make-waste practices. “In adopting a roadmap packed with circular strategies, we can pave the way for the systemic transformations needed to course-correct the global economy—going far beyond the limitations of current policy and national climate pledges,” the report stated, also observing that while the current pledges would bring us more than 15 percent of the way, the circular economy would deliver the other 85 percent.

“The Circularity Gap Reports show the circular economy’s enormous emission mitigation potential and key role in achieving our climate goals, as well as the need for national and global action,” according to the Netherlands’ minister for the environment, Stientje van Veldhoven. “We need systemic change in how we use our resources, that goes beyond recycling and incorporates new business models, design and metrics. In order to fully understand our progress and identify specific action areas, we need a variety of coordinated metrics, including the Circularity Gap Report.”

So, how exactly can we make this crucial transition? Again, Circle Economy has separately mapped the various terms and definitions related to the circular economy that have been used by more than 20 organisations, including non-governmental organisations (NGOs), government agencies, academia and consultancies, as well as conducted an in-depth literature review to identify eight key elements most crucial to the circular economy:

The European Commission (EC) also adopted its Circular Economy Action Plan (CEAP) in March 2020 as one of the key components of the European Green Deal, Europe’s new agenda for sustainable growth. Measures under the CEAP include making sustainable products the norm in the European Union (EU); empowering consumers and public buyers; focusing on sectors that use the most resources and where the potential for circularity is high such as electronics and ICT (information and communications technology), batteries and vehicles, packaging, plastics, textiles, construction and buildings, food, water and nutrients; ensuring less waste; making circularity work for people, regions and cities; and leading global efforts on the circular economy.

“The EU’s transition to a circular economy will reduce pressure on natural resources and will create sustainable growth and jobs. It is also a prerequisite to achieve the EU’s 2050 climate neutrality target and to halt biodiversity loss,” the EC stated. “The new action plan announces initiatives along the entire life cycle of products. It targets how products are designed, promotes circular economy processes, encourages sustainable consumption, and aims to ensure that waste is prevented and the resources used are kept in the EU economy for as long as possible.”

And as far as Prague is concerned, efforts to build a circular economy will revolve around four key areas: agriculture and food, waste management, water management and construction. “There is a huge opportunity for Prague to make more efficient use of its resources, reduce its climate impact, and at the same time, boost innovation and create new jobs through the innovative circular solutions identified through the Circular Prague project,” Petr Hlubuček, deputy mayor of Prague, recently explained.

On an organisational level, meanwhile, the World Business Council for Sustainable Development (WBCSD), an organization led by the chief executive officers of more than 200 international companies and connections to 60 national and regional business councils and partner organisations, is among the leaders in driving the transition. In particular, its Circular Economy Program convenes more than 50 companies to co-develop solutions that unlock their full circular potentials, including creating new standards, tools, advocacies, insights and experiences to empower companies to make the shift. “A circular economy is fundamental to achieving our vision of more than 9 billion people living well within the boundaries of the planet by 2050,” the WBCSD stated, believing the transition lies in decoupling resource consumption and economic performance through information sharing, new business models, support for policies, science-based targets and value-chain collaboration.

With the circular economy so closely intertwined with sustainable development, then, it seems only logical that circularity is integrated into efforts and agendas to achieve the United Nations’ Sustainable Development Goals (SDGs) as early as possible. And with the global economy still on the road to recovery, it presents a unique opportunity to realise a new normal that places circularity at the core of production and consumption models. As such, the circular economy has never been a more important concept for the world to put into practice than it is today.

Low-Code and No-Code: Solutions that Are Solving Key Tech Challenges for Businesses