Top Posts
Why the Status of the Fifth-Largest Economy Is a Job...
Syrian Economic Outlook Dims as Internal Conflict, Resource Theft and...
Unwinding the Unconventional Monetary Policy in Japan
Three Significant Payment Trends in 2022
Recessions Hurt: Does the Data Show That the World’s Major...
Every Organisation Should Be Aware of Invoice Scams
Home Finance The Economic Implications of Banning Russian Fuel Imports
Finance 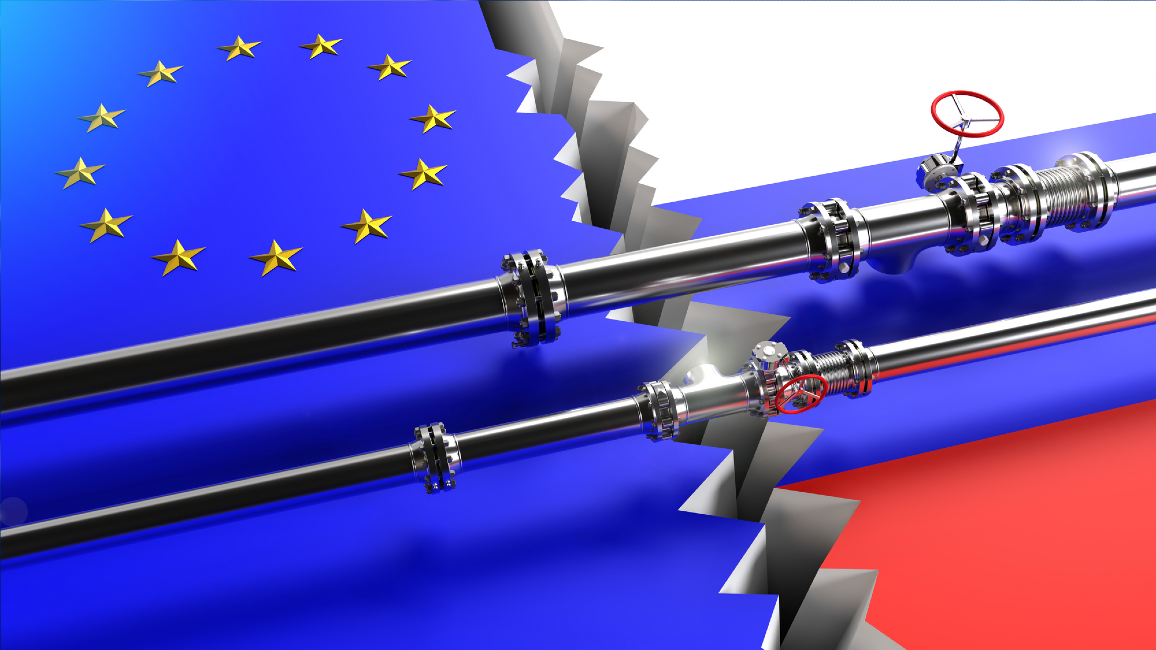 Europe is set to ban Russian oil imports, phasing them out completely by the end of the year. The move is being carried out to “maximise pressure on Russia, while minimising the impact on our economies”, the European Commission president tweeted whilst laying out the bloc’s proposal for its sixth round of sanctions. In 2020, Russian oil imports accounted for about 25 percent of the bloc’s crude purchases, according to Eurostat, the European Union’s (EU’s) statistics office, which thus underlines the mammoth task ahead for the EU in replacing this enormous quantity using alternative means. 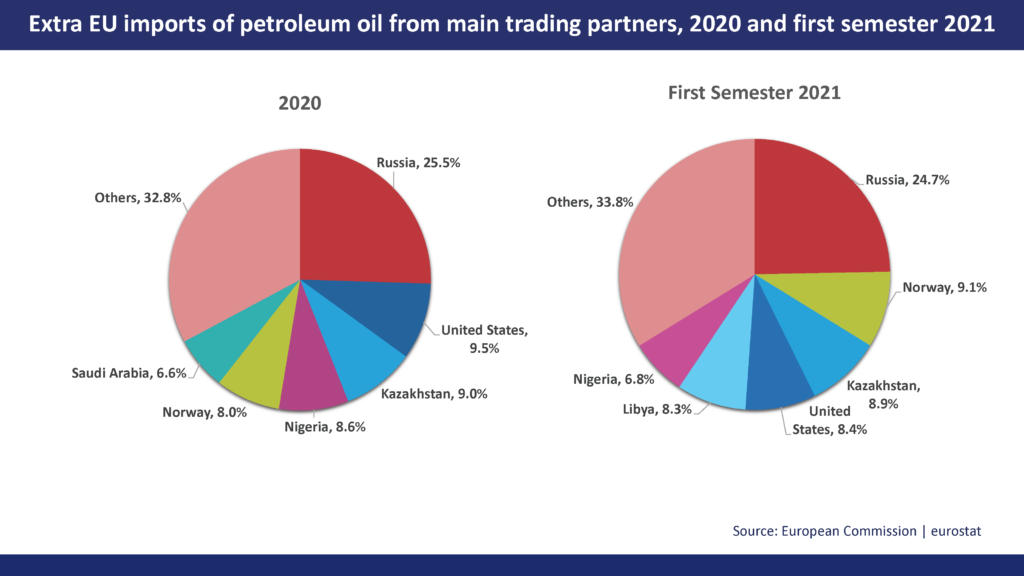 Just as important for Europe as Russian oil, the decision to continue allowing Russian gas should ease immediate concerns over the region’s fuel requirements. Indeed, Russian gas imports represented a hefty 40 percent of all gas consumed by the region in 2021. But there is a growing sense that Europe will also wean itself off Russian gas supplies, with reports confirming on May 5 that Germany, the single largest consumer of Russian gas, chartered four floating terminals to import liquefied natural gas (LNG) from elsewhere. Construction of Germany’s first domestically owned floating LNG terminal, which it hopes to complete in record time, has also begun at Wilhelmshaven in Lower Saxony.

Truth be told, the loss of expected future gas imports from Russia through the Nord Stream 2 pipeline will almost certainly have a profound economic impact in the near term on Germany and other European nations to a lesser extent. Nord Stream 2 has yet to commence commercial operations, despite its construction work having finished in September 2021. It was initially set to satisfy an enormous part of Europe’s energy needs; with an annual delivery capacity of some 55 billion cubic metres, it would have doubled the route’s capacity to 110 billion cubic metres when added to the existing Nord Stream system.

But the project had been opposed by the United States, Ukraine and other Eastern European countries from the outset over concerns that Europe would be overly reliant on Russia for its energy needs. Germany then suspended the certification process on February 22, one day before the US imposed sanctions against Nord Stream 2 AG, the Swiss-based company that built the pipeline. Such supply challenges have been instrumental in sending European gas prices skywards over the last six months, with prices more than 300 percent higher than a year ago.

Germany has been more vocal than other EU members in expressing concern over a blanket ban being implemented on Russian fossil-fuel imports, however, with Chancellor Olaf Scholz warning that such a move would send the bloc into recession. Given that more than half of the gas and coal Germany imports comes from Russia, as does a third of its oil imports, Scholz’s concerns are certainly understandable and explain why the EU is adopting a more gradual approach towards phasing out its exposure to Russia. “To do that from one day to the next would mean plunging our country and the whole of Europe into a recession,” Scholz warned on March 23, just before meetings with other EU leaders and a G7 meeting with US President Joe Biden. “Hundreds of thousands of jobs would be at risk. Entire branches of industry are on the brink.”

Indeed, should Europe eliminate its fuel reliance on Russia, it will need to source new supply lines quickly from elsewhere around the globe. This process has already begun in earnest, with recent reports of deals being thrashed out to import natural gas from other countries. The EU’s draft energy strategy principally seeks to boost its LNG imports by 50 billion cubic metres, increase shipments of pipeline gas by 10 billion cubic metres and, over the next eight years, add 10 million tonnes of renewable hydrogen as part of the European Green Deal’s ambitions to achieve climate neutrality by 2050.

It requires a combination of establishing new contracts and restructuring existing ones to accommodate this new demand. West African nations, such as Nigeria, Senegal and Angola, stand ready to offer LNG, while an agreement is almost finalised with the US to take on 15 billion cubic metres of additional LNG this year before upping that amount to around 50 billion cubic metres per year until 2030. More LNG will also be sourced from the Middle East, Europe hopes, with both Egypt and Israel ready to sign a trilateral memorandum of understanding to boost supplies to the region.

“Qatar stands ready to facilitate swaps with Asian countries,” the EC’s draft strategy also confirmed. “In terms of pipeline gas, Norway has already increased its deliveries to Europe, and both Algeria and Azerbaijan have indicated their willingness to do so.” Possibilities include raising the gas capacity from Azerbaijan through the Southern Gas Corridor to 20 billion cubic metres per year, while Japan and South Korea are also sending LNG cargoes to Europe. And through its energy stalwart, Reliance Industries Limited, India has reportedly begun to provide diesel-starved Europe with the refined middle distillate product. “The EU also needs to send consistent signals to the market to balance the short and medium-term needs with longer-term goals,” the strategy document added. “All this requires a much more coordinated gas policy to exploit the market and political weight of the union and developing a tool for a joint action.”

Clearly, Europe has various options to eliminate the shortfall brought about by banning Russian imports. It is also looking to boost its domestic energy-production capacity where possible. Nonetheless, such agreements will take time to come to fruition, and there will almost certainly be a shortfall whilst other fuel sources can sufficiently ramp up their supplies to offset the imminent losses. There is also the cost issue to consider, as importing LNG from distant facilities is bound to be more expensive than procuring gas through the Nord Streams. But it seems increasingly apparent that the region is determined to pursue this strategy. “We will remain united and support each other while phasing out Russian energy imports,” European Council President Charles Michel tweeted in late April.

Russia confirmed on May 5 that the onshore capacity designed to send gas through the Nord Stream 2 pipeline to Germany would instead be used for domestic needs. “Due to the fact that the Nord Stream 2 offshore gas pipeline is currently not in use, and taking into account the implementation of gas supply for consumers in northwest Russia, Gazprom has decided to use the excess onshore gas transmission capacity of Nord Stream 2 for the development of gas supply to the regions of northwest Russia,” Russia’s state-owned gas firm confirmed in a statement.

Gazprom has also reportedly reassured clients that they can keep paying for gas without breaching sanctions. According to Bloomberg, Gazprom has confirmed that a new order from the Kremlin on May 4 “clarifies the procedure” set out in the initial decree on rouble payments, whereby new orders in euros could be exchanged into roubles through accounts held at Russia’s National Clearing Centre (NCC-Central Counterparty National Clearing Centre), although whether this new order is sufficient to convince the EU that it would not violate sanctions remains to be seen. Russia already cut off gas deliveries to Poland and Bulgaria in late April after both countries refused to pay for their shipments in roubles, but reports suggest European companies continue to seek workarounds under EC guidance that would allow them to purchase Russian gas and comply with sanctions.

In determining the long-term economic impact on Russia of the West’s sanctions and its likely termination of fuel purchases, meanwhile, much will depend on the strength of Russia’s ties with its non-Western allies. Crude oil and refined petroleum products account for approximately three-quarters of Russia’s total export revenues, while natural gas adds a further 10 percent to that total (although it represents a major proportion of the fuel imported by the EU). As such, a total ban on gas by Europe would not particularly hurt Russian export revenues to any sizeable degree, whereas an oil ban would hurt Russia a lot more, especially seeing as the EU represents a significant chunk of Russian export value.

But if recent trends are anything to go by, other countries could well step up their buying of Russian fuel imports to fill the gap. With global benchmark oil prices having rallied massively since the outbreak of the conflict, Russia’s Urals crude grade continues to trade at a massive discount—around $35/barrel—which has thus enticed the likes of China and India to step up their own crude purchases from Russia.

A Financial Times article from May 4 reported a modest uptick in Chinese buying. “Shipbrokers and operators said that at least six supertankers—each capable of carrying up to 2mn [million] barrels of crude—have struck deals to consolidate cargoes of Russian Urals crude in Europe to ship to Asia, mostly to China but also to India,” the article stated. And in late April, reports revealed that in the two months since the beginning of the war in late February, India had bought more than double the amount of crude oil from Russia than it had in the whole of 2021, according to Reuters calculations. That said, India’s oil imports from Russia remain relatively low on an absolute basis, accounting for less than 2 percent of all its oil imports.