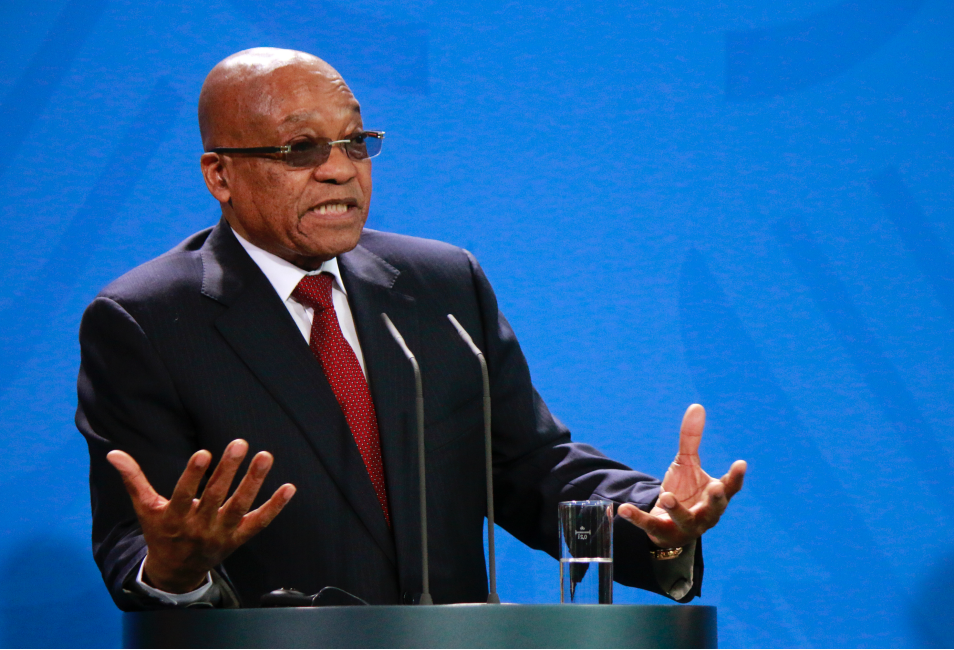 It has been labelled as South Africa’s worst episode of civil unrest since the days of apartheid. The rioting that occurred following the imprisonment of former President Jacob Zuma for contempt of court on July 7—specifically, for failing to show up for an official inquiry into his alleged corruption during his nine-year presidency—has been among the darkest chapters in the country’s recent history.

Although protests initially began with the destruction of property, looting and burning, the death toll rose to 337 by July 22. But while Zuma’s imprisonment was certainly the spark that lit the fuse, it’s apparent that South Africa’s deep-rooted economic problems played a significant role in precipitating much of the looting. The country endured its worst recession in a century last year as coronavirus-induced lockdowns weighed heavily on economic activity, forcing many businesses to shut down and leaving millions unemployed.

Indeed, South Africa’s unemployment rate rose to 32.6 percent in the first quarter of 2021, from 32.5 percent in the previous quarter, marking a new high since official figures were first recorded in 2008. And when expanding the unemployment measure to include those discouraged from seeking work, the figure increased to a staggering 43.2 percent of the labour force during the three-month period. As such, the rioting certainly hasn’t helped reverse this trend. “Many communities and workers are going to pay a huge price for this anarchy,” said the Congress of South African Trade Unions (COSATU). “Hundreds of thousands of jobs are going to be lost and vital community services are going to be severely disrupted by this brazen looting and destruction.”

Food insecurity in South Africa has also exploded over the last decade, with the 1.8 million citizens without enough food in 2008 more than doubling to 3.8 million by 2020, according to the United Nations’ Food and Agriculture Organization. And around 3 million more South Africans fell below the poverty line during Zuma’s reign between 2009 and 2018, with official figures showing that half of the country’s 58 million people were officially classed as poor. “The picture was bleak to start with,” Lise Korsten, co-director of the Centre of Excellence in Food Security (CoE-FS) at the University of Pretoria, recently told NBC News.

And the ongoing battle against the coronavirus has only compounded matters for South Africans this year. COVID-19 has now officially taken the lives of more than 75,000 South Africans, with some estimates putting this figure much higher. The country has experienced three pronounced waves of the virus, with the most recent Delta variant bringing with it new record daily case numbers in July and exposing the country’s wholly inadequate response to the pandemic. Indeed, only around 2 percent of the population had been vaccinated by mid-July, although there has been a modest acceleration in administering doses in recent weeks. Nonetheless, vaccination remains insufficient given the threat of further outbreaks.

It was against this clearly frustrating economic backdrop that riots were perhaps as severe and bloody as they turned out to be. The country’s gross domestic product (GDP) has failed to grow above 3 percent annually in 10 years, while total output is not expected to return to pre-pandemic levels until 2023. The violence thus reflects an economy that has been “stagnant for more than a decade”, according to Gerbrandt van Heerden, an analyst at the Johannesburg-based think tank the Centre for Risk Analysis (CRA). “A lot of the unrest that South Africa has experienced this year and before are connected to a failing state.” This perhaps explains why much of the violence occurred in the coastal provinces of KwaZulu-Natal (KZN) and Gauteng, which contains the country’s largest city, Johannesburg, as well as around one-quarter of the total population; both of these provinces are hugely important contributors to South Africa’s economy, accounting for nearly 50 percent of the country’s total GDP.

According to Khumbudzo Ntshavheni, acting minister in the presidency, the violence led to approximately 200 malls and 3,000 shops being looted, with a further 200 banks and post offices being vandalized. Figures from the South African Property Owners Association (SAPOA), moreover, put the total dollar cost of the riots at around 50 billion rands (3.4 billion US dollars) in terms of lost output. “It’s currently difficult to assess what the total cost of the unrest is because there are areas which are still volatile, particularly in KZN. However, the damage is likely to cost north of R20bn in KZN and the cost to the country is likely [to be] north of R50bn,” economist Thabi Leoka told the Financial Times. “The biggest loss, apart from the loss of lives, is the loss of jobs that many will incur because their places of work no longer exist.”

A group of loyalists to Zuma have been held chiefly responsible for instigating the attacks, with their main goal being to undermine the government of his successor, President Cyril Ramaphosa. Six people were arrested for inciting violence, with a number of social-media posts uncovered that encouraged protests and violence to be committed. “The unrest was orchestrated, instigated and planned…. It almost brought our country to its knees,” said Ntshavheni. Ramaphosa himself has since stated that the violence was planned, telling business leaders that the looting and attacks on food supply chains were part of a plan “to cripple the economy, cause social instability and severely weaken—or even dislodge—the democratic state”.

If true, then some might say that this plan was effective in achieving its aims. “To put this into perspective, retail trade and production accounts for about 20 percent of gross domestic product, or almost $70 billion, of which $14 billion may have been lost, according to estimates by local banks,” Robert Besseling, chief executive officer of political-risk consultancy Pangea-Risk, told CNBC in early August. “Moreover, the impact on poor communities will be disproportionate, since most looted stores and malls are close to townships. These communities will now struggle to find nearby groceries and supplies, even while Covid-19 lockdowns remain in place.”

The longer-term economic and financial implications could be even worse, especially if global investors start to consider South Africa as too volatile a destination for their funds. “There’s a cost, there’s been a lot of damage,” according to Ravi Bhatia, director at S&P Global Ratings. “You’ll have to rebuild. There is always a reluctance to invest unless you have security guaranteed.”

Overall, it is estimated that the unrest will likely shave about 0.7 percent off headline GDP growth in 2021, hit private consumption and slow the pace of economic recovery, according to the S&P Global Ratings’ report released on July 26. “If the unrest were to recur and last for a long time, this would further pressure the economy and potentially stifle the rebound,” the ratings agency added.

JPMorgan Chase, meanwhile, revised its third-quarter GDP forecast significantly downward on July 16 to a 3-percent contraction from its previous estimate of -0.5 percent and lowered its full-year prediction from 4.9 percent to 4.5 percent. “The wave of violence and looting has swamped Gauteng and Kwazulu Natal (KZN), two provinces that account for over half of South Africa’s GDP,” said Sonja Keller in a note to clients. “Some knock-on effects in terms of supply-chain disruptions are also increasingly evident as parts of the ports arm of state logistics firm Transnet and the country’s largest crude oil refinery Sapref temporarily shut down operations in KZN, risking delays to fresh produce exports.” And Deutsche Bank is anticipating 2021 growth to be 0.8 percent lower as a direct result of the riots.

Can South Africa dig itself out of this hole? According to the International Monetary Fund’s (IMF’s) representative for South Africa, Max Alier, who spoke to Bloomberg on July 23, authorities should focus their spending on offsetting relief measures; he also noted that deviations from the National Treasury’s projection that debt will peak at 88.9 percent of GDP in the 2026 fiscal year could put public finances on an explosive path. “This is a tragedy, but at the same time we can’t lose sight of the fiscal realities,” Alier said, adding that if any relief package can’t be fully offset, then the government must swiftly implement structural reforms that attract private investment, lift economic growth and create jobs. “The social support that is being discussed is a temporary band-aid solution,” according to Alier. “The ultimate solution is to create the conditions for people to get jobs.”

How COVID-19 Is Accelerating the Need for Omnichannel Payments