Top Posts
Challenges Remain, But There Are Opportunities to Be Had in...
Interview with Mr. Olukayode Pitan, Chief Executive Officer and Managing...
Commodities Outlook for 2023
The Value of Cash in a Time of Crisis: How...
The US-Africa Leaders Summit: Fostering a Closer Relationship with the...
Three Key Sectors in Which to Invest in 2023
Home Finance The Limitations of GDP as a Gauge of Nations’ Wellbeing
Finance

The Limitations of GDP as a Gauge of Nations’ Wellbeing 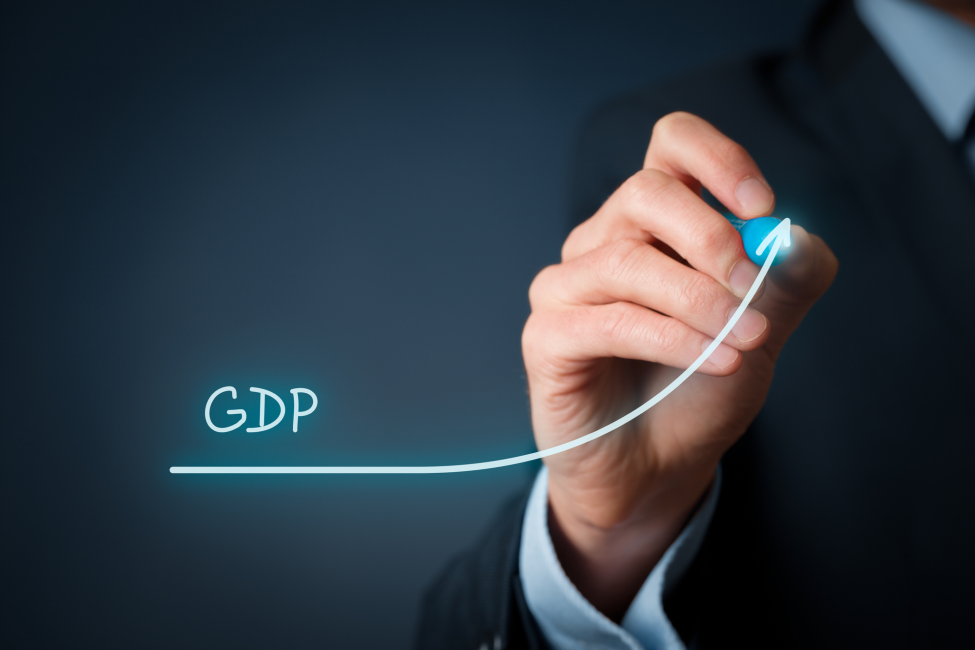 “It is only by having better metrics that truly reflect people’s lives and aspirations that we will be able to design and implement ‘better policies for better lives’.” Angel Gurría (José Ángel Gurría Treviño), secretary-general of the Organisation for Economic Co-operation and Development (OECD).

It is an issue that has gathered steam over the last decade or so and which will only seem to become even more embedded within the global consciousness as we move forward into the post-COVID era. Namely, are we relying too narrowly on gross domestic product (GDP) when trying to gauge the overall wellbeing of a nation? And if so, what can be done about it?

Throughout the world, GDP has been the standard-bearer for measuring economic performance for decades, if not centuries. The aggregate value of goods and services produced within a country over a given period, GDP’s primacy as the world’s leading economic indicator during this time has rarely been called into question. Even today, it continues to be easily the most widely adopted metric—and the most widely accepted one—for comparing economic wellbeing across nations. But truth be told, it remains far from being an accurate representation of standard of living, and as such, there is now growing support to adopt a more holistic approach towards this issue.

The 2008 global financial crisis (GFC), in particular, revealed a pressing need to capture more indicators of living standards and economic health so that thought-leaders and policymakers can more presciently warn of impending declines in the future. “GDP was humming along nicely, rising year after year, until the 2008 global financial crisis hit,” economist Joseph Stiglitz wrote in 2019 in The Guardian newspaper. “The global financial crisis was the ultimate illustration of the deficiencies in commonly used metrics. None of those metrics gave policymakers or markets adequate warning that something was amiss. Though a few astute economists had sounded the alarm, the standard measures seemed to suggest everything was fine.”

Indeed, Stiglitz himself was one of a handful of economists, alongside Jean-Paul Fitoussi and Martine Durand, co-chairs of the OECD-hosted High-Level Expert Group on the Measurement of Economic Performance and Social Progress (HLEG), to produce an in-depth report in late 2018 showing how the over-reliance on GDP as the yardstick of economic performance misled policymakers who did not see the 2008 crisis coming. “While GDP is the most well-known, and most powerful economic indicator, it can’t tell us everything we need to know about the health of countries and societies. In fact, it can’t even tell us everything we need to know about economic performance,” according to the report’s abstract. “We need to develop dashboards of indicators that reveal who is benefitting from growth, whether that growth is environmentally sustainable, how people feel about their lives, what factors contribute to an individual’s or a country’s success.”

It would seem that a growing number of countries have taken such advice onboard over the last couple of years, having reassessed the importance they once placed on GDP as the sole measure of wellbeing. In 2019, under the leadership of Prime Minister Jacinda Ardern, New Zealand offered up its first-ever Wellbeing Budget. “It’s a reality because while economic growth is important—and something we will continue to pursue—it alone does not guarantee improvements to our living standards,” the prime minister stated in the budget’s introduction. “Nor does it measure the quality of economic activity or take into account who benefits and who is left out or left behind.”

Indeed, the Wellbeing Budget itself explicitly stated that the country’s definition of success had been broadened to incorporate not only the health of its finances “but also of our natural resources, people and communities”. As such, it laid out five key priorities for funding under this new definition:

“The Wellbeing Budget is founded on the idea that financial prosperity alone is not a sufficient measure of the quality of life,” according to Michael Mintrom, academic director at the Australia and New Zealand School of Government (ANZSOG). Indeed, the 2019 Wellbeing Budget referenced over 60 indicators from the New Zealand Treasury’s Living Standards Framework (LSF), underlining the sheer depth of analysis that formed the basis for such a budget—the first of its kind.

Other countries have followed New Zealand’s lead since then, with Iceland and Scotland both joining forces with the South Pacific island nation—and later Finland and Wales—to establish the Wellbeing Economy Governments, which challenges the prevailing use of GDP as the main representation of a country’s success. In Iceland’s case, for example, it has cultivated a new set of social indicators, with Prime Minister Katrín Jakobsdóttir having highlighted the environmental devastation within the country, such as the disappearance of the Okjökull glacier, as being a huge motivating factor. A high rate of depression within the Icelandic population has also underpinned the need for Iceland to move beyond GDP and address mental health nationwide. “Iceland uses more anti-depressants than neighbouring countries,” Jakobsdóttir said in 2019. “We need to strengthen prevention [of depression], through sports and the arts.”

Perhaps just as ground-breaking an approach in recent years has been the one taken by Bhutan, when it introduced the concept of Gross National Happiness (GNH). That said, the focus on nationwide happiness as an alternative to GDP is nothing new for the diminutive South Asian country. Its legal code of 1629 stated, “If the government cannot create happiness for its people, then there is no purpose for government to exist.” But GNH was more formally promoted in the early 1970s through the efforts made by Jigme Singye Wangchuck, Bhutan’s fourth king.

In terms of measuring the wellbeing of the Bhutanese population, the GNH Index—also known as the GNH Happiness Survey—is employed. The index comprises nine key domains that are supported by 33 indicators: 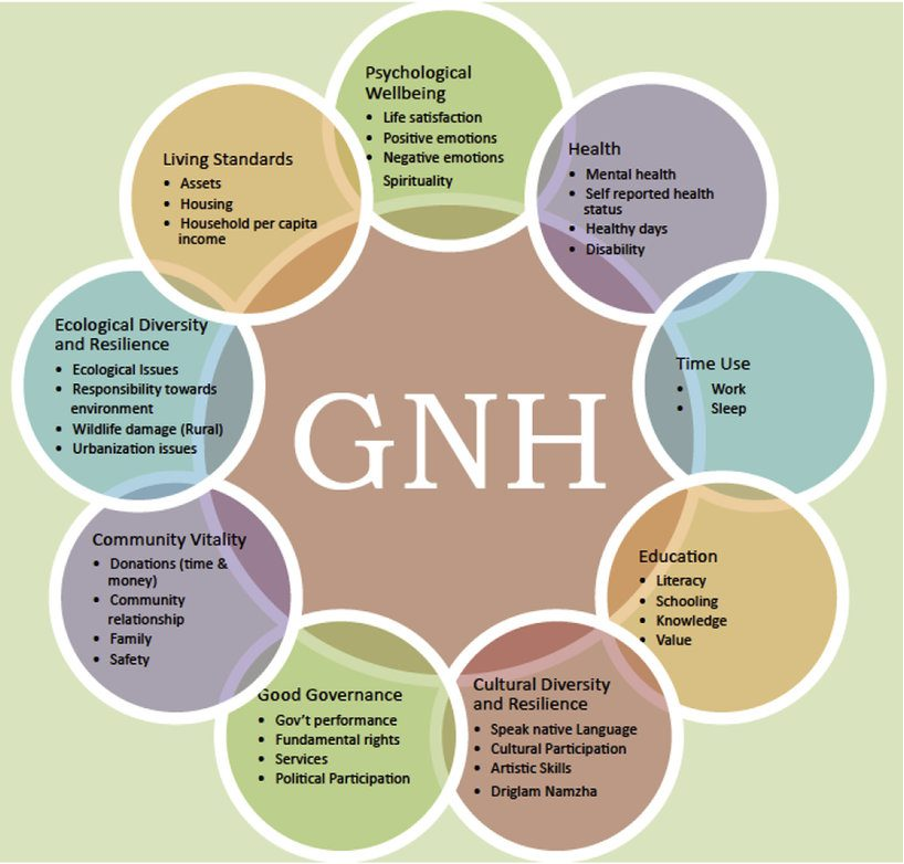 “The Index makes the analysis of the nation’s wellbeing with each person’s achievements in each indicator,” noted GNH Centre Bhutan, a non-profit civil society organization. “In addition to analysing the happiness and wellbeing of the people, it also guides how policies may be designed to further create enabling conditions for the weaker scoring results of the survey.”

But while such comprehensive approaches from the aforementioned countries are undoubtedly impressive, that’s not to say GDP is completely defunct—far from it. It still provides the most useful snapshot of an economy at any given point in time and offers policymakers crucial information about how quickly or slowly an economy is expanding or contracting. And by identifying the components used to calculate GDP—namely consumption, investment, government spending and the import/export balance—one can still accurately pinpoint specific areas within an economy that are thriving and/or underperforming and ones that require attention. Nonetheless, the heightened focus being placed on a range of quality-of-life indicators such as mental wellbeing, climate change and the environment, social and human-rights issues, and health and education standards means that GDP’s power continues to be diluted in favour of a broader approach to addressing wellbeing.

Will GDP be dethroned as the go-to proxy for standard of living any time soon? Unlikely. But the expansion in recent years of the conception of what constitutes a high standard of living and the growing awareness that income per capita on its own rarely reflects a population’s true quality of life means that GDP does not command the same influence within the minds and strategies of policymakers as it did once upon a time.

As Joseph Stiglitz observed, it should be clear that despite increases in GDP and the 2008 crisis being well behind us, quality of life across the globe is not necessarily better. “We see this in the political discontent rippling through so many advanced countries; we see it in the widespread support of demagogues, whose successes depend on exploiting economic discontent; and we see it in the environment around us, where fires rage and floods and droughts occur at ever-increasing intervals.”

And as we gradually emerge from yet another ongoing global crisis, the need to capture all factors that impact the overall quality of our lives could not be more urgent.

Fintech Funding Trends During the Pandemic