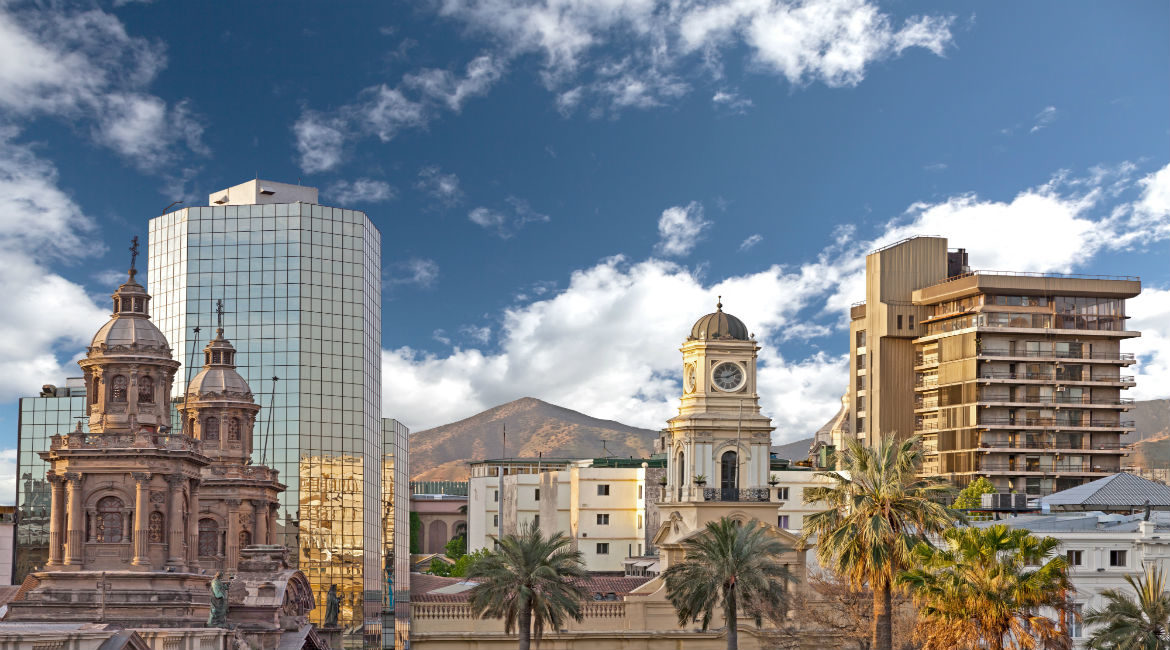 Chile’s economy has underperformed in recent years. But the country has the ability to endure challenging growth conditions. International trade—built on a secure financial landscape and strong banking partnerships—will be vital to sustained recovery.

The Chilean economy, long one of the fastest growing in Latin America, has been stuck in low gear recently. With its crucial copper trade faltering amid weak global demand, gross domestic product (GDP) growth has remained under 3 percent for the past few years—in stark contrast to healthy rates of around 5 percent seen over the past decade.

Yet Chile can count on key assets that will allow its economy to brave the current environment. A progressive sovereign wealth fund will offer important fiscal relief to the government, and a weak currency will boost the flow of Chilean exports abroad, making them less expensive in international markets. Meanwhile, a strong local banking sector will draw important foreign direct investment (FDI)—essential for Chile’s continued diversification of its exports. The banking sector will also help drive Chile’s economic progress in the years ahead. Partnerships between local and international institutions will continue to provide the key connectivity it needs to seek out new markets abroad.

A poor export outlook is putting the brakes on the economy.

Chile’s economic growth has been rather modest lately. According to the International Monetary Fund (IMF), its economy grew by only 1.8 percent in 2014; 2.1 percent was recorded in 2015; and a mere 1.5 percent is predicted for this year. The IMF does not see growth moving beyond the 3 percent mark until 2019.

Despite the humble growth outlook, the economy does still remain stable. Indeed, many other developed economies still recovering from the 2008 global financial crisis—particularly those in Europe—might be content with similar growth figures. Not Chile, though. For an economy accustomed to growth rates averaging 5 percent over the past decade, such levels are underwhelming. In fact, as the chart shows, this represents the worst period of growth for Chile since the crisis itself. 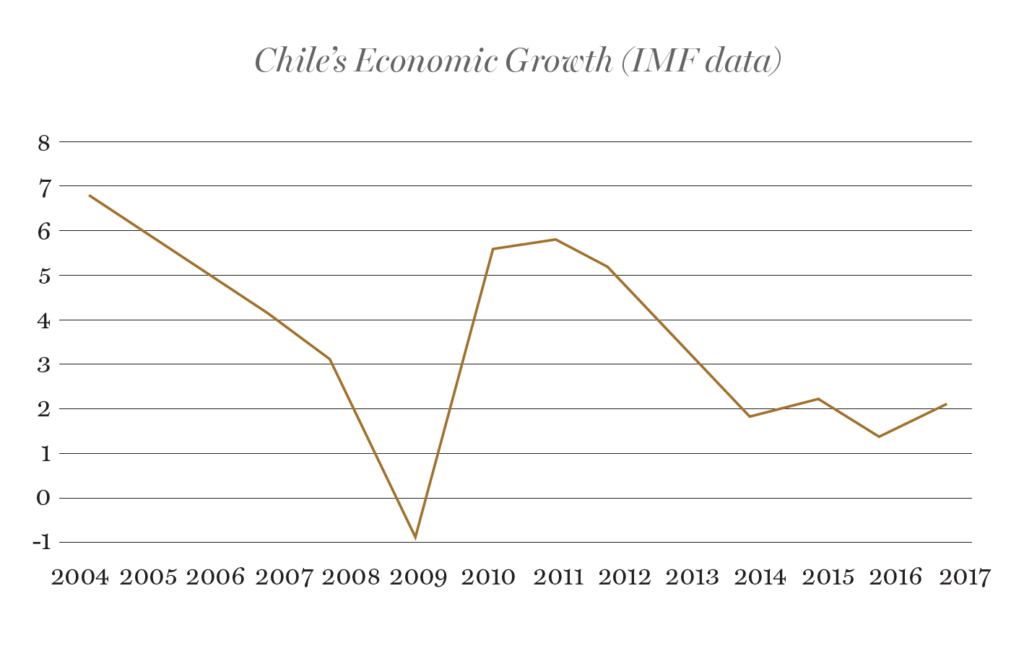 An unimpressive export environment is largely to blame. The country’s exports fell by 6.5 percent in volume last year, which marks the sharpest drop since 2009. Not helping the situation is Chile’s dependence on trade with China. China buys a full quarter of Chile’s exports, yet slow economic growth of its own—the slowest in a quarter of a century last year—has translated into slack demand for Chilean exports.

Most notably, Chile’s vital copper exports are facing the headwinds of slack demand and low prices in global markets. Despite 30 years of diversification efforts, as the world’s largest producer, Chile is still heavily reliant on the metal for as much as 49 percent of all its exports, crucial provisions of foreign exchange and around a fifth of government revenues. In fact, the first half of 2016 saw the value of Chile’s copper exports drop by no less than 16.1 percent compared to the same period last year. Again, this is the lowest level since the aftermath of the global crisis: according to S&P Global Platts, this reflects global prices for the metal tumbling to barely half those of 2011.

No wonder, then, that the effects on the Chilean economy have been considerable. Once used to fiscal surpluses—traditionally buoyed by the copper trade—the country is now experiencing deficits. Inflation has climbed from around 1 percent in 2013 to 4.7 percent today, the Chilean peso has depreciated as a result, and domestic demand has dropped.

All is not lost. Chile can depend on secure underpinnings that will help it weather current economic challenges.

For one, a forward-looking sovereign wealth fund will help Chile cushion the blow of reduced copper revenues and low commodity prices. Tracing its origins back 30 years, the Economic and Social Stabilisation Fund (ESSF) is tailor-made to offer the government critical relief from fiscal deficits and public debt. The ESSF already proved its worth in 2009, for instance, providing more than $9 billion worth of support to Chile’s recovery from the crisis.

Secondly, the depreciated peso could mean a short-term boost to Chilean exports. This is because foreign buyers find Chile’s goods less expensive to import—and thus more competitive on global markets.

Thirdly, Chile benefits from a robust financial sector that will build economic resilience yet further. At Commerzbank, we have seen how the country’s local banks—among them, the 13 we support from our relationship office in Santiago—profit from conservative fiscal policy, good liquidity levels and strict regulation. In fact, despite the economic slowdown, we have noted that most Chilean banks posted healthy balance sheets at the start of 2016.

It is just these banks that will allow Chile to secure inflows of FDI, enabling it to continue its economic-diversification efforts. FDI can move Chile away from dependence on commodities—not only copper but also seafood, salmon and fruit—that leave it vulnerable to volatile export revenues.

In this regard, investment can expand Chile’s booming services sector and complement its industries—such as hi-tech manufacturing, airlines, retail and tourism—that will contribute towards good growth rates for the long-term. The country’s retail sector, for instance, has enjoyed great success in exporting its business. Chilean retail companies have been taking advantage of new opportunities to open new branches across Latin America, tapping demand from Argentina and Colombia to Mexico and Peru.

But Chile also needs to find markets for these exports further afield if it is to safeguard economic success in the future. Without doubt, trade with established trading partners such as Europe and the United States will continue to be essential. The volume of Chile’s bilateral trade with Europe alone has more than doubled since 2003. And, of course, despite the low-growth environment, trade with China—still Chile’s top trade partner—will continue to be a top priority.

Yet the Chilean economy could also profit from trade that is increasingly pivoting toward other countries in Asia and the Pacific. For example, it is building on strong commercial and political ties with India, already cemented in the 2007 Preferential Trade Agreement. And as a result of the Trans-Pacific Partnership (TPP) free trade agreement, Chile could ramp up commerce with 10 Pacific countries, such as Australia and Malaysia.

Clearly, Chile’s banks will need to be prepared to seek partnerships with those global banks that can offer the international reach they and their corporate clients need to facilitate trade abroad. In this regard, global banks can leverage their networks of strategic banking relationships in order to provide essential cash and trade-finance services—such as guarantees and letters of credit.

Indeed, banking partnerships will be key to weathering the challenging conditions currently faced by Chile’s commerce. As Chilean banks engage in fierce competition to secure Chinese trade, partnerships with global financial institutions can give them the edge they need to attract customers. For instance, a longstanding partnership with Commerzbank gives the 1,500 corporate customers of Chilean commercial bank Banco BICE access to the renminbi accounts they need to enter tempting Chinese markets. What’s more, as Chile’s economy looks to the future, global banks can help tap new markets with growth potential. Their targeted local expertise can help mitigate the payment and counterparty risks Chilean corporates may face in unfamiliar markets. This will doubtless be crucial as they explore trade with emerging Southeast Asian economies under the TPP.

Chile’s economy may not be quite up to speed. But in the short-term, it certainly has the ability to recover. And in the long-term, spurred on by trade, with its healthy banking sector and the promise of fruitful partnerships around the globe, Chile could well be on its way to regaining pole position in Latin American growth.

Banks Revise Their Forecasts on Brexit

Heard of ‘tech-local’? It’s going to be your future bank branch