Top Posts
Challenges Remain, But There Are Opportunities to Be Had in...
Interview with Mr. Olukayode Pitan, Chief Executive Officer and Managing...
Commodities Outlook for 2023
The Value of Cash in a Time of Crisis: How...
The US-Africa Leaders Summit: Fostering a Closer Relationship with the...
Three Key Sectors in Which to Invest in 2023
Home Finance UK GDP Grew by 6.6 Percent in July
Finance 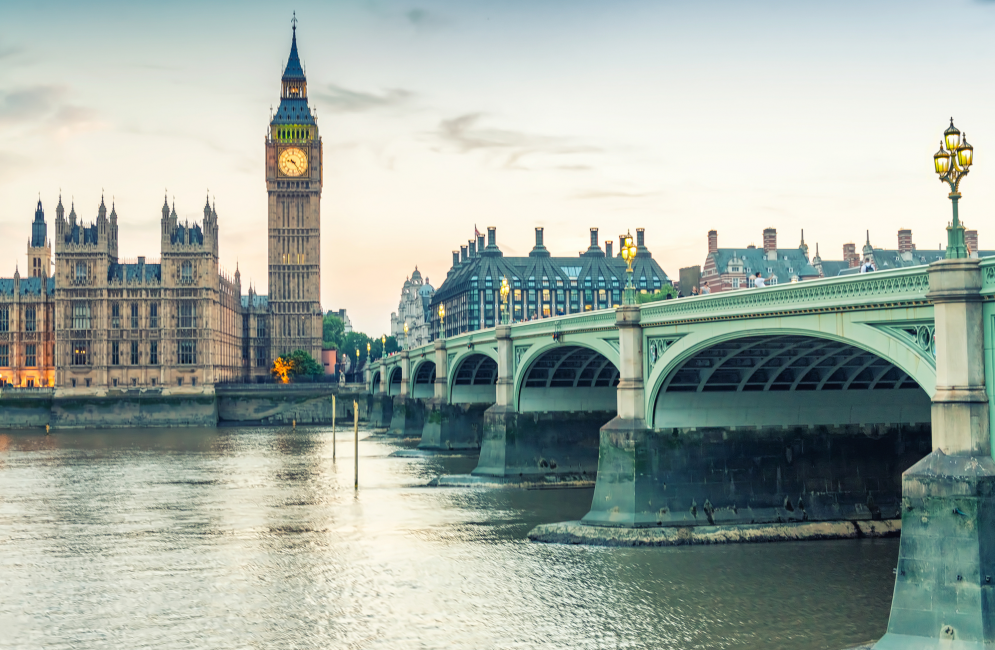 According to figures released on Friday, September 11, by the Office for National Statistics (ONS), the United Kingdom’s gross domestic product (GDP) expanded by 6.6 percent during July, as lockdown measures in the country continued to ease and the economy showed clearer signs of recovery. That said, it still recovered only a little over half of the lost output caused by the coronavirus, the ONS acknowledged.

July’s GDP growth was almost exactly the same as the 6.7-percent growth that the market had predicted and followed the 8.7-percent and 2.4-percent expansions in June and May, respectively, as well as the record 20.0-percent contraction in April 2020. As such, the July figure is 18.6 percent higher than the April 2020 low.

And during the May-July three-month period, the economy shrank by 7.6 percent compared with the previous quarter, thus falling almost exactly in line with market expectations of a 7.5-percent fall. It also represented a dramatic improvement from the 20.4-percent decline the UK economy experienced during the three months to June.

But while the UK is showing promising signs of an economic recovery, July’s GDP levels remain some 11.7 percent below that recorded in February, just prior to the coronavirus pandemic taking hold.

“While it has continued steadily on the path towards recovery, the UK economy still has to make up nearly half of the GDP lost since the start of the pandemic,” noted Darren Morgan, ONS director of economic statistics, adding that improvements were recorded across several key sectors, including education with children returning to school as well as pubs, campsites and hairdressers. Car sales also exceeded pre-crisis levels for the first time, while manufacturing, particularly distillers and carmakers, also experienced notable upticks.

“However, both production and construction remain well below previous levels,” Morgan confirmed. Industrial production in July recorded a 5.2-percent rise over the previous month, which was ahead of analyst expectations for 4-percent growth but marked a slowdown from the 9.3-percent growth recorded in June. Manufacturing production, meanwhile, grew by 6.3 percent, following 11-percent growth in June. 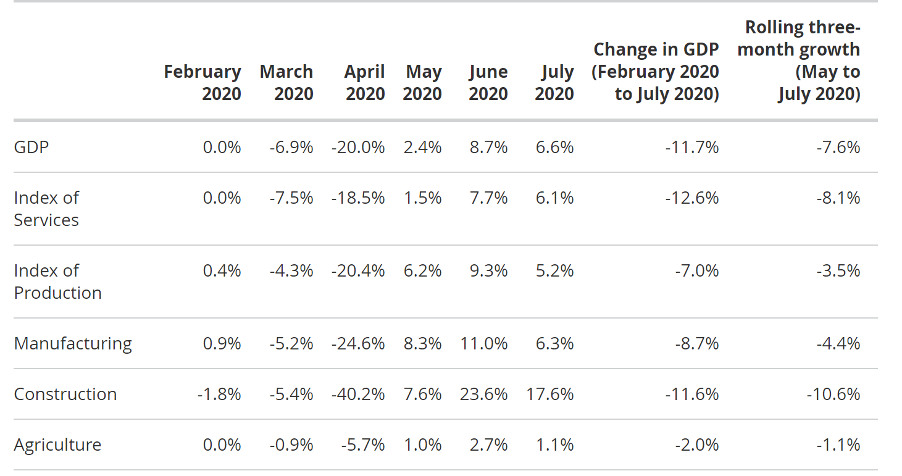 Breakdown of GDP and its components’ growth rates by month | Source: Office for National Statistics

Looking forward, some believe that while August figures should also be similarly positive, the autumn may experience some challenging headwinds starting in September. UBS economist Anna Titareva, for instance, identifies the ending of both the holiday season and the Eat Out to Help Out Scheme, which was designed to help the struggling hospitality sector, as being particularly significant. Speaking to The Guardian newspaper, Titareva said that the Swiss bank’s baseline GDP scenario for the third quarter is 16-percent growth from the second quarter, but that there are key downside risks to domestic demand beyond this period.

“Firstly, a slow recovery in spending in sectors involving social interaction, even before the recent spike in infection rates. Secondly, a significant increase in unemployment as those who lost their jobs in recent months (but have not yet been classified as unemployed) start actively looking for work, and with the end of the Coronavirus Job Retention Scheme (CJRS) in October. And lastly, a slow recovery in business investment owing to a combination of weak demand and renewed Brexit uncertainty.”

ING economist James Smith shared a similar projection. “This ‘mechanical rebound’ process should see a further increase in August, perhaps in the region of 3%, and a subsequent bounce in September to reflect the reopening of education venues (this part of the national accounts is as we understand it heavily dependent on the volume of people attending them). All in, we think the third quarter will register around 17% growth.”

Separately, the ONS also released its latest figures for the UK’s trade performance in July. “The total trade surplus, excluding non-monetary gold and other precious metals, widened by £5.9 billion to £6.4 billion in the three months to July 2020, as imports fell by £8.5 billion and exports fell by a lesser £2.7 billion,” stated the UK’s statistics organisation, which it largely attributed to “a £3.4 billion narrowing of the trade in goods deficit, while the trade in services surplus widened by a lesser £2.4 billion.” 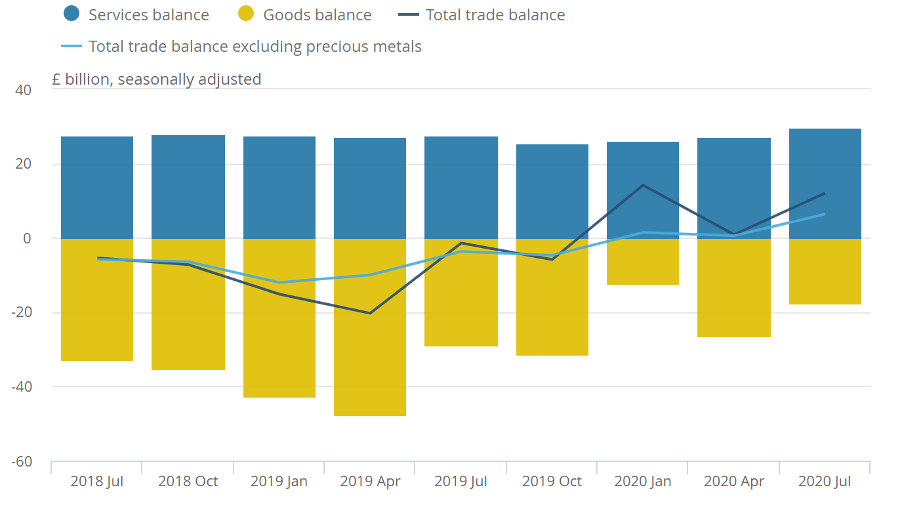 The largest falls in both imports and exports of goods during this period were recorded in machinery and transport equipment and fuels, which the ONS linked “to the sharp drop in demand for road vehicles and oil due to coronavirus-related restrictions”.

On a monthly basis, the UK’s trade surplus, excluding non-monetary gold and other precious metals, narrowed by £600 million, as imports rose by £3.3 billion to £49.0 billion and exports rose by a smaller £2.7 billion to £50.2 billion.