Top Posts
Challenges Remain, But There Are Opportunities to Be Had in...
Interview with Mr. Olukayode Pitan, Chief Executive Officer and Managing...
Commodities Outlook for 2023
The Value of Cash in a Time of Crisis: How...
The US-Africa Leaders Summit: Fostering a Closer Relationship with the...
Three Key Sectors in Which to Invest in 2023
Home Finance Was Abenomics Successful in Achieving Its Aims?
Finance 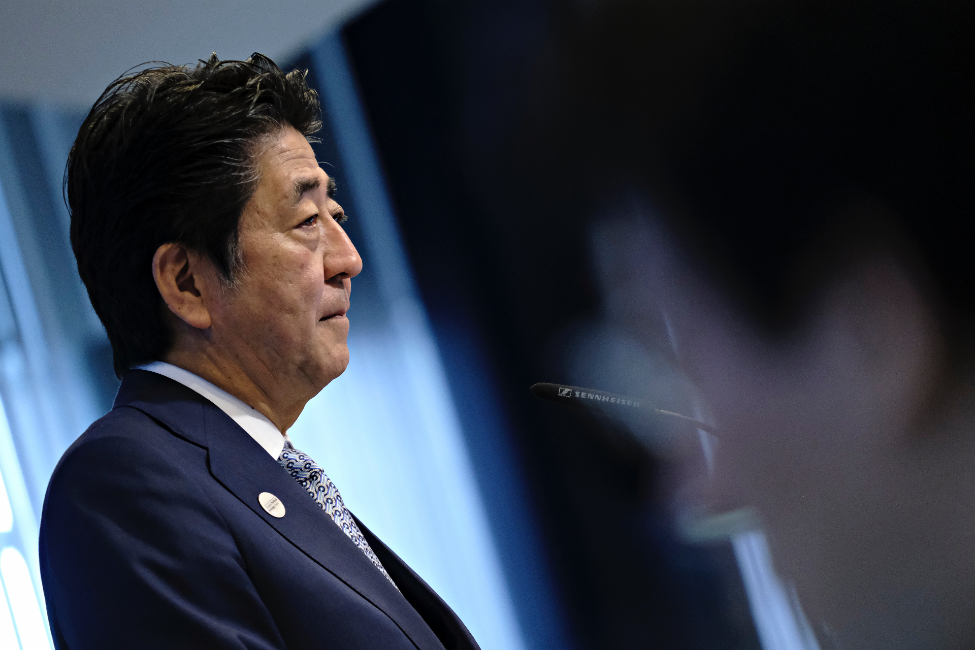 On September 16, Chief Cabinet Secretary Yoshihide Suga was officially confirmed as Japan’s new prime minister. The confirmation signalled the end of Shinzo Abe’s near eight-year reign, which had come to a sudden halt three weeks earlier when he’d announced his resignation on the grounds of health reasons. Abe’s departure marks the end of his second period as prime minister, having initially led the nation in 2006-07 and then for a much longer stint beginning at the end of 2012. And it was not long after commencing his second term that he introduced Abenomics to a country becoming increasingly desperate to shake itself out of its long-running economic malaise, before famously standing on the floor of the New York Stock Exchange (NYSE) a year later, urging investors to “buy my Abenomics”.

Abe’s much-discussed strategy hinged on three main policy “arrows”: aggressive monetary easing, fiscal consolidation and structural reforms to boost competitiveness and economic growth. It was designed to jumpstart Japan’s economy after two decades of tepid deflationary growth resulting from unprecedented—and unsustainable—prosperity in the country during the latter half of the 1980s. But the bursting of a hugely inflated asset bubble at the end of 1990 saw the country enter what became known as the “lost decade”. By the early-2000s, the economy was granted some respite through a wave of government bailouts for troubled lenders and the emergence of China as a global economic force, which eased the pain for manufacturing exporters. But despite the modest recovery during this time, the economy remained largely stagnant as low growth and chronic deflation persisted.

Abe thus marketed his three-pronged policy as one that would end this long deflationary cycle and give Japan its “first shot toward economic revival”. Among the most notorious features of Japan’s economy during that lost decade was the government’s relentless spending to stimulate growth, coupled with its insistence on keeping taxes low, which meant that it ended up running a massive fiscal deficit year after year from 1991 onwards. By the time Abenomics was introduced in 2013, Japan had amassed the most debt of any country, at 232 percent of gross domestic product (GDP).

In that sense, Abenomics has been at least moderately effective in plugging this fiscal hole. Significant increases in value-added tax and a consistent decline in government spending as a proportion of GDP has helped to claw the budget deficit back to manageable levels.

That said, Abenomics largely failed to bring about a reduction in Japan’s overall public debt ratio, which has remained above 230 percent, according to figures from the country’s Ministry of Finance. As leading ratings agency Fitch stated earlier this year, “Japan’s gross government debt ratio of around 230 percent of GDP at end-2019 is the highest among Fitch-rated sovereigns, and constrains the rating.” 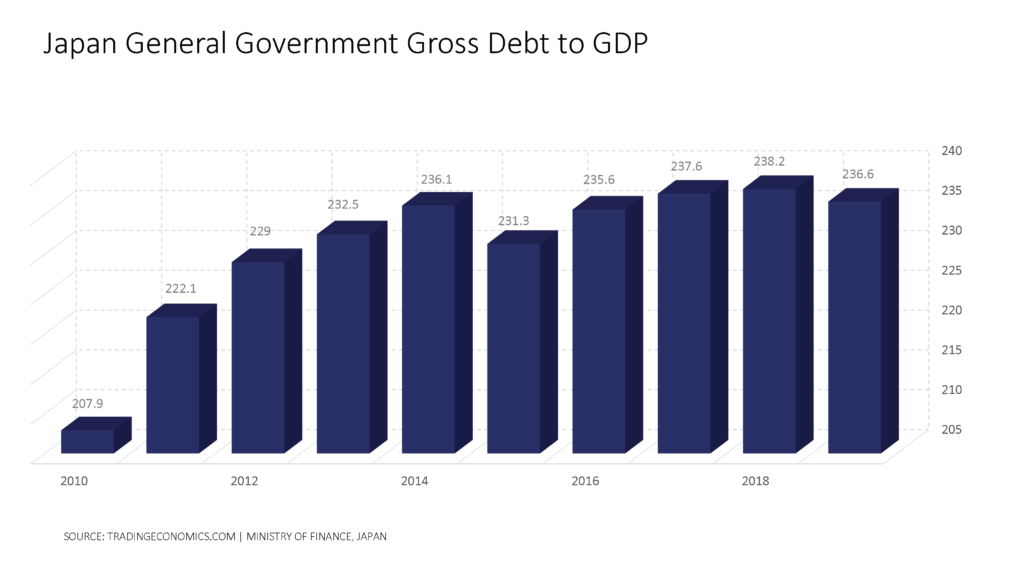 But there were several “wins” on the macroeconomic front of which Abe can certainly be proud. Among the clearest is the unemployment rate, which fell from 4 percent at the start of his second tenure in 2012 to just 2.2 percent before the pandemic took hold. Indeed, this was certainly a notable achievement for Abe, who highlighted his government’s efforts in creating four million jobs at a press conference on August 28, when he announced his departure. And the stock-market gains during this time were also impressive, with the Nikkei 225 index nearly doubling in the seven years from the end of 2012, when Abe took office again. “Abenomics has been effective in supporting large firms by boosting equity markets and nurturing the sense of stability that a sharp appreciation of the yen will not happen again,” observed Shigeto Nagai, head of Japan economics at Oxford Economics. “During Abe’s time in office, the profitability of large firms has risen significantly, by expanding their business abroad.”

Throughout much of the Abenomics era, however, age-old problems that the policy sought to resolve have persisted. Other than a brief period in 2014, inflation has remained almost consistently below 1 percent and has also entered negative territory on more than one occasion; wage growth has followed a similar pattern and indeed has been mostly negative over the last 18 months or so, which has meant that household incomes have remained stagnant; consumption and investment growth has been lacklustre virtually throughout the last decade; and although the yen weakened significantly against the US dollar early on, which undoubtedly supported Japanese exporters, it has shown much resilience in more recent years.

Such disappointments have transpired despite the aggressively expansionist monetary policy implemented during this time, with the Bank of Japan (BoJ) first adopting negative rates in January 2016 and diving further below zero at times since then.

As far as structural reforms are concerned, meanwhile, the report card for Abenomics can be described as mixed at best. Much of Abe’s focus for this “arrow” was on raising economic growth by boosting worker productivity, as well as labour-force participation. Among the most scrutinised of those reforms was perhaps “Womenomics”, an initiative that aimed to push more women into Japan’s labour force—or a “Japan in which women can shine”, as Abe put it in 2013. The original goal back then was to see 30 percent of leadership positions being filled by women by 2020, partly as a way to soften the approaching demographic time bomb of Japan’s ageing population that is set to trigger an estimated 40-percent reduction of its working population by 2055. But while three million more women were working in 2019 than in 2012, most of their jobs have been part-time roles rather than leadership positions, with women continuing to earn about three-quarters as much as men on average.

“This country is already on the brink of a demographic crisis,” Kathy Matsui, Goldman Sachs’s chief Japan strategist, said last year. “If your sole key resource as a nation is your human capital, you don’t have a lot of options but to leverage every single human being.” Indeed, Matsui calculated last year that Japan is forgoing a 15-percent boost to its economy by not having women working to their full potential and matching the output of men via both their numbers in the labour force and the number of hours they work per day. And this disparity goes all the way to the highest echelons of government. “I’m advocating gender quotas in parliament,” Matsui said. “It’s just unacceptable to me that the most important laws and decisions affecting everyone living in Japan are determined 90 percent by one gender.”

Abe also expressed strong support for participation in the Trans-Pacific Partnership (TPP) as a way to circumvent certain regulations that were potentially constraining Japan’s growth and tax-revenue inflows. But after the United States withdrew from the pact, and the deal went sour, TPP’s failure ended up proving to be a major thorn in Abe’s efforts to achieve his economic goals.

There were some victories on the reforms front, however—perhaps none more significant than his successes in strengthening corporate governance. Starting in 2014, Abe implemented key governance measures designed to boost the profitability of Japanese firms and, in turn, attract more foreign investment, including raising the number of independent external directors, requiring the disclosure of risk-management and governance policies, strengthening external monitoring processes and improving accountability to shareholders. And there’s much evidence to suggest that such measures were welcomed across the country, with the proportion of companies listed on the first section of the Tokyo Stock Exchange (TSE/TYO) having at least two independent directors rising from 21.5 percent in 2014 to more than 95 percent today, according to the figures of the operator of the Tokyo and Osaka stock exchanges.

So, does Abe’s departure sound the death knell of Abenomics? Hardly. Many believe his successor, Yoshihide Suga, won’t deviate significantly from Abe’s policies, especially as he has presented himself as the “continuity” candidate during his replacement bid. Indeed, one analyst recently characterised the likely economic mindset of the Suga regime as being “Abenomics minus Yasukuni”, with Abe once being advised by his successor not to visit the Yasukuni Shinto shrine to war criminals who served the Emperor of Japan whilst he was in office. This means that there will effectively be no change, with Abenomics set to remain in place for the foreseeable future.

Of course, the onset of the coronavirus pandemic, which has severely limited economic activity in Japan and throughout much of the world, has meant that economic stability in 2020 has been all but thrown out of the window. Fiscal consolidation has been decidedly put on hold as the government has sought to boost spending to support businesses and households during the ongoing crisis. But in some ways, the pandemic may mask some of the shortcomings of Abe’s management of the economy towards the end of his tenure, as Japan was in a recession prior to COVID-19.

“Abenomics did create growth and avoided the worst-case scenarios for (the) Japanese economy,” Josh Lipsky, director of the global business and economics program at think tank Atlantic Council, told CNBC in early September. But while it did have such notable successes, inflation remains below target, debt remains sky-high, and reforms on the whole have not delivered as much as was initially hoped. But perhaps when viewed in a global context, Abenomics can be regarded in a more positive light. After all, many economies are struggling with chronically low inflation and mounting public debt, while key reforms in some countries have delivered similarly lacklustre results. As such, Abenomics distinctly remains a work in progress.

Micro-Investing: Accessible Investing for Everyone