Top Posts
Crypto-assets and the Relevance of International Private Law
Whither International Banking Regulation?
Interview with Mr. Selman Bicaco Urrutia, Head of Private Banking...
Interview with Ms. Jelena Galić, Chairperson of the Board of...
The International Banker 2022 Western & Eastern European Awards Winners
Why the Status of the Fifth-Largest Economy Is a Job...
Home Finance What’s Behind Oil Prices Recently Hitting a Two-Year High?
Finance 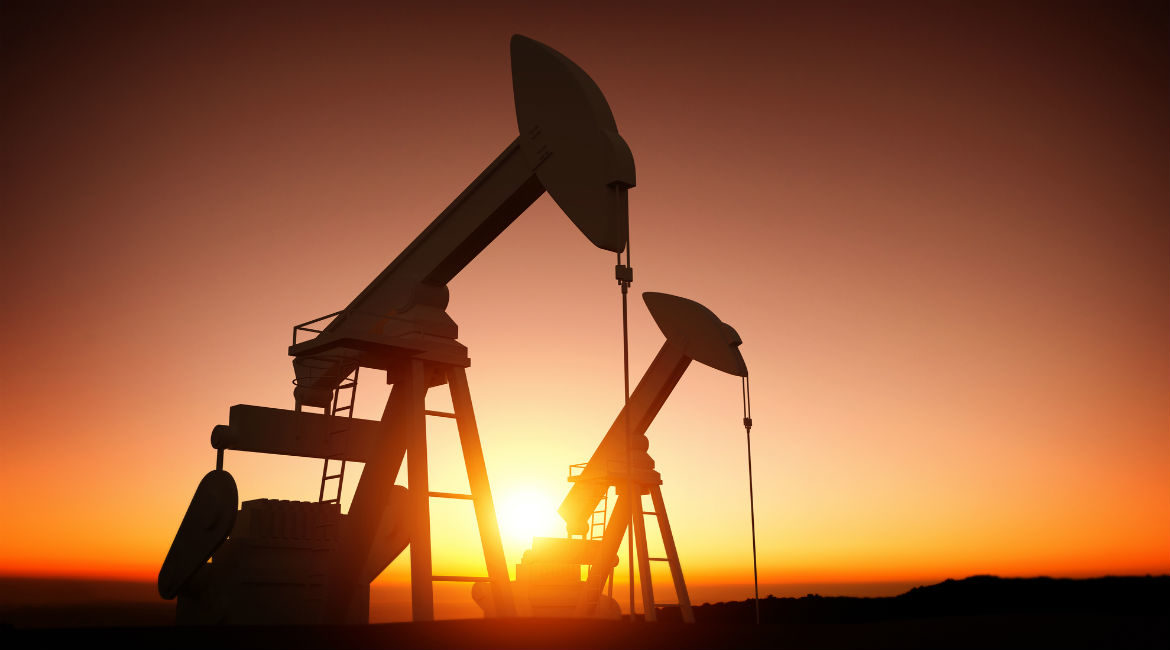 Have global oil markets finally broken free of the low-price environment that has persisted in recent years? That’s what a growing chorus of analysts are suggesting; and now that crude has recently hit price levels last seen more than two years ago, it would appear that the oil bulls finally have something to cheer about: 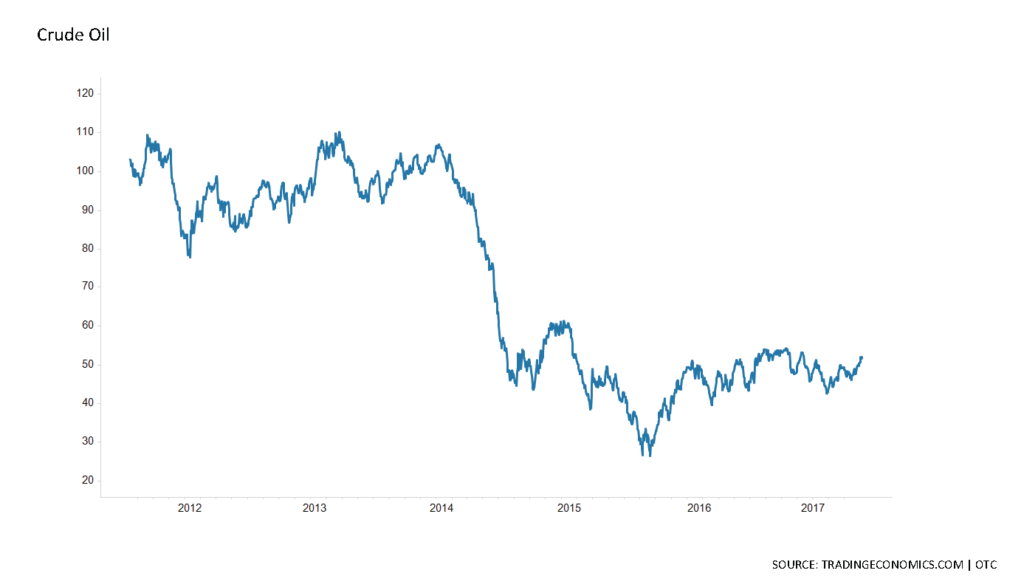 The recent optimism that has pervaded throughout global crude markets seems a far cry from the negative forecasts that were frequently made by analysts and executives across the world. Even as late as October, it was being widely predicted that oil would remain around $50 for the remainder of the year and into 2018. However, prices have managed to climb by more than $15 from June’s year-low, and now US West Texas Intermediate (WTI) crude is trading just shy of $60/barrel (bbl).

The clearest factor pushing crude higher at present is the political uncertainty emanating from leading OPEC (Organization of the Petroleum Exporting Countries) member Saudi Arabia. The Kingdom’s Crown Prince Mohammed bin Salman recently embarked on some fairly drastic anti-corruption measures, including the arrest or detention of several Saudi princes and former ministers on charges of corruption and financial malfeasance, among others. Such moves have been described as “phase one” of the crackdown, suggesting that more officials and royalty are likely to be in the firing line in the near future. Many see the crown prince’s purge as a dramatic attempt to consolidate his power prior to assuming the throne by next year at the latest. And given that he is a firm supporter of OPEC’s current policy of production cuts, it is now more probable that such a policy will remain in place for the majority of 2018. As such, with supply cuts now expected to endure, oil prices are reacting by heading sharply higher.

Indeed, OPEC itself has played a pivotal role in inspiring crude’s rebound this year. The decision in January taken by 21 leading oil producers around the world, including the multi-nation oil cartel and major producer countries such as Russia and Mexico, to cut total output by 1.8 million barrels per day (bpd)—or about 2 percent of global oil supply—has helped to diminish the substantial global crude supply glut that had emerged over the previous two years and which imposed significant dampening on prices. For the most part, the countries involved in the agreement have managed to remain in compliance with the agreed cuts during the year.

Lower-than-expected supply has been instrumental in helping prices to rally in recent months. Global supply in August, for example, fell for the first time in four months, according to the Paris-based International Energy Agency (IEA). The bulk of this dip was attributed to OPEC’s constrained production, which led to a shortfall in the region of 210,000 bpd compared with the previous month, as well as a considerable raft of refinery outages and maintenance issues that emerged in the aftermath of Hurricane Harvey, which led to an additional 200,000 bpd of production being shuttered. Since then, supply has remained relatively subdued, with very few signs of a recovery from August’s production drops emerging. Indeed, the IEA noted that “OPEC crude output was virtually unchanged in September as slightly higher flows from Libya and Iraq offset lower supply from Venezuela”.

Supply issues are also currently proving to be bullish for oil prices when examining the quantity of barrels of inventories across the crude-oil complex, especially in the United States. Stocks in the country are down by more than 5 percent compared to the previous year, while US inventories of distillates—refined products of crude oil—are down by more than 14 percent. The OECD, meanwhile, has experienced consistent drops in oil- and petroleum-product inventories throughout the year, which in turn has brought commercial levels down to near the 2012-2016 five-year average. Such drawdowns in inventories indicate a tightening of oil markets, as fewer inventories are now available in reserve to support any potential surge in consumption or shortfall in supply, and have ultimately been influential in boosting prices this year.

On the demand side, meanwhile, things have looked decidedly more upbeat this year, with global demand rising 1.2 million bpd in the first quarter from a year earlier, and then accelerating to 2.3 million bpd annual growth in the second quarter, which is equivalent to about 2.3 percent of total crude demand at present. Much of this growth can be attributed to the Chinese, whose thirst for oil is far outstripping levels recorded in 2016. Indeed, the country’s oil demand rose by 575,000 bpd in the first quarter from the previous year’s first quarter, and then by 700,000 bpd in the second quarter. In early November, moreover, further bullish news emerged from China when it was reported that the Ministry of Commerce has decided to raise its quota for use of overseas oil by non-state companies in 2018 by a whopping 63 percent, compared to 2017 levels. Such an increase will equate to approximately 1.1 million bpd more in foreign oil being allocated to Chinese buyers, and indicates that demand in the world’s top crude buyer will remain buoyant next year. Such sentiment has undoubtedly been bullish for the price of a barrel of oil in recent weeks.

This combination of rejuvenated global demand and a reduction in global supply has caused the global market balance to shift from its state of “production surplus”—a state that has prevailed since 2014—to “production deficit”: 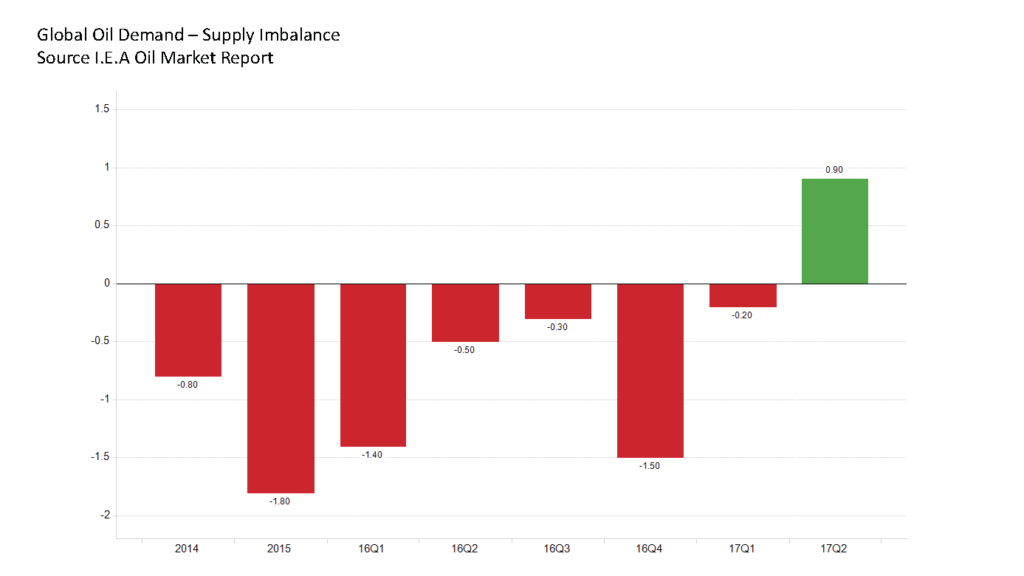 As for the medium-term outlook for oil prices, not everyone is convinced that a continued upward trajectory can be sustained, however. Indeed, some believe that the continuation of the policy of OPEC et al. to extend supply curbs is far from set in stone. Citigroup, for instance, expects that either the cuts will remain until only the end of the second quarter, rather than the full year, or that OPEC will postpone its final decision until early next year (instead of during the meeting scheduled at the end of November). According to Ed Morse, Citigroup’s head of commodities research, “There is an exuberance in the market about there being a done deal to extend through the end of 2018, and I think there’s likely to be disappointment in that come November 30…. Our base case is that we do not get a full-year extension on November 30.”

Moreover, given the significant levels of producer hedging that has been witnessed being carried out by US shale companies for 2018 and 2019, the bank expects a surge in output from this particular source going forward. Citigroup’s latest research projects a dramatic increase of 7.5 million bpd from the North American shale industry, equivalent to a massive 56 percent more than the bank forecast a year ago. And the most recent evidence seems to validate Citigroup’s research; the first week of November saw US crude production hit an all-time high, according to the US government’s Energy Information Administration (EIA). 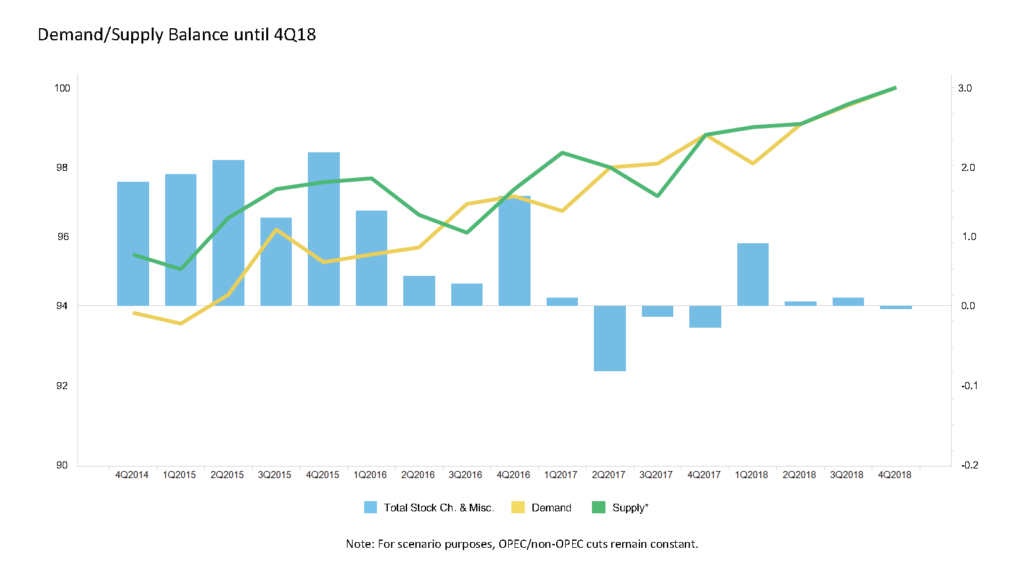 With shale producers clearly showing resilience, the record output levels achieved by the world’s third biggest oil-producing country is likely to weigh considerably on crude prices should they continue during the coming weeks and months, even if OPEC’s cuts remain in place.

The IEA also expects prices to find little further upward momentum in 2018; according to its monthly “Oil Market Report”, non-OPEC demand and supply should grow at roughly the same rate: 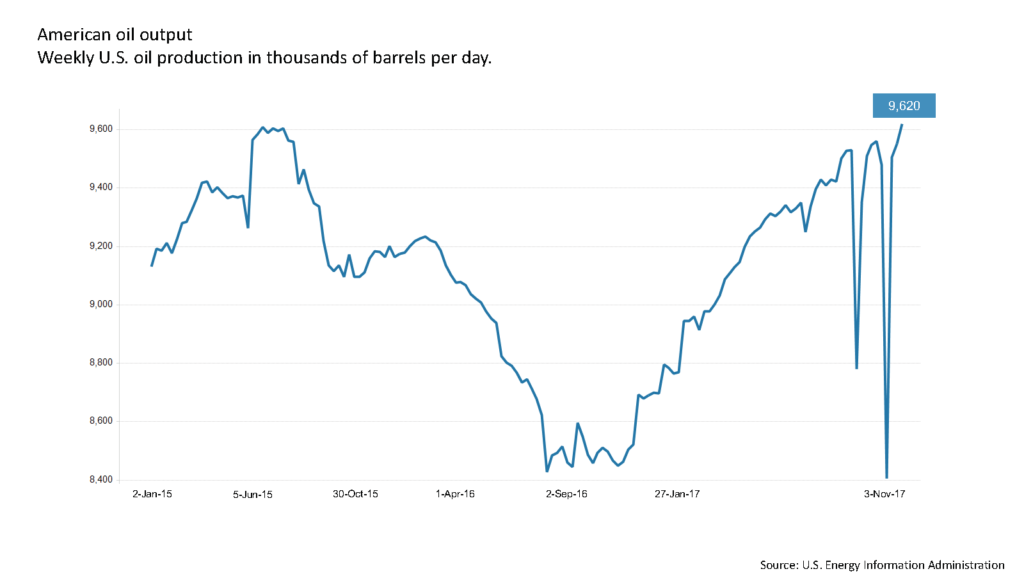 Demand is being forecast to grow next year by 1.4 million bpd, while supply will increase by 1.5 million bpd. Given the similarity in growth rates, therefore, it seems difficult at this stage to conclude that crude prices will see any sharp change in either direction. Such projections have also pushed the agency to conclude that current prices are likely to be a “ceiling”, thus suggesting that a further rally does not appear to be on the horizon. Nevertheless, given the gloom that crude markets have experienced over the past few years, recent events have provided some respite for global oil companies seeking a return to profitable long-term production. Whether this new paradigm can be sustained going forward, however, is far from certain.