Top Posts
Malaysia’s Fight Against Climate Change: Perspectives from a Central Banker
Crypto-assets and the Relevance of International Private Law
Whither International Banking Regulation?
Interview with Mr. Selman Bicaco Urrutia, Head of Private Banking...
Interview with Ms. Jelena Galić, Chairperson of the Board of...
The International Banker 2022 Western & Eastern European Awards Winners
Home Finance What’s Next for the Thai Economy After the COVID-19 Pandemic?
Finance

What’s Next for the Thai Economy After the COVID-19 Pandemic? 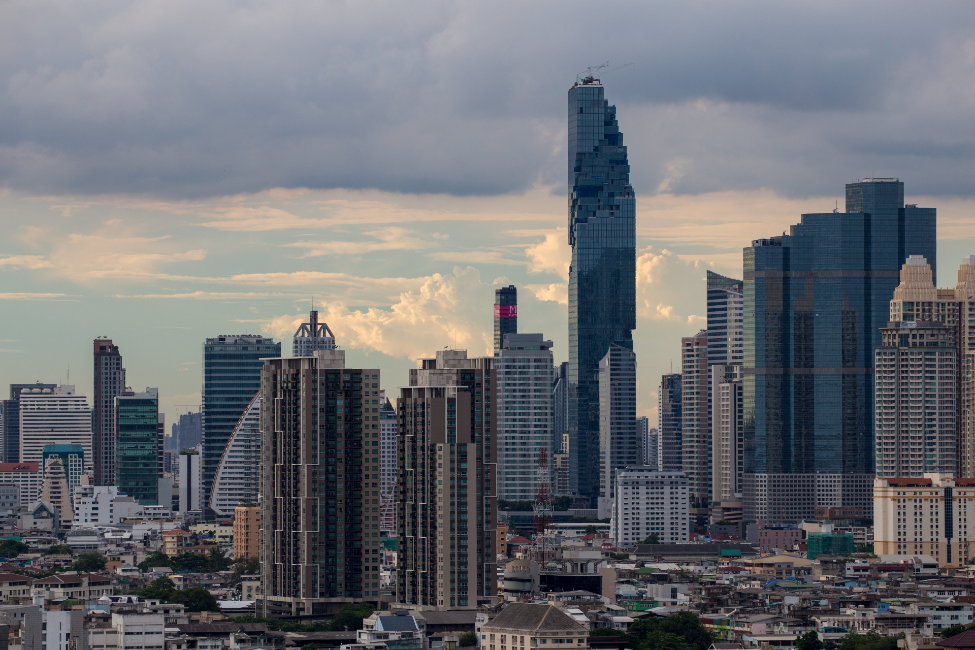 The COVID-19 pandemic has exposed the overreliance of the Thai economy on international tourist arrivals. In 2019, Thailand received almost 40 million foreign visitors, with almost a third of them coming from China. The tourism industry had expected this figure to double by 2030. Foreign tourism contributed, directly and indirectly, around 12 percent to the Thai economy last year. For the past decade or so, the tourism sector grew rapidly without a hiccup. The pandemic brought about a sudden stop to international travel as the scale of the crisis became known around the world.

Disruptions to the Thai economy

During the first quarter of 2020, the number of foreign tourists was just a touch below seven million. Due to the pandemic, Thailand entirely closed its borders for about three months. As a result, the number of tourist arrivals has remained essentially naught since the second quarter.

The Thai government made a difficult decision to impose a national lockdown from the end of March until June. This led to the collapse of consumer spending, as hospitality-service providers remained closed or only partially opened for deliveries and takeaways. Together with the absence of foreign visitors and a sharp drop in exports, the Thai economy took a hard hit, resulting in a contraction of -12.2 percent for the second quarter.

Success in containing the COVID-19 pandemic

The hard decision to impose a lockdown has paid off, as the Thai government bit the bullet by prioritizing the health and well-being of its citizens over economic losses. Daily infections peaked in late March at more than 180 cases but have since dropped drastically—leading to virtually no local infections over the past several months. Thailand recorded around 3,800 cases and only 59 deaths in total. This success was the result of the collective effort of our medical staff, government officials and the Thai people to follow the emergency decrees and observe social-distancing rules. 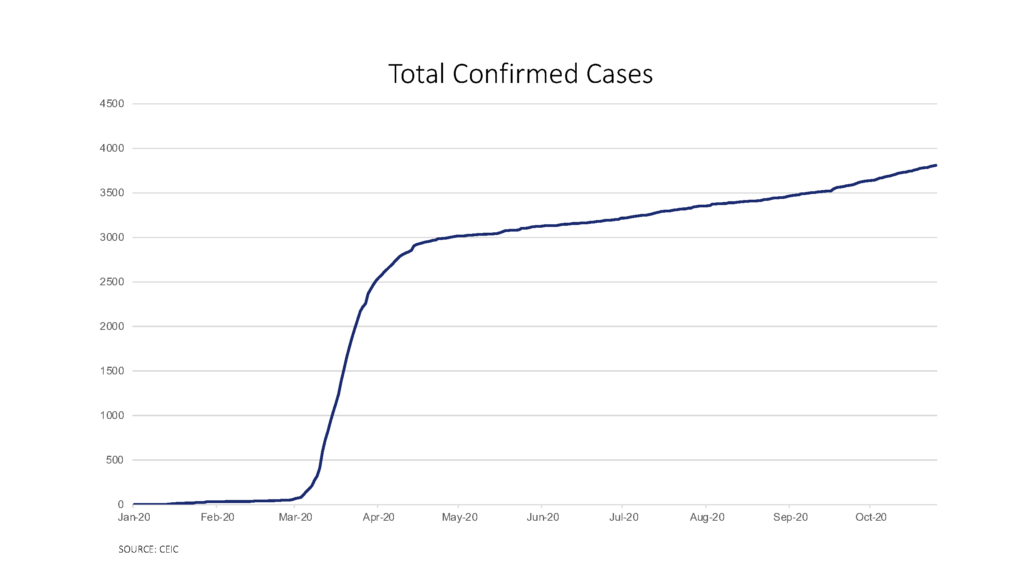 Although the economic pain was immense and immediate, domestic economic activity returned to nearly normal after the easing of lockdown measures. Back in the second quarter, many had forecasted that the Thai gross domestic product (GDP) would contract by at least 10 percent, but recently, the International Monetary Fund (IMF) has revised up its Thai GDP forecast to -7.1 percent, a sharp improvement from the double-digit economic loss many had predicted.

In particular, private consumption bounced back strongly from the second-quarter trough as confidence rose and fears over the pandemic receded. A pickup in consumer spending was evidenced in both durables and non-durables over the third quarter and should continue to remain supported with recent fiscal stimulus aimed at boosting liquidity to those in need.

This pandemic resulted in an unprecedented collapse in overall economic activity, perhaps rivaled only by the Asian Financial Crisis in 1997-98. As such, government responses have also been unprecedented in scale and scope in Thailand. The Bank of Thailand, the central bank, has reduced the policy rate three times, lowering the rate to 0.50 percent – a historic low. At the same time, the Bank has also introduced soft loan schemes and a six-month debt holiday for the private sector. Taken together, these measures provided a liquidity backstop and much-needed respite for businesses facing a squeeze from lockdowns.

On the fiscal front, the government distributed cash handouts to the Thais who were severely affected by the sudden disruptions to their livelihood during lockdown, as well as those in vulnerable segments, such as farmers and the poor. All in all, more than 30 million people (out of the whole population of 68 million) received some direct financial support from the government. The ongoing fiscal stimulus measures include various schemes to boost consumption, investment and local tourism. Prior to the crisis, public debt stood at around 42 percent of Thailand’s GDP. With the combination of massive fiscal support and contraction in GDP growth, the ratio is expected to rise to around 50 percent at year-end. 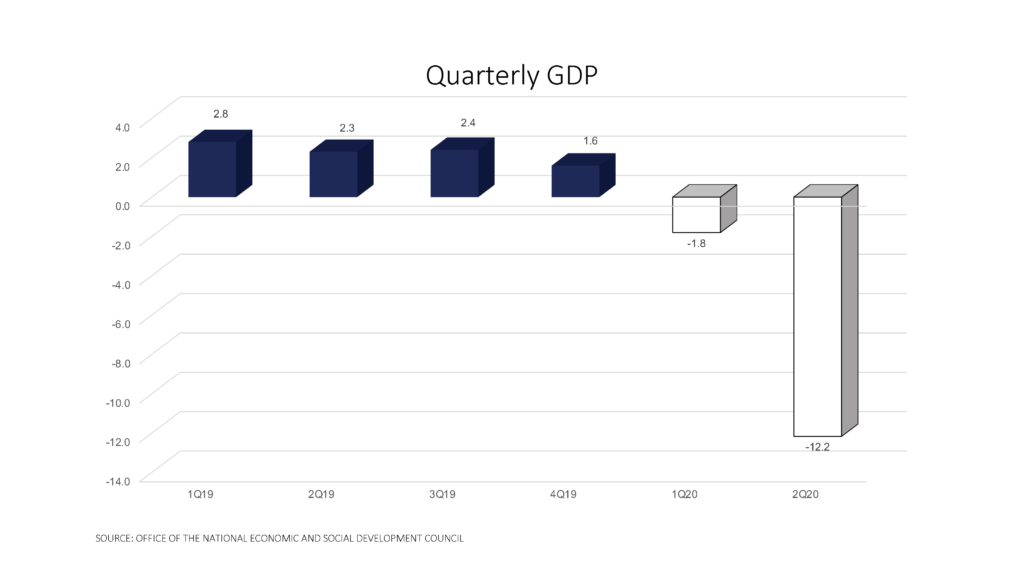 Due to solid public financial standings, Thailand likely will maintain its credit ratings with a stable outlook for the coming quarters. Against that backdrop, the government still has ample fiscal space to support the economy while the world continues to be ravaged by the disease. In turn, the government will have to balance the need to stimulate the economy with its obligation to maintain fiscal discipline.

For now, the battle against COVID-19 is won in Thailand, so another lockdown is highly unlikely as long as our borders remain closed. But we are slowly and carefully reopening our borders to overseas tourists and business travelers while maintaining stringent containment measures, such as a 14-day quarantine for all visitors. Therefore, a rapid rebound in tourist arrivals is out of the question.

It is by now clear that the boom in tourism is over, but it is unclear when the tourists will be back in a meaningful manner. When will tourist arrivals be back at 40 million as in 2019? That is a question for which nobody has the answer. Thai hotels have responded by offering cheap hotel staycations to attract local tourists. Room rates have dropped by a whopping 90 percent in some cases. Mass tourism will probably not return any time soon. Hence, Thailand is redesigning itself as a destination for wealthy tourists, which will rapidly offset the enormous losses in tourist receipts. However, only the top hotels and resorts would have a chance to survive, while smaller hotels and guesthouses would not, under such a scenario. 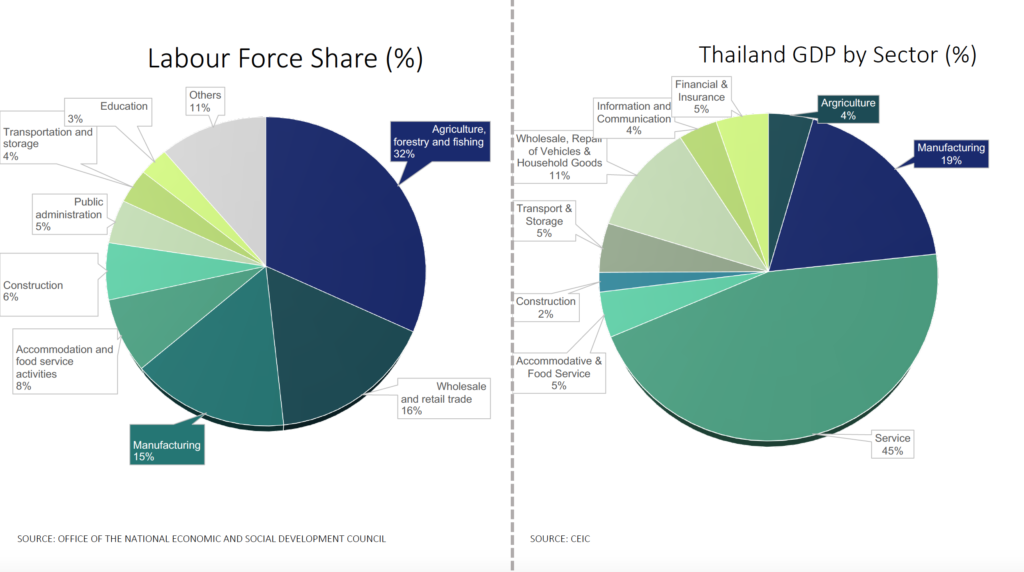 Property prices have fallen significantly on the back of the slowdown in the economy and the absence of foreign investors. Therefore, promoting Thailand as a destination in which to own a second home should boost demand for properties amongst foreigners. In response, the government is considering various schemes to make it more attractive for foreigners to stay for extended periods of time by offering incentives to invest in Thailand in exchange for long-term visas or permanent residency.

Also, attracting highly skilled labor into the country will not only boost our competitiveness but will underpin demand for property as well. Especially since Thailand’s workforce is aging rapidly, having more talented and skilled personnel could address this problem effectively. As such, the government should continue to relax its rules and regulations associated with work permits and start-ups. 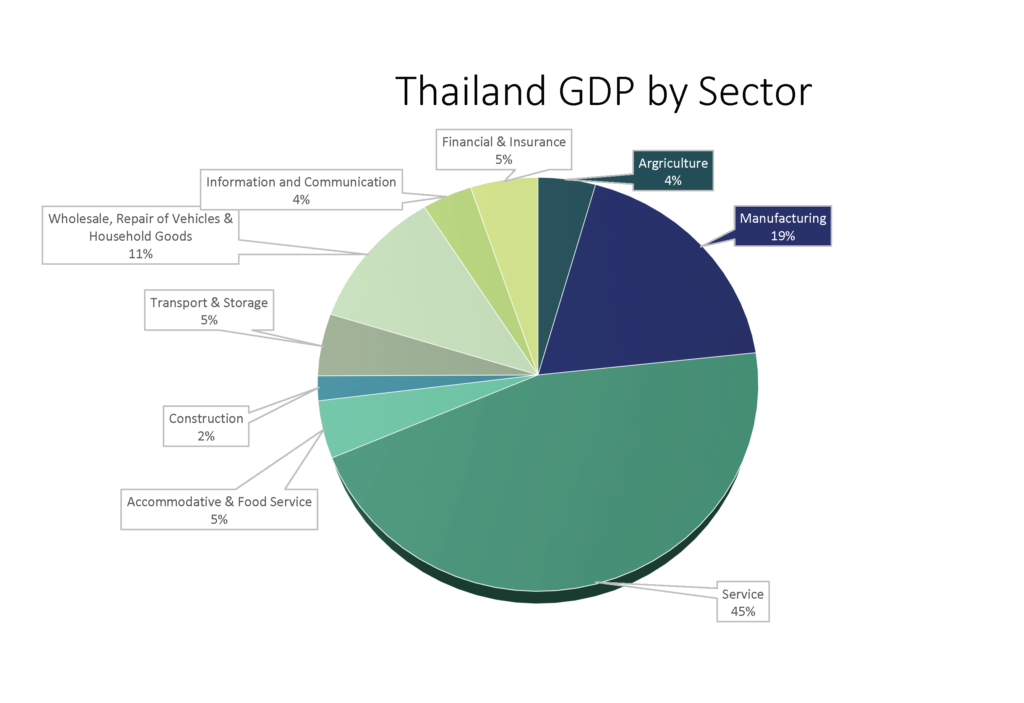 As they say, do not let a good crisis go to waste. The Thai government should address the issue of wealth and income inequality. Currently, roughly 30 percent of our workforce is in agriculture, but the sector accounts for only about 6 percent of our GDP. There are several ways to tackle this issue on a sustainable basis. Thailand needs a proper water-management system to reduce flooding and alleviate droughts. Alarmingly, Thailand experiences floods and droughts often in the same year and in the same region. With better water management, farmers could grow crops more efficiently. Further, we could aim for Thai farmers to switch out of rice and rubber into higher value crops. As a major agricultural producer, Thailand has yet to industrialize its farming like that of the United States. Without industrialization, there is no room for economies of scale, and, in turn, a massive number of manual laborers is still required. Smart farming can, then, take off and will lift productivity for the sector significantly.

Over the next couple of years, with its success in battling COVID-19, Thailand should use this opportunity to become a medical and wellness hub, as well as promoting Thailand as a place to live and work. In addition to modernizing our physical infrastructure within the Eastern Economic Corridor, restructuring the economy is urgently needed to propel Thailand into a new economic landscape. Solving a few key issues such as farming, deregulation and lack of skilled labor could be key to sustaining growth for the decades to come.

Environmental Times: Why Investors Will Keep Pushing into ESG

A good article. It is insightful and useful. Thanks