Top Posts
Challenges Remain, But There Are Opportunities to Be Had in...
Interview with Mr. Olukayode Pitan, Chief Executive Officer and Managing...
Commodities Outlook for 2023
The Value of Cash in a Time of Crisis: How...
The US-Africa Leaders Summit: Fostering a Closer Relationship with the...
Three Key Sectors in Which to Invest in 2023
Home Finance Why the BRICS Bloc Will Play a Crucial Global Economic Role in 2023
Finance 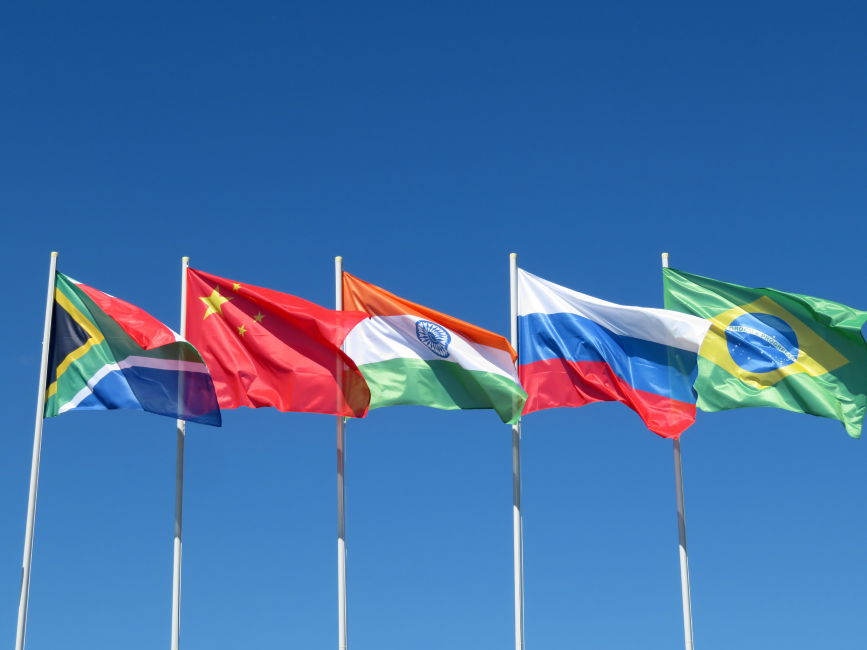 One of the clearest trends the world witnessed in 2022 was the accelerating eastward shift in global economic power. Much of this migration was initially achieved through the continued strengthening of the Shanghai Cooperation Organisation (SCO). With significant progress being made by the BRICS group of five major emerging economies—Brazil, Russia, India, China and South Africa—in terms of joint policy coordination and with several other economies showing clear signs of interest in joining the increasingly influential bloc, 2023 looks set to be the BRICS bloc’s most impactful year within the global economic and geopolitical landscape.

China is the clear economic powerhouse of the BRICS nations. Nominally the world’s second-largest economy—and the overall global economic leader when accounting for purchasing-power parity—China’s expansion and rapidly growing economic influence throughout the world will prove hugely significant for global economic development in 2023. Given its ostensibly unshakeable alliance with neighbouring BRICS member Russia, moreover, the two nations are already leading the way in offering the world a major counterbalance to Western political unions, such as the G7 (Group of Seven). And with India, Brazil and South Africa all having deep diplomatic and economic ties with either China, Russia or both, the BRICS collective is now becoming increasingly aligned across a number of important issues.

Indeed, research has shown that in the decade following South Africa’s formal acceptance into the bloc in 2010, which turned BRIC into BRICS, the five nations managed to coordinate policies across some 70 key issues. Some of its biggest achievements include the establishment of the New Development Bank (NDB), which is now financing key infrastructure projects across the world, as well as the creation of the BRICS Contingent Reserve Arrangement (CRA), a mechanism for providing support through additional liquidity and other means to BRICS countries during times of economic crisis. But as the world has become increasingly polarised over the last year or so, the bloc has stepped up efforts to advance its economic interests, which in turn is helping to cultivate robust alternative financial systems that are now rapidly expanding in their global appeal.

One of the most significant objectives the BRICS nations appear to be working to achieve is a shift away from reliance on the US dollar. Even before the outbreak of war in Ukraine, which seems to have expedited de-dollarisation initiatives across much of the non-Western world, Russia and China had embarked on clear policies of local-currency promotion, invariably at the dollar’s expense, as their relationships with the United States continued to deteriorate. By the first quarter of 2020, for instance, the dollar’s share of bilateral trade between the two countries fell below 50 percent for the first time on record, having been almost 90 percent just five years earlier.

“Such de-dollarization initiatives are happening largely under the radar of contemporary scholarship,” noted Zongyuan Zoe Liu and Mihaela Papa of Tufts University, Massachusetts, in their research paper “Can BRICS De-dollarize the Global Financial System?” published online by Cambridge University Press on February 24, 2022, the same day that the war between Russia and Ukraine broke out. “Leaders of these initiatives are reform-oriented rising powers, including strategic adversaries of the United States, that have expressed discontent with the existing US-led dollar-based global financial system.”

The 14th BRICS Summit on June 23-24 also saw the five nations—their combined population exceeding 40 percent of the world’s total—deliver a new 75-point declaration under the theme “Foster High-quality BRICS Partnership, Usher in a New Era for Global Development”. One of the stated key points was developing a common BRICS payment system (BRICS Pay) for retail payments and transactions among member countries. This only adds to the earlier work done by China and Russia to launch cross-border payment systems as alternatives to the US-led SWIFT (Society for Worldwide Interbank Financial Telecommunication) system.

Aside from China and Russia, other BRICS founding nations will likely step up their efforts to promote the bloc in 2023. Under the leadership of returning President Luiz Inácio Lula da Silva, Brazil is expected to leverage its status as a BRICS founding member to advance its own development and the economic progress of the wider Latin American region. “A Lula win, in conjunction with South Africa and India, should help the BRICS move back to its original role of being a counterweight to excessive US domination and therefore promoting South-South development,” Dr. Ralph Newmark, director of the Institute of Latin American Studies (ILAS) at La Trobe University in Melbourne, Australia, recently told the South China Morning Post.

Lula has also expressed interest in leveraging the BRICS contingent’s expanding global influence to bring a decisive end to the war in Ukraine. Celso Luiz Nunes Amorim, the foreign minister during Lula’s 2003-2010 presidency and a key Brazilian figure in the initial founding of the BRICS group alongside Russia, India and China, told Reuters in October that President Lula had the disposition and track record to contribute to peace talks. “He has the conditions to take part in a negotiating effort, which needs to be led by the European Union and [the] United States but with the participation of China, obviously. Brazil can also be an important country, whose voice resonates in the developing world,” Amorim said. “The BRICS as a group could help.”

But perhaps the most significant recent development from the BRICS bloc is the confirmation that the five member states are now seriously exploring the potential introduction of a BRICS reserve currency. According to Pavel Knyazev, deputy director of the Russian Foreign Ministry’s Foreign Policy Planning Department, the currency will be created to serve the BRICS nations’ economic interests better and will be based on a basket of their respective domestic currencies—the Chinese yuan, the Russian ruble, the Indian rupee, the Brazilian real and the South African rand. “The possibility and prospects of setting up a common single currency based on a basket of currencies of the BRICS countries [are] being discussed,” Knyazev said in early October, adding that member states are “actively studying mechanisms” to exchange financial information for a robust alternative global payment system.

This progress means that reports published in recent months of several countries applying to join the BRICS countries should come as no surprise. Indeed, Russian Foreign Minister Sergey Lavrov acknowledged that at least another dozen countries are interested in joining the bloc. “Interest in this global association is very, very high and continues to grow. It’s not just Algeria, Argentina, and Iran. In fact, there are more than a dozen such countries,” Lavrov said on November 8, adding that the group was in the midst of establishing formal entry requirements. “Since the applications are already being submitted officially, of course, we expect that working out the criteria and principles for admitting new members to BRICS will not take too long.”

So, which countries are these new candidates clamouring to join the bloc? In addition to formal applications having been received from Algeria, Argentina and Iran, it is widely believed that Saudi Arabia, Türkiye, Egypt, Afghanistan and Indonesia have also either applied already or are due to do so imminently. And additional media reports suggest that Kazakhstan, Nicaragua, Nigeria, Senegal, Thailand and the United Arab Emirates (UAE) have also expressed interest in joining the BRICS union.

Of this diverse mix of nations, it is Saudi Arabia that, if approved, will perhaps represent the most profound addition to the BRICS, particularly given the precarious global geopolitical climate at present. Ties between the Kingdom and the US deteriorated markedly in 2022, with US President Joe Biden’s request for OPEC (Organization of the Petroleum Exporting Countries) to expand oil production not only falling on deaf ears but seemingly inspiring the global oil cartel to take the opposite route and cut output by a mammoth two million barrels per day.

With Washington perceiving such drastic measures as Saudi Arabia siding with Moscow and thus threatening appropriate retaliation, the further souring of relations will only push Saudi Arabia towards the embrace of BRICS and Eastern economies in general. With China having already stepped up its overall investment in Saudi Arabia—the biggest recipient of China’s Belt and Road Initiative (BRI) infrastructure investment in 2021—the Gulf nation’s concerted shift away from the West and towards the East will surely see some or all of the BRICS nations benefit as a consequence.

Saudi Arabia’s state-owned oil company, Saudi Aramco, also confirmed in May 2021 that China’s energy security would be its highest priority for the next 50 years, while China is currently Saudi Arabia’s biggest trading partner, with more than $50 billion worth of exports last year—18 percent of the Kingdom’s total. And with Chinese President Xi Jinping arriving in Riyadh to a decidedly warm welcome in early December, bilateral trade and cooperation will only strengthen further in 2023. “Now it is the height of the bilateral relations between the two since their establishment of diplomatic relations in 1992,” Shaojin Chai, an assistant professor at the University of Sharjah in the United Arab Emirates, recently told CNN. “They become closer as both sides need each other in many areas: energy transition, economic diversification, defense capacity building for KSA and climate change, to name just a few…the diversification of security risk entails KSA including rising China in its hedge.”

Among the myriad of strategic and economic partnership deals and agreements signed during Xi’s visit, however, it was his confirmation to Arab leaders that China intends to buy oil and gas in yuan that is sure to be the most seismic political move to have happened during the Summit, as Beijing seeks to broaden global use of its currency, whilst concurrently loosening the international hegemony that the US dollar still commands.

What’s more, early November saw gas-rich Algeria formally apply to join the BRICS coalition, further emphasizing the potential magnitude of the bloc’s energy interests. “Algeria would definitely like to join BRICS. The question is whether we will be accepted, because there are certain obligations. We need to bring some of our legislative acts to a common standard,” the governor of the country’s capital, Algiers, Mohamed Abdenour Rabehi, told Sputnik in early December.

Will Buy Now, Pay Later Flourish or Fail During the Coming Recession?