Top Posts
Investing Trends for 2022
Popular Trends in Digital Banking for 2022
Digital Twins: Future Drivers of Smarter Decision-Making
Why Data Transparency Can Fuel Dynamic Growth for Fintechs
What Is Synthetic Data, and Why Will It Be So...
The Pandora Papers: What Do They Tell Us?
Home Finance Why US Real Estate Has Prospered During COVID
Finance 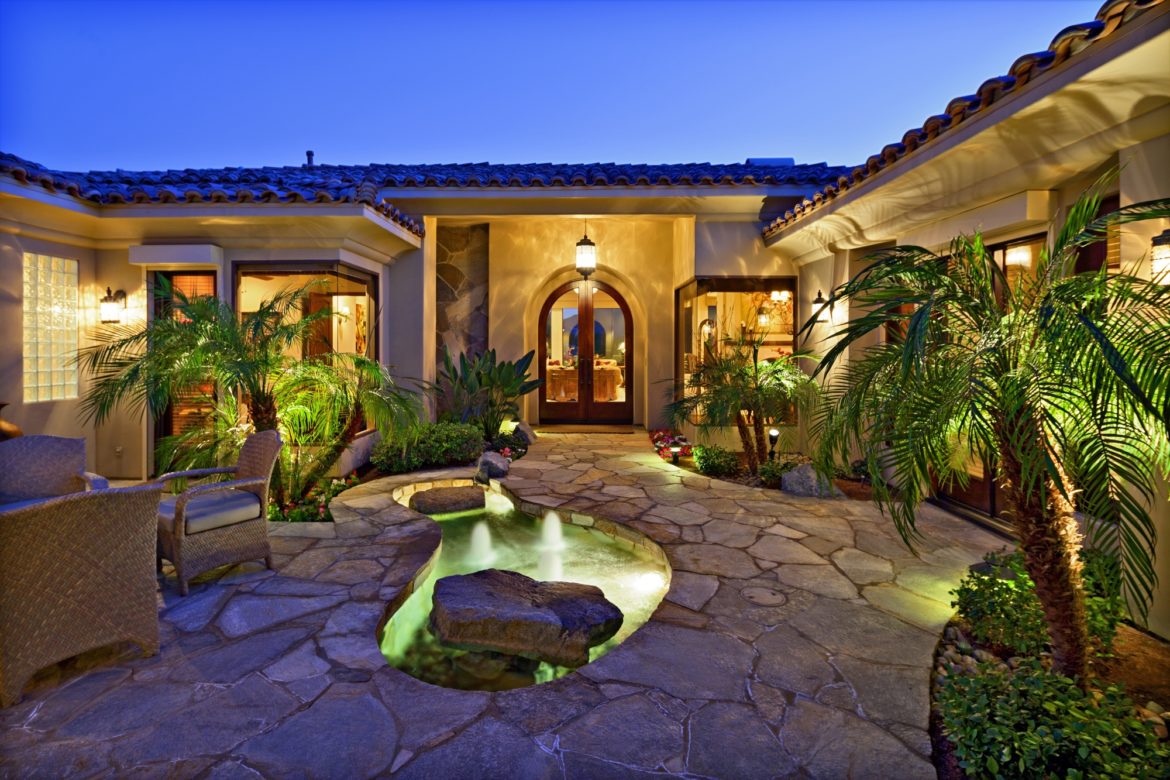 It is safe to say that the majority of financial markets experienced unparalleled levels of turbulence in 2020. A global pandemic caused a sharp worldwide economic contraction, leaving a spate of global markets decimated—in many cases, both demand and supply were severely affected. The devastation has been nowhere as apparent as it has been in the United States, where the virus continues to wreak havoc, with the daily death rate remaining well above 3,000. But although most US markets endured bearish periods during 2020, the real-estate market was one of the few to experience continuous sustained growth, as house prices rose consistently throughout the year.

Of course, house-price appreciation in the US is nothing new. Since January 2012, prices have risen almost continuously by around 70 percent on average across the nation. But with the coronavirus severely impacting household incomes, it would only be reasonable to assume that the resultant lack of income security would have a dampening effect on demand for homes. Indeed, according to figures published in November by the US Congressional Research Service, nearly half of all American households had experienced “at least some loss of employment income since March 2020, when the economic effects of the pandemic first became apparent”.

And yet robust demand for homes coupled with decidedly constrained supply have allowed the housing market’s bullishness to continue throughout 2020—a bullishness that is expected to remain throughout the coming year at the very least. The outbreak of the pandemic at the end of 2020’s first quarter initially saw home sales plummet, as uncertainty gripped the country and led to a nosedive in market interest for both buying and selling homes. Government directives such as shelter-in-place and social-distancing requirements meant that buyers were discouraged from seeking new accommodations, while sellers were less keen on listing their properties and interacting with prospective buyers.

In April and May, therefore, home sales plunged to their lowest levels since the aftermath of the 2007-09 global financial crisis over a decade before. But activity subsequently rebounded, with sales surging over the summer and throughout the latter half of the year. Sales of previously owned houses reached a 15-year high in October, before marginally declining a month later. 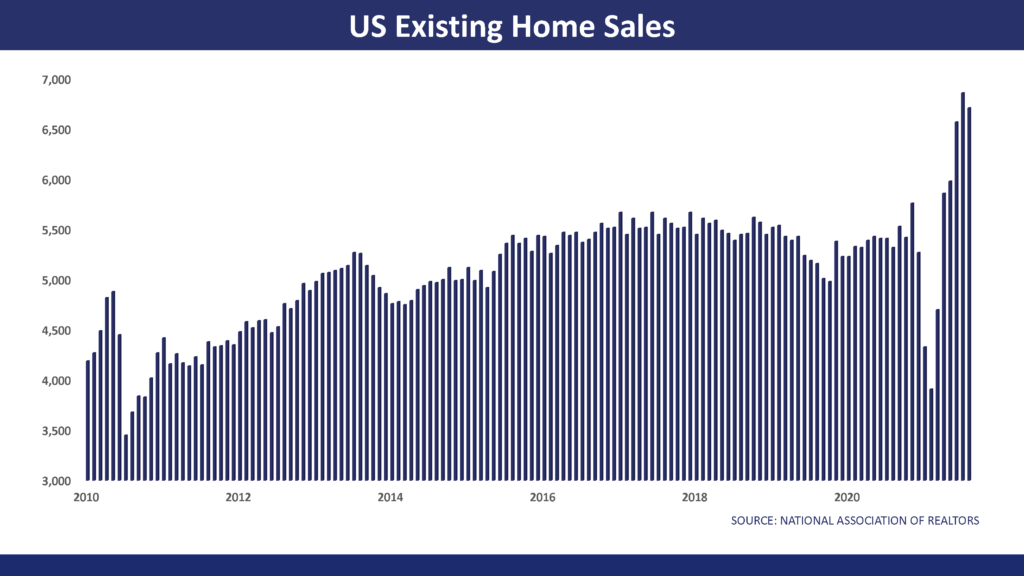 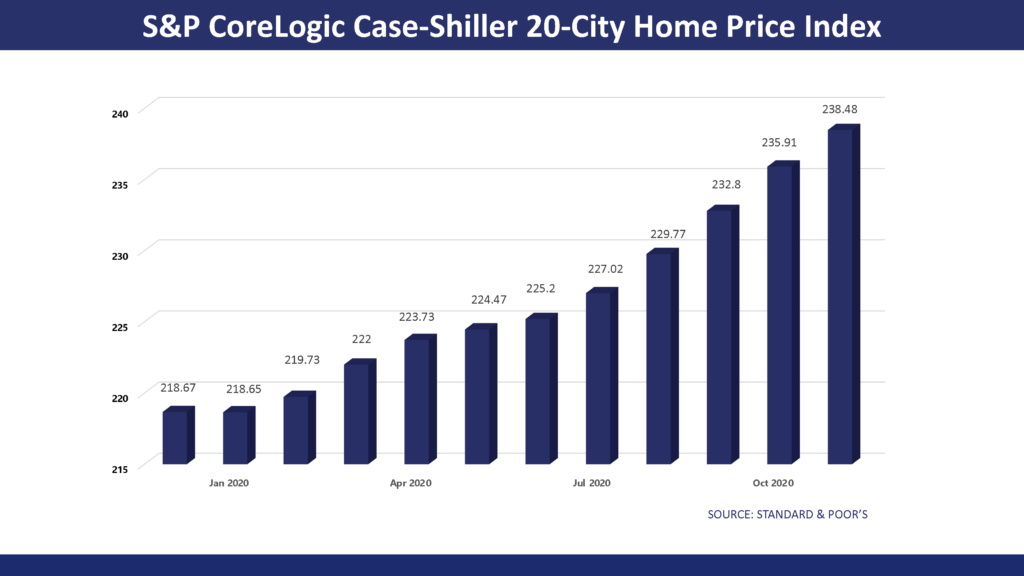 So, why has this been the case? It would seem that a combination of higher housing demand and limited supply has contributed to the appreciation. From a demand perspective, buyer interest has surged since the summer on the back of a significantly expansive monetary policy adopted by the Federal Reserve System (the Fed). In early March, the Fed cut rates by 50 basis points, before lowering them again 10 days later to its lower bound of 0-0.25 percent. The US central bank has also bought substantial volumes of mortgage bonds since March 2020—it purchased $300 billion of the debt securities backed by US home loans during each of March and April, followed by a further $100 billion per month since then, which has helped to send mortgage rates repeatedly to new record lows during the year. As such, prospective homebuyers were incentivised in 2020 to take advantage of the historically low rates and purchase a home, with the International Monetary Fund (IMF) noting that the housing demand was largely prompted by a “fear of missing out” on such attractive rates.

On the supply side, meanwhile, there has been a much greater reluctance from homeowners to sell their homes during the pandemic. A handful of states have stay-at-home orders still in place, while mask mandates and some degree of restrictions on business are currently in effect throughout most states. As such, the pandemic has only emphasised the need for residents to remain in their homes while authorities strive to bring the spread of the virus under control. The coronavirus’s highly infectious nature has further underlined the tendency for people to remain in their current dwellings and follow the new social-distancing norms.

This dearth of supply has underpinned much of the positive price action the US real-estate market has witnessed over the last year or so. Indeed, even when home sales fell in April and May, the low existing inventory of houses meant that prices remained resilient in the face of declining demand. And when demand surged during the following months, the supply of houses remained muted, with concerns surrounding the transmission of COVID-19 and economic anxiety keeping homeowners in their existing homes. “New listings, despite improving from their April lows, were only slightly higher than one year ago through August,” the Federal Reserve Bank of St. Louis noted in October. “As a result, inventory continued to decline: In August 2020, there were less than two-thirds the number of homes on the market as there were in August 2019.”

In a clear attempt to prevent another full-blown housing-market crash in the same vein as the global financial crisis, moreover, US authorities have been significantly more proactive in ensuring the pandemic does not put homeowners under any undue pressure. Specifically, it has provided relief in the form of a foreclosure and eviction moratorium, which was enacted in March and prevents direct mortgage servicers from any new foreclosure action as well as suspending any in progress for single-family properties insured by the Federal Housing Finance Agency (FHFA). “Extending Fannie Mae and Freddie Mac’s foreclosure and eviction moratoriums through January 2021 keeps borrowers safe during the pandemic,” said FHFA Director Mark Calabria. “This extension gives peace of mind to the more than 28 million homeowners with an Enterprise-backed mortgage.”

Will house prices continue to rise in 2021? Given how far the US remains from achieving any semblance of normalcy due to the coronavirus, it would seem that restrictive measures will force the Fed to keep its accommodative monetary policy in place for some time to come. Indeed, it stated in late January that it planned to keep its benchmark rate near zero, where it is likely to remain until at least next year, if not longer. The Fed’s review of its monetary-policy framework, which was completed last year, concluded that a new policy framework that “seeks to achieve inflation that averages 2 percent over time” will also ensure that rates remain low until inflation at least moves above its target. Such a scenario seems highly unlikely to transpire in 2021.

“Circumstances are far from being back to the pre-pandemic normal. However, the latest stimulus package and with the vaccine distribution underway, and very strong demand for homeownership still prevalent, robust growth is forthcoming for 2021”, Lawrence Yun, chief economist for the National Association of Realtors (NAR), stated in December. Yun expects home prices to rise by 3 percent in 2021, further underlining that the strong bullish sentiment the US real-estate market experienced during a COVID-wracked 2020 is not going away anytime soon.