Top Posts
Challenges Remain, But There Are Opportunities to Be Had in...
Interview with Mr. Olukayode Pitan, Chief Executive Officer and Managing...
Commodities Outlook for 2023
The Value of Cash in a Time of Crisis: How...
The US-Africa Leaders Summit: Fostering a Closer Relationship with the...
Three Key Sectors in Which to Invest in 2023
Home Finance Will Brazil Follow Its Neighbours by Turning Left in Its Upcoming Election?
Finance 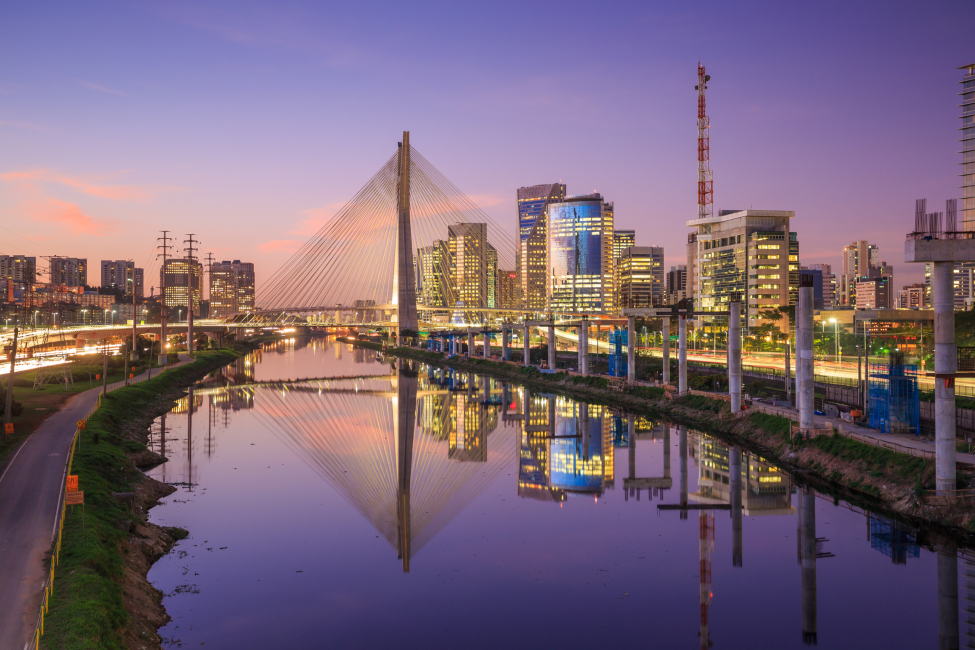 On October 2, an estimated 150 million Brazilians could head to the polls to vote in the country’s general election, an event sure to have seismic repercussions for Latin America’s political and economic future. With the head of the Workers’ Party, Luiz Inácio Lula da Silva (Lula), the prime contender to unseat the current president, Jair Bolsonaro, it marks yet another country—and the economic heavyweight of the region—turning towards leftist rule, with yet another right-wing populist looking set to fall by the wayside.

Indeed, if recent polls are anything to go by, then Lula, Brazil’s president from 2003 to 2010, will defeat Bolsonaro at a canter. The former leader currently holds a comfortable edge over the incumbent, receiving 47 percent of voter support versus 32 percent for Bolsonaro, according to a survey published on August 18 by consulting firm Datafolha. Should Lula receive more than 50 percent of the votes in the first round of the election on October 2, moreover, there will be no need for a second round against Bolsonaro on October 30. And even if he falls short of that 50-percent threshold, Datafolha nonetheless has Lula beating Bolsonaro with 54 percent of the vote in the second round.

Securing the coveted presidency would mark a dramatic reversal of fortune for Lula, charged with corruption and sentenced to nine years of imprisonment in 2017. But with the Supreme Court annulling those charges last year, the door has been reopened for the former president to run for office once more. And he seems to be grabbing the opportunity with both hands. Launching his election campaign on August 16 in the mega-city of São Paulo, Lula immediately went for the jugular. “If there’s anyone who is possessed by the devil, it’s this Bolsonaro,” he declared, urging those in attendance to duly punish the president for his disastrous handling of the COVID-19 pandemic.

Indeed, despite cruising to victory in 2018, Bolsonaro’s response to the virus, which has taken nearly 700,000 lives in the country, has badly dented his popularity during his four-year term. A senate inquiry into the government’s handling of the pandemic has provided perhaps the most damning indictment of Bolsonaro’s presidency, with his rejection of offers from vaccine manufacturers during the first year of the outbreak deemed to be tantamount to murder. As such, the senate report, published in October 2021, suggested that Bolsonaro should face murder charges for this negligence.

“In spite of all the vaccines that were on offer, the federal government opted not to buy them, a decision that went against all of the scientific studies which demonstrated their safety and effectiveness, and against the advice of all of the epidemiologists who declared on a daily basis that only vaccines would save lives,” the report found. “The decision not to acquire vaccines between the months of July 2020 and at least January 2021, which lacked any technical or scientific basis, and flew in the face of recommendations from international health authorities, ended up claiming the lives of thousands of Brazilians who would undoubtedly have made use of such vaccines.”

Bolsonaro’s opinions on the pandemic have been even more defeating for his re-election prospects. “In which country did people not die? Tell me! Look, I didn’t come here to be bored,” was just one of his scarcely believable responses to journalists who deigned to quiz him on his COVID record, on this occasion shortly before the release of the congressional report. The president also infamously rejected calls to implement lockdowns and wear masks as measures to control the spread of the virus, and he even went so far as to veto legal provisions to make mask wearing mandatory in churches and overcrowded prisons. The Brazilian Supreme Federal Court has also launched a criminal investigation into potential corruption within the Bolsonaro Administration’s health ministry pertaining to a 1.6-billion reais ($315-million) contract for procuring 20 million doses of Indian pharma company Bharat Biotech’s COVID-19 vaccine.

The investigation marks just one of several allegations of corruption that have dogged his presidency and administration. In June, for instance, a former minister of education, Milton Ribeiro, was arrested by the Federal Police of Brazil for crimes related to the management of funds from the National Fund for Educational Development (FNDE), which he allegedly transferred to evangelical pastors allied with Bolsonaro. “The former minister and the neo-Pentecostal pastors accused of corruption are in jail. In an audio leaked in March, pastors admitted that the Brazilian president asked to give money to ‘pastor Gilmar’s friends’ as a priority,” Nacho Lemus, correspondent of the television network teleSUR, tweeted.

Accusations against Bolsonaro himself also surfaced in July 2021 pertaining to his involvement in a scheme in which he received a portion of public salaries from the close associates he hired. Locally known as rachadinha, the scheme has already brought charges against the president’s eldest son and federal senator, Flávio Bolsonaro, in another similar case.

Given that the pandemic dominated his tenure as president, moreover, Bolsonaro’s economic record has been decidedly underwhelming. The economy has failed to deliver a sustained recovery this year, with official figures showing that gross domestic product (GDP) grew by just 1 percent in the first quarter. And with double-digit inflation and sharply rising borrowing costs boosting the likelihood of another expected downturn transpiring later in the year, any hopes of a sizeable rejuvenation for the economy in time for the election are slim.

That said, Brazil’s unemployment is currently at a seven-year low of 9.3 percent, which should help provide a bump in the polls for Bolsonaro. Polls may also start to narrow thanks to Bolsonaro’s recent promise to extend a cash welfare program that provides 600 reais ($109) in monthly payments to some 20 million low-income Brazilian families, should he be re-elected. “I think the numbers will probably tighten as we get closer to the vote…which still puts Lula in front, but not by a huge margin,” Thomas Shannon, the US ambassador to Brazil under former US President Barack Obama, told British news publication The Guardian.

Nonetheless, it seems only inevitable that with the central bank lifting its benchmark SELIC (Sistema Especial de Liquidação e Custodia) rate from 2 percent to 13.75 percent in the space of fewer than 18 months, the remainder of the year will be characterized by a weakening economic environment. “Growth kicked off 2022 at full speed, but may end the year with its foot off the pedal—if not a shift into reverse,” Brazilian economist Adriana Dupita told Bloomberg in June. “First-quarter growth was driven largely by the effects of economic reopening, but we expect the economy to hold stable or even mildly contract in the quarters ahead, especially as the lagged effects of steep rate hikes since March 2021 materialize.”

In stark contrast to the Bolsonaro economic regime over the last four years, meanwhile, Lula is pursuing, unsurprisingly, a decisively left-wing economic agenda involving much greater levels of state intervention and regulation. Some of the key policies of his agenda, for instance, include a major fiscal overhaul to end constitutionally mandated caps on government spending and thus raise overall spending levels, as well as enact major reforms to the tax system to ensure Brazil’s rich pay more income tax and its poor pay less. “Let’s put the poor and the workers back into the budget,” according to Lula’s official policy manifesto. “For this, it is necessary to revoke the spending ceiling and review the current Brazilian tax regime, which is dysfunctional and has totally lost its credibility.”

Lula also wants to adopt a more interventionist and tightly regulated central bank exchange-rate policy to combat inflation. “The passive orientation towards exchange rate policy in recent years has increased the volatility of Brazil’s currency against the US dollar, with perverse consequences for the consumer price index,” the manifesto said. Economist Pedro Rossi, who leads Lula’s policy team, also criticised the central bank for its laissez-faire attitude towards the currency, which has led to pronounced volatility. In contrast, a Lula government would use the exchange rate as an instrument for development, according to Rossi. The exchange rate must “adapt to the balance of the Brazilian economy,” he recently explained to Dubai-based news outlet Zawya. “But it must correct market failures, dysfunctionality, poor pricing. It makes no sense to have the most volatile currency in the system…among the most important currencies, and not do anything about it.”

And while private-sector deforestation within what many consider Brazil’s most prized possession, the Amazon, dramatically accelerated to a 15-year high last year under the Bolsonaro Administration, Lula has pledged to limit such activity severely, calling for the establishment of a “net zero deforestation” goal. Lula has also outlined his Workers’ Party’s firm opposition to the current government’s ongoing plans to privatise the likes of power-utility giant Eletrobras, postal service Correios, state oil firm Petrobras and PPSA (Pré-sal Petróleo S/A), which represents the government’s interests in oil and gas production-sharing, unitization and co-participation contracts.

As far as Brazil’s banking sector is concerned, meanwhile, Lula is seemingly intent on boosting the presence of state-owned banks, including the development bank BNDES (National Bank for Economic and Social Development). “We will also strengthen public banks—such as Banco do Brasil, Caixa Econômica Federal, BNDES, BNB, BASA and FINEP—in their mission to foster economic development, as well as social and environmental aspects and in the provision of long-term credit and guarantees in structuring projects, committed to the financial sustainability of these operations,” according to the manifesto.

Given such stark contrasts between the two leading candidates, it is no surprise that many expect the upcoming election to be highly charged; indeed, the rhetoric is already being cranked up considerably. Reminiscent of former US President Donald Trump’s accusations observed in the 2020 US general election, Bolsonaro—who has often been described as “Brazil’s Trump”—has repeatedly questioned the security offered by Brazil’s electronic voting systems, despite producing no evidence to support his claims. Nonetheless, the president insists the system is marred by widespread fraud and has even threatened to cancel the elections should his concerns fail to be addressed by the authorities. Should the elections go ahead, moreover, the right-wing leader has indicated he might not accept the results if the electronic system does not produce printed receipts that can then be used for a recount of votes.

But he has also recently summoned the will of his millions of supporters to fight should he not be re-elected, again mirroring the actions of former President Trump in January 2021, which infamously led to the deadly riots at the US Capitol Building housing the US Congress. “If need be, we will go to war,” Bolsonaro said in June. In response, Lula recently described Bolsonaro as “a cheap copy of Trump”. Pro-democracy rallies have also broken out in Brazil’s biggest cities, including São Paulo, Rio de Janeiro, Brasília and Recife, largely out of concern that Bolsonaro will refuse to leave office in the event of an electoral defeat in October. The protestors have been making themselves heard across the country, however, banging pots and pans and shouting slogans such as “out with Bolsonaro” and “respect the vote”.

Investors Are Discovering the Untapped Potential of Saudi Arabia