Top Posts
How Technology Is Helping to Solve Global Supply-Chain Issues
UK Inflation Climbs to Fresh 40-Year High
Extended Reality and the Metaverse Are Leading Financial Services into...
Digital Currency: India’s Move Towards a Digital Financial System
Algarve Snapshot: The Growth of Overseas Buyers
Will London Have to Send More Banking Jobs to the...
Home Finance Will Hong Kong’s Economy Suffer Because of the Protests?
Finance

Will Hong Kong’s Economy Suffer Because of the Protests? 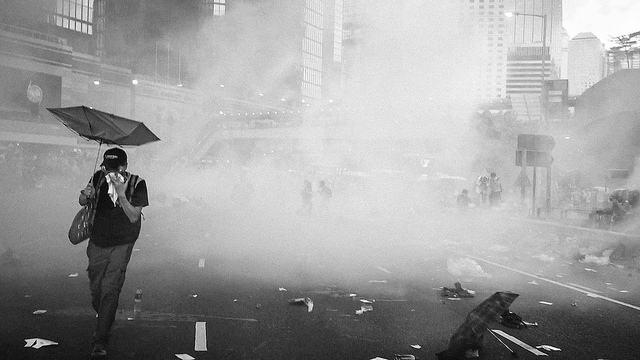 On Monday, October 6, protestors took down their barricades in front of government offices, allowing state workers to commence work, and permitted some businesses to re-open—more than a week after the demonstrations had started. This came after the Hong Kong government met with protest leaders, warning them of the consequences of continued demonstrations. The demonstrators have given in to the requests of the government to allow government offices to re-open. But the talks between the protestors and the government have no clear resolution. The university students who are calling for a reform of the electoral system have vowed to continue their civil disobedience until the Hong Kong government heeds their calls.

The protests in Hong Kong, which started during the last week of September, have caused the closure of roads, the disruption of the public transportation system as well as the temporary shutdown of business establishments. Tens of thousands of Hong Kong citizens, mostly university students, have taken over the streets, calling for the Hong Kong government to change its rules about elections.

The protestors are asking for two things.

First, the protestors want more political freedom—in particular for the government to allow its citizens to nominate and elect the chief executive of Hong Kong, contrary to the current electoral system. Under the present system, it is China that nominates candidates for the highest post in Hong Kong’s government; China’s electoral committee, composed of tycoons and oligarchs, vet the candidates for the post.

The demonstration is being organized by a group called Occupy Central with Love and Peace, which is under the leadership of Benny Tai Yiu-ting, a law professor of the Hong Kong University. The ongoing civil disobedience has earned the moniker of Umbrella Revolution, given that the umbrella became a symbol of protest after demonstrators used umbrellas to protect themselves from the pepper spray of police officers.

Although the demonstrations have slowed down, allowing the resumption of work for government workers and employees of businesses such as banks, keeping demonstrators from taking over the streets of Hong Kong again will be challenging since negotiations between the government and the Umbrella Revolution members are still deadlocked. Demonstrators have promised not to stop their civil disobedience until the Hong Kong government heeds their calls for reform.

“It’s clear there is still discrepancy between the expectations from both parties towards the dialogue,” Lester Shum, vice secretary-general of the Hong Kong Federation of Students, told the press after the meeting between protestors and government officials on Sunday, October 5.

There is no conclusion yet to the ongoing conflict in Hong Kong, and financial experts are beginning to offer their thoughts on how the actions of the Umbrella Revolution will affect Hong Kong’s economy. Most analysts have expressed their beliefs that the economy will not suffer a great loss if the demonstrations are immediately put to an end.

The World Bank for its part noted that there is still no major impediment to Hong Kong’s economic growth despite more than a week of occupation of the major thoroughfares as well as the central business district. “At this stage, our best estimates…are that there isn’t as yet significant spillover to the broader Chinese economy, but it is still something that we and others will continue to watch,” warned the World Bank’s chief Asian economist Sudhir Shetty. He added that the growth of both Hong Kong and China can be adversely affected if the protests are prolonged. “The impacts will be both on the Hong Kong Special Administrative Region itself, their economy, but also in terms of the broader impact on the Chinese economy.”

Other financial analysts have echoed some of the sentiments of the World Bank.

Fitch Ratings, a credit-rating agency that gave Hong Kong a rating of AA+ with a stable outlook two weeks before the demonstrations began, has said that the credit standings of the region will remain the same if the demonstrations end soon. “We don’t expect the protests to have a rating impact in the short term. It would be negative if the protests are on a wide enough scale and last long enough to have a material effect on the economy or financial stability, but we don’t currently see this as very likely,” Andrew Colquhoun, head of Asia-Pacific Sovereigns of Fitch, said.

Likewise, other analysts and experts also remain hopeful that there will be no severe adverse effects of the civil disobedience by the Hong Kong students. David Cook, an economics professor of the Hong Kong University of Science and Technology, stressed that the economies of other countries that have suffered similar protests managed to grow even after weeks of demonstrations. “I do note that neither the Occupy Wall Street demonstrations nor the London riots in 2011 had noticeable long-term impact on those financial centers,” Cook explained. “I am confident Hong Kong will continue to be a safe place to do business, and the rule of law will remain strong.”

But some industries have expressed that they are already feeling the negative consequences of the Umbrella Revolution. For example, the Hong Kong Federation of Restaurants and Related Trades announced that they are likely to see lower profits by as much as 30 percent for 2014.

Hong Kong’s tourism industry is also likely to take a hit; there has already been an interruption of travel to the region. Amy Lam, Hong Kong Tourism Board spokeswoman, noted, “We do not have the number of visitors being affected. However, it is believed that some visitors will postpone or cancel their plans to visit Hong Kong for the time being.”

Beijing has retracted the travel permits of tourists from mainland China, who were already scheduled to visit Hong Kong. This is a considerable loss, since the region gains around $38 billion from the visits of Chinese tourists to Hong Kong.

Financial markets still remain unhurt by the ongoing demonstrations, according to Hong Kong’s financial secretary, John Tsang Chun-wah, but may suffer losses if the protests continue. “Up to now there is still no indication that the protest will end in the near future,” he noted. “If the protest drags on, the social conflict may become more acute.”

What is the EU’s Alternative Investment Fund Managers Directive?

Three-Way Bank Merger in Malaysia Worth $22.3 Billion Is Underway