Top Posts
Is It Time to Explore an Alternative to Fractional-Reserve Banking?
Can AgTech Prove Instrumental in Helping to Feed the World’s...
Can the Indo-Pacific Economic Framework Expand US Economic Influence in...
Banks Remain Uniquely Vulnerable to Sophisticated Cyber-Attacks
Western Banks Willing to Accept the Short-Term Pain of Russian...
Why the US Is Ramping Up Its Presence in Somalia...
Home Finance World-Class Pandemic Management Key to Taiwan’s Economic Success
Finance 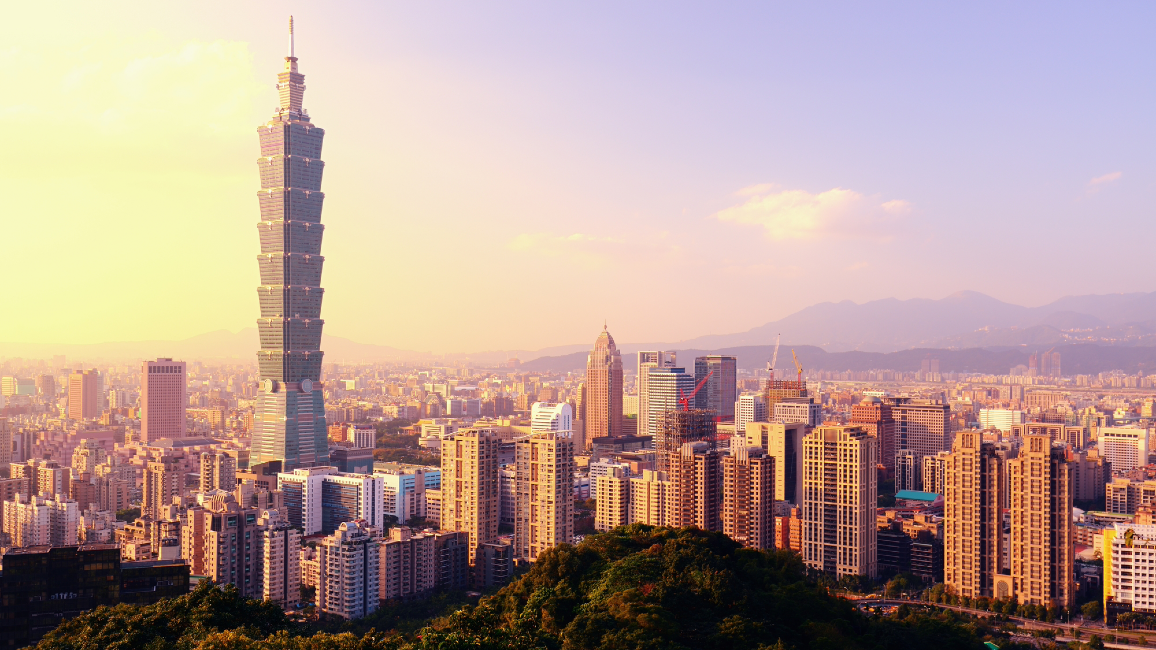 It was not too long ago—late 2015/early 2016 to be precise—that the Taiwan economy was grappling with a potentially devastating recession as growth in gross domestic product (GDP) fell into negative territory for the first time in six years. With cooling demand from China, there was growing concern over the long-term prospects of the export-heavy nation. Fast forward to today, however, and estimates suggest that Taiwan’s GDP will have outpaced its neighbouring superpower for the first time in 30 years. The island nation ended the year as Asia’s top-performing economy in 2020. And its exemplary handling of the COVID-19 pandemic lies very much at the heart of this stellar performance.

With just 937 cases and 9 deaths in total to date, Taiwan can lay serious claim to having the world’s most effective response to COVID-19, an assertion that is all the more astonishing given its proximity to China, from where the virus is widely thought to have originated. Nonetheless, the diminutive island nation deserves much praise for taking decisive measures early on, including two-week quarantines for all people entering the country, strict travel restrictions, quick and easy access to rapid-testing centres and a national facemask mandate that prevented citizens from entering public buildings without the appropriate face coverings. And within hours of learning of its first new COVID-19 transmission in around nine months, Taiwan authorities recently took swift, decisive action to announce new social-distancing rules, reinstate tighter mask mandates and fine the perpetrator who brought the virus back into the country the maximum permissible amount of NT$300,000 ($10,700).

In many ways, Taiwan has been well prepared for the coronavirus’s arrival. The country learned harsh but important lessons in 2003, when it dealt with a SARS (severe acute respiratory syndrome) outbreak that ended up in 668 cases and 181 fatalities. This ensured the country was primed for any future pandemics, with several trained specialists at the ready to adequately deal with COVID-19 and confidently assure the public of the measures being taken. By July, for instance, the country’s Central Epidemic Command Center (CECC), which was set up to combat severe infectious outbreaks, announced it would conduct weekly interviews to address the progress being made. “I think for me, this was an emotional milestone, because I trust the CECC—their work and transparency has been exemplary,” local journalist Catherine Shu told CNBC, “and I took that as a signal that I could finally let myself relax a bit.”

Although border controls remain in place, a strong rebound in domestic consumption is now transpiring, allowing the Taiwanese economy to embark upon a sustained economic recovery. Indeed, the nation saw its third-quarter year-on-year GDP hit 3.92 percent, which is the highest it has been in more than four years. 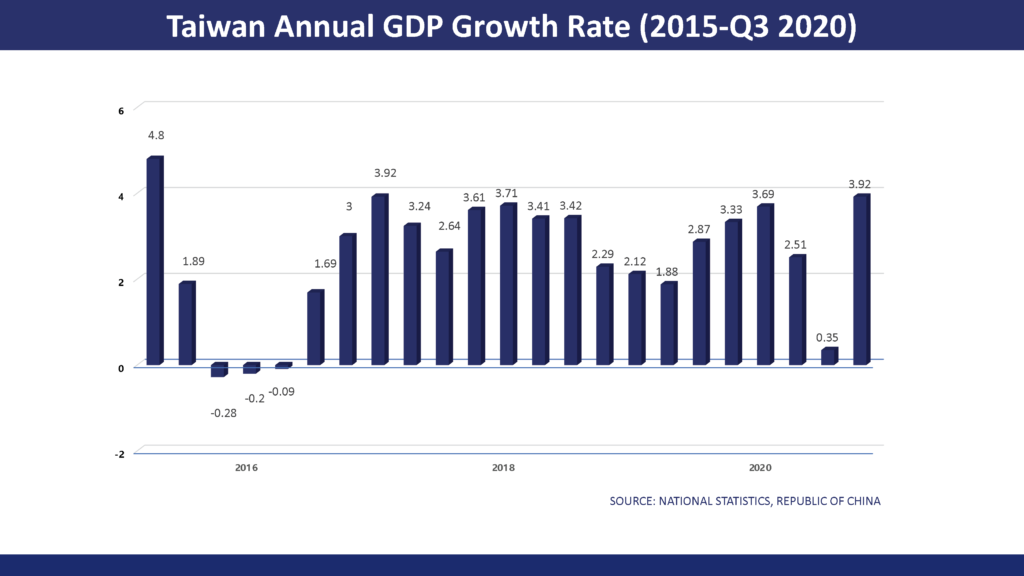 And now the latest advance estimates by Taiwan’s statistics office pegs the nation’s economic growth in 2020 at a very respectable 2.98 percent, which not only edges out China but also the 2.9-percent growth posted by Vietnam, which many had predicted would be Asia’s fastest-growing economy for the year.

Part of this consumption boom can be attributed to the surge back into the country of Taiwanese citizens who normally live abroad. Thanks to the country’s globally renowned management of the pandemic, Taiwanese people located all around the world have preferred to return to their home country, where the risk of transmission is among the lowest in the world. Taiwan’s National Immigration Agency recorded a net inflow of 251,640 Taiwanese into the country in 2020, nearly fourfold more than 2019’s levels. Similarly, foreign workers who were already in Taiwan have delayed travelling back to their homes as much as possible to prevent returning to high-risk countries. “Our strong public health performance is a once-in-a-lifetime chance to turn the tide and convince more Taiwanese people to come back and foreign friends to move here,” according to a senior official from the presidential office.

With people preferring to remain in Taiwan, this significant net inflow is helping to expand domestic consumption—the third quarter saw private consumption climb by 5.2 percent annually, which is the fastest growth rate seen in almost a decade. Given that this consumption growth is being driven by the affluent contingent of the population who would otherwise reside elsewhere, moreover, the market for luxury goods in Taiwan has received a particularly strong shot in the arm. And with an increasingly strained relationship fomenting with China, which has further incentivised Taiwanese workers to return home, along with concrete measures being taken by the government to raise Taiwan’s appeal as a hub for foreign talent, such as through its attractive Gold Card employment visa, the country could experience a sustained rise in high-skilled, high-income and ultimately high-consumption residents for some years to come.

Taiwan’s robust economy has also been supported by strong global demand for its exports during the year, particularly during the latter quarters when exports soared to all-time highs. 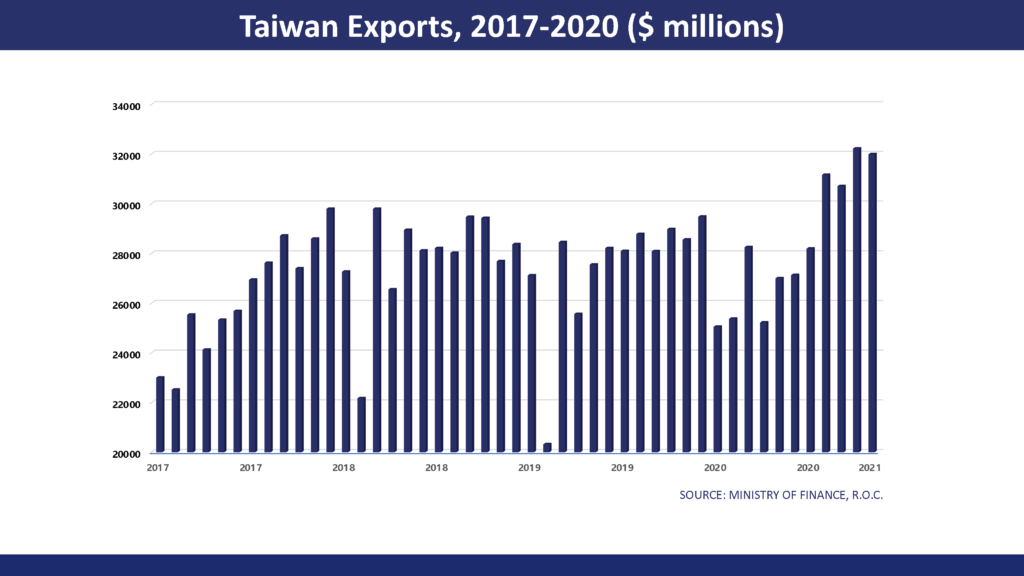 November saw export orders jump by 29.7 percent—the biggest increase since May 2010—to a record high of $57.8 billion. Much of this strength can be attributed to strong global demand for semiconductors, telecommuting products and electronics, including smartphones, which grew 23.9 percent during the year, according to Taiwan’s Ministry of Economic Affairs. Taiwanese firms such as Hon Hai Precision Industry, Wistron and Pegatron, for instance, are heavily involved in the manufacture of the iPhone. And with stay-at-home directives confining much of the world to working and studying from their homes during the pandemic, demand for Taiwan-made technology products such as laptops has been significant in boosting exports.

The ongoing trade war between the United States and China is also playing a major role in Taiwan’s economic recovery. The Taiwan central bank recently acknowledged that the nature of US trade policies towards China in large part explains why its trade surplus with the US has been on the rise. The administration of former US President Donald Trump had been particularly averse towards Chinese tech firms such as Huawei, whilst also expressing support for democratic Taiwan, with both countries now viewing China with increasing scepticism. Not only has this possibly persuaded more Taiwanese nationals to move back to their home country, but it is also prompting investment to return to Taiwan’s shores. With many Taiwanese factories that manufacture products for the US market having once been located in China, US-Sino trade unrest is now pushing those companies to redirect their production back to domestic shores. Between January 2019 and September 2020, more than NT$1.1 trillion ($38 billion) of Taiwanese investment had returned home, according to Economic Affairs Minister Wang Mei-hua, with tech-manufacturing heavyweights InnoLux, Accton Technology and Quanta Computer among those building new factories in Taiwan.

Mei-hua also confirmed that supply chains for electric-vehicle manufacturers, including Tesla, are heading to Taiwan to set up production facilities and signalled that much of the recent reshoring comes on the back of intellectual-property concerns being expressed by US customers. “It’s upstream companies that determine the direction of Taiwanese investment,” Roy Chun Lee, deputy executive director of the Taiwan WTO & RTA Center at the Chung-Hua Institution for Economic Research, told The Straits Times newspaper in September. “The general trend is the creation of a second-track supply chain that is less reliant on China.” In October, the government confirmed that it had drawn in nearly 700 companies to invest in Taiwan since late 2018 and expects to have amassed investments of more than NT$374 billion ($13 billion) in 2020, thus contributing around 1.7 percent towards economic growth.

Will a similar US trade policy endure during the new Biden administration’s tenure? With regards to the trade war, there are many signs the new president will take a more multilateral approach towards its Asian economic rival, whilst he has also previously admitted that he doesn’t regard China as direct competition. “So long as Washington retains a strong military position along the first island chain, regional powers—from Vietnam to Taiwan to Japan—will try to resist China’s rise rather than accommodate it,” Biden’s national security adviser, Jake Sullivan, wrote in May 2020.

The Taiwan government’s Directorate-General of Budget, Accounting and Statistics expects GDP to grow by 3.83 percent in 2021. This only further underlines how well the country has handled the pandemic and continues to do so, with few other countries set to register positive growth for both years. With the pandemic far from over, and with further waves hitting important export markets including the US and Europe, the demand for Taiwan’s tech products is expected to remain robust through the year.

Of some concern, however, is the recent appreciation of the Taiwan dollar, which has a growing number of analysts suggesting the country may be labelled as a “currency manipulator” by the US, an undesirable title it last held almost 30 years ago. According to the US Department of the Treasury, countries must have at least a $20 billion-plus bilateral trade surplus with the US, a foreign currency intervention of more than 2 percent of GDP and a global current account surplus of more than 2 percent of GDP to be classed as a manipulator. Taiwan’s trade surplus with the US was $23 billion in 2019, and its current account surplus was a whopping 10.5 percent of GDP. This prompted the US Treasury under the previous administration to add Taiwan to a “monitoring list” of countries for the first time since 2017.

“We hope to cut the trade surplus with the United States,” the central bank’s deputy governor, Yen Tzung-ta, acknowledged. “This is the long-term solution.” But with the Taiwanese dollar having strengthened by around 6 percent in 2020, this may be easier said than done. Nonetheless, few countries are in a more comfortable position economically than Taiwan at present. As Barclays APAC (Asia-Pacific) regional economist Angela Hsieh recently noted, “2020 has been a record year for Taiwan, and we expect the star to continue shining.”

It Takes Two: Why the FS and Travel Partnership Has Never Been So Important