Top Posts
Interview with Mr. Olukayode Pitan, Chief Executive Officer and Managing...
Commodities Outlook for 2023
The Value of Cash in a Time of Crisis: How...
The US-Africa Leaders Summit: Fostering a Closer Relationship with the...
Three Key Sectors in Which to Invest in 2023
Three Key Stocks in Which to Invest in 2023
Home Finance Yield Curves: What Do They Imply re Future Growth Prospects?
Finance

Yield Curves: What Do They Imply re Future Growth Prospects? 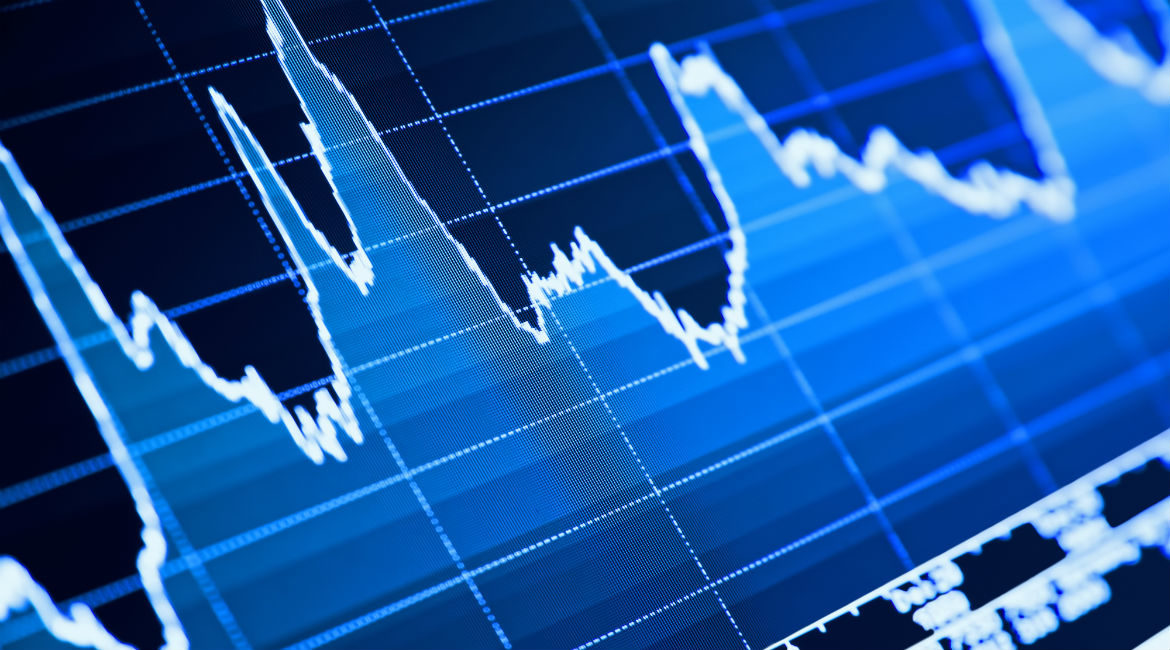 With the recent rise in US interest rates, there has been renewed interest within financial markets in yield curves as leading indicators of recessions. In the past—both in the United States and Australia—inverse yield curves have been a reasonably good indicator of forthcoming economic downturns. In theory, the rationale typically runs along the line that as markets get worried, they are prepared to take a lower yield than what would be implied from summing up the existing federal funds rate/official cash rate compounded over a longer period (typically based on a 10-year bond). In reality, what really is happening is that movements in the yield spreads are driven at the short end. That is, typically the real information in the yield curve is as a measure of excess tightening by monetary authorities (see chart below for the US). It is probably worth noting that the analysis should be based on actual rates rather than expected future rates. Thus, recent interest has been stimulated by expectations of where the federal (Fed) funds rate might be in 12 months (above 3 percent, if you believe the “Fed dots” and a US 10-year bond of around 3-3.25 percent). Both those expectations may ultimately prove incorrect.

While useful as a “recession alert”, the question I would like to explore is whether we can do more than that—possibly using an augmented yield curve as an “independent predictor of economic momentum”.

Obviously,the question of what extra variables we should use becomes critical. There is little purpose in attempting to include as many variables as required in a macro model or trying to capture policy trade terms. For the following analysis, my list of variables includes the following:

—where asset prices, currency and oil prices are in growth rates, while yield curves and real rates are in levels.

In addition, I’ve explored replacing the yield curve with a real short-term interest rate—to test the hypothesis that what we have seen is really monetary policy, not the yield curve–and an indicator of credit supply (the Loan Officer Survey of credit tightness), which was really important around the period of the “Great Recession”.

I’ve estimated the model using quarterly gross domestic product (GDP)—a real test of the model—from these formulations and let the data speak re the best correlation on the lag structures. The chart below shows the results.

A few observations around these simulations include: at the margin, real rates perform at least as well as yield curves (with long lags), oil prices and the TWI also have lengthy lags, while asset-price terms have much shorterlags. If we put reasonable estimates for asset-price terms (house prices 5 percent per annum and share markets around 4 percent) and no changes in TWI or oil prices, the equations imply long-run growth potential of around 1.8 percent. 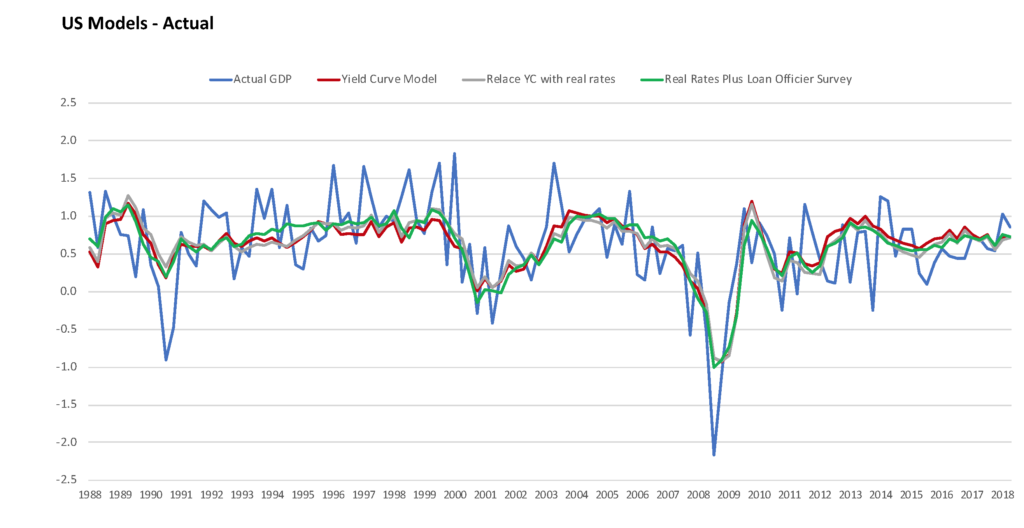 At the margin, current GDP is a touch stronger than the equation would expect but not that much.

The interesting question then becomes, What are the equations suggesting going forward? Obviously,a lot depends on the assumptions used. However, given the long lags on yield curves, currency and real interest rates (around six to eight quarter lags), the other assumptions are not as critical as might be first thought. For projecting-forward purposes, I have also assumed that house prices and equity markets essentially go sideways in 2020, and there is no credit crunch.

The key message from these projections (see chart below) is that growth will slow from here and probably move to a touch below trend in 2020—indeed our own forecasts for US GDP growth at that time is around 1.6 percent. Critically, however, there is no evidence pointing to a recession, even with interest rates moving in line with the Fed dots (i.e., Fed Funds around 3.3 to 3.5 percent). Also, not surprisingly, the lowest growth forecasts come from equations with real interest in them. Finally, it is worth noting that the usefulness of yield curves does not seem to have changed post the 2007 experience—where some have argued that the relationship between the long and short end of the curve may have changed as risk premiums rose. 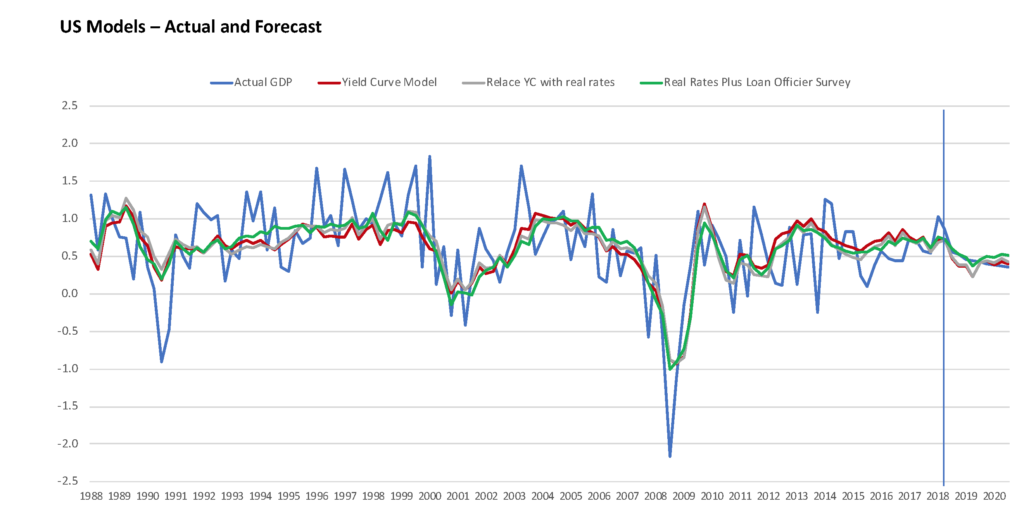 Perhaps not surprisingly, we have completed similar analysis using Australian data. Also not surprisingly, there are a few terms in the equations that differ when we turn to Australia. In particular, in our Australian version, we replaced oil prices and the currency with Australian commodity prices—with lags noticeably shorter (around 12 months). Also, there is a need to statistically remove a few special events in Australian history, such as the Brisbane floods and the introduction of a goods and services tax in 2000—which brought forward activity, especially in housing, to avoid the tax. And given the nature of droughts in Australia, it is helpful—mainly in explaining history—to add a term for farm GDP (albeit, it is typically not used in projecting forward). Finally, in a small open economy, it is useful to add in a global growth term—surprisingly, the best fit comes from including a term to capture US GDP. The surprise from an Australian perspective is that we were unable to make Chinese GDP significant.

Once again, augmented yield-curve terms do a reasonable job of tracking underlying economic momentum. The chart below shows the results of this analysis when applied to the Australian data. It is also evident that the Australian GDP data—especially in the 1980s—is more volatile than that of the United States.

There are some significant differences when comparing the US’ to Australian augmented curves. Firstly, house prices seem much more significant than in the US and equity markets less so. Also, commodity prices come through relatively quicker (around 12 months). That said, yield curves typically lag activity by around six to eight quarters and the explanatory power on a quarterly basis is similar at around R_2 (R-squared) of 0.35 to 0.40. While not shown above, replacing yield curves with real rates typically lowers the equations’ predictions. There is also some evidence that the housing term is losing its power in predicting activity—with the impact showing up in lower growth, if the equation is estimated over a shorter timeframe.

As to the forecasts, like in the US case, the equations point to a slowing in the growth momentum but still do not point to serious problems—at least in the near-term. Depending on the timeframe, these equations suggest that the underlying natural growth rate of the Australian economy has moved down from around 3 percent to nearer 2.4 percent. Finally, it is interesting that these equations suggest that while Australia may not have had two quarters of negative growth in GDP in the period 2007-2008, the slowing in growth momentum is typical of what might have happened in other periods that were classified as recessionary times.

In summary, I continue to see real value in looking to augmented yield curves as a useful guide to an economy’s underlying momentum and near-term prospects. As to their current projections—based on reasonable assumptions—neither in the US nor Australia are theresigns of significant economic troubles ahead. That said, both economies seem set to slow significantly, with the US possibly slowing below its growth potential. Of course, that does not necessarily mean that either economy is immune to unexpected shocks—such as might flow from unexpected financial disturbances and/or a much worse than expected escalation of current trade tensions.