Top Posts
Retail Central Bank Digital Currencies: Potential Benefits and Risks in...
In the Absence of Foreign Buyers, Phuket’s Luxury-Property Market Gains...
Get Ready for the End of LIBOR
Interview with Mr. B. Scott Fisher, Chief Executive Officer of...
Fighting Money Laundering on the New Front of Decentralized Finance
Pursuit of the Optimal State for Regulatory Compliance
Home History of Financial Crises Asian Financial Crisis of 1997
History of Financial Crises

In June 1997, a financial crisis emerged that swept across most of the tiger economies of Southeast Asia and major players in East Asia; it even had significant repercussions across the globe in the United States. What began in Thailand eventually impacted Malaysia, Singapore, Indonesia, the Philippines, Hong Kong and South Korea, all of which had registered impressive economic growth during the 1990s. But all these countries saw their stock markets and currencies crash in late 1997, forcing many of them to seek financial assistance from development institutions to stave off defaults.

Prior to the crisis, many Southeast Asian countries enjoyed annual growth rates of gross domestic product (GDP) in the 6-to-9-percent range, much of which was driven by an export boom that was made possible by an increasingly free global trade environment, cheap but productive pools of labour in their domestic economies and, in some cases, rapidly growing foreign direct investment (FDI) by major multinational companies and investors, which further helped boost output in these export-oriented economies.

Indeed, the 1990-96 period saw the value of exports from Malaysia grow by 18 percent per year, Thailand by 16 percent, Singapore by 15 percent, Hong Kong by 14 percent, and South Korea and Indonesia by 12 percent. The nature of their exports also changed dramatically during this time, shifting away from basic materials such as textiles to more innovative products such as consumer electronics, automobiles and semi-conductors. The success of the export boom became known as the Asian economic miracle and fuelled a major global influx of capital to the region. It also triggered exceptional wealth creation that led to an unprecedented boom for real estate and infrastructure. Land and house prices in major metropolitan areas such as Bangkok and Hong Kong began to soar, propelling a major construction boom throughout the region.

Such booming conditions also induced commercial banks to expand their lending activities, with short-term lending to local firms particularly buoyant. Such lending was in high demand throughout much of the first half of the 1990s, thanks to the higher yields on offer from banks in the region compared to other global markets. Rates in the United States and Japan, for instance, were much lower during this time, as both countries were engaged in monetary expansions to encourage growth following major recessions in their respective economies. As such, Southeast Asia’s higher interest rates offered not only an attractive location for investment but was also enticing for short-term vehicles seeking to profit from positive interest-rate differentials compared to other parts of the world.

However, fundamental weaknesses underpinned the success of the tiger economies—namely, that their currencies were pegged to the US dollar to attract FDI along with raising their interest rates. Exchange rates were also fixed at levels that favoured export sectors. As the US began raising its own interest rates and attracting global funds to its shores from around 1995 onwards, the dollar’s value began to rise. As such, the Asian currencies tied to the greenback also began to appreciate, which hurt their export industries.

Investors began to withdraw from the region as losses in export industries hit asset prices, which themselves were leveraged by substantial amounts of credit. As capital continued to drain from these Southeast Asian economies, the downward pressure on their currencies intensified to such a degree that the Thai government exhausted its reserves, having spent billions of dollars attempting to support its exchange-rate peg. After the forced removal of the peg, therefore, the Thai baht went from a fixed to a floating exchange rate and immediately collapsed by almost 20 percent.

The baht’s crash marked the commencement of a deep financial crisis that hit much of Southeast Asia and East Asia during the ensuing months. Thailand’s problems triggered a retreat by foreign investors and creditors throughout the region, including Japanese banks, which had provided a significant proportion of the credit to these Asian economies. Thailand’s currency, stock market and property market weakened further. Malaysia also intervened that month to defend its ringgit, shortly before the Philippine peso and Indonesian rupiah underwent their own major devaluations. 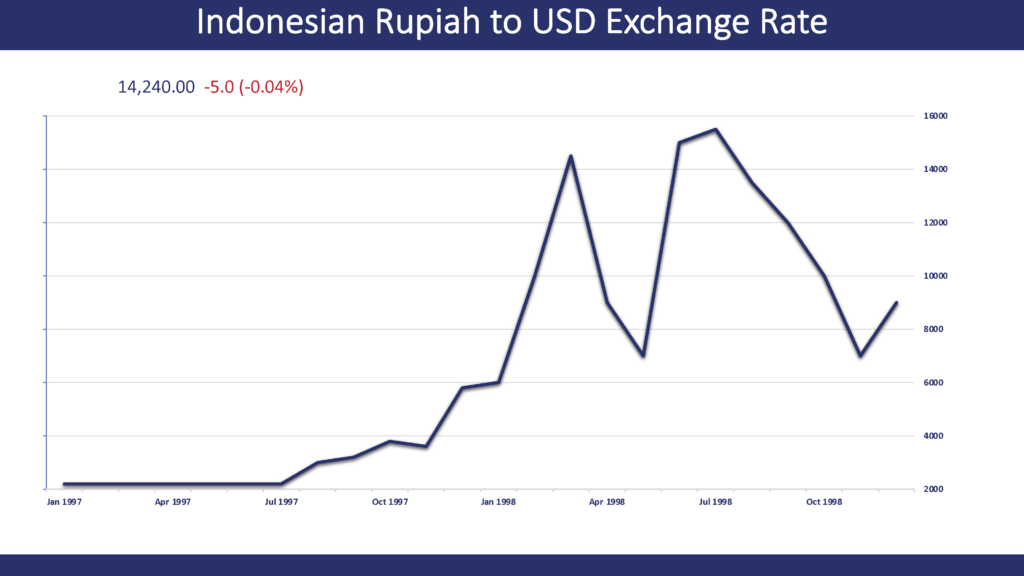 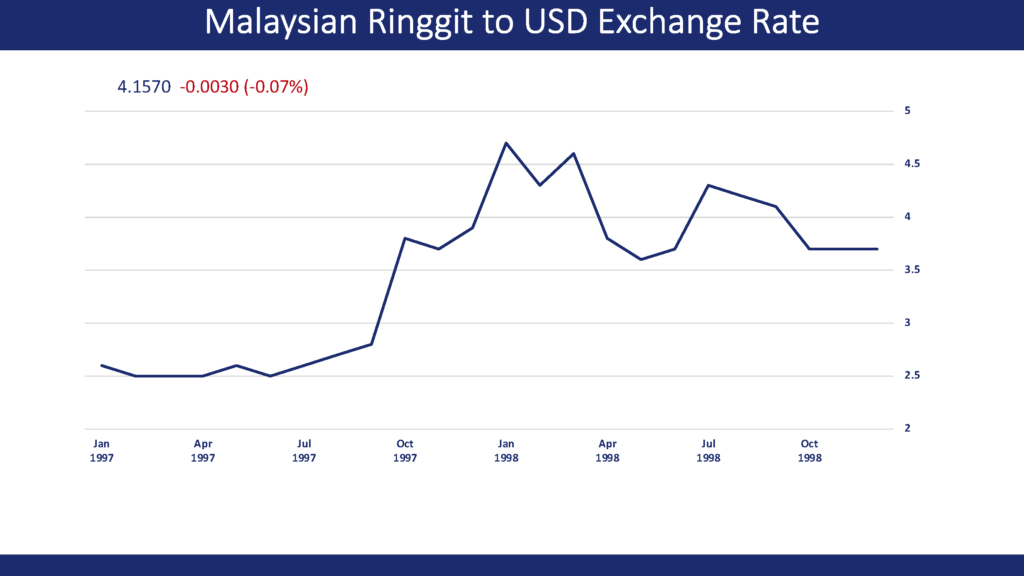 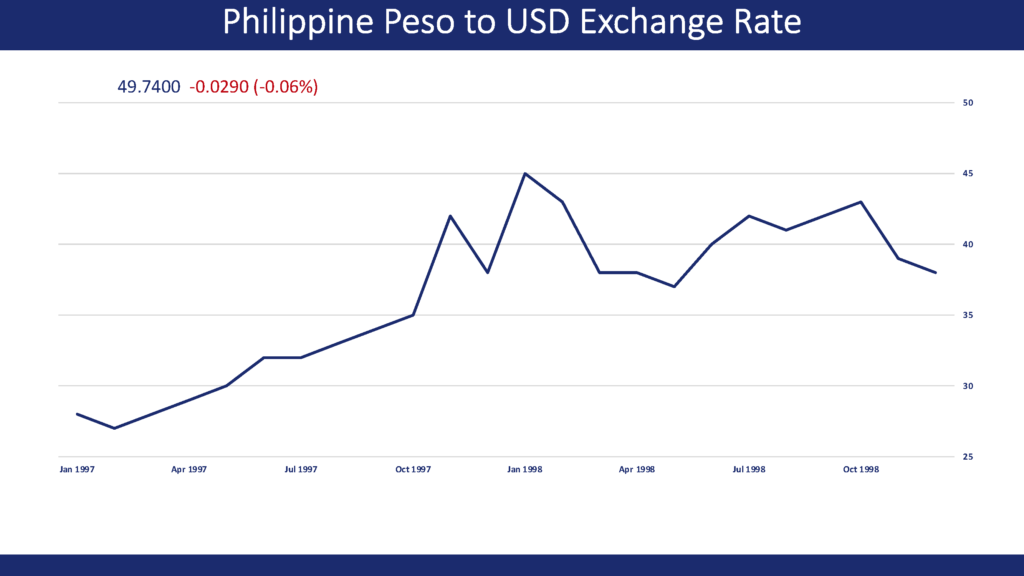 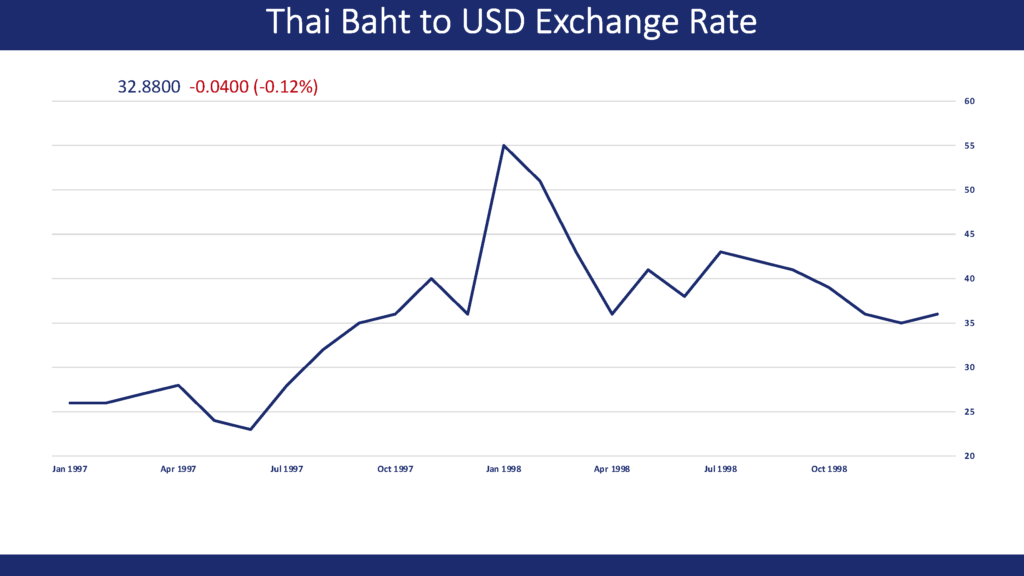 By July 1997, the Thai government was requesting “technical assistance” from the International Monetary Fund (IMF); in response, the development institution provided a $17-billion loan (along with other sovereign lenders)—in exchange for Thailand implementing tough economic measures, including tax hikes and forced closures of dozens of failing domestic financial companies. The IMF also injected more than a billion dollars into the Philippines as an “emergency funding mechanism” to help alleviate the pressure on the peso. 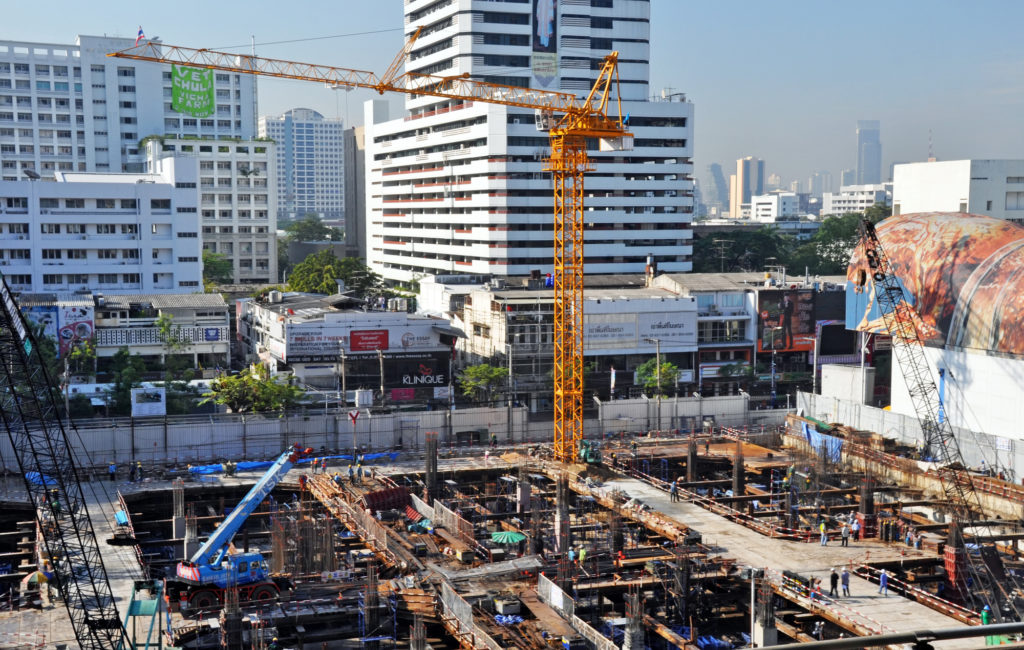 The Asian economic miracle led to exceptional wealth creation that in turn created an unprecedented boom in real estate and infrastructure in places such as Bangkok.

The next few months saw currencies across the region weaken further, while contagion effects meant that countries outside the region also began to feel the effects of the crisis, including Hong Kong and South Korea. By October, almost $30 billion was wiped off Hong Kong’s stock market after the East Asian city-state raised bank lending rates to 300 percent to protect its dollar against speculative attacks against its peg to the US dollar. Even the US was forced to suspend market trading as the crisis caused the benchmark Dow Jones Industrial Average (DJIA) to plunge by 554 points on October 27—its biggest-ever single-day point loss until that time.

And although South Korea had been maintaining relative stability until then, the Korean won dropped to a record low the day after the US market suspension before continuing to decline further. Korea’s stock market then experienced its biggest single-day drop on November 8. Ten days later, Korea’s central bank abandoned all efforts to prop up the won, allowing it to plummet below 1,000 against the dollar, before asking the IMF for support shortly afterward. The IMF responded with a $57-billion package—its largest ever—in December as South Korea teetered on the brink of default.

But of all the countries affected by the Asian financial crisis, it was arguably Indonesia that was most severely impacted, both in terms of the financial and political costs the country eventually bore. Between August and October, Southeast Asia’s largest economy saw its currency drop by 30 percent, despite the central bank’s efforts to prop it up. As such, a request was made to the IMF and World Bank for assistance, to which the IMF agreed to a loan package on the proviso that Jakarta adopted strict reforms and closed down 16 insolvent banks. But the rupiah plummeted to an all-time low by mid-January nonetheless, after President Suharto unveiled a state budget that did not comply with the IMF’s requirements. Thanks to its lending exposure to Indonesia, moreover, Asia’s largest private investment bank, Hong Kong’s Peregrine Investments Holdings, was forced into liquidation.

Following major demonstrations and panic buying across the country in fear of further currency declines, Suharto signed a new loan deal with the IMF on January 15, which involved eliminating the country’s monopolies and state subsidies to cut expenditures and foreign debts. But the president’s refusal to implement certain requirements led the IMF to hold back some of the aid. Following further food riots across the country, a third agreement was reached in April, with the IMF allowing the government to provide food and fuel subsidies in exchange for Suharto’s concession to close more insolvent banks. But the civilian chaos, as well as the food- and energy-price hikes, were ultimately pivotal in forcing Suharto from power after 32 years in charge.

As the dust settled, it became clear how badly damaged the tiger economies were by the financial crisis. The nominal GDP per capita between 1996 and 1997 had dropped by 43.2 percent in Indonesia, 21.2 percent in Thailand, 19 percent in Malaysia, 18.5 percent in South Korea and 12.5 percent in the Philippines. And stock markets had lost up to 70 percent of their value by early 1998. The IMF pointed to a handful of key domestic and external factors that contributed to the Asian financial crisis, including:

In total, the IMF and other creditors (including the World Bank, the Asian Development Bank [ADB], and governments in Asia, Europe and the US) generated bailout funds worth $20 billion for Thailand, $40 billion for Indonesia and $59 billion for South Korea. According to the IMF itself, the packages were conditional on the recipient countries making necessary structural adjustments, including lowering their government spending, allowing insolvent financial institutions to fail, restructuring and recapitalising weak financial institutions that were still viable, improving corporate governance and accountability, and raising interest rates aggressively.

Such measures were intended to help support currency values by helping troubled countries to rebuild their currency reserves, boost confidence in the countries’ solvency and provide them with the necessary time to implement new policies to stabilise their economies. And to their credit, the tiger economies did implement the reforms and bounced back quickly. “The region now is much better prepared to face financial turbulence,” acknowledged Mitsuhiro Furusawa, the IMF’s deputy managing director, on the 20th anniversary of the crisis in the IMF blog “What We Have Seen and Learned 20 Years After the Asian Financial Crisis”. “In fact, a major global financial crisis already occurred, and the region was well placed to ride out the downturn. The 2008 global financial crisis hit hard in the US and Europe, but Asia experienced only a mild slowdown. Growth remained positive and quickly accelerated again after a small dip.”

Indonesia was arguably the most severely impacted by the financial crisis. This video shows historical news coverage of the days leading up to President Suharto’s resignation which occurred within a year of the Asian financial crisis starting.