Top Posts
How Gamification is Catapulting Digital Banking to the Next Level
Challenges Remain, But There Are Opportunities to Be Had in...
Interview with Mr. Olukayode Pitan, Chief Executive Officer and Managing...
Commodities Outlook for 2023
The Value of Cash in a Time of Crisis: How...
The US-Africa Leaders Summit: Fostering a Closer Relationship with the...
Home History of Financial Crises The Stock Market Crash of 1929
History of Financial Crises 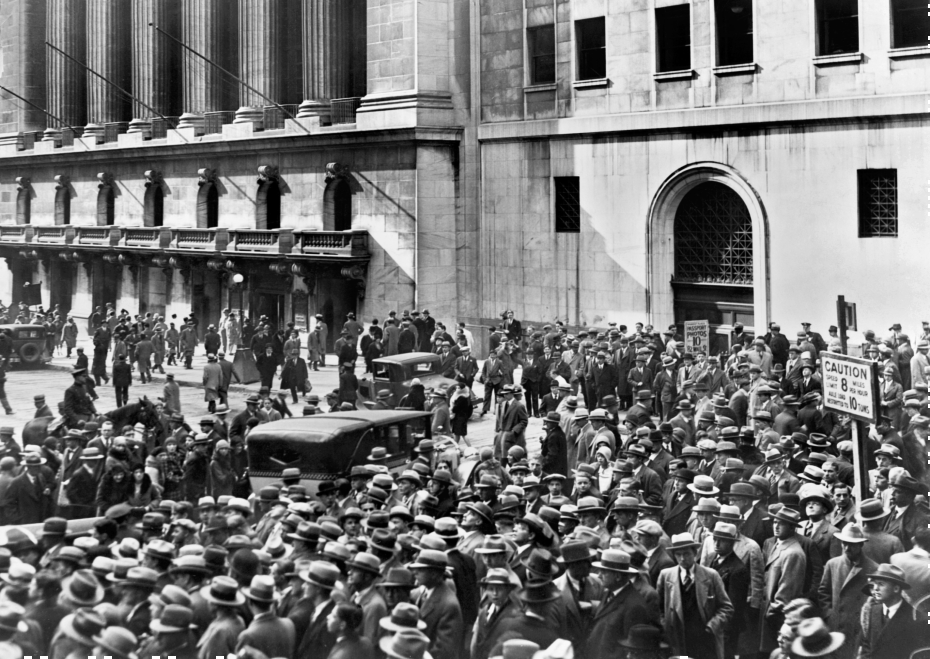 It remains perhaps the most eventful few days in financial-market history. The stock market crash of 1929 began on October 24, and by the 29th, the Dow Jones Industrial Average (DJIA) had lost just shy of 25 percent of its value. The collapse destroyed investor confidence in the United States and eventually led to the Great Depression, perhaps the most damaging economic downturn of all time.

The crash had its roots in the decade of wealth and excess that preceded it. Known as the Roaring Twenties, the US’ rapid expansion of industry following World War I raised the economic aspirations of millions, as people from rural areas all across the country flocked to the cities in search of better lives.

Record iron and steel production, healthy building construction and robust automobile manufacturing were all notably expansive markets during this time. Households also prospered greatly during the 1920s as the consumer economy expanded significantly, and technological advancements such as telephones and automobiles became commonplace throughout urbanised parts of the country. 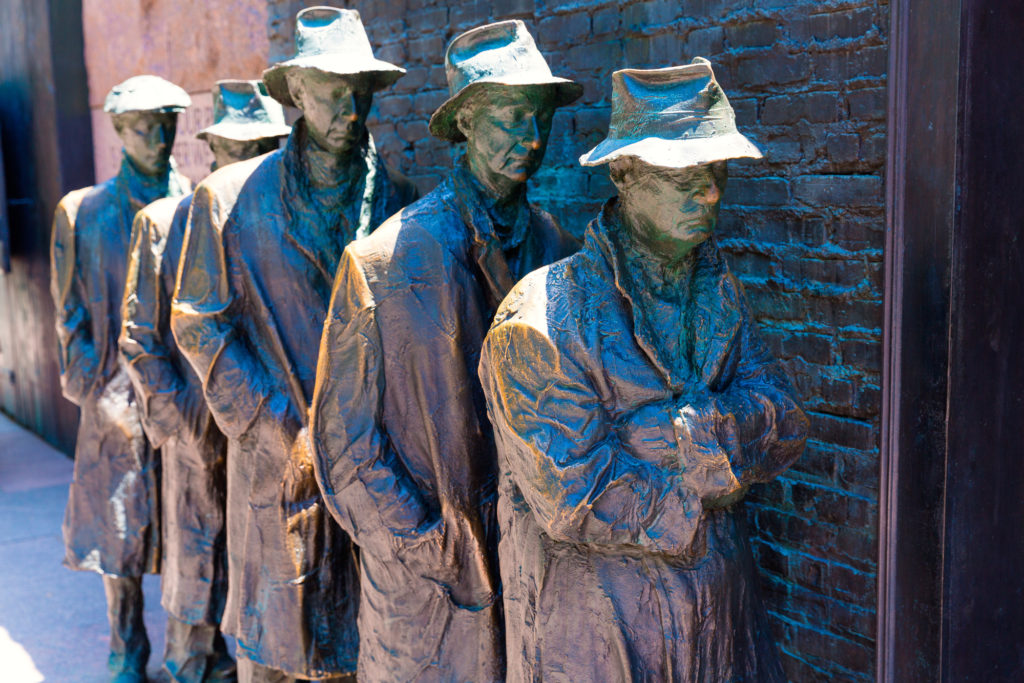 The crash of 1929 took place under the presidency of Herbert Clark Hoover (1929–1933) and led to the Great Depression. Franklin D. Roosevelt became president in 1933 and enacted a series of programs under the New Deal.

Americans were also keen to cash in on this time of rapid industrial growth, meaning that hundreds of thousands of investors speculated heavily in the stock market. The growing number of ordinary people who gained access to stock and bond investing prospered greatly as the markets continued to rise. In turn, a new industry of investment companies, brokerages and margin accounts thrived as people flocked to the stock market to buy up equities, often with borrowed money.

Indeed, in many instances, investors borrowed up to 90 percent of the funds they poured into stocks, with the purchased equity itself often serving as collateral for their loans. Liberty bonds—those debt instruments sold to raise funds to support the Allies’ cause in World War I—were being sold by the bucketsful, and people even mortgaged their homes, all to pour more cash into the stock market. Billions of dollars were switched from banks into brokers’ loans to support margin-trading accounts.

By the summer of 1929, approximately 300 million shares of stock had been purchased on margin. “At the turn of the 20th century stock market speculation was restricted to professionals, but the 1920s saw millions of ‘ordinary Americans’ investing in the New York Stock Exchange,” the Financial Times noted in 2008. “By August 1929, brokers had lent small investors more than two-thirds of the face value of the stocks they were buying on margin—more than $8.5 billion was out on loan.”

It was no surprise, then, that share prices rose to record highs during the 1920s—the Dow Jones Industrial Average increased from an index value of just 63 in August 1921 to 381 by September 1929. The index also gained 20 percent in the four months through September 1929 alone. During its September peak, economist Irving Fisher rather infamously declared that stock prices had reached “what looks like a permanently high plateau”. But, of course, no sooner had he made such an assertion than things took a dramatic turn for the worse.

By early September, the influential financial expert Roger Babson predicted that “a crash is coming, and it may be terrific”. As such, the ensuing weeks in which markets declined became known as the Babson Break, when most investors perceived the market to simply be undergoing a long-overdue correction that would eventually provide them with an opportunity to make a suitable entry.

But this proved not to be the case. By September 20, the London Stock Exchange (LSE) had crashed after noted British investor Clarence Hatry and several of his colleagues were jailed for fraud and forgery. The crash sent shockwaves across the pond and severely dented American investor confidence, particularly in US companies operating in overseas markets.

As such, markets were characterised by marked volatility over the following four weeks but began precipitously declining from October 18 onwards, as interest in buying stocks gave way to a much bigger rush to sell. The crash then took hold on Thursday, October 24—a date that came to be known as Black Thursday—when the stock market began the day by plummeting by 11 percent. A record total of 12,894,650 shares were traded on this day as widespread panic set in.

Somewhat surprisingly, the following day saw markets rebound modestly, as some of Wall Street’s leading institutions, such as J.P. Morgan, purchased massive quantities of stock in an attempt to quell the panic and achieve some stability. The Dow gained 0.6 percent to 301.22.

But the collapse continued with venom on Monday, October 28, with the Dow crashing by almost 13.5 percent to 260.64, before falling a further 11.7 percent to 230.07 the next day, when some 16 million shares were traded on the New York Stock Exchange (NYSE). Indeed, trading was so voluminous that stock tickers ran hours behind as the machinery could not cope with the activity. Black Monday and Black Tuesday still rank among the four worst days in the Dow’s history. Billions of dollars were lost, and thousands of investors were completely wiped out. 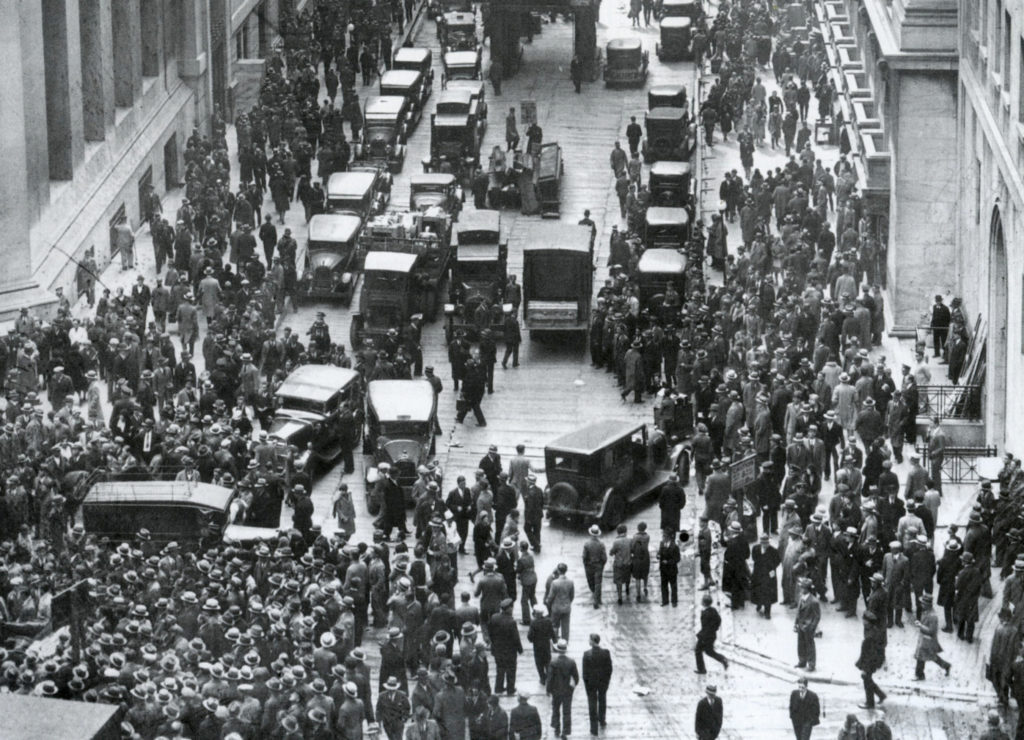 Investors and brokers mill around outside the New York Stock Exchange on 29 October 1929.

Why was the collapse so pronounced? Several factors are cited as being responsible. The extensive speculation, for one, meant that those who purchased equity on margin both lost the value of their investments and were in debt to those institutions that had loaned them funds to make the stock purchases in the first place.

Overproduction across a number of key industries also contributed to the downturn. Steel, iron and durable goods experienced shortfalls in demand compared to their supply levels, meaning that firms were ultimately forced to offload their output at a loss, thus dragging their share prices downward. The ongoing agricultural recession only further exacerbated the sell-off in this regard.

The Federal Reserve System (the Fed), meanwhile, had its own role to play in the market crash when it tightened credit conditions by raising the discount rate from 5 percent to 6 percent in August 1929. And a number of other perhaps more minor factors also contributed, such as the abundance of holding companies and investment trusts that only added to the debt being amassed, the persistence of bank loans that could not be liquidated and the economic recession that had already set in by the time the crash occurred. But it was arguably the news in October that public-utility holding companies would be regulated that was the most immediate trigger for the broad market sell-off.

By mid-November, the Dow had shed nearly half its value, and the slide continued for several years, hitting a 20th-century low in mid-1932 of 41.22, which was 89 percent below its peak. Indeed, the Dow failed to return to its pre-crash highs until November 1954.

“The crash of 1929 curtailed economic activity, its impact faded within a few months, and by the fall of 1930 economic recovery appeared imminent,” according to Federal Reserve historians. “Then, problems in another portion of the financial system turned what may have been a short, sharp recession into our nation’s longest, deepest depression.”

Indeed, the Great Depression lasted approximately 10 years and had a severe impact across much of the world.

A great PBS documentary which looks at the causes of the crash and also interviews people who lived through the times.