Top Posts
Digital Transformation For Financial Systems In A Changing World
How Gamification is Catapulting Digital Banking to the Next Level
Challenges Remain, But There Are Opportunities to Be Had in...
Interview with Mr. Olukayode Pitan, Chief Executive Officer and Managing...
Commodities Outlook for 2023
The Value of Cash in a Time of Crisis: How...
Home History of Financial Crises The WorldCom Scandal (2002)
History of Financial Crises 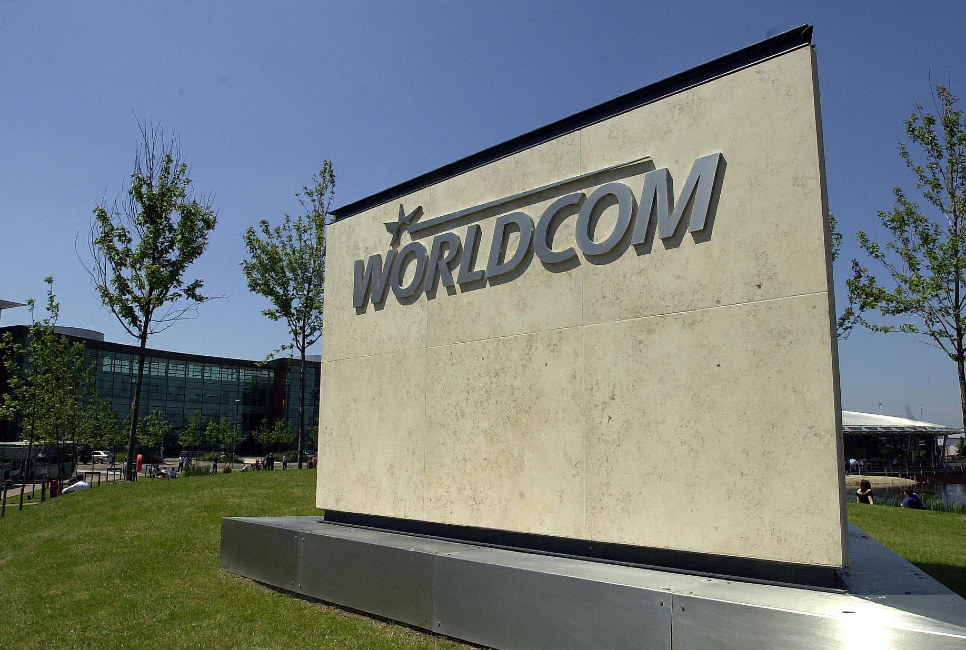 Coming hot on the heels of accounting scandals involving Enron and Tyco, both of which sent financial markets into tailspins, the fraud committed by WorldCom, one of the world’s biggest telecommunications companies, ended up dwarfing even those infamous crimes in terms of sheer numbers.

By June 2002, the United States’ second-largest long-distance telecommunications company confirmed it had overstated its earnings, mainly by classifying as capital expenditures those payments it was making for using the communications networks of other companies. WorldCom had “cooked the books” repeatedly—including its income statement, balance sheet, Form 10-K filing and annual report—in its attempts to inflate its profit-and-loss position by a whopping $3.8 billion, with senior management well aware of the skulduggery being committed. It became the biggest accounting scandal on record in the US and was one of the biggest ever bankruptcies ever filed. And as a result of the company’s actions, Chief Executive Officer Bernard Ebbers was sentenced to 25 years in prison, while the company’s chief financial officer, Scott Sullivan, received five years behind bars. But things had been so markedly different just a few years before….

WorldCom had experienced stellar growth throughout much of the 1990s, mainly by achieving a number of highly profitable strategic acquisitions of other telecommunications companies, including MCI Communications—a company with 2.5 times larger revenue than WorldCom—for $37 billion in 1998. It then moved aggressively into internet communications, and by 2001, it was handling half of all internet and e-mail traffic in the US. For this acquisition strategy to be successful, much depended on the company’s stock price staying on a consistently upward trajectory. Until early 1999, the strategy seemed to be working for the company—especially for Ebbers, who was worth an estimated $1.4 billion and had been named the 174th richest American on the Forbes 400.

But that year saw WorldCom’s revenue growth begin to slow, which in turn dragged down its stock price. This could partly be attributed to the vast oversupply of US telecommunications networks at the time, which overshot demand in the face of excessively bullish expectations surrounding the growth of the internet. And to compound matters, its proposed merger with Sprint Corporation was shut down that year based on antitrust concerns.

As such, there was much concern from Ebbers and senior management that WorldCom’s earnings would not meet the expectations set by Wall Street analysts. In response, WorldCom began tampering with its financial statements to conceal its lacklustre performance and give the impression that it had met those analysts’ projections. It reduced the amount it held in reserve by $2.8 billion and reclassified those funds as revenues; it then did the same with operating expenses that represented the amount WorldCom paid to other telecommunications companies to access their networks, “hiding” those expenses as long-term capital investments. The reclassifications gave WorldCom an additional $3.85 billion—the changes making it appear as though the company had generated $1.38 billion in profits, along with heavily inflated assets.

Ebbers continued to manage Wall Street expectations of double-digit growth by reporting the manipulated numbers and presenting the false impression of a thriving company to the market as well as internally to both the WorldCom employees and board of directors. But he was receiving information internally that was wholly inconsistent with such an impression, particularly from CFO Sullivan and WorldCom’s controller, David Myers. Indeed, much of the fraudulent activity was conducted under the direction of Sullivan. As the company continued failing to meet financial targets announced by Ebbers, Sullivan continued making false accounting entries to give the appearance that those targets were being achieved. And he was ably assisted by Myers, who similarly directed the making of unsupported entries.

Evidence also made clear that Ebbers was aware of the manipulations being undertaken by Sullivan and Myers, and Sullivan later confirmed that Ebbers knew of the capitalisation of line costs. And yet, the chief executive continued to make unrealistic projections to the market and failed to disclose any of the internal dishonesty taking place. Some believe this was the case because Ebbers was more concerned about protecting his vast personal wealth and his huge salary, which made him one of the country’s highest-paid executives.

By February 2002, WorldCom’s results for the fourth quarter of 2001 were well below Wall Street expectations, and the company reduced its guidance for 2002. But Ebbers still provided a very upbeat outlook for the company, saying, “We have solid investment grade debt ratings; and we are free cash flow positive” and “Let me be clear, we stand by our accounting”. Nevertheless, Ebbers resigned in April after being told he would be dismissed by the board.

Ratings agencies subsequently downgraded WorldCom, with Moody’s downgrade in May putting WorldCom debt at junk status. WorldCom’s Internal Audit Committee also undertook a review of the company’s capital expenditures, despite opposition from Sullivan and Myers. More personnel began questioning Sullivan and Myers about the dubious accounting entries before Myers finally admitted to internal auditors that he could not support the capitalization of line costs. Once the Audit Committee was made aware of the irregularities, they duly terminated Sullivan and received Myers’ resignation.

On June 25, 2002, WorldCom disclosed to the U.S. Securities and Exchange Commission (SEC) and the public that for 2001 and the first quarter of 2002, it had determined that certain transfers amounting to $3.852 billion from “line cost” expenses to asset accounts were not made in accordance with generally accepted accounting principles (GAAP). A few weeks later, the company filed for bankruptcy, shortly before revealing an additional $3.831 billion in improperly reported earnings for 1999, 2000, 2001 and the first quarter of 2002.

The next day, the SEC filed a lawsuit against WorldCom shortly before the board of directors accepted a full, independent investigation of the accounting practices that occurred. Hearings were also held by the House Committee on Financial Services and the Senate Committee on Commerce, Science, and Transportation. In total, WorldCom made more than $9 billion in erroneous accounting entries to achieve the impression it was making profits. It was orchestrated by a few key members of senior management based in the company headquarters in Mississippi and executed by employees in the financial and accounting departments across various locations. 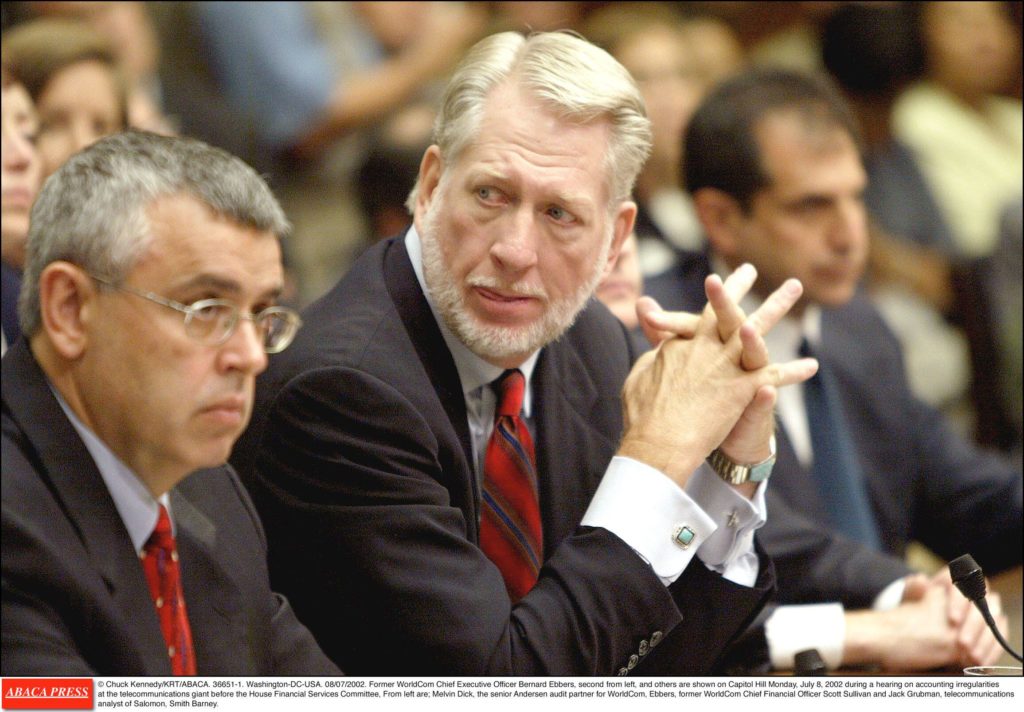 “The fraud was implemented by and under the direction of WorldCom’s Chief Financial Officer, Scott Sullivan. As business operations fell further and further short of financial targets announced by Ebbers, Sullivan directed the making of accounting entries that had no basis in generally accepted accounting principles to create the false appearance that WorldCom had achieved those targets,” according to the SEC’s report of the investigation. “In doing so he was assisted by WorldCom’s Controller, David Myers, who in turn directed the making of entries he knew were not supported.”

The SEC concluded that the scandal was very much the result of the way CEO Ebbers ran WorldCom. He was at the heart of the company’s culture and exerted much of the pressure that led to the fraud lasting as long as it did. A lack of controls within the financial system at the time also played a major contributory role in the fraud. As the SEC reported, the improper accounting entries were easily accomplished because “it was apparently considered acceptable for the General Accounting group to make entries of hundreds of millions of dollars with little or no documentation beyond a verbal or an e-mail directive from senior personnel”.

The SEC also highlighted the part played by Arthur Andersen’s grossly inadequate auditing, and while there was insufficient evidence that WorldCom’s auditing firm during the fraud period was aware of the capitalization of line costs or that WorldCom’s revenues were being improperly reported, there were clear flaws in Andersen’s audit approach, which limited the likelihood it would detect the accounting irregularities. “Andersen appears to have missed several opportunities that might have led to the discovery of management’s misuse of accruals, the capitalization of line costs, and the improper recognition of revenue items,” the SEC report stated. “For their part, certain WorldCom personnel maintained inappropriately tight control over information that Andersen needed, altered documents with the apparent purpose of concealing from Andersen items that might have raised questions, and were not forthcoming in other respects. Andersen, knowing in some instances that it was receiving less than full cooperation on critical aspects of its work, failed to bring this to the attention of WorldCom’s Audit Committee.”

The regulator also cited “a lack of courage” by others in WorldCom’s financial and accounting departments to blow the whistle. “Employees in the financial and accounting groups believed that forcefully objecting to conduct that they knew was being directed by Sullivan would cost them their jobs; few of them were prepared to take that risk.” That said, the SEC did acknowledge that some did make complaints to their supervisors as well as refused to take certain actions they considered inappropriate. Nonetheless, no one took the necessary action to halt or expose the ongoing practices until the spring of 2002.

An interesting documentary on WorldCom.