Top Posts
Interview with Mr. Olukayode Pitan, Chief Executive Officer and Managing...
Commodities Outlook for 2023
The Value of Cash in a Time of Crisis: How...
The US-Africa Leaders Summit: Fostering a Closer Relationship with the...
Three Key Sectors in Which to Invest in 2023
Three Key Stocks in Which to Invest in 2023
Home Life Arts & Travel 2020 Toyota Supra A90 and 2020 Shelby GT500: Will Two Resurrected Icons Hold up to Scrutiny?
Life Arts & Travel 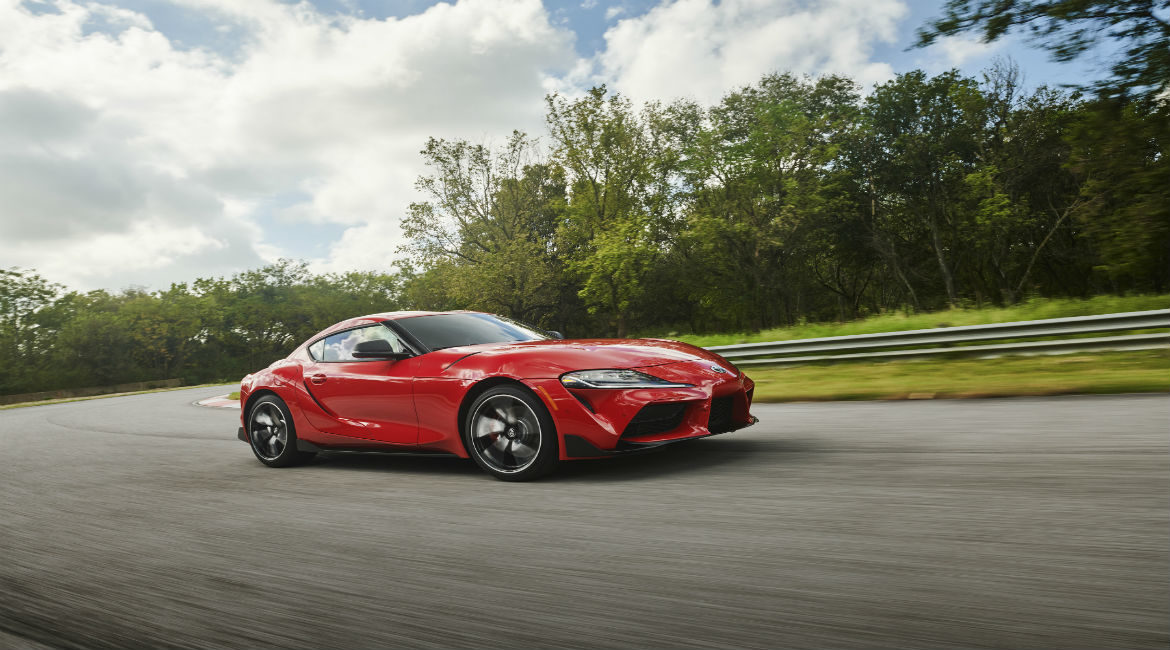 The 2019 Detroit Auto Show in January may have lacked in the sheer number of new debuts, with only 22 new cars actually showing their faces there for the first time. However, among them, two were especially interesting—the 2020 Toyota Supra A90 and the 2020 Ford Mustang Shelby GT500. Obviously, two completely different beasts, but both designed to entice our deepest automotive cravings. This is a story about the new Toyota Supra A90 and Shelby GT500—probably the last Mohicans of their own kin, as I expect that their successors will notbe only-internal-combustion-engine-powered creatures. The hybrids will come.

This makes the 2020 Toyota Supra A90 and the 2020 Shelby GT500 really important, even iconic in some car culture sense.

The 2020 Toyota Supra A90 and 2020 Shelby GT500 entice the same cravings despite completely different philosophies. 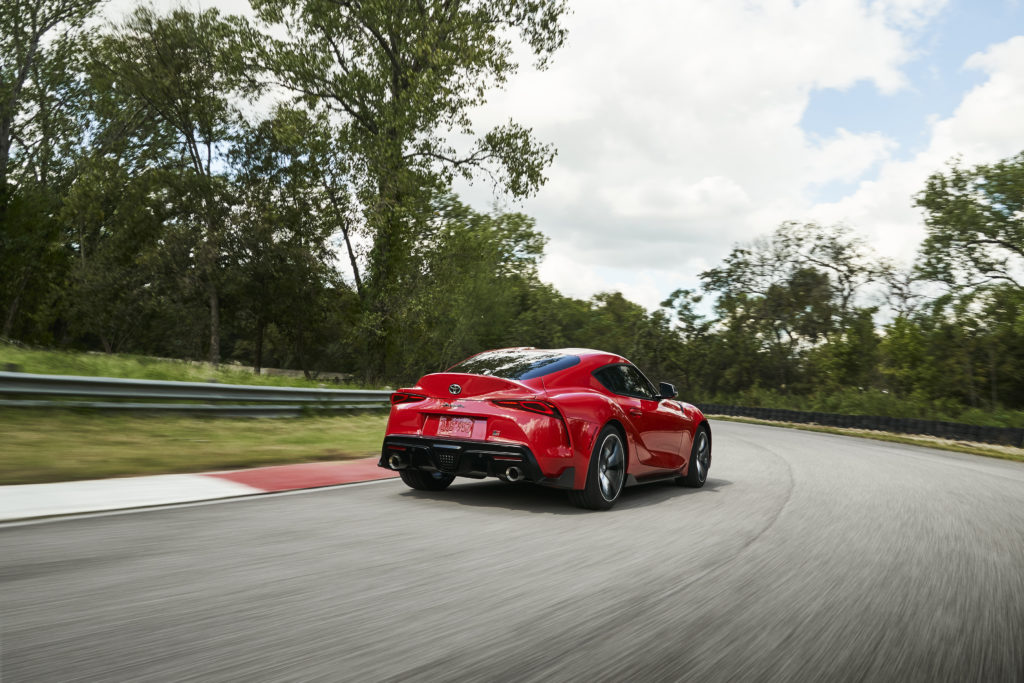 Generally, these two sports cars don’t have much in common—aside from the basic two-door layout and the front-engine, rear-wheel-drive setup. The Supra and the GT500 represent two different ideologies—one clearly formulated to dominate the muscle-car sovereignty, with the other one aiming to resurrect the JDM (Japanese domestic market) vernacular everyone has demanded since the nineties.

While the GT500 has largely remained faithful to the formula envisioned in 2006 (and 1967), Toyota took a slightly different path with the Supra development. It is safe to say that the Japanese did not even develop the car as such. All of the development, aside from the design, has been outsourced to BMW. As you probably already know, the new Supra is very much like the new BMW Z4—only with a different exterior look. 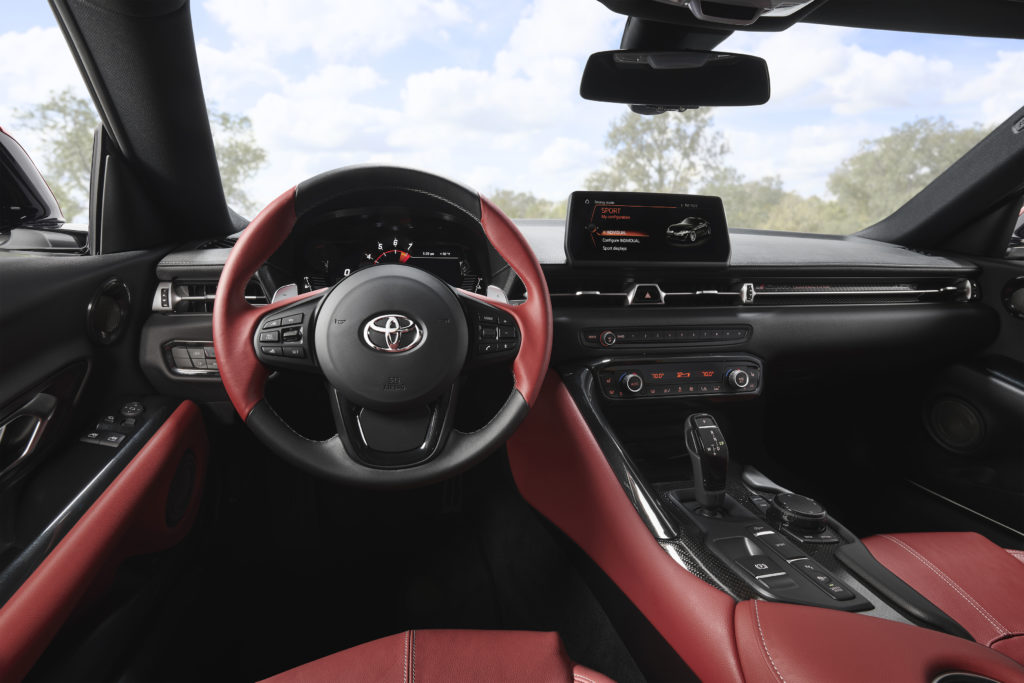 Toyota designers had to make some really concerning decisions to make all of this work, though. The new car is considerably shorter compared to the previous Supra A80. That said, it has become the shortest Supra of all time. (It is 11 inches shorter compared to the 1981 Toyota Supra A60, for goodness sake.) On the other side, every Supra since the A60 has become shorter and shorter.

However, size isn’t the issue with the GT500. This pony car dwells on the territory where size is appreciated more than anything. For that matter alone, some design decisions made in favour of the GT500 do seem like sound ones. The latest Shelby GT500 actually has the biggest vent ever fitted to a Ford car (that one on the bonnet); it has the biggest snake plaque up front, the biggest brakes and the biggest front grille. Did I mention the biggest rear wing? Well, that one has been directly taken off the racing Mustang GT4. It is actually part of the special Track Pack. With it, the rear down force of the Shelby GT500 is at a higher level than that of the new Ford GT supercar. Let that sink in. 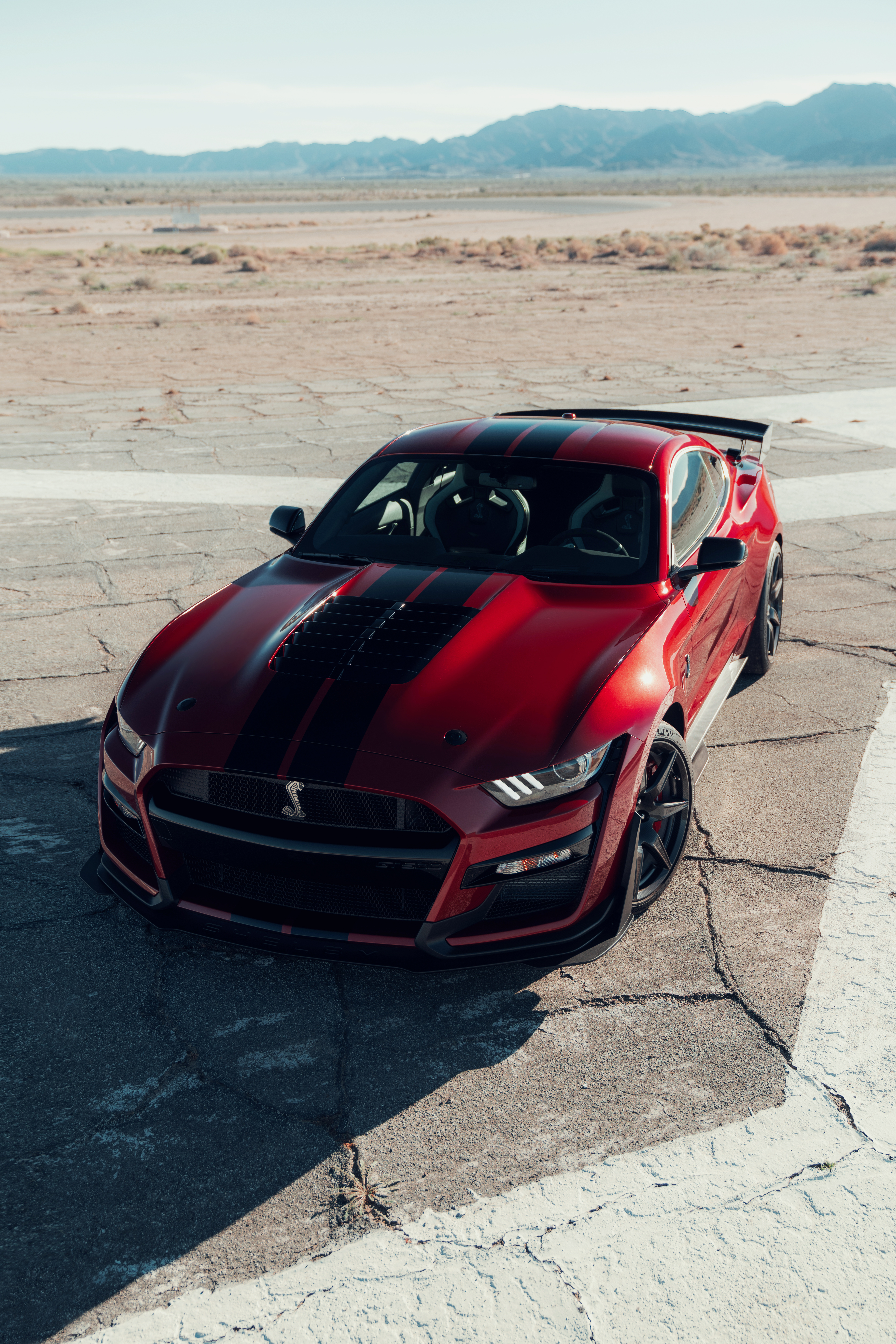 Don’t think for a second that the Toyota Supra A90 lacks its share of astonishing features. It does not, as it’s considerably quicker and faster than any Supra to date. This isn’t an easy task to accomplish. In order to do it, the new Toyota Supra was built on a stiffer architecture than that of the Lexus LFA. Obviously, I am making direct comparisons of the supercars, just to show you that the Supra A90 and the new GT500 are serious sports machines. Not afraid of tracks. Not a bit. With the LFA levels of stiffness achieved without the use of carbon fibre (to keep the cost down), almost completely flat floor and Gazoo-Racing-tuned suspension, the Supra A90 was readied to put to work all of that 335 horsepower and 369 pound-feet of torque. The propellant comes from the likes of the turbocharged, inline-six—linked with a uniquely tuned ZF eight-speed transmission with a launch-control system.

Interestingly enough, only moments after Toyota published the official performance numbers for the Supra A90 3.0, BMW corrected its performance data for the BMW Z4 M40i (basically the same car as the Supra). It can do 60 miles per hour in 3.9 seconds. True, it does claim 382 horsepower from the same source. 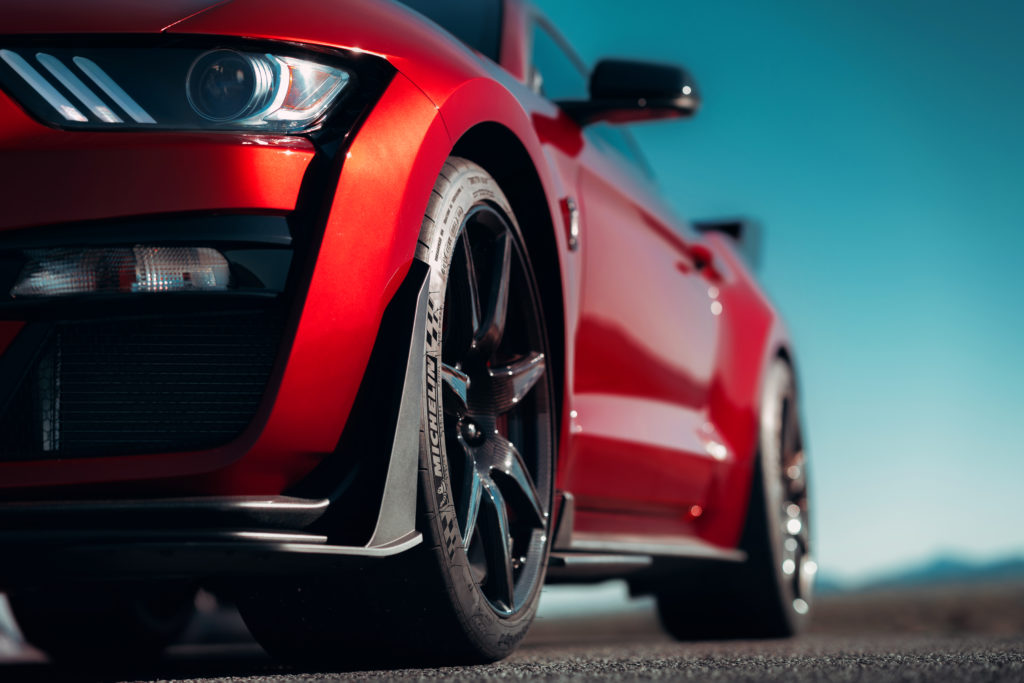 Nevertheless, the new Supra is obviously in its own celebrity class. This was further proved with the record-breaking auction for the first ever Supra A90 on American soil—it sold for a freaking $2.1 million.

On the other hand, the first 2020 Shelby GT500 achieved $1.1 million at an auction. This only goes to show which car created more buzz. And this is strange as the new 2020 Shelby GT500 is in a completely different league compared with the Supra A90. It is a supercar beating a muscle car. And it seems, not only on the straights. With the aforementioned Track Pack installed, the 2020 Ford GT500 becomes a track monster. The features include: 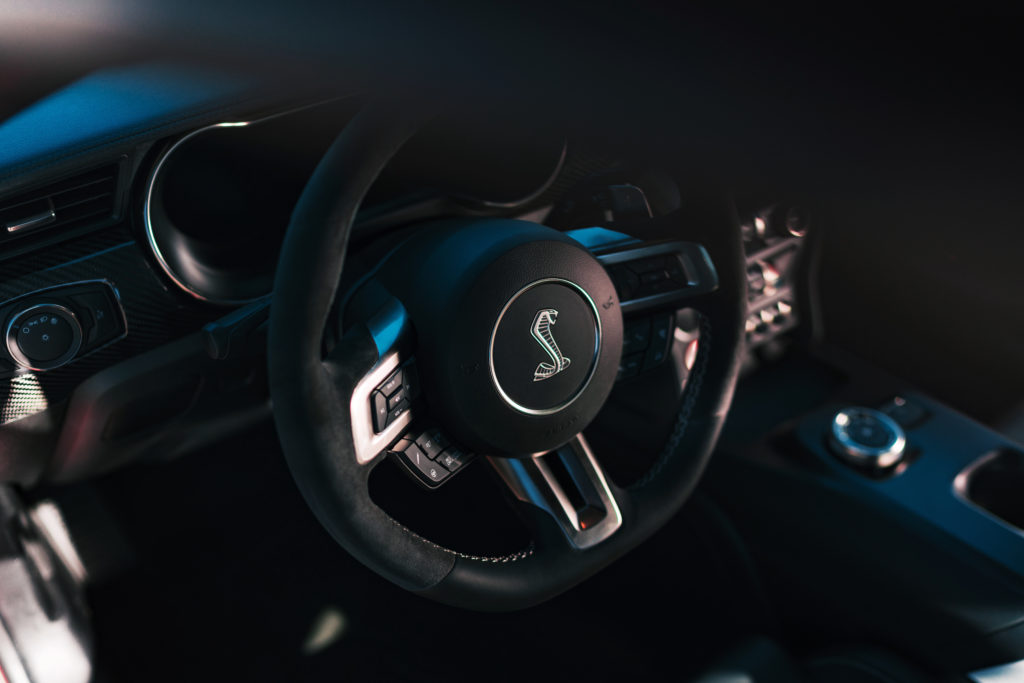 Now, all of this would probably be beside the point if the Shelby GT500 did not have a nuclear warhead under the bonnet. The supercharged V8 inside the Shelby GT500 is its most astounding feature.

“We knew we wanted the 5.2-liter block out of the GT350,” Carl Widmann, Ford Performance’s chief engineer, explained. “The trick was we had to really modify it to take all the boost that comes off that 2.6-liter Eaton supercharger.”

They’ve done it. Not only that, but the Voodoo GT350 engine gained basically the same supercharger as the Corvette ZR1 (I am not joking) and the cross-plane crank (instead of a flat-plane one). The result is 700+ tire-shredding horsepower.

While the official performance numbers are still hidden somewhere in Ford’s virtual vaults, I can tell you that the 2020 Shelby GT500 can crack 60 miles per hour in three and a half seconds and will probably top out at more than 190 miles per hour (I would guess it will go 200+ miles per hour, actually).

While the 2020 Toyota Supra A90 and the 2020 Shelby GT500 do not have much in common, both are treading over unknown fields of the automotive emporium. The 2020 GT500 looks to reinvent and re-imagine what the muscle car should be nowadays. Toyota, conversely, focuses on giving the enthusiasts new, beloved play toys christened with the holy Supra name. Only time will show if these two will hold up to scrutiny. The only certainty is that both are very good in what they want to be: precisely focused sports cars with some track aspirations.

Raising the Red Flag on TBML