Top Posts
Are We About to Witness a Wave of Unionisation Across...
Sweet Taste of Luxury: Barbados Holidays
Are Bond Yields Set to Keep on Rising?
Is the Recent 20-Year Low for the Yen a Net...
UK Inflation Jumps to 40-Year High
What’s the Cost for Anytime Banking?
Home Life Arts & Travel 2021 Volkswagen ID.3 Versus Nissan Leaf: Which EV Is Electrifying the Market?
Life Arts & Travel

2021 Volkswagen ID.3 Versus Nissan Leaf: Which EV Is Electrifying the Market? 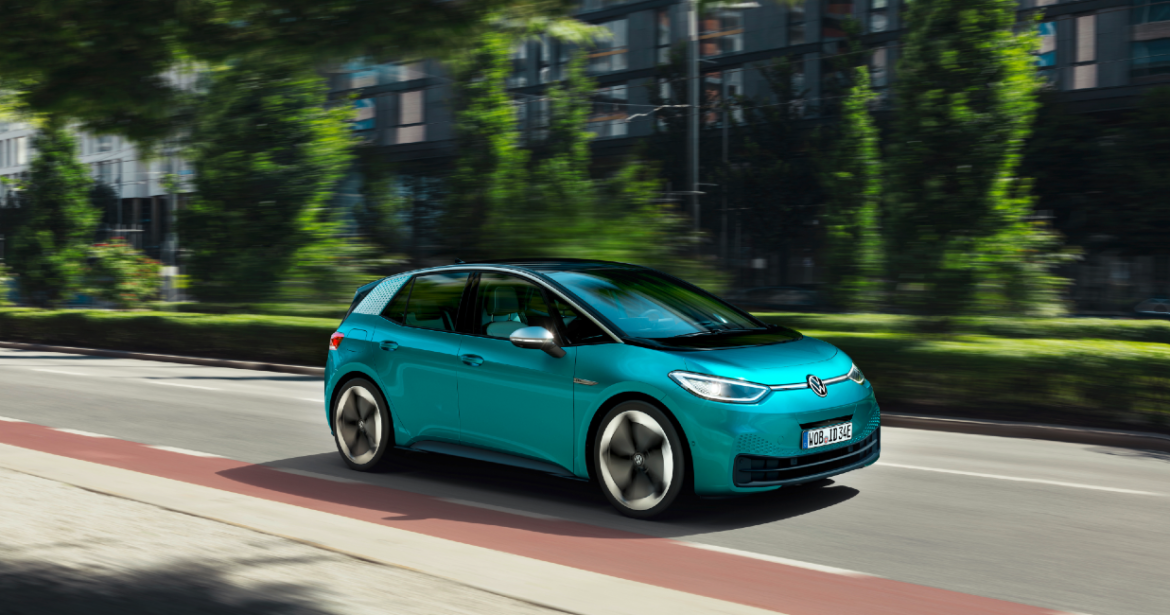 By now, we can safely say that electric vehicles (EVs) are fully established as a legitimate option when buying a new car. With the charging-station network growing each day and people becoming more open to the prospect of purchasing a zero-emission vehicle, more and more manufacturers are going “green” and offering battery-powered cars. At first, the electric revolution was headed by expensive and sophisticated models such as Tesla. Recently, more and more affordable EVs are entering the market, designed to replace everyday economy models. We will look at two of the most popular contenders in this field: the 2021 Volkswagen ID.3 and already well-known Nissan Leaf. Which of these innovative family hatchbacks is best? 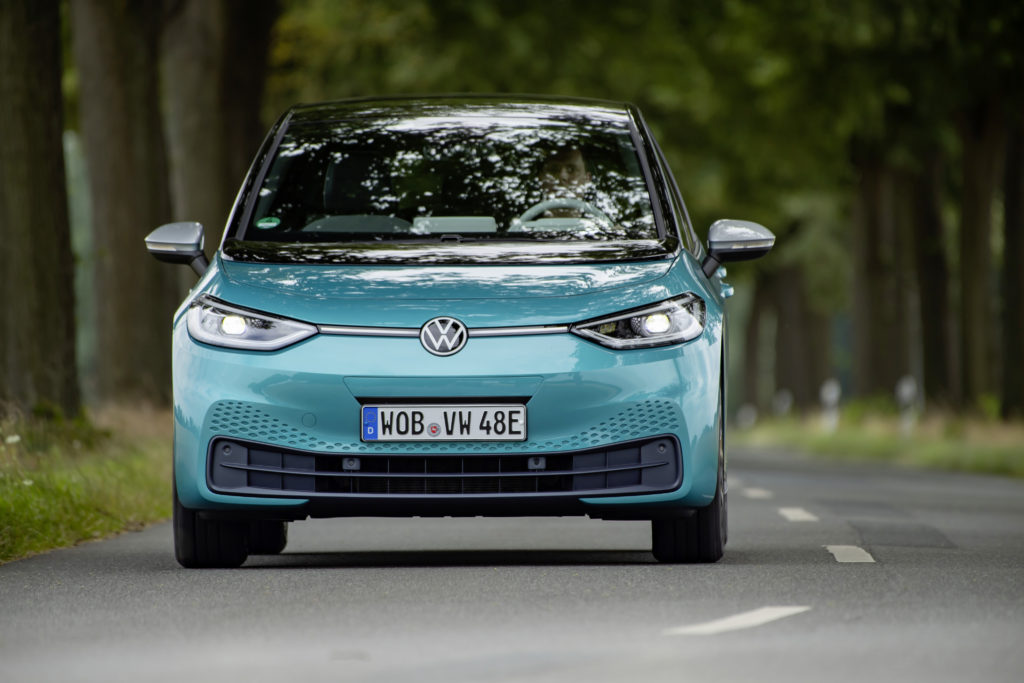 The Volkswagen (VW) brand was built up by inexpensive and immensely popular cars such as the VW Beetle and Golf, which sold in the tens of millions and made this company one of the biggest in the world. So, for the new millennium, Volkswagen’s strategists envisioned another family hatchback that would introduce the electric technology to the masses just as the original VW Beetle introduced the concept of motoring to millions of people back in the 1950s and ‘60s. The company prepared for the ID.3 for a long time, and the first concept was introduced back in 2016 when the electric vehicle was still considered a gimmick rather than a reasonable proposition. However, in late 2020, VW’s brand-new electric car was introduced and called ID.3, which stands for “intelligent design”—Volkswagen’s new design language dedicated to its electric vehicles. 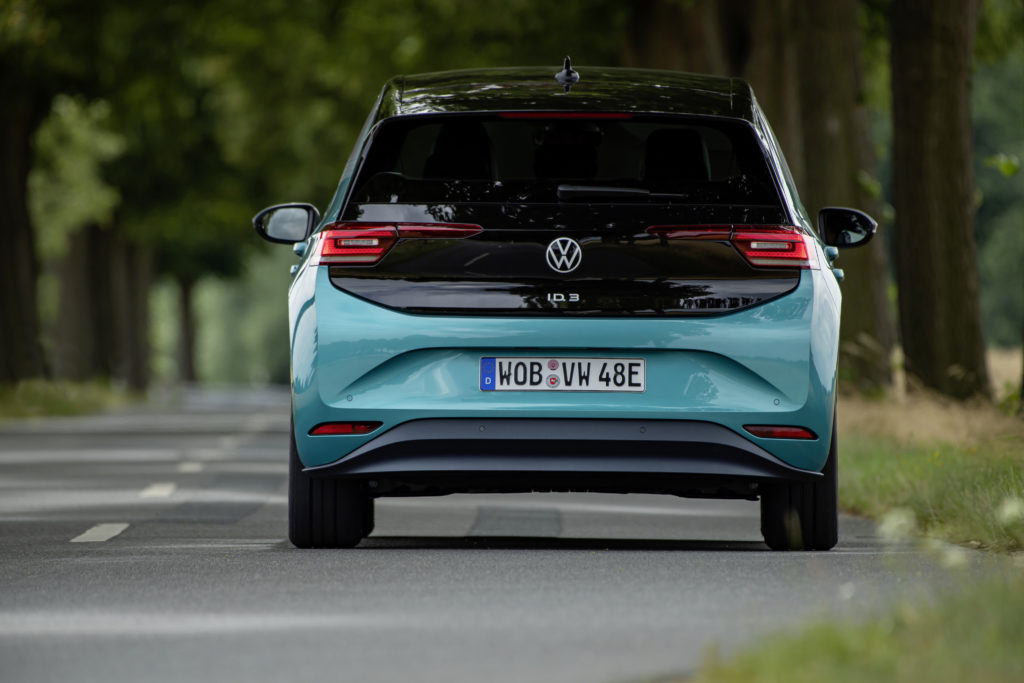 The 2021 ID.3 is based on Volkswagen’s all-new MEB (Modular Electric Drive Matrix) platform and features three power levels. The base model, called ID.3 Pure, is powered by a 45-kilowatt-hour (kWh) battery and has a range of up to 205 miles. The ID.3 Pro is powered by a 58-kWh battery pack and has a real-life range of up to 260 miles, while the ID.3 Pro S has a 77-kWh battery and can cover, pretty significantly, 340 miles on a single charge. Translated into horsepower, the ID.3 is available with 145, 150 or 204 hp on tap. This model is also offered in three different trim levels, which vary according to the car’s market. All versions are rear-wheel-drive with an all-wheel-drive model in the works. 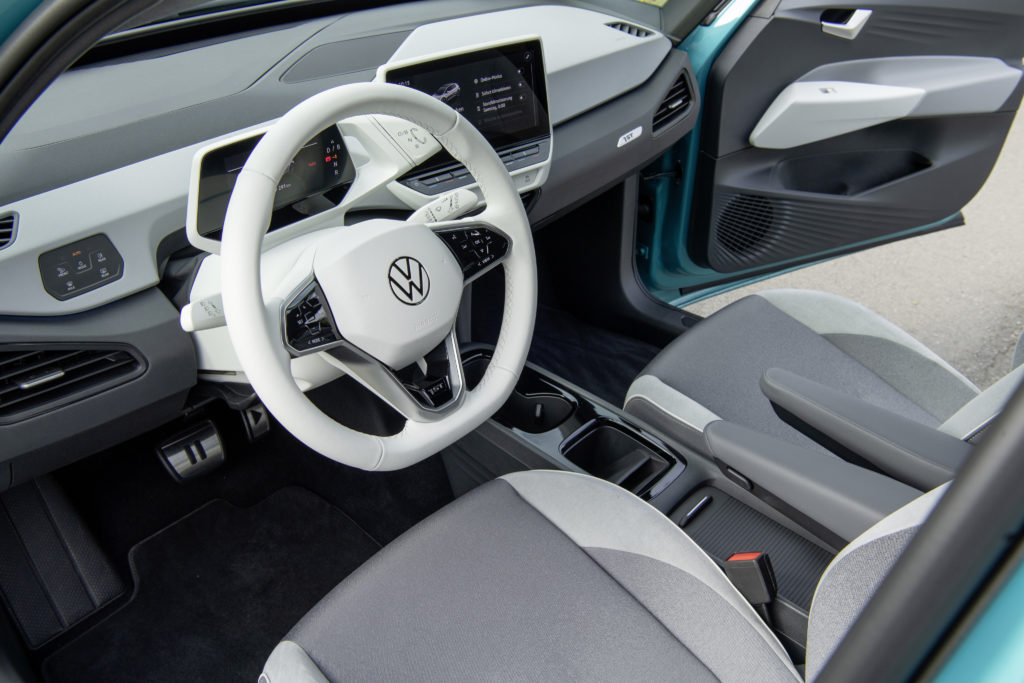 Due to its brand new platform and intelligent engineering, the ID.3 has plenty of room inside as well as a decent-sized trunk with 385 liters of space. Compared to the VW Golf, it is about the same size, but it has a slightly better shape. The interior design is very innovative, with a central touchscreen and infotainment system and also an attractive color combination and layout.

Since this electric vehicle was designed from a clean sheet of paper, using the latest technology, the result is pretty impressive, and the ID.3 is a very accomplished EV. The magazine testers and reviewers have praised its handling, range as well as fast charging times. The recognizable design and comfy interior complete the package, and we are sure that the ID.3 will be the Volkswagen Beetle of the electric-vehicle future. 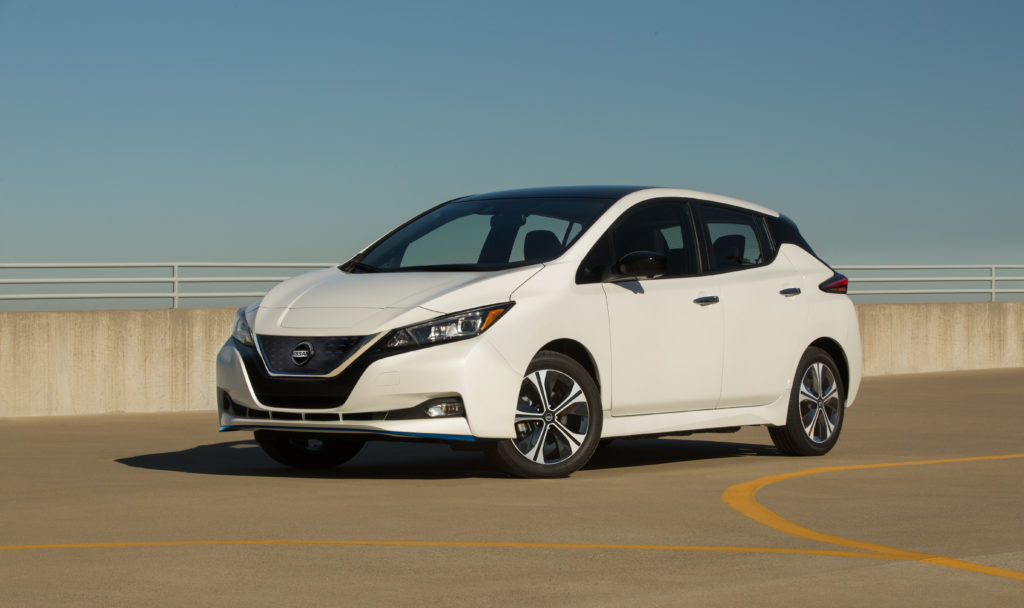 It is hard to believe, but this is the Leaf’s 11th year on the market, and this EV is one of the oldest battery-powered models continuously on sale. It was introduced back in 2010, and the second generation arrived in 2018. With global sales of more than half a million, it is also one of the most successful such vehicles being sold globally. When it was first presented, electric cars weren’t even a thing. Still, Nissan had faith in the concept and slowly improved its performance, technology and design, leading us to the current model and its formidable application, range and equipment. For the 2021 model year, the Leaf was updated to keep up with the competition and remain popular. 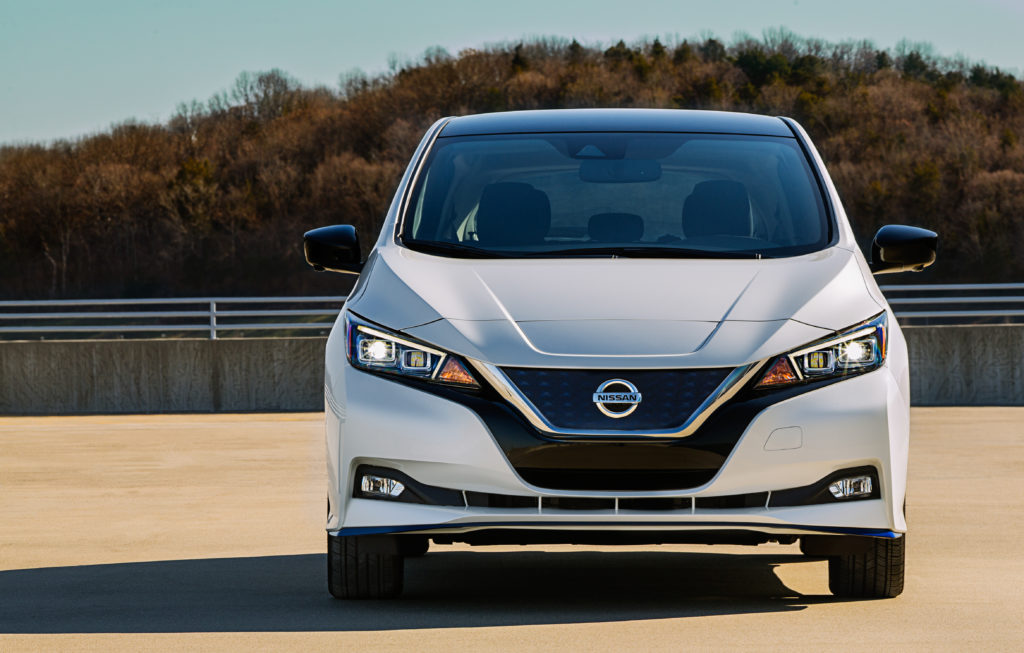 Its platform was jointly developed with Renault, and it is based on an ICE (internal combustion engine) chassis but thoroughly modified for EV use. This means that the Leaf is front-wheel-drive rather than rear- or all-wheel-drive like other similar models. Currently, there are two battery packs on offer, and the lineup starts with a 40-kWh lithium-ion-battery-powered model, which is capable of covering 151 miles of range. A more powerful battery pack consists of a 62-kWh battery, which can provide up to 226 miles of range. In terms of horsepower, buyers can choose between 148-hp and 215-hp engines in their Leafs. This EV is offered with three different trim levels, which are named differently depending on the market. Nissan deliberately made the Leaf slower to lengthen its range, aiming this model at sensible buyers who don’t need Tesla Model S acceleration but crave extended range and faster charging. 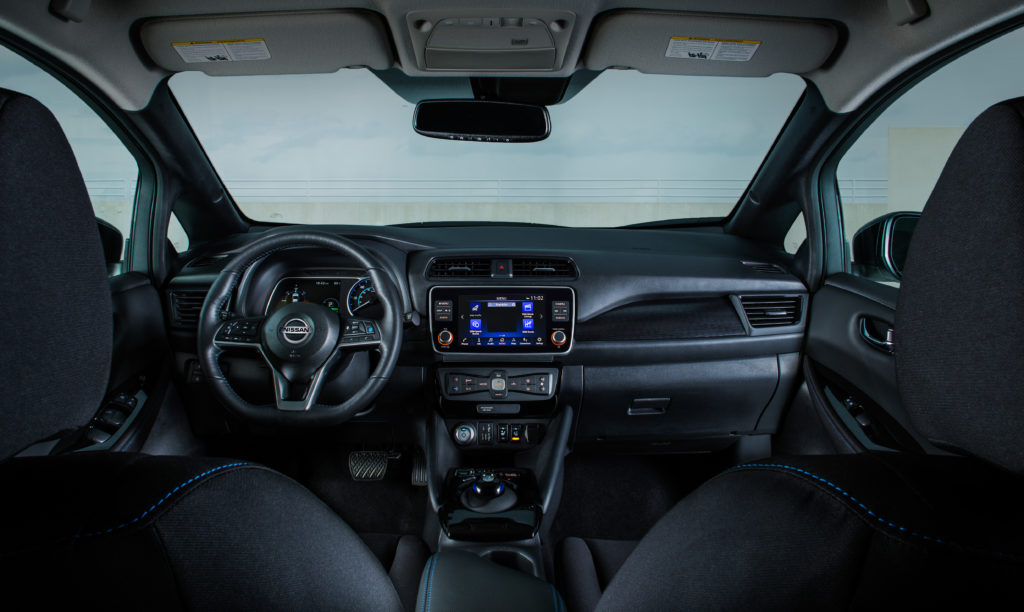 What it lacks in engine power, the Leaf makes up in trunk space, and with 435 liters of capacity, it is easily the biggest boot (trunk) in the class. The interior space is sufficient, and the dash design is modern and elegant but not as attractive as Volkswagen’s.

Even though the Nissan Leaf has a bigger boot and somewhat lower base price ($31,000) than the Volkswagen ID.3 ($33,000), it still cannot win this comparison. The reason is simple. The Leaf is an older design with fewer options, lower power, shorter range and poorer driving dynamics. Although it is less expensive and offers more interior space, the driving experience is not as good since the Volkswagen ID.3 is a more contemporary-engineered vehicle with rear-wheel-drive, better performance, higher top speed and significantly more range. Since electric-car buyers are deciding on their purchases based on range and performance, not solely on price, it is no surprise that in just a year on the market, Volkswagen managed to sell more than 50,000 units and beat the Leaf in some markets. Volkswagen also looks better and has a more modern option list with a wider choice of color and trim details, which appeals to some buyers. We are sure that the next generation of the Nissan Leaf will be even better, but the Volkswagen ID.3 is the clear winner for now.

Is Your Bank’s Client Portal Prepared For The Upcoming SWIFT Changes?

Are We About to Witness a Wave of...

Why would anyone buy a VW when they could get a Leaf? Brand loyalty is very important for VW purchasers.

The mileages you stated for the VWs appear to be tremendously over rated. The VW owners are seeing very poor real world efficiency numbers compared to a Leaf.

Bring this to North America…this would be the perfect replacement for the base Golf!

Are We About to Witness a...