Top Posts
How Gamification is Catapulting Digital Banking to the Next Level
Challenges Remain, But There Are Opportunities to Be Had in...
Interview with Mr. Olukayode Pitan, Chief Executive Officer and Managing...
Commodities Outlook for 2023
The Value of Cash in a Time of Crisis: How...
The US-Africa Leaders Summit: Fostering a Closer Relationship with the...
Home Life Arts & Travel Dynamiq’s GTT 115 Hybrid: a Sublime Vessel Designed by Studio F.A. Porsche
Life Arts & Travel 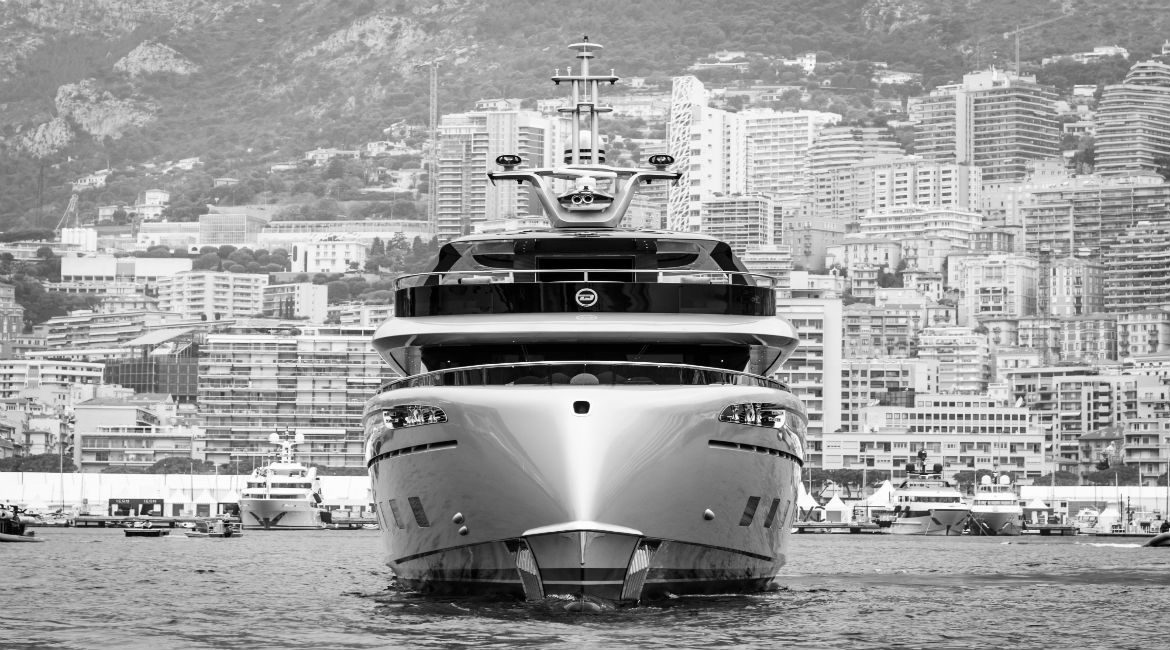 Although yacht manufacturer Dynamiq appeared only in 2011, its roots are well-heeled throughout the industry, thanks to its CEO Sergei Dobroserdov, a maritime lawyer and a long-time yacht broker. His vision, enthusiastically shared with the Dynamiq team, is to reshape the whole prospect of yachting. Their second yacht, the GTT 115, was revealed at the 2017 Monaco Yacht Show, docked right in front of the Monaco Yacht Club. Dynamiq actually has its representative office in the vicinity. Cool on Dynamiq’s part, for sure. Of course, next to its new entry, the GTT 115, the Monaco-based company docked their last year’s novelty: a 39-meter Jetsetter.

Sure, we are interested in the new yacht here—a 35-meter, aluminum masterpiece with hybrid propulsion (yes, that is right). She was designed by the Austrian design company Studio F.A. Porsche (a part of the Porsche Design Group), and, as you may imagine, she ties Porsche high-end sports-car design with the styling prospects of a yacht. More important is the fact that the GTT 115 is bound to revolutionize the yacht-buying experience. Dynamiq’s vision is a revolutionary one: to provide customers with the most immersive personalization system offered with yachts. In short, they offer as many options as one may find when purchasing a high-end luxury car.

In this case you can imagine a Porsche model. 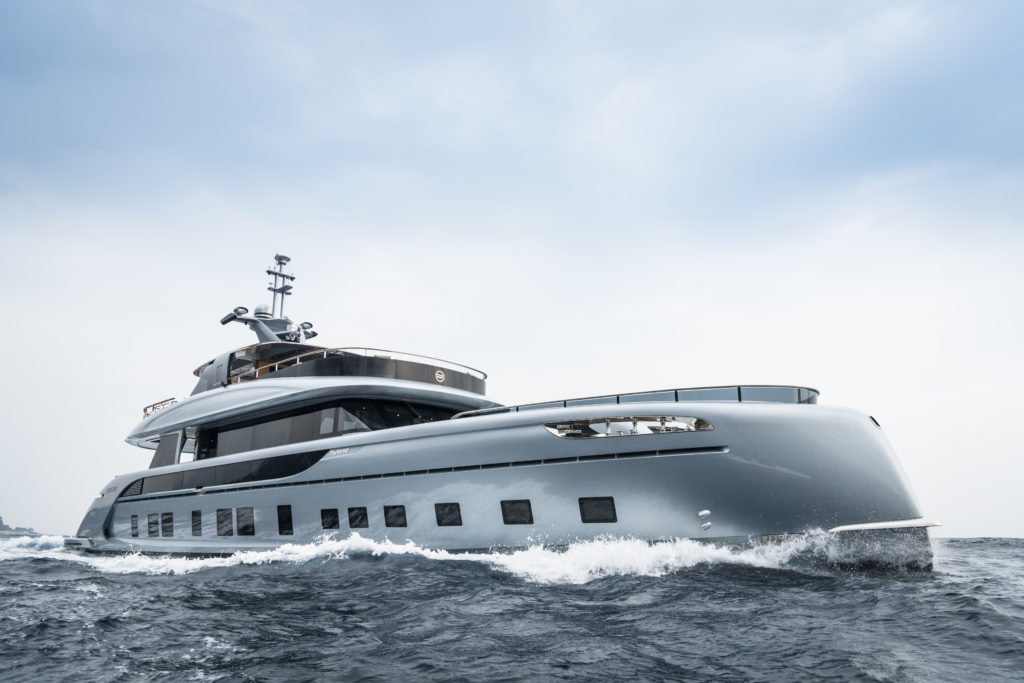 Roland Heiler, CEO of Studio F.A. Porsche, added: “Taking the spirit of high-performance sportscar styling to the high seas, the Dynamiq GTT 115 is designed to appeal to car lovers and forward-thinking yacht owners who appreciate the advantages of speed, style and our philosophy of intelligent performance.”

Design causes usually found on Porsche vehicles can be actually seen on the GTT 115. See the sunshade pillars at the top? The pillars are reminiscent of the Porsche 911 Targa car. Rear lights look suspiciously similar to what we can see on the 911. And then the front features “headlights”; four LED lights on each side create a quite stunning showcase, looking exactly like what one would see on a Porsche Cayenne or Panamera. 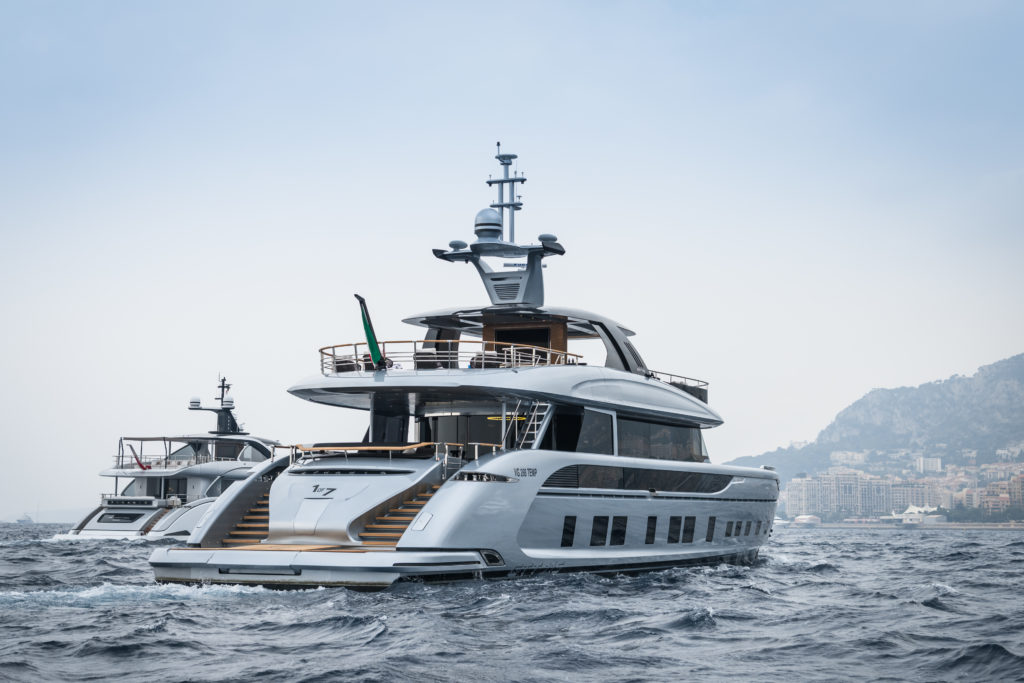 While the sheer looks—additionally accentuated by awesome, fashionable rhodium-grey metallic paint—accentuate its athletic but curvaceous lines, the real gold is where prying eyes cannot penetrate. Dynamiq CEO Sergei Dobroserdov is certain of one thing: the “GTT 115 is undoubtedly the most advanced superyacht at the Monaco Yacht Show with her round-bilge hull form, podded propulsion, Hull Vane and exclusively developed stabilization system with four fins and interceptors.”

The advanced technology does not only come in the form of a new hull form, or aerodynamically shaped aluminum surfaces, Dynamiq’s GTT 115 comes with hybrid propulsion. Apart from two MAN V12-1650, 1213 kilowatts at 2300 revolutions-per-minute engines, the yacht comes equipped with a pair of 20.8-kilowatt electric motors on the gearbox for low-speed sailing. She is a zero-emission capable yacht, after all. Now, thanks to its full aluminum body and build, round-bilge hull and special propulsion system composed of innovative 2x Fortjes 5000 POD drives with contra-rotating propellers, the GTT 115 is a trans-Atlantic-capable vessel. After all, it is all hidden in its name: the GTT for Grand Touring Transatlantic. At cruising speeds of up to 10 knots, it will sail for 3,400 nautical miles. On the other hand, if the skipper has a bit of Porsche blood running through his veins, he could push her to 21 knots.

All that in the best comfort known to man, mind you. At 35 meters long, she definitely won’t pretend to be among the biggest. However, the Porsche design team endeavored to create a unique experience for everyone on board. In that regard, the GTT 115 can offer exceptional comfort for six in three separate cabins. Dynamiq’s CEO Dobroserdov noted that when six passengers are on board, they can be served by a 1:1 ratio of six crew. Can’t get more luxurious than that, can it?

On the other hand, the GTT 115 can accept up to ten guests, depending on the layout the buyer chooses. 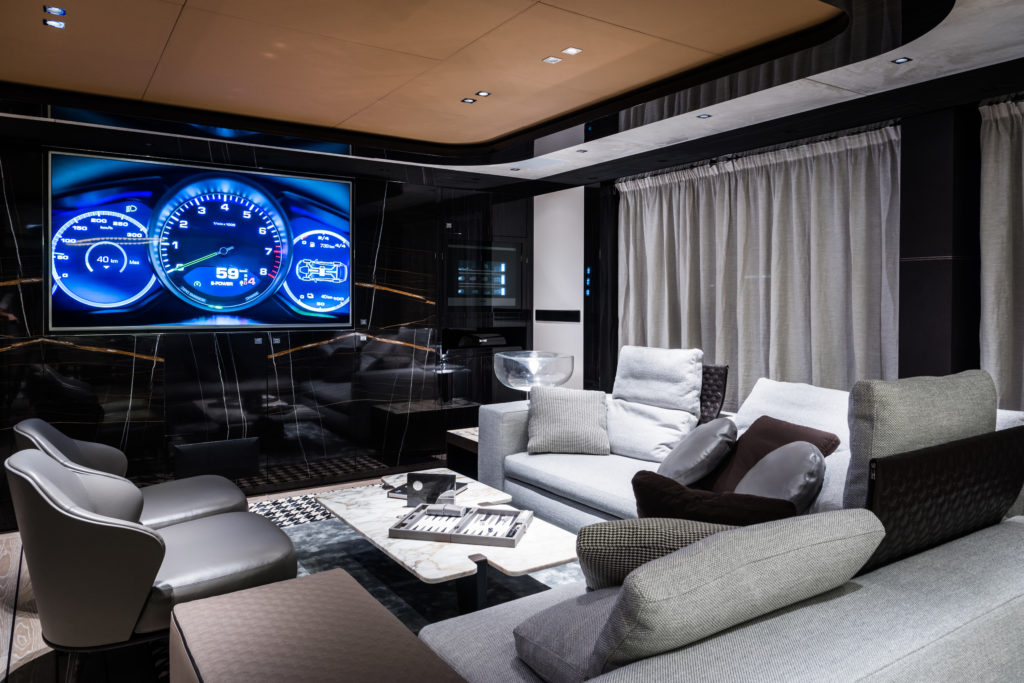 And that is where we come to the extreme personalization-options list. But one would not choose between dual-climate control or leather here. No, no, no. Some of the features listed include Pratesi towels for $45,000, Baccarat glassware for $53,000, crew call buttons in main deck aft, sundeck dining and pool area for $5,500, or even a freaking OpenROV v2.8 Kit Pro Bundle Sub-sea, remote-controlled exploration robot for $4,500. Of course, there are so many options, it would not be possible to list them all here. Instead, head to: Dynamiq Yachts, and try to make your own Dynamiq GTT 115 yacht.

As promised from the start, Dynamiq is more than transparent with their pricing. So, the basic version costs $14,740,000, but one can really go crazy with options. We managed to up the price to $18 million. Try to beat us.

To keep the yacht as exclusive (and elusive, it seems) as possible, the Dynamiq team decided to produce only seven units, with the first one being unveiled in Monaco. The production process should last for more than a year; but during that time, customers shall be informed about every single step of the build. Furthermore, as aforementioned, customers will be able to personalize almost every single piece of the yacht.

The GTT 115 features exceptional marble floors inside, best teak paneling on the decks and sublime 1000+ square feet of sunbathing areas. Heck, she can even have exterior infrared heaters for breezy nights in the middle of the Atlantic when watching that massive 75-inch Samsung screen on the top.