Top Posts
Are We About to Witness a Wave of Unionisation Across...
Sweet Taste of Luxury: Barbados Holidays
Are Bond Yields Set to Keep on Rising?
Is the Recent 20-Year Low for the Yen a Net...
UK Inflation Jumps to 40-Year High
What’s the Cost for Anytime Banking?
Home Life Arts & Travel Ireland’s Prime Country-Property Market
Life Arts & Travel 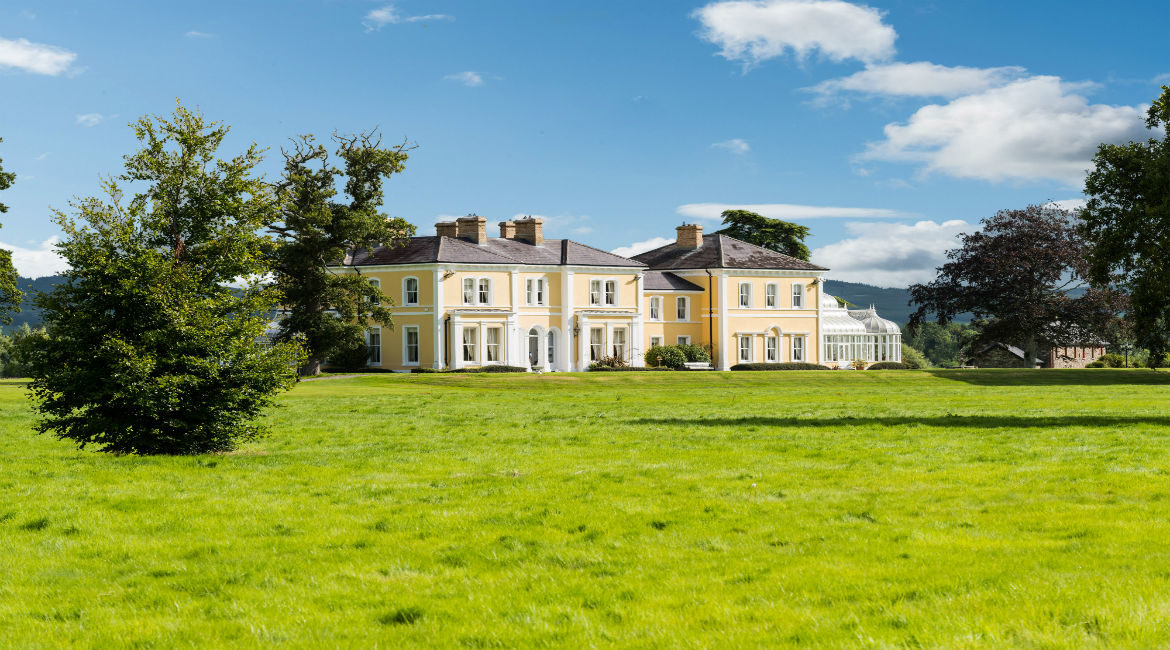 Our Country Agency team for Savills Ireland specialises in the sale and purchase of country houses—ranging from charming cottages to mansion houses, estates and farms. We cover the length and breadth of the island (including Northern Ireland) and work closely with our Savills colleagues in the United Kingdom and throughout the world to access an international database of buyers for the prime residential properties that we offer for sale.

So, how is the Irish market performing at present? The general strength of the economy in Ireland is resulting in an active market for residential property throughout the country. The monthly unemployment rate hit a 10-year low of 5.3 percent in December 2018, while residential transactions were up by 8.4 percent in volume for the year to third-quarter 2018. Although Dublin remains the central hub of activity, the favourable economy is having a positive ripple effect on the residential-property market throughout the country. For the prime country-property sales handled by Savills in 2018, 81.4 percent had competitive bidding, and an average premium of 5.3 percent was achieved in excess of the asking price.

The hottest topic of discussion in the market at present is the impact that Brexit is having on the property market. We are experiencing both positives and negatives arising from current political events at large. As with all unknowns, Brexit is creating nervousness, resulting in buyers and sellers choosing to sit on the fence until there is greater clarity. Supply at the prime end of the market has tightened, while some buyers—especially Irish—are playing a waiting game until the United Kingdom reaches an agreement with the European Union. This is playing into the hands of presently active buyers and presenting good opportunities at the top end of the market.

In 2018, 37.5 percent of our country properties were purchased by international buyers, while 87.5 percent of buyers were funding their purchases with cash. This demonstrates that there is still an appetite from abroad to invest in Irish property. As part of Europe, and one of the United States’ closest European neighbours, Ireland is attracting more businesses, resulting in a rising demand to purchase residential properties.

We have also experienced a recent increase in the number of enquiries, viewing requests and bids from UK-based high-net-worth buyers looking for prime country properties—with some having no previous connection with Ireland. The majority of these parties have a financial background, with some looking to permanently relocate to Ireland and others seeking a base in Europe. This increase in enquiries from the UK became apparent in the run-up to the UK Parliament vote scheduled for December 11, 2018, but subsequently delayed. Despite the unfavourable exchange rate, the enquiries from UK-based buyers have continued during January 2019.

In terms of what the market is looking for, we are noticing large regional variations in demand and therefore, values, with a similar trend between various property types (modernised or in need of renovation). International buyers recognise these variations in prices and frequently look to us for purchasing advice if we are not representing the seller. The best-performing locations are those within commuting distance of one of the cities or an airport.

Quality is still selling well, but any blemishes—such as the need for renovation or redecoration—must be reflected in the asking price to attract buyers. We are also seeing that society is placing a greater emphasis on energy-efficient houses and reflecting this in the bid price. While there is demand for period properties in need of complete renovation, buyers will account for the renovation costs in their offer prices, as well as the time lost in not being able to live in the house. A manageable area of land with a country house will attract a wider audience.

Properties with water frontage performed best last year. Water frontage can add between 25 and 50 percent to the value of a house. All of our sales of houses with direct access to the water had competitive bidding and were sold to cash buyers. They averaged a 24.8-percent premium above the asking price and had an average marketing period of seven weeks.

The top end of the market is the most price-sensitive. Those high-net-worth individual buyers looking for a prime home are seeking perfection before they are prepared to pay a premium price. Large houses are presently attracting as much interest from commercial buyers and institutions as private individuals, with a diverse range of uses for the property. However, the recurring theme is that they will pay only a price that makes the property and their business commercially viable.

Despite the political uncertainty, we believe that the confidence in the market for prime residential properties in Ireland will remain firm while the economy is favourable, with international interest strengthening. However, supply and volume of transactions are likely to be limited until an agreement on Brexit is reached, and there is greater political clarity.

The Savills Country Agency team have a range of properties available for sale. A selection of these are showcased below. 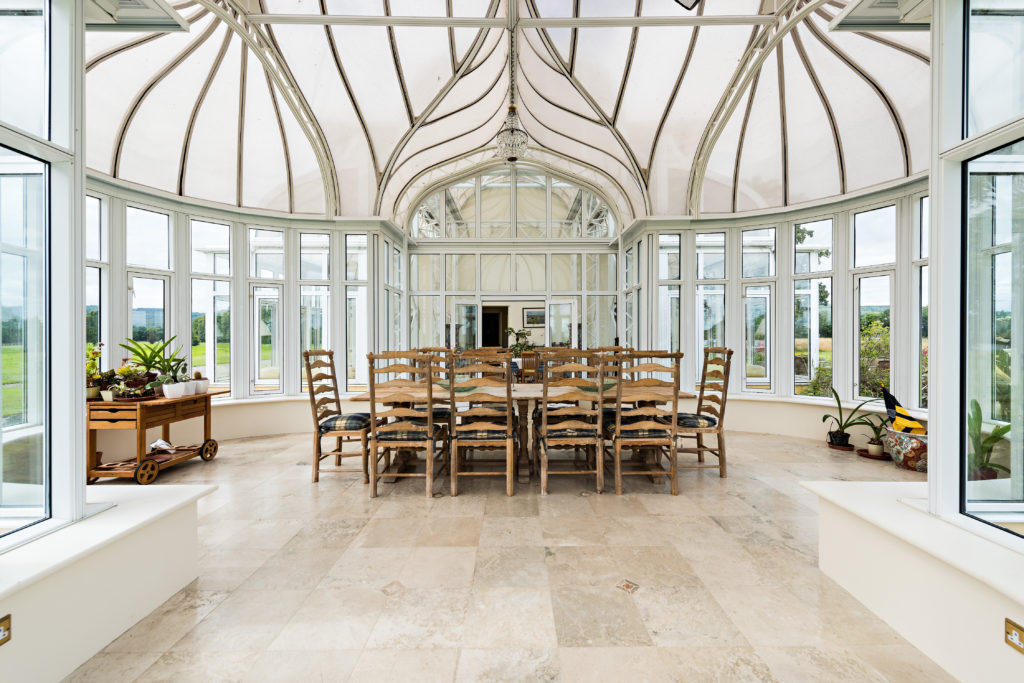 Rocketts Castle Estate is an attractive and peacefully situated residential, agricultural and sporting estate extending to about 250 acres (101 hectares). Located on the edge of the River Suir, the third largest river in Ireland, it is fantastically secluded yet easily accessible to major cities in Ireland and to Dublin’s international airport.

At its core is a superb, fully modernised country house dating from 1850 with beautifully proportioned and well-balanced accommodations. The estate includes immaculate formal gardens (including a walled garden), informal grounds, parkland and woodland plantations. 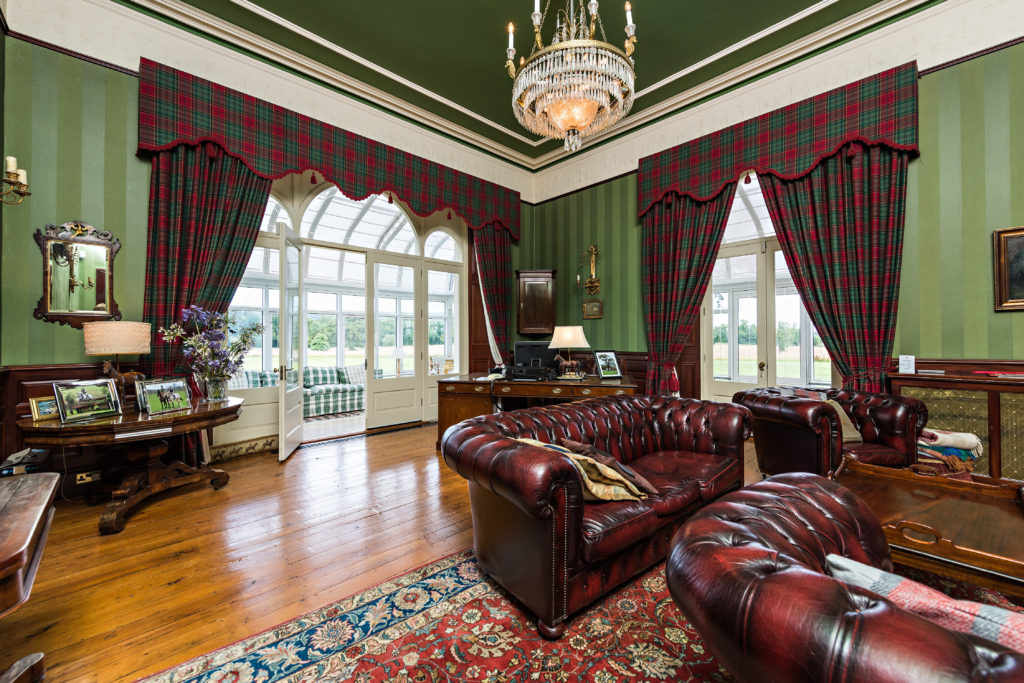 The equestrianism at Rocketts is a feature, with a hunter trial course (including 18 fence jumps and two water jumps), eight loose boxes and ancillary stores. The estate is also home to the Rocketts Castle Polo Club, and the Waterford Hunt meets at Rocketts Castle.

The historic city of Waterford is world-renowned for its famous crystal- and glass-making industry. The fifth largest and oldest city in Ireland, it lies 22 kilometres to the east of the estate and provides a full range of services, amenities, education and cultural activities. It is home to one of the country’s major ports. 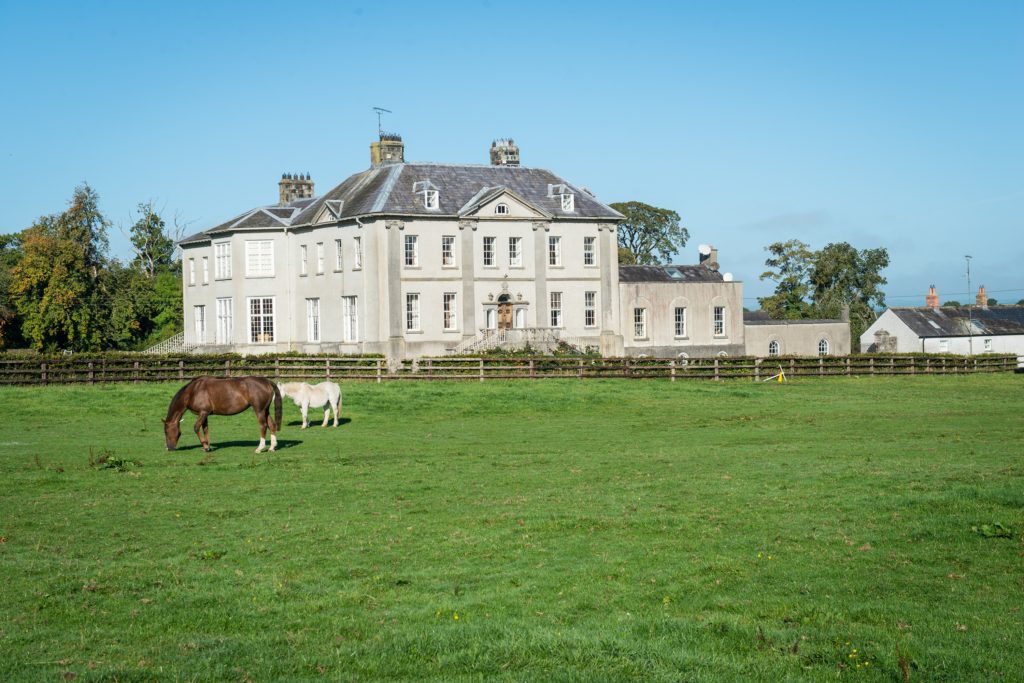 Mountainstown house is an impressive early 18th century Georgian mansion of immense charm and character surrounded by 120 acres of parkland, paddocks and mature woodland. The estate is in the unspoilt countryside of rural Meath, one of Ireland’s counties renowned for its rich heritage and excellent lands. Built in 1740 and owned by the same family since the mid-1750s, the house has a fascinating history, and its interior reflects this. 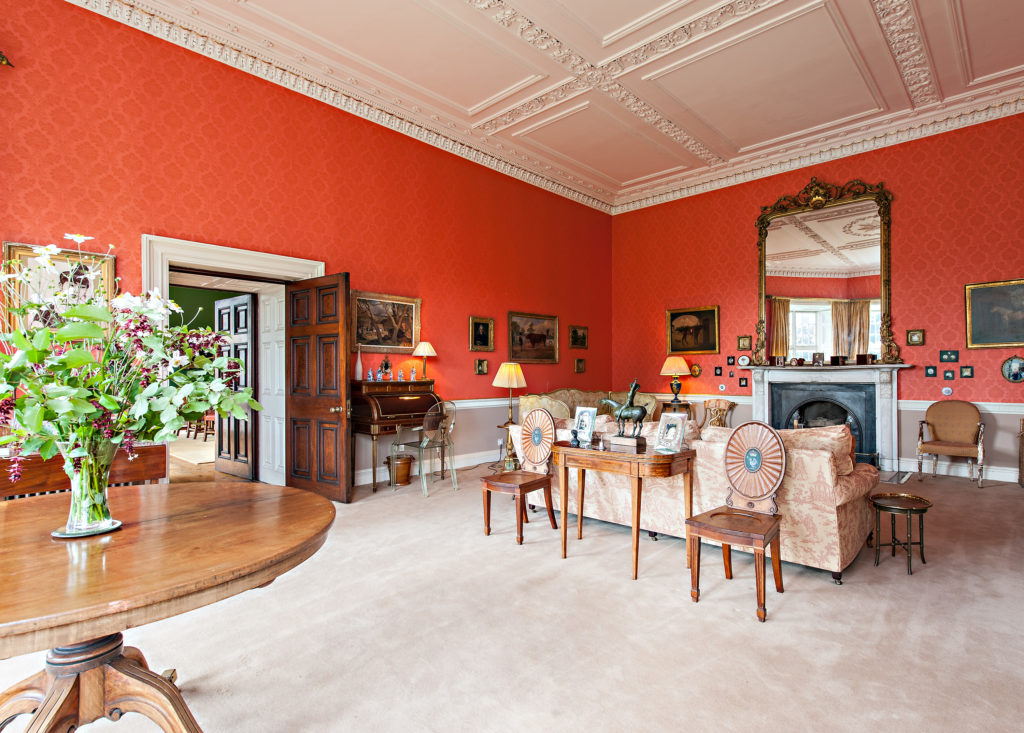 The residence stands three floors over the basement and is approached from the road by two symmetrical avenues that sweep through the landscape to the broad gravel forecourt. A double set of balustraded stone steps lead to the grand reception entrance hall with its beautiful ornate plaster cornicing and fine, wide staircase. The staircase, with carved brackets, leads to a classic Georgian galleried landing, and there are extensive views over the rolling Meath countryside from every window. 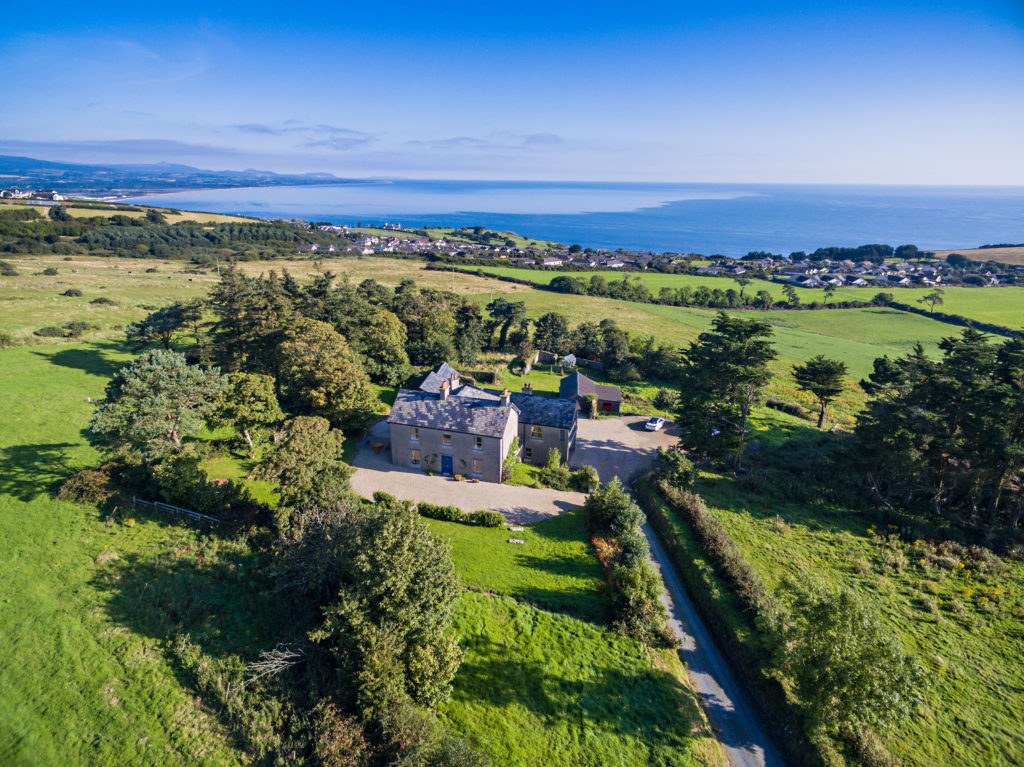 Wingfield House has some of the most spectacular views in Ireland. It is positioned overlooking the Irish Sea, where the view stretches from Howth to Arklow. 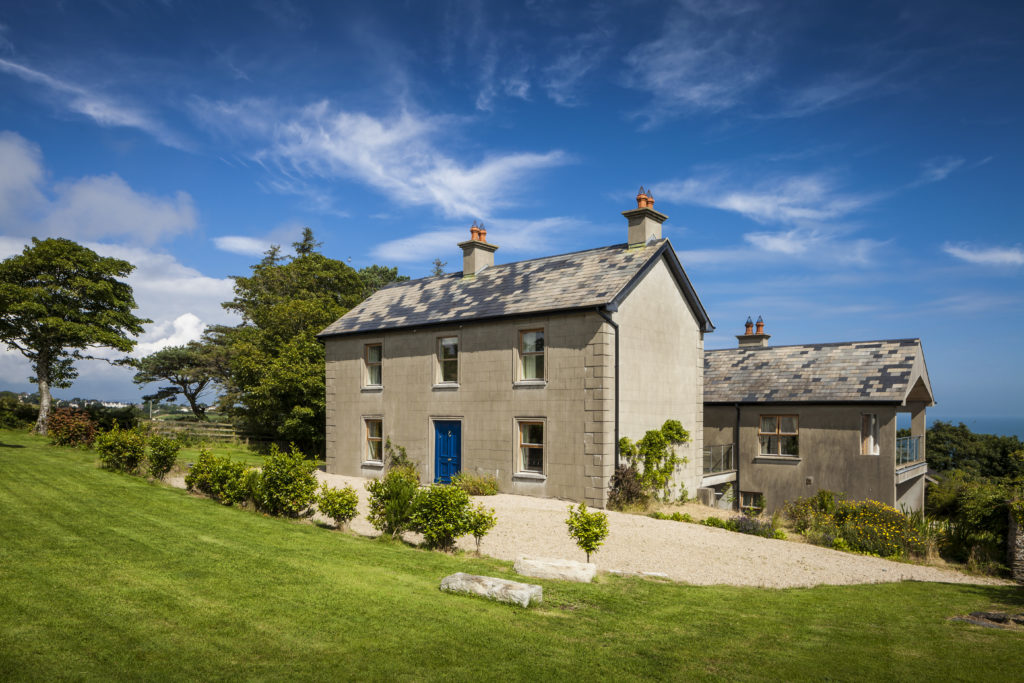 This five-bed, five-bathroom house is architecturally designed, an adaptation of an original farmhouse that was extended and refurbished to simultaneously take advantage of the private, secluded location and to capture the breathtaking scenic views.

Co. Wicklow, known as the Garden of Ireland, boasts unspoilt countryside with mountains, upland lakes, steep-sided glacial valleys, forests, farmlands together with a rugged coastline and pristine beaches, and within a short drive to the blue flag beach at Brittas Bay. The beaches, harbour and inland waterways along the east coast offer a wide variety of fishing, boating, swimming, surfing and sailing activities. Equestrian enthusiasts are also very well catered to with numerous show-jumping, polo and cross-country stables nearby, and larger events throughout the year, including the local Wicklow and Bray Hunts, which meet weekly during the season.

The Role of Stress-Test Supervision

Are We About to Witness a Wave of...

Are We About to Witness a...