Top Posts
Challenges Remain, But There Are Opportunities to Be Had in...
Interview with Mr. Olukayode Pitan, Chief Executive Officer and Managing...
Commodities Outlook for 2023
The Value of Cash in a Time of Crisis: How...
The US-Africa Leaders Summit: Fostering a Closer Relationship with the...
Three Key Sectors in Which to Invest in 2023
Home Life Arts & Travel The British at Their Best: Super SUVs Range Rover SV Coupé and Jaguar F-Pace SVR
Life Arts & Travel

SUVs took us by storm. German, Japanese, Korean and American SUVs dominate markets all around the world. But even though British SUVs aren’t as numerous on the roads as others, they are just as good, as mean, as luxurious and as fast. Especially now after Range Rover revealed something called the SV Coupé, and Jaguar showcased the much-anticipated F-Pace SVR.

This is the world of utter SUV opulence, unchained luxury and unhinged lavishness.

I became somewhat accustomed to seeing SUVs of this stature, and despite despising these contraptions 10 years ago, I like them now. I am a car guy, and yes, I would proudly and gladly own the Jaguar F-Pace SVR and almost every one of its competitors.

JLR’s (Jaguar Land Rover’s) Special Vehicle Operations (SVO) did a cool job on the F-Pace, nearing it to the extreme world of the Alfa Romeo Stelvio Quadrifoglio and the like. Looking at the contraption, it is obvious that the F-Pace SVR is slightly different compared with the maddest “civilised” version, with the 380 horse-power supercharged V6. Yet, the additions do seem to follow sophisticated lines and curvatures so the F-Pace SVR very cultured. Carefully investigating the changes, I found out that the front fenders were widened a tad. Obviously, grill decorations include the red Jaguar emblem and the SVR logo. More importantly, the front-air intakes on the bumper have a much bigger surface. Yet, with simple mesh design, they do not seem tacky, nor unnecessary. In fact, these intakes are more than necessary. 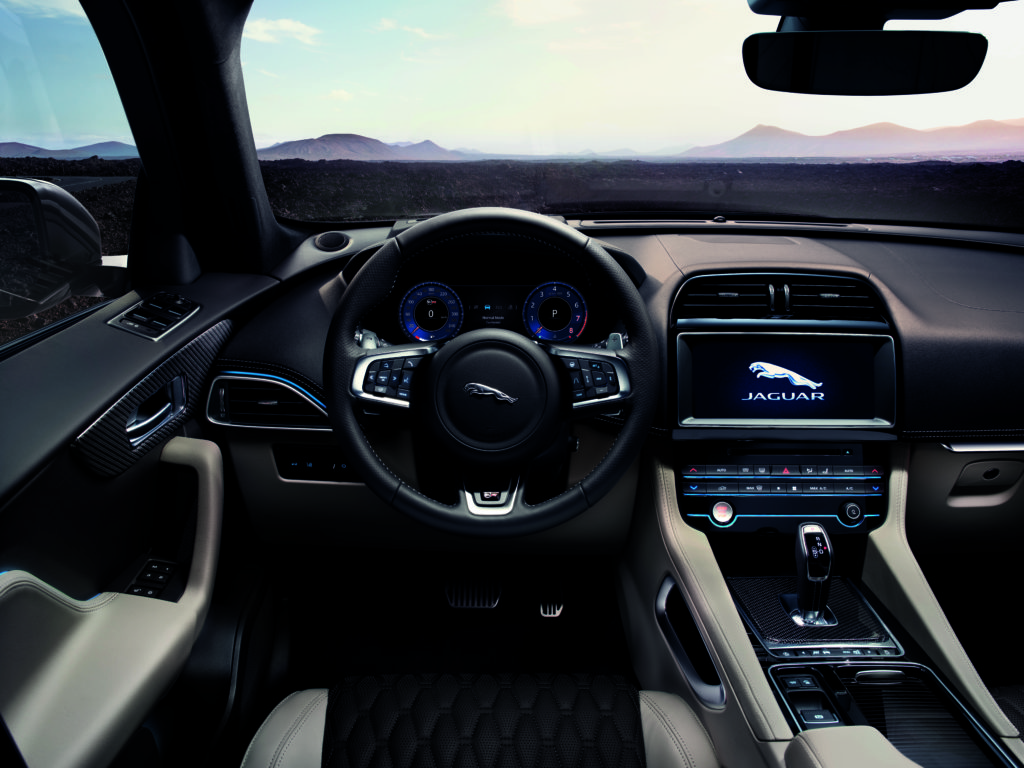 They channelled the air and added cool new brakes; SVO installed 15.5/15.6-inch-diameter, two-piece discs. The brake discs feature an advanced two-piece construction trying to reduce weight. Wheels, too, have a lightweight design, despite being 20 or 21 inches in diameter. Wheels had to be massive for a reason (not only for show off). Jaguar F-Pace SVR sports rather beefy tires. 265-width in front and 295s in the back do promise exceptional road-holding capabilities. Especially now with the updated chassis and suspension.

The SVO team wanted to reach 5 percent reduction in body roll. They achieved it by stiffening up front and rear springs by 30 percent and 10 percent respectively. Sure, more work was done to the anti-roll bar setup and the dampers. They achieved the reduction in body roll, which was the first step toward making the F-Pace a proper SVR. Active Differential, new power steering and adaptive suspension were adopted to serve treacherous SVR dynamic requirements.

Now, all of this would be only cool if SVO had not upgraded the engine. The biggest news out here is the installation of the V8 supercharged engine. The five-litre we saw in every single badass JLR car found its place in here, too. 550 horsepower and 502 pound-feet of torque is a massive upgrade from the 380 horsepower of the most powerful V6. Coupled with the Variable Valve Active Exhaust System, the V8 could be the most sonorous Jag of them all. Sure, you can control it at a touch of a button, between what I can only imagine to be civilised and barbaric. This car could handle a bit of barbarity. After all, it is a Jag SUV capable of reaching 62 miles per hour in 4.3 seconds and hitting exceptional top speed of 176 miles per hour. It is as quick as the Macan Turbo Performance Pack, a bit faster to be precise.

Not many three-door SUVs out there, are there? Actually, it is safe to say that almost all of them failed. People just do not buy them. So, Land Rover and their SVO Technical Centre endeavoured on an adventure of building 999 units of the remarkable Range Rover SV Coupé. The first Range Rover Coupé of all time. Although its starting price is $295,000, I am quite sure that Range Rover can find 999 buyers for the SV Coupé.

So what sets it apart from all other Range Rovers? 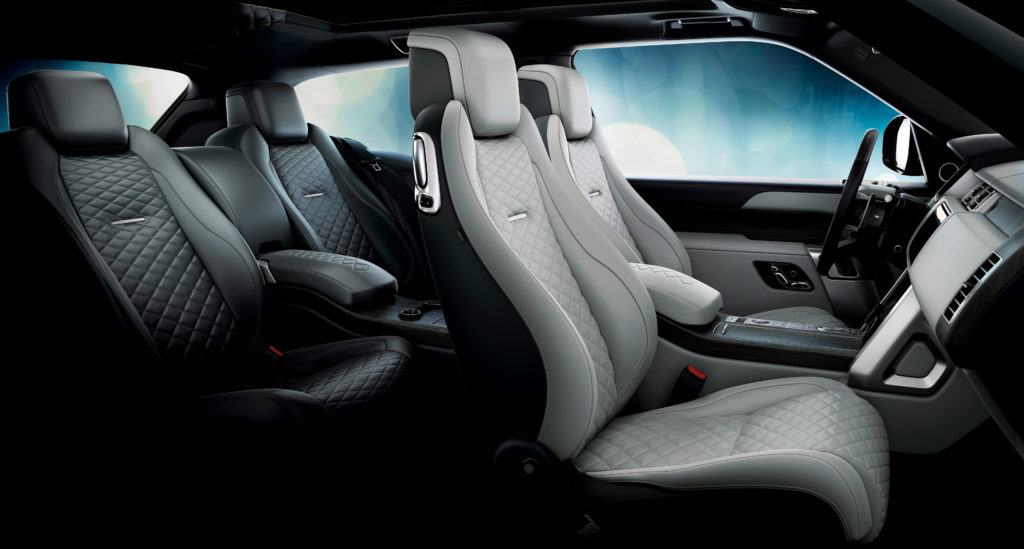 First of all, it does not have five doors but three; and if you look really closely, you may see that all of its body panels (save for the bonnet and rear gate) are all new. Despite retaining the same wheelbase as the “normal” Range Rover, the SV Coupé is a tiny bit longer, 100 millimetres lower and a tad wider. SVO wanted to make it a “driver’s car”, as some Range Rover officials did report. And they had a lot of time to do it. It seems that they started working on the project four years ago. This only goes to show that the Range Rover SV Coupé is a thoroughly reimagined car. 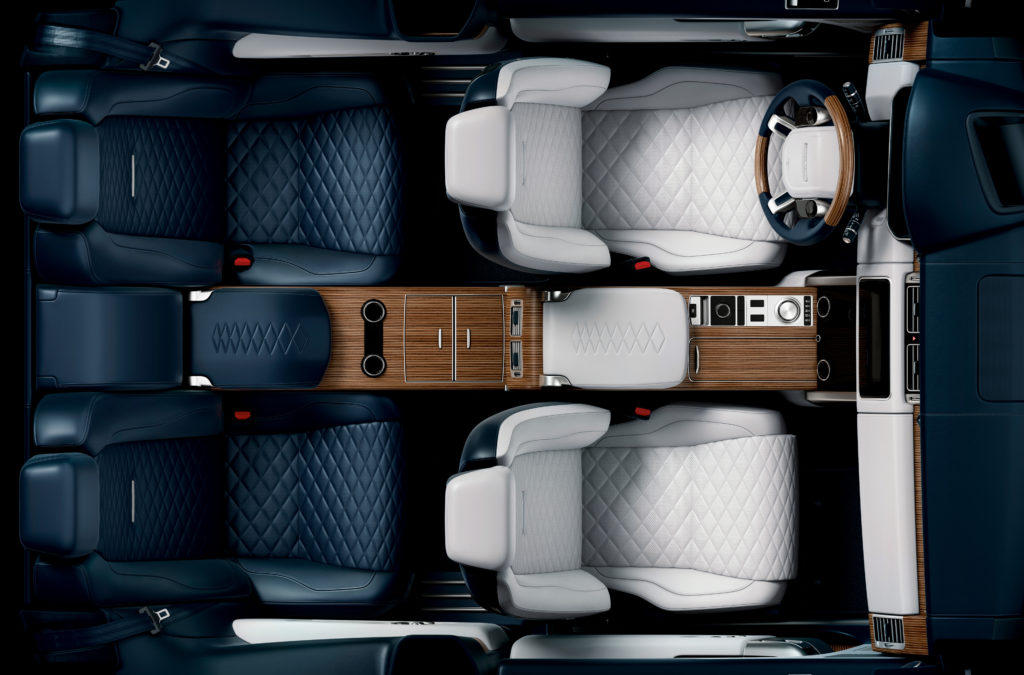 Although stylistic changes are numerous and noticeable, it seems to me that the sloping roof, super detailed rear lights and exceptionally elegantly imagined frontend do show the real level of refinement the SV Coupé brings. It is a car that can compete with the Bentayga and, I presume, the new Rolls-Royce Cullinan.

To achieve this, the SVO team dug deep through the Land Rover luxury bin, and they found some gems. Almost literally, as semi-precious materials can be used for badges and other detailing. Other personalization options include almost anything you can possibly imagine. Choose any colour for the exterior or the interior detailing. One-tone option, two-tone option? All available. Even if you have a family crest you would like to see embroidered on the leather, SVO will comply.

Although all of this sounds exceptional, it also does suggest that the Range Rover SV Coupé buyers will spend a lot more than $295,000 for their unit. In fact, Jaguar-Land Rover’s Special Vehicle Operations director, Mark Stanton, suggests that buyers will probably spend 20 percent more for personalization options alone.

Yet, regardless of the opulence and luxury of the SV Coupé, I am curious about that rear-seat entry. The doors are massive, no doubt there, but it may be that getting on the backseats isn’t a dignified task. No one will complain after they sit in the best quilted leather imaginable.

Sure, the Range Rover SV Coupé had to remain a proper Range Rover. All-terrain ability is definite; the car can wade through 900 millimetres of water and can tow up to 3.5 tonnes.

It is a proper Range Rover. One that is utterly luxurious, super cool, really capable off road and can hit 60 miles per hour in five seconds on its way to a top speed of 165 miles per hour.

So, there you have it: two exceptional British SUVs—one pushes boundaries when it comes to speed; the other is all about utter luxury. You simply have to like them both.

Accounting for the Banking Industry’s Preference for Blockchain over Bitcoin