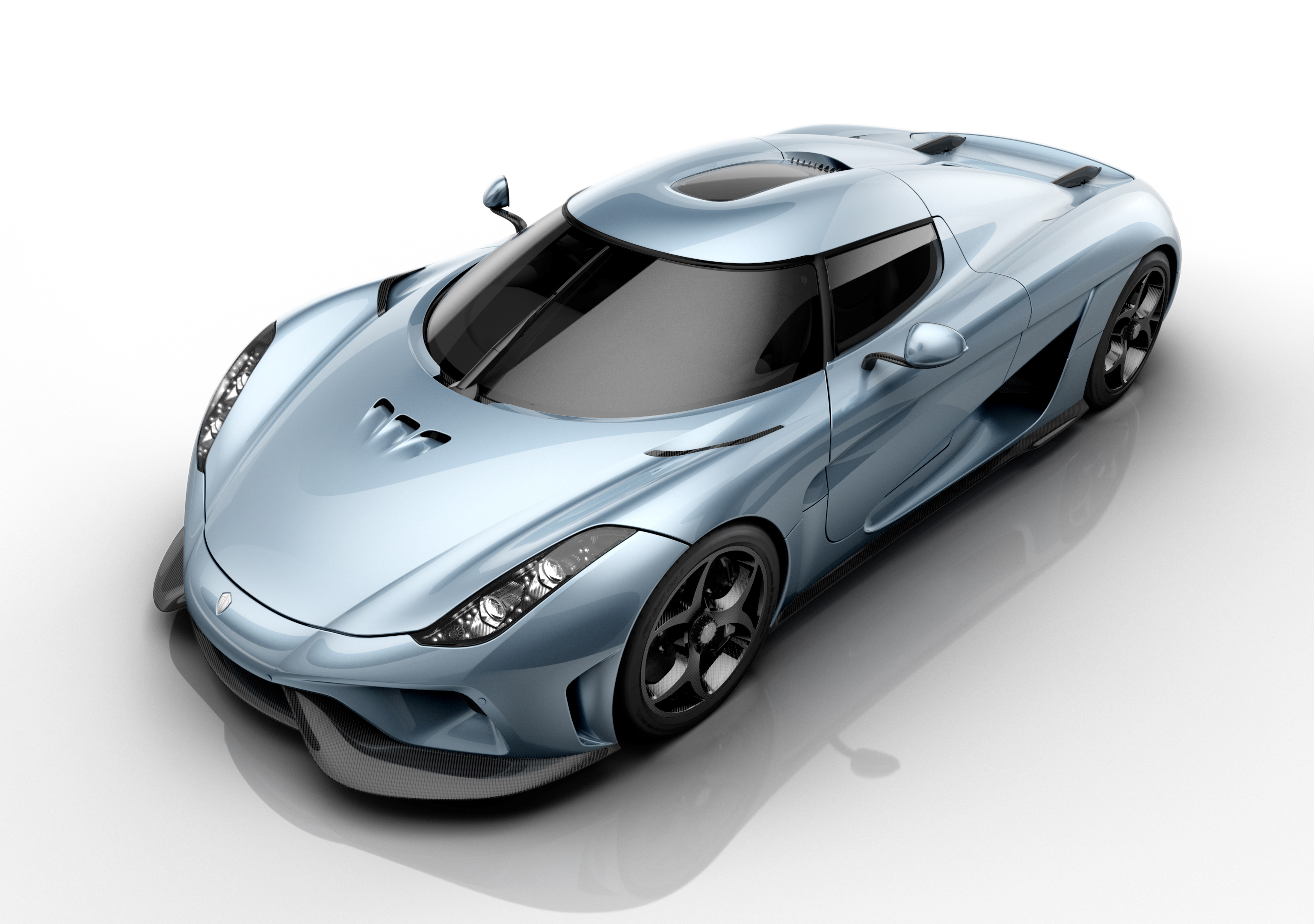 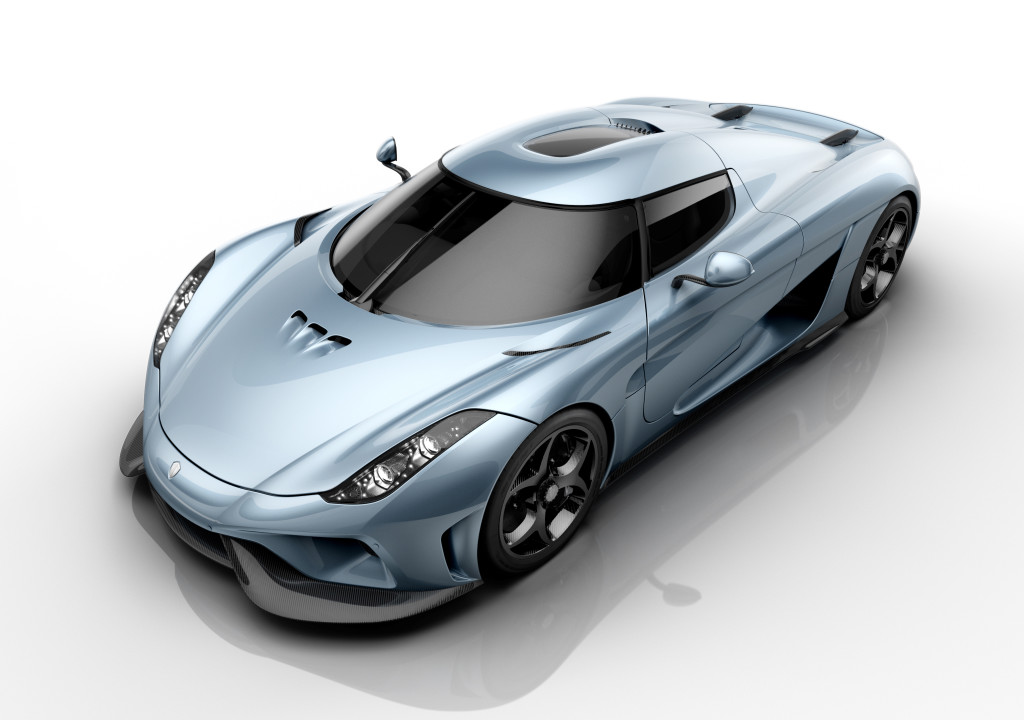 Reaching the heights of a Koenigsegg or Bugatti is something only a few dedicated manufacturers can do. These two vehicles are at the pinnacle of car design and also of the car industry as a whole. This was evident at this year’s Geneva Motor Show in March, at which Koenigsegg and Bugatti went head-to-head. The fight, however, wasn’t a classic fight between the titans of the car world but rather a clash that showed from where we’ve come and to where we’re going. Revealing the last produced Veyron ever, Bugatti warmed the hearts of all at the show, as if showing kittens and puppies. On the other hand, Koenigsegg, with its monstrously powerful and unimaginably advanced Regera, drew adrenaline out of every human being who viewed it at the show. 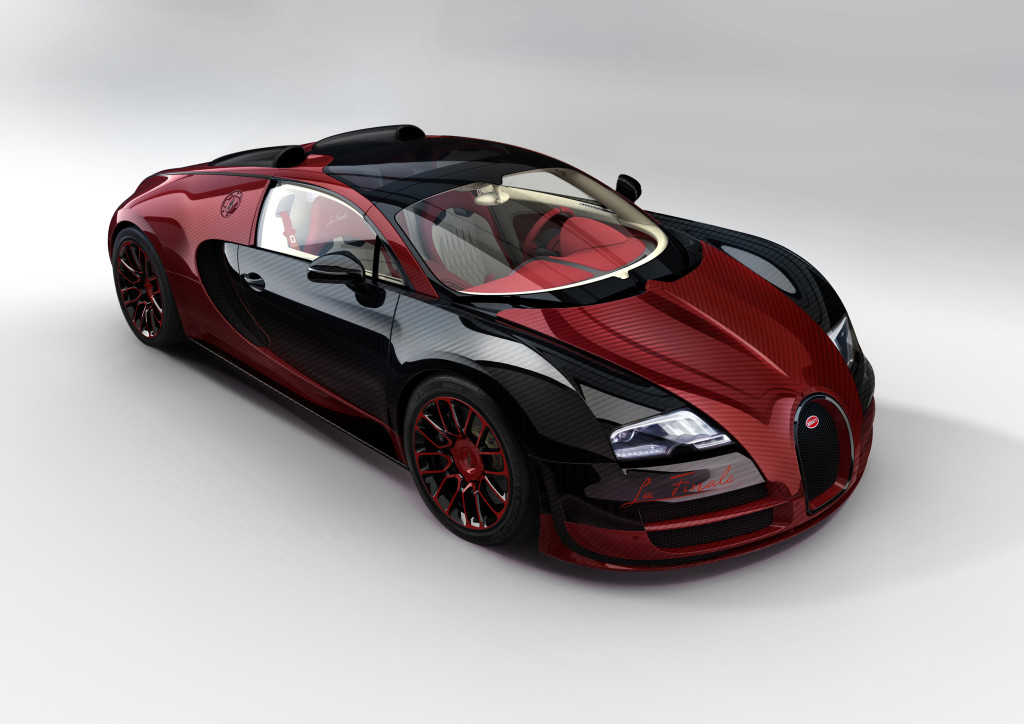 Bugatti has produced 450 units of the Veyron in the last 10 years. When it was introduced and up to the moment when the last one was sold, the Bugatti Veyron was the best and fastest car the world had ever seen. Being at the pinnacle of the ever-changing car industry for such a long period is something only a few cars in history have succeeded in accomplishing. The truth is that the last Bugatti Veyron Grand Sport Vitesse La Finale unveiled at the Geneva Motor Show is basically the same car that was revealed 10 years ago. Clearly, some changes have been made, but the chassis, engine, interior and tech stayed much the same.

When it was envisioned, the Bugatti Veyron was meant to rule the world. Advanced chassis, four-wheel drive, a massive quad-turbo W16 engine and the hardware to keep all of that together were the elements that were miles ahead of anything any other car manufacturer had ever offered. Acquiring the money needed for the project was something about which Bugatti, a French-based subsidiary of Volkswagen, did not have to worry all that much. Volkswagen had their back. But in the end, the money invested in the development of the car could never be earned back, despite the price tag of more than one million USD per car. So why did they make it?

The reason is simple—Volkswagen needed a halo car able to do everything better than any other car that had ever existed. Boy, they’ve made it work. Apart from knowing that the Bugatti Veyron still is the fastest thing on four wheels, it is also one of the five most advanced things on four wheels. Even before Bugatti revealed the Veyron Super Sport (on which the Veyron Grand Sport Vitesse La Finale is based), the tech involved behind it was mind-boggling. We will only mention a few problems that Bugatti (actually Volkswagen) engineers had to solve before putting the car on the road.

Now, imagine driving a car at more than 250 mph and hitting something such as a bird, a small rabbit or even a hedgehog. “The effect might be disastrous,” said one of the Bugatti executives when he was asked about this. In order to solve this problem, Bugatti used titanium (very strong and light material, which isn’t exactly abundant) in making the grille.

The tires were another concern, and the special set on the Bugatti (which cost 20 grand) can last only 15 minutes at full speed. No other car on earth ever had such “unsolvable” problems before. Also, the fuel pumps used by all other cars were just too inefficient. Volkswagen had to make a new one that could feed a W16 eight-liter beast pumping out 1,000 HP (1,200 HP for the Super Sport). The fuel pump used on the Veyron can pump fuel at a rate eight times faster than what is usually seen. The reason is simple: The engine needs so much fuel when it runs high because its fuel tank (100 liters) can be emptied only in 50 miles. Actually, it sips that much fuel only when it’s going as fast as it can…but c’mon.

Now, this is what we would call a breakthrough. The Veyron itself is a breakthrough that laid the foundation for all other cars and was a crown jewel of the automotive industry of yesterday. It was the best humans could do with the internal combustion engine using the technology available, and it is a car that will rest in museums as a testament of human ingenuity in centuries to come. Because of its enormous influence on the car world, its final edition, the La Finale, will always be very important. 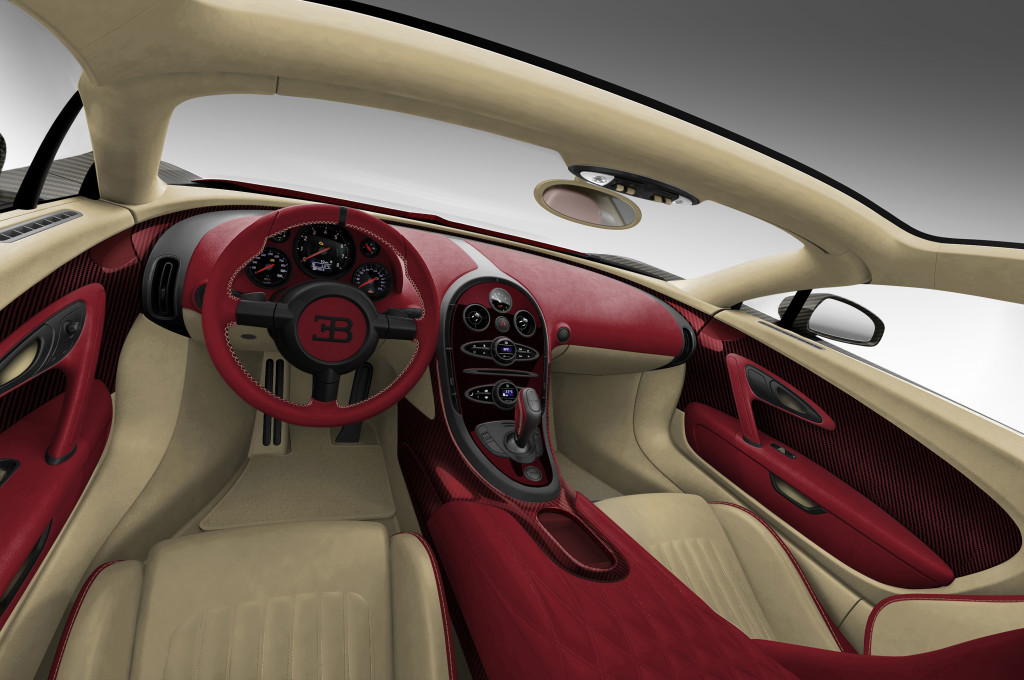 In order to make the Bugatti Veyron Grand Sport Vitesse La Finale really special, Bugatti did some really bizarre things. First of all, by unveiling the car at the Geneva stand next to the first Veyron ever produced, visitors could see the resemblance. Both cars wore a two-tone paint job consisting of really nice-looking maroon and black. However, the newest car had a carbon-fiber effect, and actually it wasn’t only an effect as the car is built from the material.

Other highlights include specially crafted elements in the cabin. The level of craftsmanship is so high that we doubt that any other car in the world has such a perfectly executed cabin adorned with elements such as the well-known bronze Bugatti elephant statue and silk beige leather covering every element you see. This, with the knowledge that the La Finale is the last Veyron ever produced, means that it’ll be one of the most sought-after vehicles for a few years.

However, while the motoring world mourned the Veyron, just a few feet from the place where the last one was shown publicly for the last time, the future unfolded. Koenigsegg revealed their newest car, their baby, which gave us a glimpse of the transmission-less motoring world of tomorrow. The Regera was born. While some models will rest in peace, others are just beginning to live. 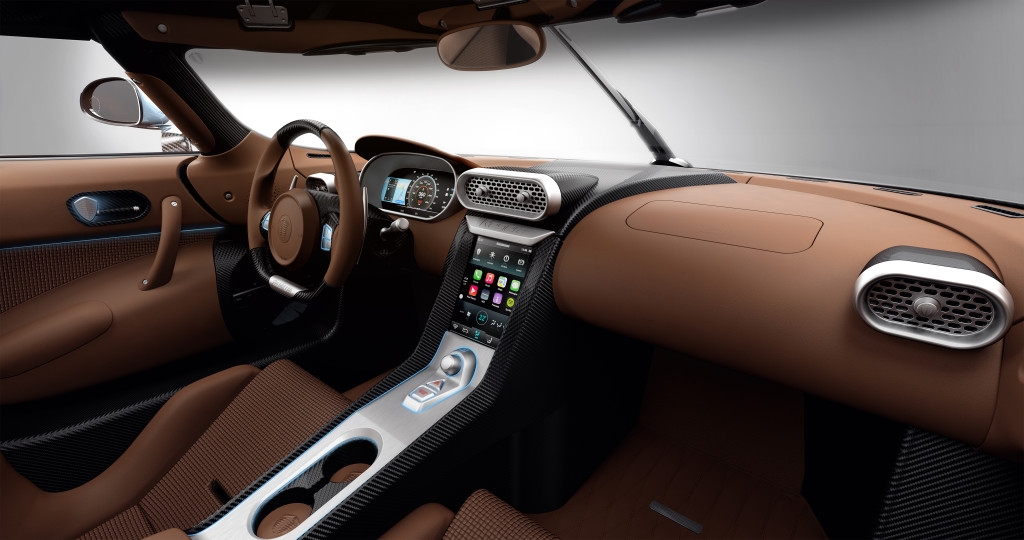 Christian von Koenigsegg is a well-known Swedish car enthusiast who turned his enthusiasm to good use and created a company that produces astonishing supercars that only a few can match. In the last few years, Koenigsegg released a few very important cars (the Agera R and the One:1), but the new Regera just might be the most impressive effort ever made by Christian.

A few years back, von Koenigsegg said that he would never make hybrid cars. Apart from hating them, he thought the technology involved was just too complicated for mass production. However, not only has he produced one, but he has made it much, much simpler than before.

By removing the transmission and integrating three separate electric motors (in addition to a petrol engine), von Koenigsegg has created a transmission-less car with a five-liter engine that is directly connected to the rear differential (basically, the only gear system on the car) by a hydraulic coupling. Koenigsegg calls this system the KDD (Koenigsegg Direct Drive), and the theory behind it is rather straightforward.

The batteries for the car are located between the passengers, and they feed the electric motors. Interestingly, each of the four engines is located behind the driver or passenger; however their arrangement and use enable the car to have such extraordinary and unconventional push. The least powerful electric engine (215 HP) is connected directly to the crankshaft of the five-liter motor. Apart from providing power directly to the crankshaft, this motor also acts as a starter. Behind the 215 HP electric engine and 1,100 HP petrol engine rests the hydraulic coupling connected directly to the crankshaft on one side and to the rear differential on the other side. Simply by controlling the flow of the fluids in the hydraulic coupling, the speed of the car and the power transferred to the rear differential can be controlled. Von Koenigsegg calculated that the hydraulic coupling can be locked when the car reaches the speed of 30 mph (or just over 1,000 rpm), which means that the power transferred to the wheels is basically everything the engine can give at that rpm level.

Before the hydraulic coupling locks, two electric motors (each with 240 HP of power) set directly on the shafts of the rear wheels are managing the initial acceleration (while the coupling is still unlocked). When the car reaches 30 mph, the coupling locks, and then all the power provided by the front electric motor and petrol engine is sent directly to the wheels. This way, Koenigsegg bypassed the transmission, and it has made a very effective hybrid system in which the petrol engine can reach its maximum rpms of 8,250 only when traveling at its top speed of 249 mph.

The benefit of this system is the loss of transmission, lower energy losses and fewer power transfers from mechanical to electrical energy, and vice versa. Also, the system weighs less than any other conventionally engineered hybrid system.

Now, reading through the stories about Koenigseggs, you might find a lot of engines with a lot of power, and believe it or not, power from every engine can be added up. So the Koenigsegg Regera is basically powered by a clever propulsion system good for much more than 1,500 HP (some say up to 1,700 HP). When you forget about all of this technical mumbo jumbo, the thing that really matters is that the Regera is able to accelerate to 62 mph in 2.8 seconds and to reach a maximum speed of 249 mph. This isn’t as impressive as the Bugatti Veyron, but then again, with a change of ratios in the differential, Koenigsegg is able to make the Regera go as fast as desired; as this supercar has the needed power, we are certain that it can reach speeds higher than the Veyron ever could.

At the end of the day, the Koenigsegg Regera and the Bugatti Veyron are very impressive cars. And while we have to say farewell to one, the other is waiting for us. Koenigsegg said that they’ll produce around 80 Regeras, and it just may be that the propulsion concept used here could eventually spread to other cars all over the world. The question is, will the hybrids be on the market long enough for that to happen, or will they just cease to exist when we all start to drive electrically powered cars?

Bugatti Veyron is and will be the boss of super cars for a long time,big ups!