Top Posts
Western Banks Willing to Accept the Short-Term Pain of Russian...
Why the US Is Ramping Up Its Presence in Somalia...
How Technology Is Helping to Solve Global Supply-Chain Issues
UK Inflation Climbs to Fresh 40-Year High
Extended Reality and the Metaverse Are Leading Financial Services into...
Digital Currency: India’s Move Towards a Digital Financial System
Home Life Arts & Travel Two of the World’s Most Wanted—Aston Martin Lagonda and Mercedes-Maybach S-Class
Life Arts & Travel 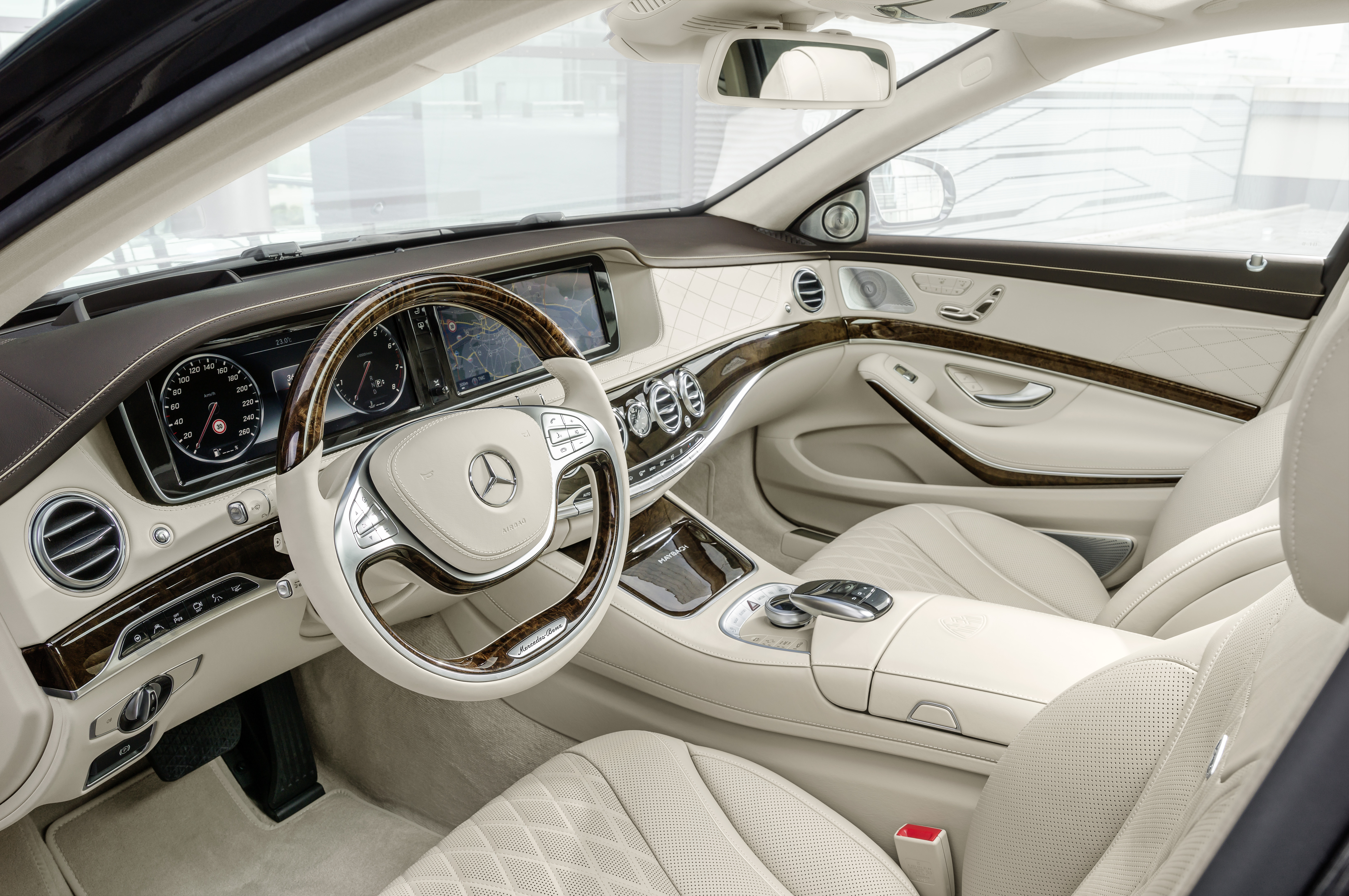 A full length view of the new beautiful Lagonda

The recovery of the luxury-car market is going rather well. Actually, one might say that the recovery process has ended and that the market for large luxury cruisers has grown bigger and more impressive than ever before. The reason behind this is quite obvious. First, even small companies can produce and sell luxurious vehicles. Bentley is making a new SUV Bentayga, and the likes of Porsche, Ferrari, Lamborghini and McLaren are selling more cars than ever. We will not look at sports cars now but large, luxurious cruisers. One—the 2015 Mercedes-Maybach S-Class—has already been revealed, and another—the Aston Martin Lagonda—has somehow remained in the dark, although it has been unveiled to some very rich people.

In November of last year, at a special event in Dubai, Aston Martin officially revealed the new Lagonda Taraf. Shown to a very special group of people, the new Lagonda represents one of the most amazing efforts in the automotive industry in the last 30 years. This is a car that has been made, according to some official Aston Martin statements, specifically for the Middle East and for the customers there who do not want anything short of exceptional.

The full interior of the Lagonda

For years, Aston Martin was coy and short on any details about this magnificent car, but when the first test commenced in Oman, followed by the unveiling event in Dubai, the Lagonda (which is called the Lagonda Taraf in Dubai) became one of the most sought-after vehicles in the world. Interestingly, in another part of the world—in Germany—Mercedes was unveiling their newest baby, the Mercedes-Maybach S-Class. Both of these vehicles are aimed at special customers who have very refined tastes and equally deep pockets. You’ve guessed it. Sheikhs will drive (or be driven) in these machines, and the luxury features in them will surpass anything you’ve ever imagined.

The Lagonda Taraf is built on the known Aston Martin VH architecture, used by the Rapide as well. Flexible architecture enabled Aston Martin to make the modern Lagonda longer, wider, roomier and different looking in comparison with the Rapide, and that, in turn, resulted in a car so beautifully crafted and styled, it is hard not to closely compare it to the famous Lagonda from the 1970s. This new car is equally impressive and as elusive as the one from 40 years ago.

The interior is, of course, made perfect for four occupants. In the front, the driver will indulge himself with a wonderful 5.9-liter V12 engine that we know from the Rapide S (550 HP), while those riding in the back will be in charge of testing the magnificent seat that looks like armchairs taken from a show that hosts future luxurious designs. Unfortunately, we do not know what kind of entertainment technology is available for the occupants, but it is obvious that Aston Martin used the best it could to make this car as exclusive (and elusive) as possible.

The car will be available for purchase only with a special invitation from Aston Martin. That means that in order for anyone to buy this piece of craftsmanship, he/she has to be chosen by Aston Martin officials. Even though this seems a bit too much, this is the only right way to keep the exclusivity of this car on such a high level that no one, except some very powerful people, will ever get the chance to drive it, or simply to own it. The Aston Martin Lagonda Taraf will be built in Gaydon, UK, in the same factory where the mighty One-77 has been produced. Aston Martin has highly trained craftsmen and craftswomen there who are responsible for making the best Aston Martin cars ever produced. Interestingly, Aston Martin did everything in its power to make the Lagonda as light as possible. Every exterior panel has been made out of carbon-fiber elements, but we doubt that they’ve succeeded in bringing the weight down considerably. This is a large vehicle, after all, and it is filled with all sorts of materials that made it quiet enough for the sensitive sheikh ears and comfortable enough for their bodies, tired after days of work.

All in all, Lagonda is one name from history that defied the odds and came back to the market. 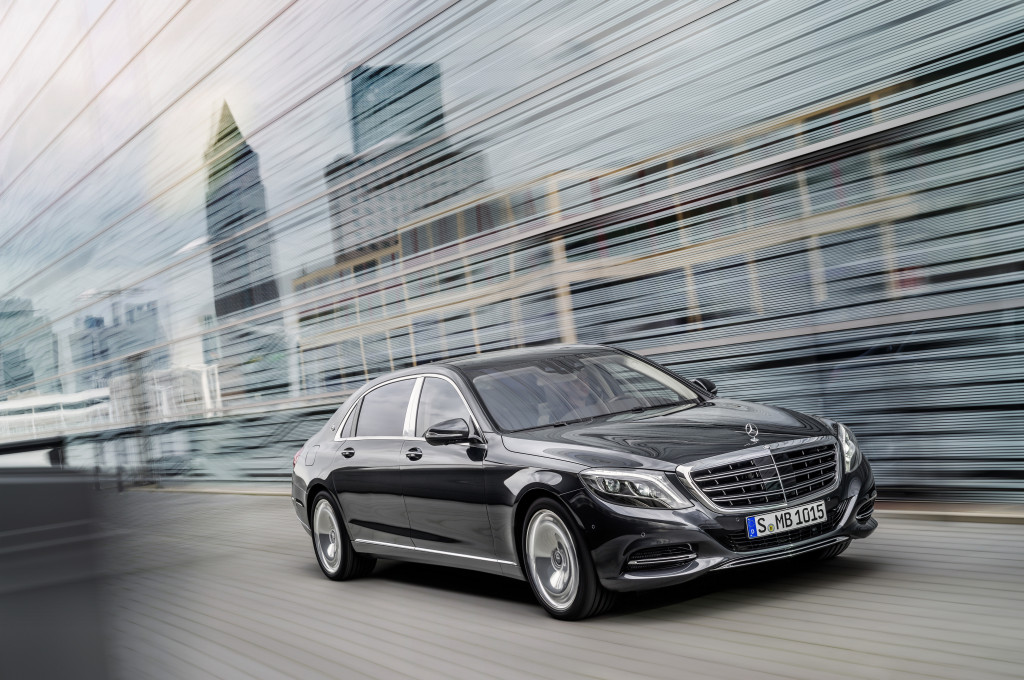 The other luxurious cruiser that went six feet under but soon climbed its way back up to the stars is Maybach; its name is now included in the new Mercedes-Maybach S-Class.

We have to reconcile these two vehicles. Both of them are aimed at a specific market niche dominated by the very rich and wealthy individuals who will buy them to enjoy them and to cherish them in the years to come. Unlike the Aston Martin Lagonda, the Mercedes Benz Maybach S-Class is an executive saloon that wears the name of luxurious vehicles produced in the first decade of the 21st century (and part of the 20th century). Mercedes revived the name Maybach this way because it was impossible to make the brand profitable by itself. The S-Class, specially developed to revive the brand Maybach, is more than you could ever ask for. It is a few inches longer in comparison to the stock S-Class. Also, the car has a larger wheelbase, which provides more than enough room at the back for those notorious Maybach-styled seats that can be operated any way you can think of (and yes, they massage, too).

It seems as if Daimler made a whole new brand with the Mercedes-Maybach, and this S-Class is their first in that brand (what a start). So, what is so different about this S-Class in comparison to the other S-Class vehicles that Mercedes produces? 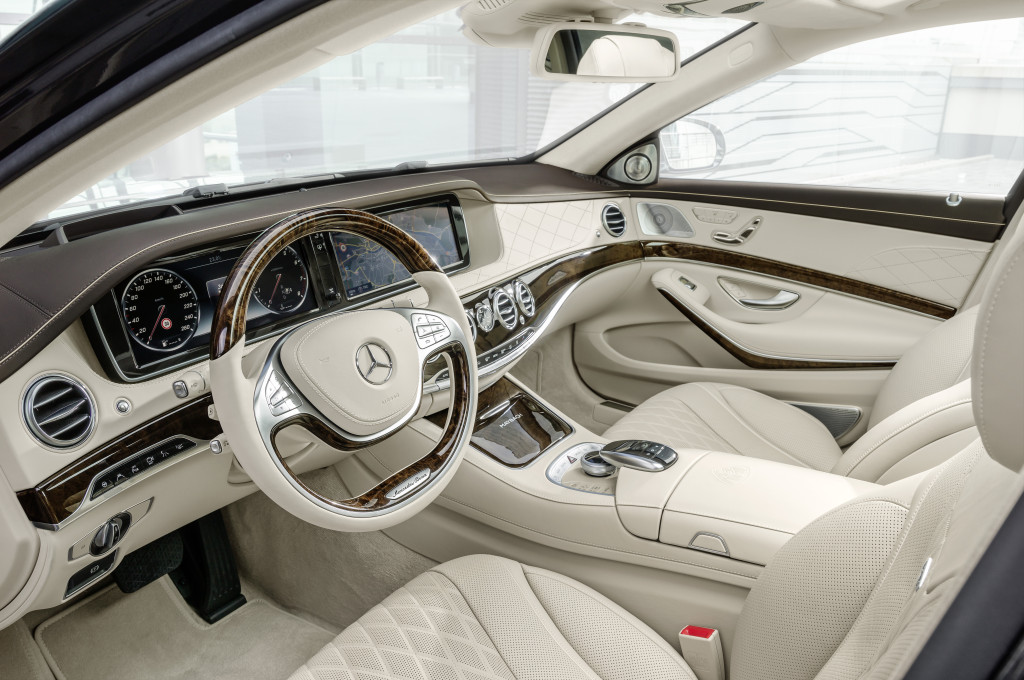 A look at the driver’s cabin of the Maybach

First of all, the Mercedes-Maybach S-Class is the world’s quietest car. It has insulation so thick that the engine sound and the sound from the exterior are altogether expelled from the cabin. This is on par with the aristocratic character of the machine. Even though the car wears the name of the Maybach, and the interior is decorated with the best possible leather, wood and brushed aluminium, the exterior seems rather familiar. Everything is much the same as on the existing Mercedes S-Class. The only obvious change is the lack of triangular windows on the back doors, which are also shorter in comparison to the doors on the longer-wheelbased S-Class. More importantly, the wheels are brought over from those legendary Maybach cars from the past, and that really is a nice touch. Now, the technology under that nicely crafted exterior walks a thin line between science fiction and reality. Comfort and luxury have been upped by installing top-notch tech such as cooled and heated seats along with the best entertainment system ever envisioned in a car. Everything is executed with the best quality there is in the car world, which means that the Maybach S-Class is in the same league as the likes of Rolls-Royce and Bentley. That is really what the Germans wanted, and that is why we can compare the two cars that on first sight do not have much in common.

The commonalities between the Lagonda Taraf and the Maybach S-Class are staggering. Basically the same people will buy them, they will cost much the same, and both of them are the best in the world in their own segments. One of them will be the most exclusive in the world, while the other is the quietest ride that ever was (yes, it is quieter than any electric car you can think of). The latter is, of course, large and heavy, and it needs some real power under the hood. That is why Daimler introduced the S600, which will be the first one available. Imagine a V12 engine with twin-turbocharger developing impressive 530 HP. This is not the most powerful saloon in the world, but it is powerful. This engine is the one that anyone should opt for if he or she has enough money for this beast. It provides the large luxury cruiser with performance almost unmatched even by the most powerful and most amazing German limousines. Besides the S600, Mercedes offers the S500 powered by a twin-turbo V8 engine that develops 455 HP. It is a great machine, but c’mon, if you want the best then take the best there is.

All this power, however, will be at the disposal of a chauffeur who will manage this large machine, while the owner will probably sleep on that backseat. Daimler offers a special chauffeur package, which actually does not have anything to do with the chauffeur. That package brings more foot room for the rear right seat. Convenience technology for the passengers goes so far that Mercedes made a whole new climate system that lets only top-quality air enter the cabin.

Both of these vehicles (the Mercedes-Maybach S-Class and the Aston Martin Lagonda Taraf) represent the top of the car world. The best technology is under their metal, and their exteriors are sculpted in ways that provide the best possible aerodynamic efficiency (0.26 Cd for the S-Class).

The prices match the exclusivity. These cars will be at the top end of the market, and it is safe to assume that they will only rise in value over the years.

The US an Oasis of Prosperity: Will the Fed Be the Only Major Central Bank to Raise Interest Rates in 2015?

Coast to Coast: Why a Luxury African Vacation Should Be on Everyone’s Bucket List