Top Posts
PSD2: A Payments Industry Revolution?
Germany on the Brink of Recession as Russia Prolongs Gas-Supply...
Is It Time to Return to Bond Funds Again?
Ecuador Protests Pitted Lasso Government against Indigenous Peoples amid Soaring...
Tesla Job Cuts Reflect Precarious Health of Global Economy
Artificial Intelligence is the Future of the Banking Industry —...
Home News Drought Pushes Tens of Millions into Severe Hunger in the Horn of Africa
News 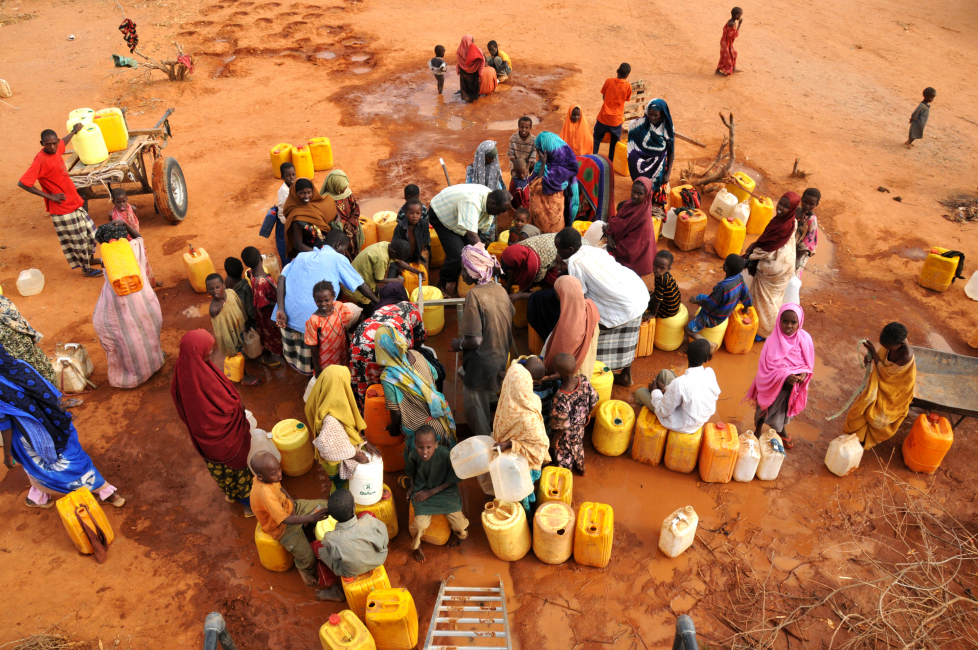 Up to 20 million people are expected to go hungry this year as the Horn of Africa’s worst drought in decades continues to decimate the region’s agricultural capacity. Food insecurity—that is, the lack of consistent access to sufficient food for a normal, healthy life—and malnutrition have risen dramatically this year across Kenya, Ethiopia and Somalia, with more than 15 million people already affected. “Globally, we are facing a year of unprecedented needs as conflict, climate shocks and the rising costs of food and fuel leave millions in need of humanitarian assistance,” warned Michael Dunford, World Food Programme (WFP) regional director for East Africa.

The region has already experienced three consecutively underwhelming rainy seasons; the October-December 2020, March-May 2021 and October-December 2021 seasons all suffered from well below-average rainfall. And with the La Niña weather phenomenon once again turning this year’s April—normally one of the year’s wettest months—into another disappointing month for rain, a fourth discouraging season has followed in their footsteps. As such, massive areas within southern Ethiopia, most of Somalia and northern Kenya face drought conditions that some have described as amounting to a once-in-a-generation crisis. Indeed, with this March-May rainy season failing, it is the first time in 40 years that the Horn of Africa has experienced four consecutive below-average seasons, with the region now being hit with the most intense drought since at least 1981.

The impact of this crisis on local populations thus far has been nothing short of devastating. The resultant water shortages have caused widespread crop failures, while insufficient access to pasture, water and fodder has ravaged livestock numbers and thus greatly damaged people’s prospects of selling off animals to cope with the severe conditions. And according to the World Food Programme (WFP), the number of people pushed into hunger because of the Horn’s drought could rise from current estimates of 14 million to 20 million by the end of the year—approximately half of whom are estimated to be children. “Across the Horn of Africa, we are seeing how children are bearing the brunt of the drought. The situation of children with severe wasting is urgent and getting worse,” Mohammed M. Malick Fall, UNICEF (United Nations Children’s Fund) regional director for Eastern and Southern Africa, said in late May. “Even as we respond to the humanitarian emergency, it is the right time to invest in local solutions and long-term resilience.”

In Somalia, the WFP sees an elevated risk of famine, with families struggling to survive, while half a million Kenyans are close to “catastrophic levels of hunger”, and malnutrition rates in Ethiopia are now well above emergency thresholds. “Farmers have watched their crops shrivel up, wilt and die due to lack of rain… harvests are up to 70 percent below the norm in affected areas,” WFP spokesperson Tomson Phiri observed in mid-April. “Food and water prices are skyrocketing, significantly curbing families’ access to nutritious food. Cereal prices have risen three to fivefold above typical levels in several markets, coupled with a decline in livestock. The amount of cereal that could be purchased with the sale of a goat has dropped in some cases by up to 40 percent below the five-year average in Kenya, and by over 80 percent in parts of Somalia.”

Estimates also suggest that one million livestock have already died due to the drought, the majority of which have been in the Somali region. “Dead animals by the roadside are a common sight—they have not been hit by passing vehicles, but rather died in large numbers from thirst and starvation,” Phiri added. The president of the Somali Region, Mustafa Muhumed Omar, has described it as the worst drought in 40 years. “It is estimated that one million head of cattle have died. Livestock across the region are in poor health, and many more are expected to die from the increase of the disease. Vaccination and feed campaigns are urgently needed to save the reproductive nucleus.”

To compound matters further, food prices have been rising across the world in international markets largely as a result of the war in Ukraine, as well as locally due to the drought, which has severely crippled harvests. According to the UN Office for the Coordination of Humanitarian Affairs (OCHA), the cost of a food basket had risen by 66 percent in Ethiopia and by 36 percent in Somalia by late April, which had rendered families incapable of purchasing even basic items and forced them to sell many of their assets in exchange for food and other life-saving items. The OCHA also observed a mammoth 72-percent rise in water prices in the worst affected areas of Somalia since November 2021.

Indeed, the OCHA has observed that millions of people in the Horn have been facing “dire water shortages” as many water points have dried up or diminished in quality. This has magnified the risk of water-borne diseases and skin and eye infections, as families have been forced to prioritise their limited water usage to drinking and cooking over their hygiene needs. “The risks faced by women and girls—including gender-based violence and death during childbirth—have risen sharply since the drought began,” the OCHA added, noting that families are having to resort to increasingly desperate measures to survive, with thousands leaving their homes in search of food, water and pasture.

But perhaps most deflating of all is the lack of funding being provided by the global community to date to mitigate this disaster. “The threat of large-scale loss of life is rising each day, and more funding is immediately required to enable humanitarian partners to respond at-scale to this once-in-a-generation crisis,” according to the OCHA. But despite an appeal by WFP for funds in February to address Somalia’s growing famine risk, not even 4 percent of what was needed had been raised by May. “Over the next six months, WFP needs US$473 million to scale up assistance and save lives across the three countries—Ethiopia, Kenya and Somalia,” the WFP declared in April. “We know from past experience that acting early to avert a humanitarian catastrophe is vital, yet our ability to launch the response has been limited due to a lack of funding to date,” Dunford said on April 19. “WFP and other humanitarian agencies have been warning the international community since last year that this drought could be disastrous if we didn’t act immediately, but funding has failed to materialize at the scale required.”

The United States has since responded by announcing an additional $200 million in humanitarian assistance for the Horn of Africa that specifically addresses the needs of refugees, internally displaced persons and people affected by conflict in the region. This brings the total US humanitarian assistance to the region from the beginning of Fiscal Year 2022 to $361 million. China also confirmed in late February that it would provide emergency food aid to Somalia, Eritrea, Ethiopia and Djibouti. And the European Union (EU) announced a total of €348 million in funding for this year to boost food security in the Horn of Africa following roundtable discussions between the European Commission (EC) and the OCHA. Funding includes humanitarian assistance and longer-term support to tackle the root causes of food insecurity, including climate adaptation and mitigation measures.

“The humanitarian consequences of the historical drought affecting the Horn of Africa in countries like Somalia, Kenya and Ethiopia are dramatic. Millions of people are already affected by the drought and need life-saving assistance. In addition, the dependency on Ukrainian and Russian imports already adversely impacts food availability and affordability in this region,” according to the European commissioner for crisis management, Janez Lenarčič. “The time to act is now. The international community, humanitarian and development partners, national authorities and communities must save as many lives as possible and work together in a sustained effort to address the emergency and build future resilience.”

In the WFP’s early-May analysis of the region, the onset of rains has allowed for some crop planting to start, including in parts of Somalia, although seasonal harvests might be affected by the reduced areas planted, insufficient moisture and other socio-economic factors, leading to a consecutive season with below-average harvests. But as the OCHA noted on June 10, the latest long-lead seasonal forecasts, supported by a broad consensus from meteorological experts, indicate that there is now a concrete risk that the October-December 2022 rainy season could also fail. There is no time to waste. “Immediate action is required to prevent the worst from transpiring in the months ahead.”