Top Posts
Challenges Remain, But There Are Opportunities to Be Had in...
Interview with Mr. Olukayode Pitan, Chief Executive Officer and Managing...
Commodities Outlook for 2023
The Value of Cash in a Time of Crisis: How...
The US-Africa Leaders Summit: Fostering a Closer Relationship with the...
Three Key Sectors in Which to Invest in 2023
Home News Ecuador Protests Pitted Lasso Government against Indigenous Peoples amid Soaring Living Costs
News 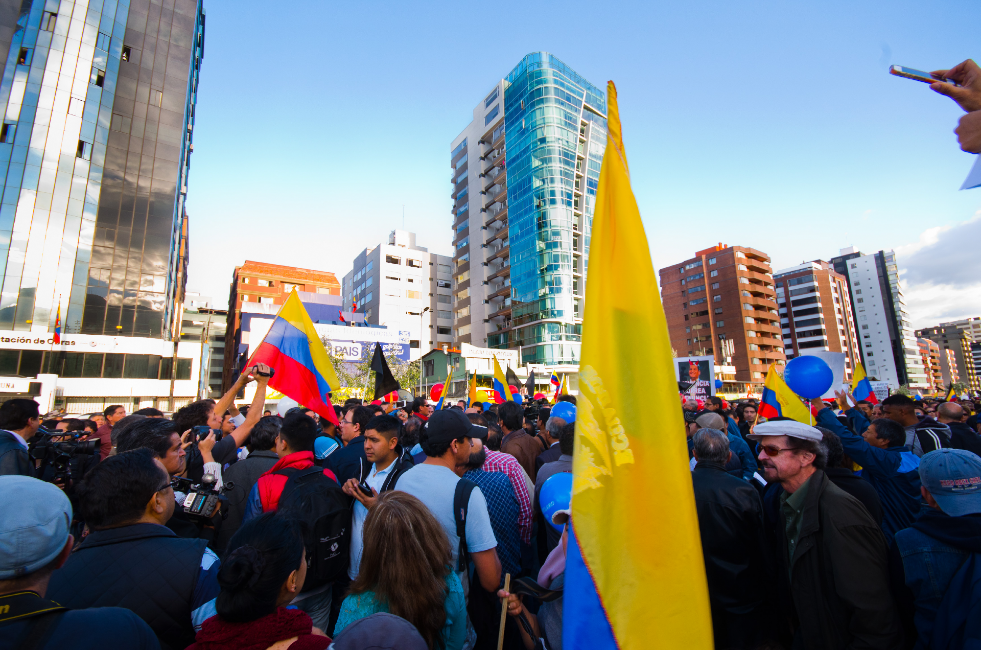 After 18 days of violent protests across much of Ecuador, an agreement was finally reached between the government and the leading indigenous group at the end of June. With this agreement, the country managed to move forward from demonstrations that had reached the boiling point as it, like much of the rest of the world, battles rising inflation. “We have achieved the supreme value to which we all aspire: peace in our country,” President Guillermo Lasso tweeted soon after the agreement was confirmed.

A combination of soaring fuel prices, questionable economic policies enacted by the Lasso government during the pandemic, and a painful rise in living costs were key factors motivating the countrywide demonstrations that kicked off on June 13, when the leading indigenous group, Confederation of Indigenous Nationalities of Ecuador (CONAIE), announced a strike and issued a list of demands to the government. “The people of Ecuador are facing poverty,” Leonidas Iza, the leader of CONAIE, said at the time. “There’s inequality and injustice, and what has awoken in Ecuadoreans is indignation.”

The protesters were mainly indigenous Ecuadorians, trade unionists, and anti-mining activists. “We came here to claim our rights, because the government has done bad. Within one year, everything has increased,” Alfonso Estrella, an indigenous construction worker, explained to Al Jazeera on June 24. “He [President Lasso] offered to work with Indigenous people. But he doesn’t know who Indigenous people are, or what Indigenous people need, because most of us are … in poverty. How much were we getting paid during [former President Raphael] Correa’s time? $170. How much are they paying now? $100 … My family of five people, imagine that. How we are going to survive on this?”

Other protestors spoke of the sharply rising costs that they have been paying for such necessities as fertilizer, gasoline, oil, and food as inflation increases the financial burden on the Ecuadorian people. The cost of diesel has almost doubled since 2020, while gasoline prices have risen substantially this year following the outbreak of war in Ukraine. Protestors thus demanded a 45-cent-per-gallon reduction in the price of fuel such that diesel would be frozen at $1.50 and gasoline at $2.10. There were, in addition, many more demands for help to alleviate the immediate cost-of-living crisis and guarantee a brighter, more stable economic future for Ecuador, including

The diverse nature of these demands seemingly reflected a country that had reached a tipping point. The resulting protests, much larger and longer-lasting than an earlier round in October 2021, seriously tested the ability of Lasso’s right-wing administration to rejuvenate the economy as Ecuador emerges gradually from the COVID-19 crisis.

The violence unleashed on both sides of the political divide also reflects the desperation felt across the country. On June 24, for instance, demonstrators stormed the Egyptian embassy in the capital of Quito as well as the governor’s office in Cotopaxi province, where they appointed a “governor of the people.” Four days later, violence again erupted between protestors and military forces in the province of Sucumbíos that claimed the life of one soldier. The National Assembly even tried to impeach Lasso but fell 12 votes short of the threshold of 92 required to remove him from power. The next day, the president declared a new state of emergency for the provinces of Imbabura, Azuay, Sucumbíos, and Orellana.

By the time the agreement was reached on June 30, the protests had claimed 5 lives, 331 civilians had been injured, and more than 150 protesters had been detained, including, most notably, Iza, who was arrested on June 14, a day after the strikes began, for the alleged crime of paralyzing public services. “No one is above the law. Ecuadorians cannot be victims of vandals who only want to provoke chaos,” Lasso initially said following Iza’s arrest, adding that the police were arresting the “intellectual and material perpetrators” of violent actions. Considerable resentment persists regarding Iza’s arrest, with some reports suggesting that it was carried out illegally and violently. “Such a lie cannot be accepted in an attempt to blame a citizen,” Iza said in an interview with Radio Sonorama. “No matter how much they say about justice, I cannot accept that they have not read me my rights. I was kidnapped by six trucks of military and police in Cotopaxi. My rights were read to me in Pichincha and not where I was detained.”

In the end, however, a compromise was reached, and the protests subsided. The agreement between the government and indigenous leaders saw the prices of both gasoline and diesel lowered by 15 cents, to $2.40 and $1.75 per gallon, respectively, and limits on oil exploration and mining activity, particularly in protected public areas, national parks, and water sources. The agreement also directs the government to deliver concrete solutions in line with protestor demands within 90 days.

“Social peace will only be able to be achieved, hopefully soon, through dialogue with particular attention paid to marginalized communities, but always respecting everyone’s rights,” declared the head of the Episcopal Conference, Monsignor Luis Cabrera, who acted as the mediator for the deal. Cabrera added that “if state policies do not resolve the problem of the poor, then the people will rise up.” Government minister Francisco Jimenez, who also signed the final agreement, added “We know we have a country with a lot of divisions, a lot of problems, with unresolved injustices, with important sectors of the population that are still marginalized.”

These protests in Ecuador have been enormously important for citizens’ efforts to improve their living standards. Similar mass mobilization is occurring worldwide amid increasingly desperate attempts to deal with skyrocketing food and fuel prices. In Latin America, equivalent levels of discontent are being felt in Chile, Peru, and Honduras, with citizens demanding that their governments act to alleviate the financial burden of the rising costs of everyday goods.

Rising food and fuel prices were also pivotal in the recent mass protests recently in Sri Lanka that led to the ouster of President Gotabaya Rajapaksa. In India, where an incredible 250 million farmers staged demonstrations in 2020, protestors are mobilizing once more to protest the shortage of fertilizers. In Europe, farmers’ protests in the Netherlands against the constrictive impact of new emissions rules inspired farmers in Germany, Italy, Spain, and Poland to take to the streets.

Such protests demonstrate the extent to which global economic instability can impact ordinary citizens. Governments must take note of the discontent and adjust their policies accordingly or face further unrest.