Top Posts
Digital-Banking Development Is Essential for Boosting Financial Inclusion in ASEAN
Gold Buying Once Again on the Agenda for Central Banks
Does Foreign Monetary Policy Drive Australian Banks’ Wholesale Funding Costs?
It’s Time to Equip SMES With the Banking Services They...
Assessing the Role of Development Finance in the Growth Process
Global Economic Turmoil Raises Concerns Over Bursting of the Tech...
Home News The Implications of the Petro-Márquez Election Victory in Colombia
News

The Implications of the Petro-Márquez Election Victory in Colombia 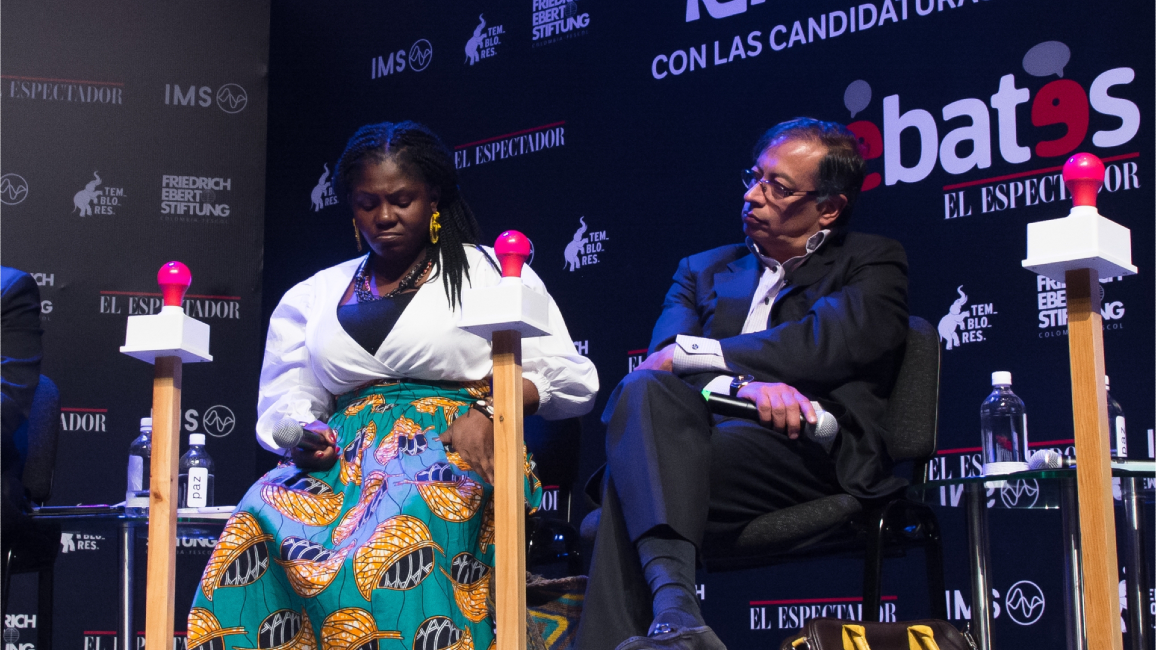 In a historic election win on June 19, Gustavo Petro swept to victory as Colombia’s first left-wing president alongside the charismatic vice-presidential candidate Francia Márquez. Having won the first round at the polls on May 30, Petro then went on to beat a far-right opponent, Rodolfo Hernández, in the second round three weeks later with 50.4% of the vote.

Historically, Colombia has been ruled by a procession of centre- to far-right administrations, invariably backed by the United States. Having watched as much of the rest of Latin America has moved left in recent years, however, the Colombian people switched course to embrace the policies of the Pacto Histórico (Historic Pact), the coalition created to support Petro’s campaign. The coalition includes a broad cross-section of political parties and social movements ranging from the Communist Party on the far left to Todos Somos Colombia and Fuerza Ciudadana on the centre-left.

Petro has an illustrious background. Joining a pro-democracy guerrilla organisation, the 19th of April Movement (or M-19) when he was only 17 years old, he later spent 18 months in prison for illegal arms possession. Petro entered Colombian politics when the M-19 Democratic Alliance that evolved from the M-19 movement won several seats in the Chamber of Representatives in 1991. In 2002, he was elected to the Chamber of Representatives for the capital of Bogota as a member of Vía Alterna, another offshoot of M-19, and to the Senate in 2006. Six years later, Petro became the mayor of Bogota.

Vice President Márquez, who belongs to the historically underrepresented Afro-Colombian community, is an environmental activist whose opposition to gold mining activities in her home municipality of Suarez in the province of Cauca earned her the prestigious Goldman Environmental Prize in 2018. Her activism has also elicited countless death threats from militant groups, which forced her to leave her home village. “After 214 years, we have achieved a government of the people, a popular government, a government of people with calloused hands . . . of the nobodies of Colombia,” Márquez said of the election victory.

The Petro-Márquez administration certainly has strong leftist credentials on paper, then, but it remains unclear whether it can deliver on the promises made during the campaign after taking office in August. The new president is certain to be opposition from Colombia’s legislature, both chambers of which remain dominated by right-wing parties.

Petro has committed to honouring the peace deal reached by the government in 2016 with the Revolutionary Armed Forces of Colombia (FARC) rebel group, which the outgoing administration of President Ivan Duque repeatedly violated. Indeed, an estimated 1,200 human rights activists have been killed in Colombia since the deal went into effect, nearly 150 of them in 2021 and over 100 so far this year. Accordingly, re-establishing the conditions of the peace treaty and ensuring that activists are protected from further violence will be high on Petro’s agenda. He also plans to initiate détente with the country’s other major left-wing armed rebel group, the National Liberation Army (ELN).

On the economic front, much of Petro’s immediate focus will undoubtedly be on alleviating the short-term macroeconomic pain that the country is currently suffering. Most analysts estimate the gross domestic product (GDP) to grow around 7 percent this year, but with inflation remaining well above 9%, the annual real GDP is actually falling. “Inflation remains at unusually high levels, determining an acceleration of the process of interest rate hikes and an expectation of lower growth in Colombia’s main trading partners. With this, global price increases are expected to be lower in 2023,” the Spanish bank BBVA predicted in its outlook for the country issued on July 14. “Inflationary shocks in Colombia have proven to be stronger and more persistent. Inflation will remain high this year, closing at 9.2%, and gradually moderating in 2023 to 5.0%.”

Perhaps the most notable component of Petro’s economic agenda is his pledge to address the inequality that pervades Colombian society following decades of neoliberal economic policies. The incoming president has stated his desire to raise taxes on the wealthiest Colombians through a levy on the “unproductive wealth” in the hands of the richest 0.01% of the population. “In a highly unequal and economically stunted country, the country’s 4,000 greatest fortunes could be taxed” while keeping the rate on salaries steady, Petro suggested during a debate among presidential candidates in November 2021.

The proceeds of such a policy would then support efforts to expand the public sector and reduce the country’s fiscal deficit, which is a hefty 7.1 percent of GDP thanks in no small part to the low-tax regime that Duque implemented. There has also been interest in a proposal to tax dividend payments at the same rate as salaries—currently, the maximum marginal rate is 39%—rather than at the current rate of 10%.

The plans for reform also include paring back the tax benefits that the outgoing government awarded to politically-connected firms and sectors to create a business environment that will attract more foreign investment. “The clear message that we want to send is that foreign investment is welcome,” the incoming head of the tax agency, Carlos Reyes, recently explained to Bloomberg, adding that, after the elimination of the tax breaks, companies could end up enjoying lower tax rates. “We are going to seek to create stable conditions that make investing in the country attractive.”

Another notable aspect of the Petro-Márquez campaign was a strong emphasis on social justice issues, particularly gender equality, environmental protection, and the rights of indigenous Colombians. “Under the Duque government, environmental and climate protection in Colombia were largely neglected, deforestation increased, and the first fracking pilot wells were approved. Petro and Márquez have announced fundamental change,” concluded Oliver Dalichau, who heads the Colombian office of Friedrich-Ebert-Stiftung, a foundation associated with Germany’s Social Democratic Party. “They are focusing on a more environmentally-friendly production and service model and are proposing an energy transition that will rule out new development of future oil fields. This process is to be accompanied by a land reform of unproductive lands—mostly resulting from illegal forest clearance.”

Petro and Márquez have also denounced violence against women by armed groups, another persistent problem in Colombia in recent years, pledging protection for the vulnerable and the enactment of land reform policies to expand access to property ownership. “This is the first presidential campaign that has a platform—known as a feminist platform—that tries to put women’s issues at its core,” Gimena Sanchez, Colombia Director at the Washington Office on Latin America, told Al-Jazeera soon after the election victory. Petro’s commitment to warmer relations with neighbouring Venezuela will also help women along the border between the two nations “where multiple illegal groups are operating rampantly,” Sanchez added.

However, while Colombia’s relationship with Venezuela may soon experience a thaw, a chillier relationship with the United States may be on the horizon. Indeed, the US response to Petro’s election victory suggests that the traditional friendship between the two countries may fray. Márquez has already called out the apparently unfounded allegations of Russian, Venezuelan, and Cuban meddling in the elections by the US ambassador to Colombia. “Although he [the ambassador] did not mention the Pacto Histórico, although he did not mention Gustavo Petro, it is obvious that he was referring to our candidacy and our political campaign,” Márquez complained at an event in Washington DC. “I think they keep silent on certain things, but they speak out and publish statements on others, and I think that is not an impartial attitude. I think that that is a very negative message for Colombian democracy.”

The fairly muted response by the US government thus far to Colombia’s shift to the left perhaps signals displeasure at this turn of events. A few US right-wing figures, though, took advantage of the opportunity to air their talking points. “The election in Colombia of a former narco-terrorist Marxist is troubling and disappointing,” tweeted Ron DeSantis, the Republican governor of the State of Florida, a day after Petro’s victory. “The spread of left-wing totalitarian ideology in the Western Hemisphere is a growing threat. Florida stands with Colombian Americans on the side of freedom.”

The Best Ways to Invest in the Food Sector

Digital-Banking Development Is Essential for Boosting...

Gold Buying Once Again on the...