Top Posts
Interview with Mr. Olukayode Pitan, Chief Executive Officer and Managing...
Commodities Outlook for 2023
The Value of Cash in a Time of Crisis: How...
The US-Africa Leaders Summit: Fostering a Closer Relationship with the...
Three Key Sectors in Which to Invest in 2023
Three Key Stocks in Which to Invest in 2023
Home Slider Banks vs Fintechs: the War for Talent
Technology 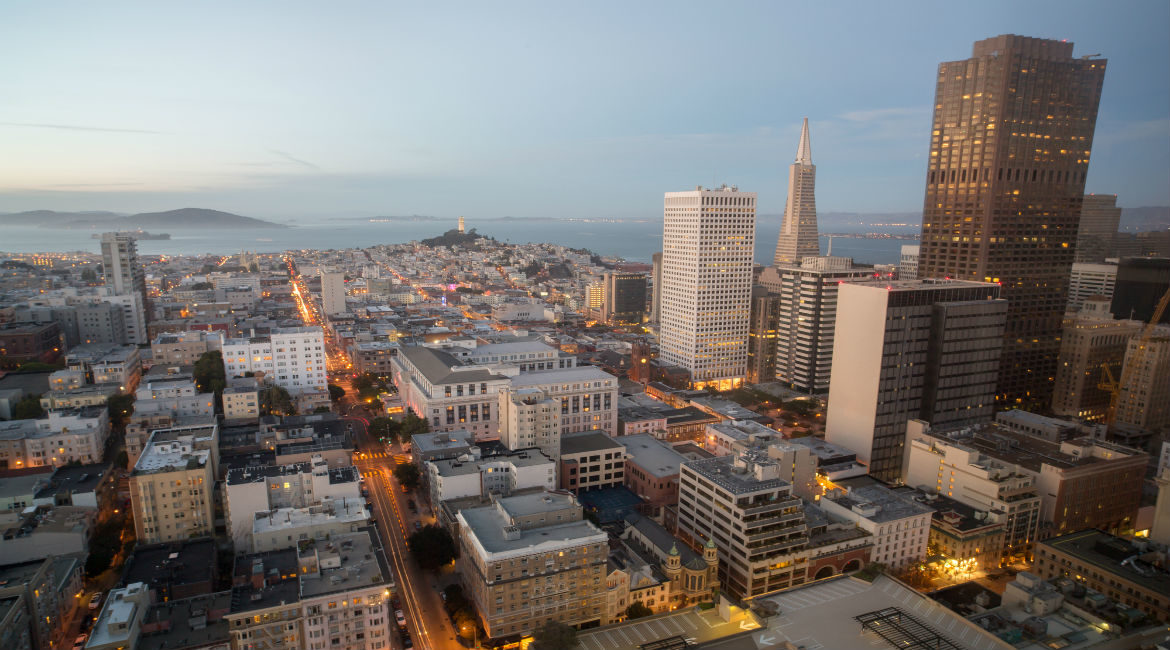 Competition or collaboration? It seems to be among the most important decisions banks face these days as they continue to deal with the boom in global fintech. But when it comes to attracting talent, the banking sector is unequivocally in the midst of a no-holds-barred scrap with tech start-ups.

Some of the world’s biggest lenders are currently spending billions to set up research facilities, innovation labs and incubators as they develop close working partnerships with fintech companies. But at the same time, it is no secret that fintech’s unprecedented expansion over the last decade is now posing a serious challenge to the banking sector’s primacy. And given that tech skills are now a hot—and scarce—commodity, both banking and fintech are doing their best to acquire those skills ahead of each other.

Many of these start-ups, moreover, are equipped with enough cash to be able to compete with their banking counterparts on salaries. According to assessments by recruitment site Glassdoor, for example, a London-based software engineer at online lender Funding Circle will earn a base salary of £51,000 on average, which is equal to the salary paid at Goldman Sachs for a similar role. At UBS, that figure is £59,000, while at challenger Monzo Bank it is currently £64,000. Speaking recently to Bloomberg, co-founder and CEO of property lending platform LendInvest, Christian Faes, asserted that between 30 and 40 percent of the company’s hires are from major financial institutions, while banks also account for 100 percent of its small-risk and compliance team. Similar trends are also being reported by UK online lender MarketInvoice Ltd., where three-quarters of its 85 employees have come from either the financial-services or accountancy space.

Moreover, this trend is not exactly emerging at the best time for banks as far as overall headcount is concerned. Research from Citigroup published in 2016 suggests that the US and European banking industries will experience a precipitous decline in the overall number of employees, in part as a result of fintechs seeking to disrupt banking processes all the way from the front-end to the back-end. Citi’s in-depth report “Digital Disruption” sees the headcount dropping in the United States from 2.57 million in 2015 to 1.8 million by 2025, and in Europe from 2.89 million to 1.82 million: 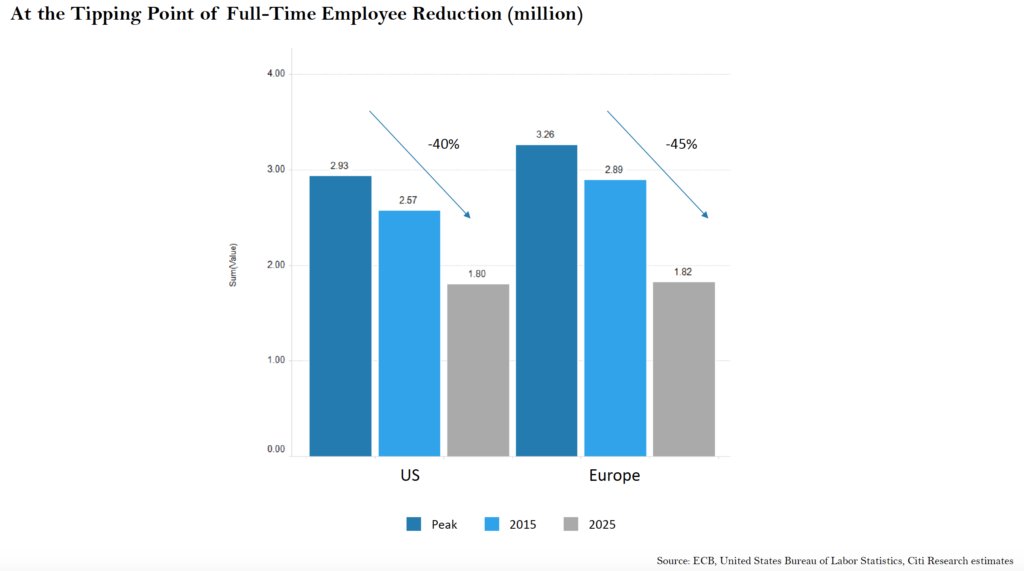 Since the release of the report, Citi has continued to support its findings. Last September, the bank’s former CEO Vikram Pandit forecast that technology advancements could be responsible for 30 percent of jobs in banking being shed over the next five years. He observes the heightened competition within the banking industry in recent times, and expects that “specialist providers” will emerge, in addition to further consolidation in the industry: “I see a banking world going from large financial institutions to one that’s a little bit more decentralized”.

Given such competition, it appears that banks are now actively trying to ensure its top tech talent does not leave for the enticing world of digital start-ups. Much evidence has emerged over the last year or so of many of the world’s biggest lenders offering more flexible terms to senior staff in a bid to prevent such defection. For instance, JPMorgan Chase’s innovation programme, which was initially set up to target outside talent, has shifted its focus to tech-minded staff already employed within the bank. Such employees are now being given the license to embark on their own fintech ventures under the JPMorgan Chase name; should a new product or service prove useful to the bank, then it will be given the green light to continue development, while the employees themselves could end up becoming chief executives of such ventures. As such, employees are given entrepreneurial freedom to explore, whilst helping to expand the scope of the bank. Indeed, according to Oliver Harris, head of JPMorgan’s In-Residence programme, JPMorgan itself will often be the new project’s first customer.

More banks are beginning to do the same. UBS employees who receive backing from at least one member of the Swiss bank’s “innovation board”, for example, can potentially apply to the board to proceed with the development of an innovative idea; and upon approval, the employee can begin working on the project. And reports have also surfaced that BNP Paribas will offer similar opportunities for its employees, whereby the bank will provide support for the development of approved projects and possibly even invest in such projects.

Other banks, meanwhile, are looking to restructure their workforces, mostly by boosting the proportions of their tech divisions. The National Australia Bank (NAB), for example, announced in November that it was creating 600 new tech jobs to compete with fintechs, specifically in software engineering, data, architecture and security. Perhaps the most noteworthy aspect of the move is that NAB aims to cut 2,000 jobs elsewhere within the bank by 2020, underlining just how seriously it is taking its efforts to up its tech acumen and prevent digital start-ups from stealing scarce skills from under their noses. As the bank’s CTO, Patrick Wright, admitted, “We know this is an ambitious target and acknowledge the war for talent is intense, but these are the essential skills and roles we need in order to deliver our plan.”

Indeed, reports are now emerging suggesting that headhunting by banks is on the rise again after several years of stagnation. This time, however, the ideal skillset being sought is significantly more tech-oriented. Speaking to CNBC in December, managing director of search firm Kerry Consulting, Declan O’Sullivan, observed that banks are now on the lookout for digital strategists, fintech professionals, data managers and cyber-security specialists. The question that remains, however, is whether they can ultimately acquire those professionals, or whether the lure of the burgeoning fintech scene is now too attractive to turn down.

NAB has made clear just how dangerous the threat from fintechs is with regards to competing for tech skills. Anne Bennett, the bank’s executive general manager for business transformation, acknowledged this recently at an industry event, “As the World Bank noted, the largest movie house owns no cinemas, the world’s largest taxi company owns no taxis, and increasingly, large phone companies own no telco infrastructure. What then is the future asset for banks? It’s experience.” As such, CTO Patrick Wright is now aiming to rebalance NAB’s workforce to better compete with such threats from disruptive start-ups: “We understand what the fintechs across the world are doing—and we think we can do better. But we need to move now, invest in the right systems and people, and change dramatically”.