Top Posts
How Gamification is Catapulting Digital Banking to the Next Level
Challenges Remain, But There Are Opportunities to Be Had in...
Interview with Mr. Olukayode Pitan, Chief Executive Officer and Managing...
Commodities Outlook for 2023
The Value of Cash in a Time of Crisis: How...
The US-Africa Leaders Summit: Fostering a Closer Relationship with the...
Home Slider Can Smart Cities Fulfil Their Potential?
Technology

Can Smart Cities Fulfil Their Potential? 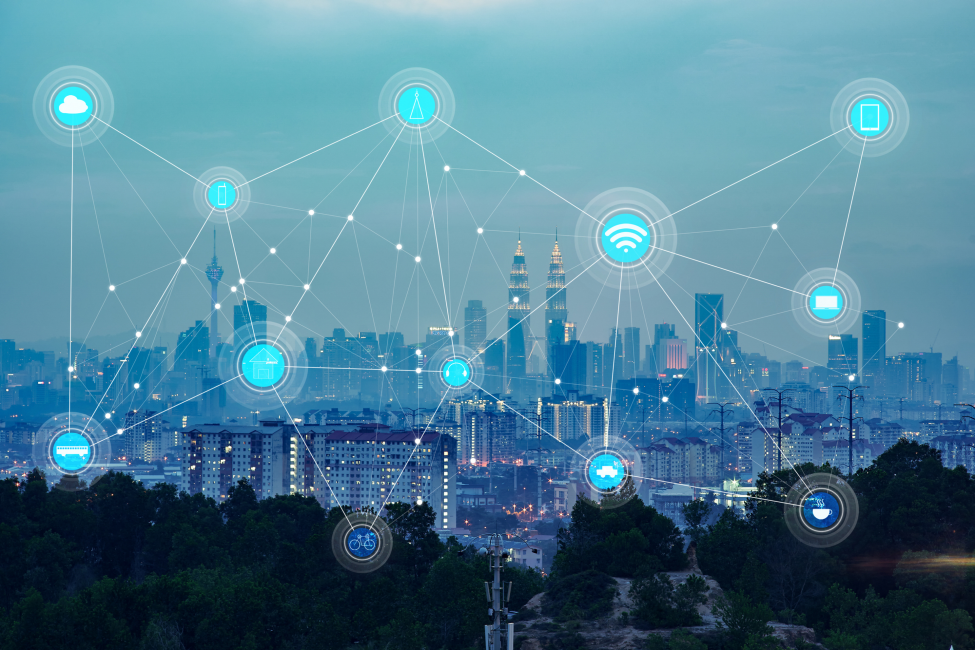 Today, a little over half of the world’s population resides in cities, a proportion that the United Nations expects will rise to 68 percent by 2050. “Projections show that urbanization, the gradual shift in residence of the human population from rural to urban areas, combined with the overall growth of the world’s population could add another 2.5 billion people to urban areas by 2050, with close to 90 percent of this increase taking place in Asia and Africa,” the UN found in 2018. Such a transformational shift introduces key structural challenges for cities to ensure that they continue to remain habitable and sustainable. With that in mind, many now point to smart cities as offering a number of solutions to these challenges.

The concept of smart cities has come to the fore of global thought leadership over the last decade as unrelenting urbanisation has continued to raise concerns over the sustainability of municipalities all over the world. While there is no standard, universally accepted definition of a smart city, most will agree that it involves the use of technology to improve the quality of life of its residents. Typically, this will be information and communications technology (ICT) that a city can harness to become more connected, boost operational efficiency, improve the quality of services and enhance sustainable economic development, among its many goals.

And already these cities are proving themselves to be tantalising concepts: smarter, greener areas that can improve the efficiency of not only the cities but also the lives of their residents. And while major urban areas are certainly receiving the bulk of the attention and investment, many of the most exciting solutions are now also being applied in smaller towns and more rural areas.

Of the technologies tipped to be crucial for driving smart-city development, it is arguably 5G that offers the most promise. Delivering data speeds that are hundreds of times faster than 4G, the potential of the fifth generation of telecommunications technology to transform the operational model of cities is massive. Whether it’s traffic-management systems that utilise sensors to provide authorities with real-time data on traffic flow, telemedicine services that make healthcare services such as patient visits more efficient or 5G that lies at the heart of such innovations, ensuring high-speed connectivity, minimal latency and support for a vastly greater volume of activity is paramount.

That said, even without 5G, the mass adoption of which may still be some way off from being realised, existing technologies are already making smart cities a mouth-watering prospect, with the Internet of things (IoT) now leveraging the data from smart devices to improve operational efficiency significantly. The smart waste-management system of Seoul, South Korea, for instance, utilises sensors in public bins to notify workers when they are ready to be emptied rather than simply emptying them as part of a fixed collection schedule as was traditionally the case. “Unlike the traditional way of collecting general waste and recycling materials, the new way of managing our bins…not only reduced our collection costs by 83 percent but also eliminated waste overflow as well,” the Seoul Metropolitan Government confirmed in 2017.

Smart, connected street lighting, meanwhile, is helping to boost energy efficiency and lower maintenance costs by using sensors to detect nearby activity and adjust their brightness accordingly. Miami leads the way in this field, with more than half a million connected streetlights now operating in the city. And IoT Analytics, a provider of market insights for the Internet of things, estimates that global expenditure on connected streetlights will top $3.6 billion in 2023 at a compound annual growth rate (CAGR) of 21 percent between 2018 and 2023.

Other cutting-edge IoT-based technologies that are currently improving the performance of city services include smart air-quality sensors that can continuously monitor a city’s air quality and thus combat pollution, smart traffic-control systems that use sensors to detect traffic activity and change traffic-light signals accordingly, smart parking systems that help drivers find vacant parking spaces in busy parts of the city and even smart gunshot-detection systems that locate where a gunshot has been fired and immediately alerts the emergency services.

And while greater connectivity will certainly boost operational efficiency, tech can also be used to make cities greener. Oslo, Norway, provides perhaps one of the clearest examples in this regard as its efforts to combat climate change are some of the world’s most pronounced. Awarded the European Green Capital 2019 title by the European Commission (EC), the Norwegian city has adopted a range of environmentally friendly policies and measures, including:

But while anticipation certainly seems to be building over what smart cities can ultimately offer, it may still be too early to expect a world replete with these green, digitally connected urban hubs. And it would seem that constraints on the supply side rather than the demand side are what continue to hold back expansion. A recent survey of 400 construction leaders in France, Spain, Singapore and Japan conducted by construction-industry software company FINALCAD found that nearly half of the respondents believe that the sector still lacks the necessary digital capability required to build a smart city. And although a whopping 95 percent consider their organisations to be “somewhat prepared” to collect big data and adopt digital technologies, 68 percent identify a distinct lack of ability in collecting real-time data as being a major challenge in the development of smart cities, while 28 percent cite not being able to create a digital footprint of a building or asset as being challenging.

“We know from our research that profit margins were already averaging just 2 percent before COVID-19 —while this is no doubt extremely challenging for the industry, it’s also an opportunity for construction firms to embrace digitalisation and arm themselves for the future,” Franck Le Tendre, FINALCAD’s chief executive officer, stated. “By prioritizing digitalisation now, they will be able to tap into future trends like smart cities and green construction. This will enable construction companies to play their part in creating a more sustainable future as well as access new revenue streams that will be key to long-term recovery.”

Indeed, the pandemic is also not helping, either. The strain on local finances means more money is being diverted away from smart-city funding towards areas deemed more of an economic necessity during these troubled times. As such, Kagan, a research unit of S&P Global Market Intelligence, forecasted that the number of new US smart-city deployments will fall by 7 percent in 2021. “Projected growth in the number of smart cities projects in 2020 is the result of budgets set before the pandemic,” the research noted. “The effects of COVID-19 will be fully felt in 2021, when we expect that new projects will shrink.” That said, Kagan does pencil in a recovery in the smart-cities segment in 2022, before faster growth resumes in 2023 and 2024. 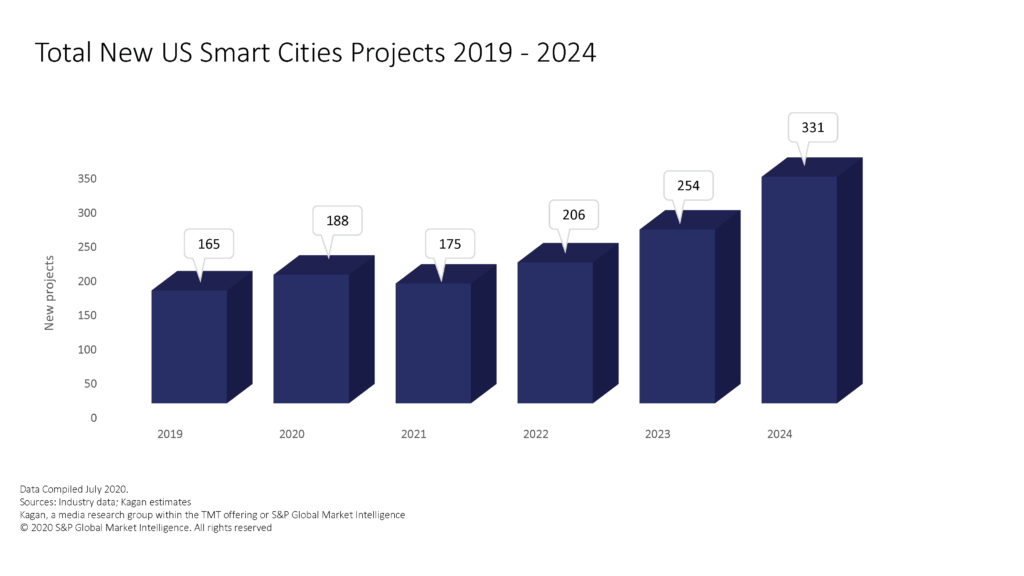 This means that the (compound annual growth rate) CAGR to 2024 is expected to be 15 percent, compared to Kagan’s 30-percent projection delivered in August 2019, well before the pandemic.

“It is a significant slip compared to my previous forecast. I expect that there will be two effects from COVID-19,” Brian O’Rourke, S&P Global Markets’ senior analyst of technology, media and telecommunications, told urban-development publication Cities Today. “There will be an initial municipal revenue shock over the next twelve months or so that will cause delay or cancellation of smart cities projects. In the longer term, I expect the baseline for US municipal revenues to decline, as population growth and employee growth slows or even declines in US cities, driven in part by work-from-home policies remaining in place for the long-term.”

But despite the myriad of technologies that can be used to create a smart city, ultimately, the central focus will remain on its most important resource: its inhabitants. “People [need to be] at the centre of its development,” Takehiko Ryu, regional head for Southeast Asia and Oceania and managing director of Panasonic Asia, recently told Tech Wire Asia. “A smart city with its people as the central focus leverages technology to improve the quality of life of its citizens and provide a clean and sustainable living environment through the application of smart energy, security, mobility, and wellness solutions.”

Ryu highlighted the Fujisawa Sustainable Smart Town (Fujisawa SST) in Japan’s Kanagawa Prefecture as an example of a community-minded smart city. “With Fujisawa SST, we created a sustainable smart town where participating companies and residents are deeply involved in building the community. Residents get to define the objectives of the town, interact, and exchange ideas with the other stakeholders to co-create ideas and solutions that ultimately improve the lives of everyone.”

As such, it would seem that city officials and other stakeholders would do well to gauge residential sentiment when it comes to smart-city service usage as well as identify their specific preferences for devising appropriate strategies to develop smart cities.

Enabling Investment For a Sustainable Future

UK Trade Policy: A Comprehensive Strategy for a New Beginning