Top Posts
Challenges Remain, But There Are Opportunities to Be Had in...
Interview with Mr. Olukayode Pitan, Chief Executive Officer and Managing...
Commodities Outlook for 2023
The Value of Cash in a Time of Crisis: How...
The US-Africa Leaders Summit: Fostering a Closer Relationship with the...
Three Key Sectors in Which to Invest in 2023
Home Slider Why South Korea Is Primed for Fintech Growth
Technology

Why South Korea Is Primed for Fintech Growth 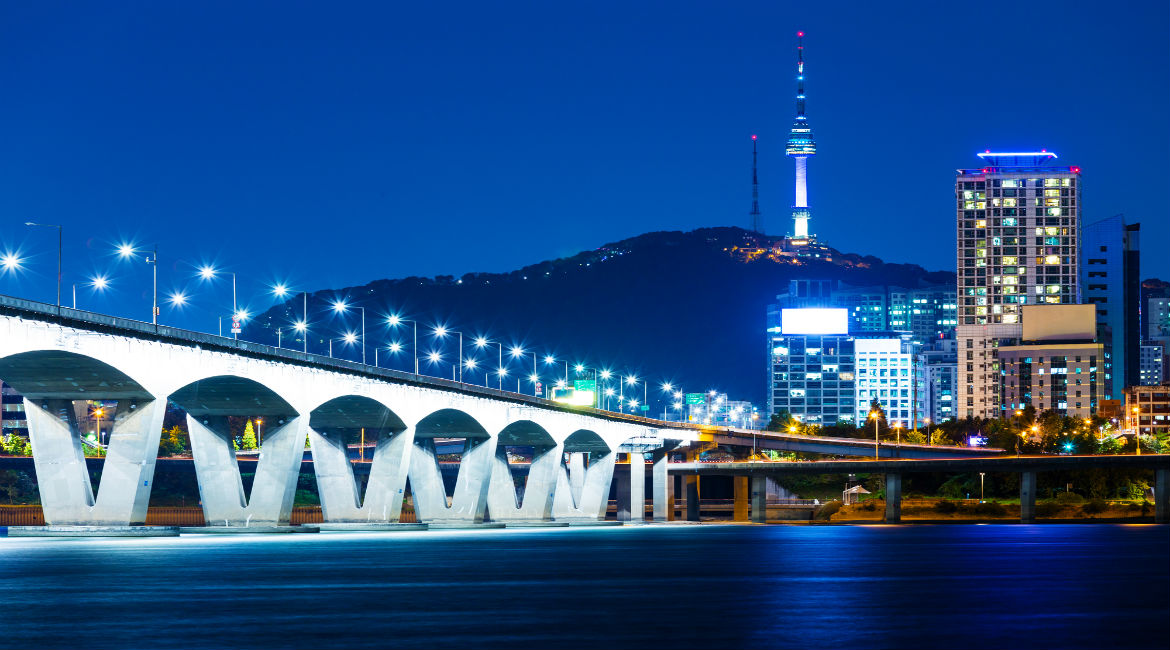 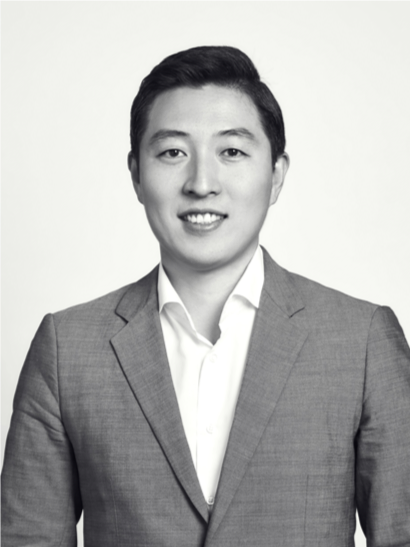 South Korea is well known as a tech-savvy nation, home to electronics giants such as Samsung and LG, and the world’s first to bring 5G internet to smartphones. Yet, in striking contrast to the many incredible advancements that the country has made, Korea is playing catch-up to other parts of the world when it comes to its financial system. Banking incumbents are fixated on old ways, and the country’s history of going through two economic crises in 1997 and 2008 has shaped a very conservative government that has prioritized extra safety over progression. 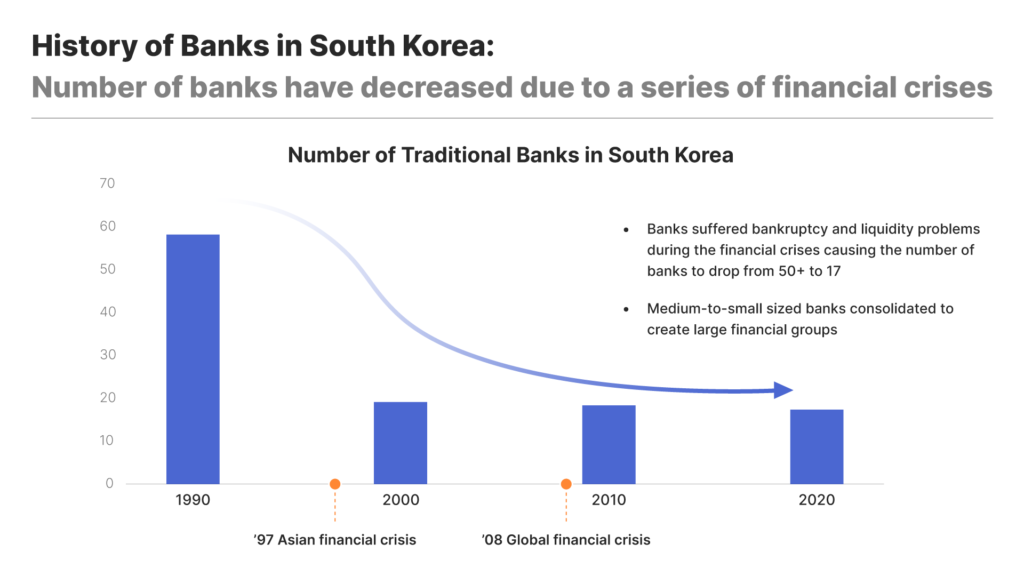 The daily convenience that fintech (financial technology) startups provide to consumers in Korea has gradually shifted public and government sentiment in favor of these newcomers. Seeing the positive change that fintech startups can offer, there is now a big push by the Korean government to foster the growth of fintech. Sweeping regulatory changes are happening in Korea this year for the fintech industry, which the government has designated as the next driver for economic growth. The nation’s top financial regulator, the Financial Services Commission (FSC), has identified specific sectors to support, including payments and lending, to create the necessary legal frameworks that will protect consumers but not hinder fintech innovation and growth.

Quick adoption in the payments space

Payments is an area that has already seen explosive growth and maturation. Despite the fact that Korea has one of the highest levels of smartphone penetration, basic money transfers were still an onerous, cumbersome process until just a few years ago. Previously, consumers in Korea had to input several passwords, use a physical password key card and complete multiple clicks to transfer a mere sum of $10. New fintech players offering mobile payments, compared to the likes of Venmo, came along in 2015 to simplify the process to a single password and one click. 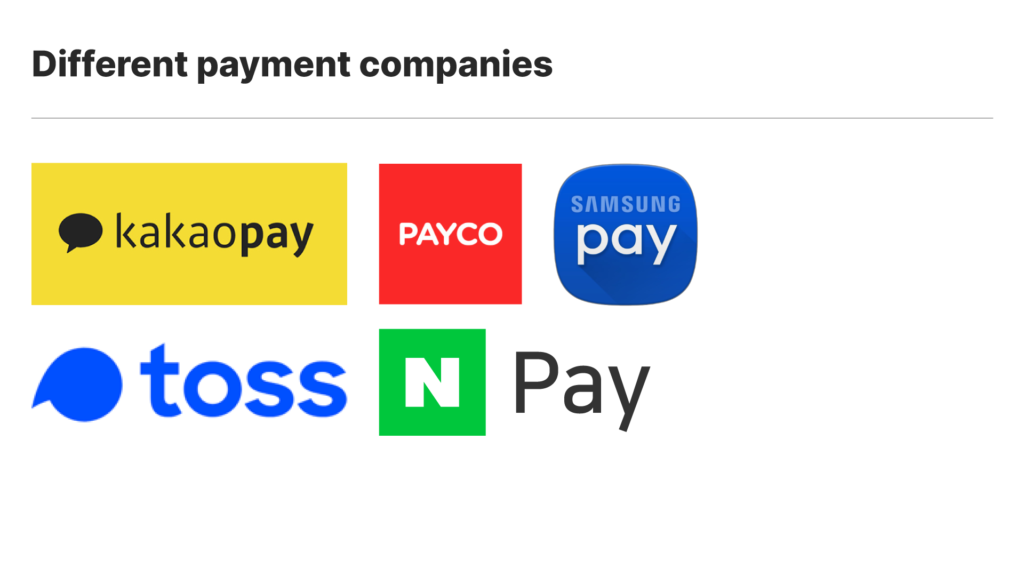 With the support of the government, companies spanning from internet-platform providers such as Naver and Kakao to fintech startups such as Toss have been given permission to offer services to Koreans that make mobile payments and money transfers easier and faster. Previously, stale government regulations and old-fashioned ways of thinking inhibited such advancements. Now, consumers have diverse payment options, such as Samsung Pay, KakaoPay, Naver Pay, Toss and more.

In December 2018, Korean payments app Toss was announced as Korea’s newest unicorn after raising US$80 million at a valuation of US$1.2 billion. Currently, there are only three other Korean privately held unicorns: Coupang, Yello Mobile and Bluehole. As Korea’s startup ecosystem grows and attracts more global attention, the Korean government is keen to help foster the ideal environment in which to grow more successful companies. Being in sync with the government agenda has allowed Korea’s fintech scene to accelerate.

Marketplace lending: the next economic-growth driver

The lending market’s dynamics in Korea have largely been driven by banks and savings banks. The lending market’s size in Korea is one-fifth of that of the United States. As mentioned above, Korea has gone through two economic crises, during which more than 20 banks went bankrupt. Now, six financial-holding companies dominate Korea and are heavily regulated by the government, meaning they have very conservative lending restrictions. Unless you work for a large conglomerate such as Samsung or Hyundai, or you have a traditional white-collar job such as doctor or lawyer, it is very difficult to get a bank loan. 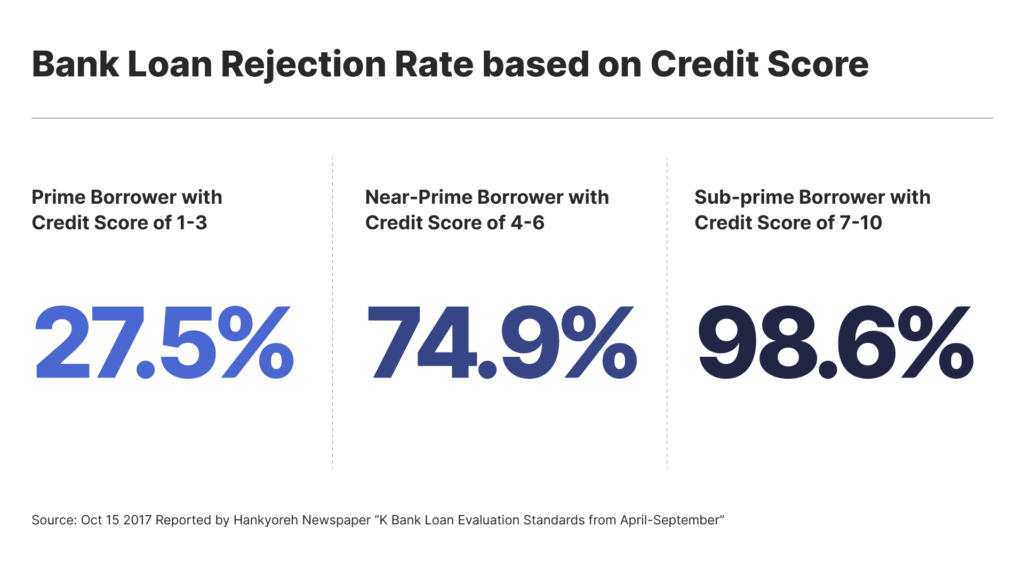 As such, 40 percent of the population cannot secure loans from Tier 1 banks and must resort to secondary markets, such as savings banks and loan sharks.Consumers who cannot get loans from Tier 1 banks go to savings banks to borrow at average rates of 20 percent or higher, and that accounts for US$30-40 billion of new personal-loan origination every year. Getting a loan from a Tier 2 party will negatively impact your credit score, resulting in a higher probability of future loan rejections by the banks. The result from this vicious cycle is: the well-served become even more well-served, and those that are bank-rejected end up having to use expensive loans since that is their only option. The extreme-high-rate loans of these savings banks and loan sharks have created a serious social problem in Korea.

The Korean government also recognized this serious issue, so it allowed marketplace-lending fintech companies to grow in 2015. While the first operating guidelines were created in 2017, it was not until September 23 of this year that Korea passed a law to recognize marketplace lending as an official sector of the financial market. Korea is actually the first country in the world to do this, which goes to show how serious they are about the success of marketplace lending. The new legal framework being adopted by regulators and the National Assembly this year will help build credibility for the marketplace-lending sector, which will propel growth. Of the 150 marketplace lenders in Korea, only 50 are operational, and the top five players service more than 60 percent of the market. Korea will continue to see market consolidation as only the top-performing, most credible marketplace lenders survive.

Globally, super apps have become a phenomenon through which consumers can go to a single app for many different types of services. For example, in Southeast Asia, Grab has widened its services from a mobility company into a financial company. In China, WeChat went from offering a chatting platform to a financial hub, including payments services. Similar to these other countries, Korea’s popular chatting app, Kakao, has grown its verticals to cover mobility, payments and other financial services. 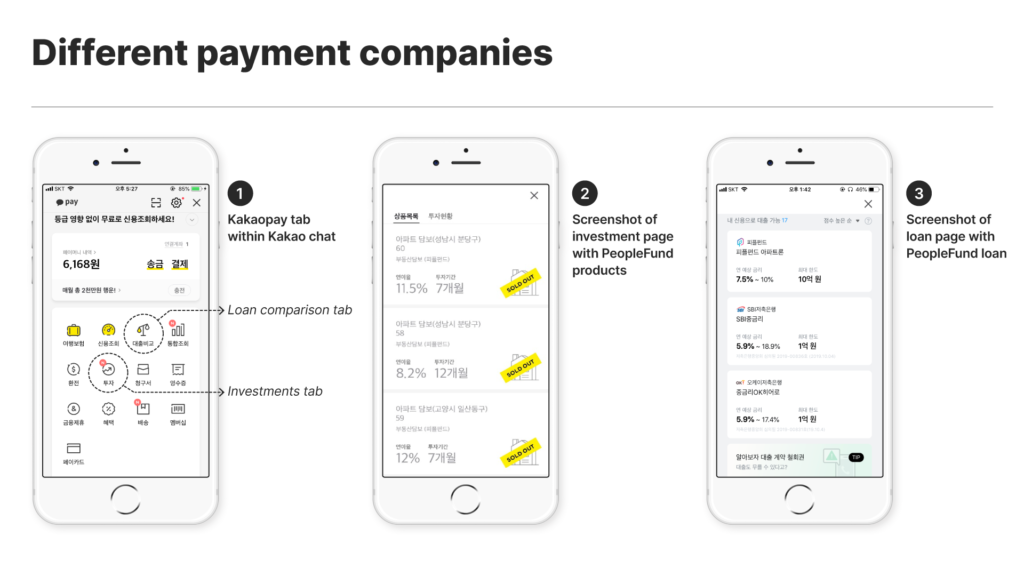 In order for super apps such as Kakao to thrive, they must collaborate with other fintech companies to expand their service offerings. For example, KakaoPay has an “investments” tab and a “loans” tab within its app. Embedded in these two tabs are products that are not created by Kakao but by partner companies. PeopleFund investment and loan products are found within the KakaoPay app. It is a win-win situation for both companies, since Kakao can expand its financial offerings without having to recreate something on its own, and PeopleFund gains access to Kakao’s existing userbase.

Incumbent banks in Korea are also actively engaging with fintech companies in order to take part in fintech disruption. They are partnering with fintech startups to collaborate on new projects to modernize their images, and they are also acting as strategic investors by investing in fintech companies. For example, Shinhan Future’s Lab is a global acceleration program created by Shinhan Bank, one of Korea’s leading banks, to foster the growth of Korean startup companies, especially ones with the ambition to expand their businesses into Southeast Asia.

Collaboration between fintech companies, tech companies and incumbent banks is a good thing because it will ultimately help drive innovation for better services and products.

Korea is a bank-accessible, financial-data-based society with a high penetration of credit cards, smartphones and internet connectivity. The necessary infrastructure is already in place, creating an environment that is optimal for fintech growth in Korea. The big push by the Korean government to foster fintech development is a positive sign for startups and overseas investors.

The Financial Services Commission announced in September that it would be setting up a US$252-million fintech fund to be used by the government to invest in startups. The government also opened a financial-regulatory sandbox this year, which allows startups to temporarily test out new forms of financial services without regulation hurdles. All in all, South Korea is primed for fintech growth, and the current governing party has made it clear that its priority is to scale up fintech startup companies so that they can become major players on the global stage.

Consumers can just sit back and enjoy the plethora of options from which they can choose to meet their financial needs.