Top Posts
Challenges Remain, But There Are Opportunities to Be Had in...
Interview with Mr. Olukayode Pitan, Chief Executive Officer and Managing...
Commodities Outlook for 2023
The Value of Cash in a Time of Crisis: How...
The US-Africa Leaders Summit: Fostering a Closer Relationship with the...
Three Key Sectors in Which to Invest in 2023
Home Brokerage New Russian Stars Are on the Rise
Brokerage

New Russian Stars Are on the Rise 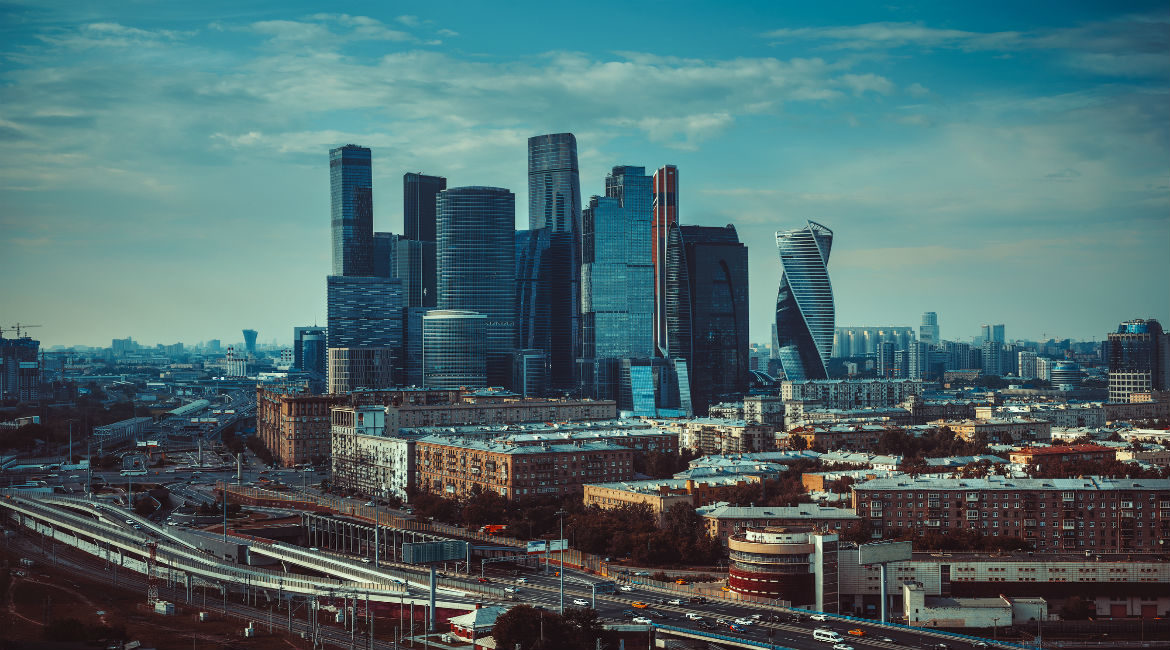 Will the current year see this trend continue? No one can know for sure, but we believe that, in the absence of any unpleasant economic and political risks coming to pass, 2018 should prove to be another strong year.

First, a quick look back at 2017, which was very successful for the Russian equity market. There were a number of internationally marketed IPOs (initial public offerings) and SPOs (secondary public offerings), and investor interest was driven by several factors:

Traditionally the IPO market has been dominated by a comparatively small number of large issuances, many of them from commodity and FIG space. But 2017 saw different types of deals emerge, from new sectors and smaller corporates.

We are often asked if investors are looking at companies outside the commodity space. The answer is very definitely yes; there is a strong appetite among investors. Alongside the well-established giants, companies such as Globaltruck, the haulage operator, and Obuv Rossii, the shoe retailer, came to market and found favour with investors.

What these very different companies have in common is that they can show investors that they have robust and coherent expansion strategies, strong financial track records and credible management and shareholders. These are the ingredients essential for a successful IPO—companies need to be able to show and explain their business profiles.

We have seen quite a lot of companies in all sorts of sectors that have been growing and developing, thanks to the people who have been successful in building those businesses. Quite a few of these growth companies are already in public markets, and we anticipate several more will join in 2018, which is quite an opportunity for the international banking community. 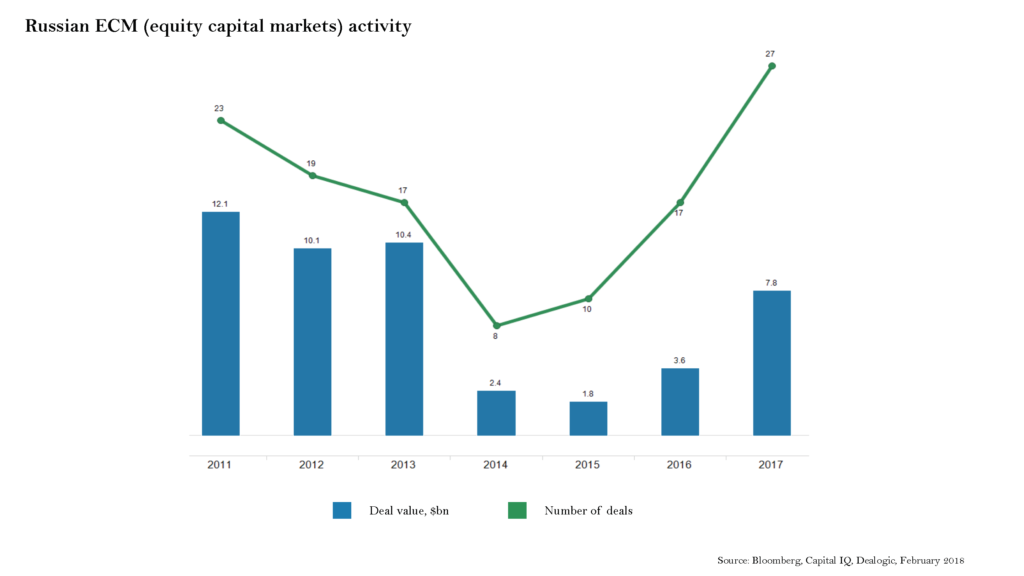 Macro-economic and political challenges in 2018

However, overall volatility is still quite high, and, despite the revival in 2017, the total market volume and the transaction numbers are still significantly lower than the historic highs. The key risks are much the same as in previous years—changes in oil prices and slower growth of the Russian economy. Obviously, there is also a possibility of further evolution of the sanctions on Russia; however, it is very hard to predict and comment on international political developments while recent sanctions initiatives have been rather moderate so far, and we hope that there won’t be dramatic deterioration in that respect in 2018.

Keep an eye on the commodities markets

We at BCS Global Markets have a rather optimistic view on the oil price and believe there is more upside potential than risks. The average Brent price in 2017 increased to $54/barrel (bbl), which is in line with BCS Global Markets projections and above consensus estimates.

We believe that this trend will continue going forward with a 2018 Brent estimate of $65/bbl and an expectation that prices will continue to grow to $80/bbl during mid-cycle levels. The view of our analysts is that this trend is driven by growing demand and higher oil prices, which are required to support shale-oil production growth in the United States and to facilitate development of higher cost formations required to match demand by 2020.

The independent International Energy Agency (IEA) shares our optimism about oil prices, and in its most recent world energy report noted: “Powerful impetus…is enough to keep oil demand on a rising trajectory to 105 million barrels a day by 2040: oil use to produce petrochemicals is the largest source of growth, closely followed by rising consumption for trucks…for aviation and for shipping.”

These projections are well above market consensus; however, if these trends materialize, such developments will be very supportive for the Russian economy and eventually for the Russian equity market. 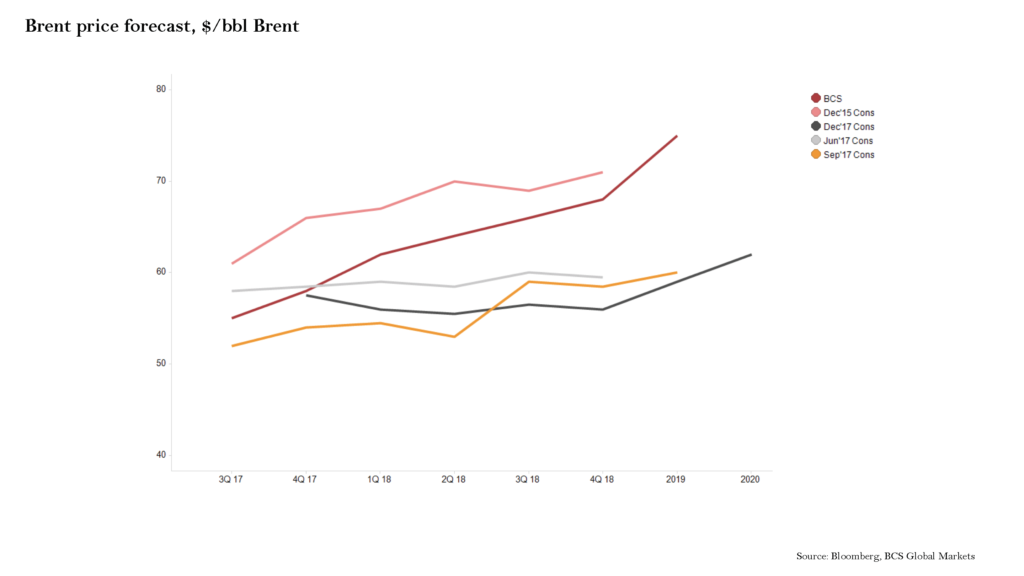 The Russian economy has finally turned a corner to see growth in 2017, and a number of indicators suggest that local markets are gradually recovering. It is also true that major global institutions and investors have also been more optimistic about the Russian opportunity.

Christine Lagarde, CEO of the International Monetary Fund (IMF), was complimentary in April of last year of steps taken by Russia in challenging economic conditions, and in its latest Article IV consultation for Russia, the IMF “commended the authorities for their effective policy response which…has helped the Russian Federation exit a two-year recession”.

The IMF has made special mention of Russia’s three-year fiscal framework, re-introduced last year, to reduce policy uncertainty. All in all, the IMF has made a generally upbeat assessment: “Higher oil prices, easier financial conditions and improving confidence will support the economy…. GDP is forecast to grow by 1.4 per cent [in 2017]. The recovery should gain steam as oil prices are projected to stabilise and remain relatively high (US$55 a barrel on average over the medium-term, compared with the US$26 low in 2016), real wages are recovering, the banking system has stabilised, and corporate profits have continued to improve.”

It was also positive on investment, with Russian equities seen as undervalued by many emerging-markets specialists. The IMF also noted this in its report last year: “With financial conditions easing and confidence strengthening, the stage is set for a pick-up in investment and consumption.”

One may question the sustainability of future economic growth, but there is a perception that the bottom of the cycle has been passed. The IMF also said “short-term risks have declined, with the danger of an oil-price slide diminishing and higher US interest rates not expected negatively to affect local markets”.

If asked to sum up, I would say that the markets are now open, and there is good potential for companies to raise funds, whether using bonds or IPOs, not the least to raise funds from international investors. Companies are increasingly interested in doing this. When entering public markets, they will need strong advisers and the backing of sound financial institutions.