Top Posts
How Gamification is Catapulting Digital Banking to the Next Level
Challenges Remain, But There Are Opportunities to Be Had in...
Interview with Mr. Olukayode Pitan, Chief Executive Officer and Managing...
Commodities Outlook for 2023
The Value of Cash in a Time of Crisis: How...
The US-Africa Leaders Summit: Fostering a Closer Relationship with the...
Home Brokerage Why Gold Prices Have Disappointed in 2018
Brokerage

Why Gold Prices Have Disappointed in 2018 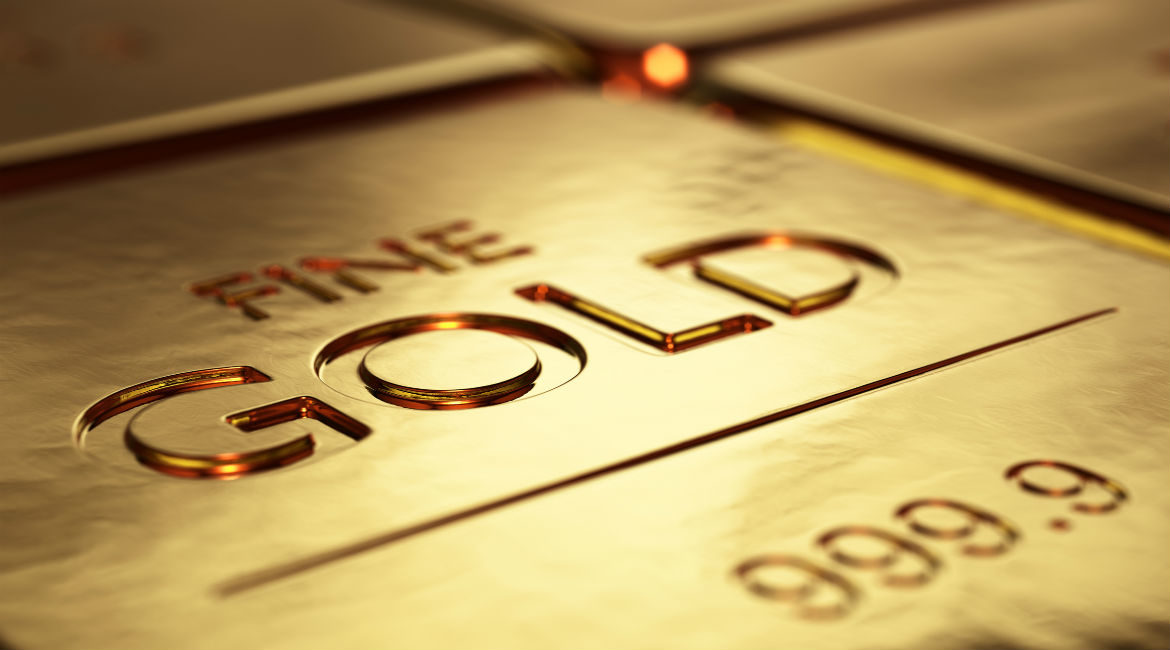 When looking at the performance of major markets such as US equities and oil, 2018 has so far provided much for bulls to cheer. But one market that has clearly underperformed year-to-date is gold. By August, gold prices had dropped to a 20-month low before they staged a slight recovery towards the end of the month. Having lost around 8 percent in 2018, and around 14 percent on an annualized basis, gold also fell below the $1,200-per-ounce mark for the first time since 2017’s first quarter.

Most agree that the biggest reason for the slump is the renewed strength in the US dollar. The U.S. Dollar Index, which measures the value of the dollar against a weighted basket of currencies belonging to six of the US’ biggest foreign-trade partners—the euro, yen, pound sterling, Canadian dollar, Swedish krona and Swiss franc—recently climbed to levels last seen in June 2017. And with pronounced gains being posted by the greenback throughout the second quarter in particular, a dollar-denominated troy ounce of gold has become increasingly expensive for non-US investors, which in turn has forced them to scale down their demand for the precious metal.

According to the World Gold Council (WGC), the weakness has been largely precipitated by a shedding of holdings in gold-backed ETFs (exchange-traded funds) around the world. Indeed, holdings fell for a third consecutive month in August, by 40 tonnes to 2,353 tonnes, which caused total assets under management to dip to some 3 percent lower than July’s levels. The WGC attributes much of this sell-off to North America, which has shed $1.65 billion worth of long gold positions, partly due to what it asserts as “a risk-on appetite by US investors in the face of an expanding economy”. Supporting the WGC’s findings, a recent article from Business Insider citing Michael Hartnett, Bank of America Merrill Lynch’s chief investment strategist, revealed that fund managers have exited gold “at a pace not seen since December 2016”, with $1.2 billion being withdrawn for the week ended August 24. Hartnett calculates that a whopping $7 billion in gold outflow has been recorded over the past three months.

But given the current economic environment, gold’s sell-off makes sense. During times of economic uncertainty, or when global markets experience a downturn, investors normally increase their holdings in gold due to its qualities as a safe-haven instrument. Not being positively correlated with traditional asset classes such as equities, bonds and other commodities—and often being negatively correlatedwith them—gold tends to retain its value, or even make gains, when those assets are under pressure in challenging market conditions. This was certainly true during the global financial crisis of 2007-09 and in 2016, when Brexit, the US elections and a huge sell-off in Chinese equity markets at the beginning of the year all contributed to create an unprecedented climate of market uncertainty.

Conversely, given the buoyancy being experienced by the US economy at present, it is only logical that investors exit their positions in safe-haven precious metals and shift towards better-performing markets. Second-quarter annual gross domestic product (GDP) growth in the United States now stands at a very healthy 4.2 percent, for instance, while the U6 unemployment rate measure is at its lowest level since 2001. So it is perhaps no surprise that the S&P 500 (Standard & Poor’s 500) Index recently hit record highs, having gained 3.3 percent in August. The benchmark stock-market index also recently broke the record for staging the longest bull run in history. Indeed, as gold has fallen by around 8 percent this year, the S&P 500 has gained just over 8 percent, illustrating the closeness of the negative correlation that often exists between gold and equities.

The volatile economic situation in Turkey—a top-five gold-consuming nation—has also adversely impacted the yellow metal in recent weeks. According to the WGC’s “Gold Demand Trends” report for the second quarter, the country has experienced a 10-percent year-on-year decline in jewellery demand in response to “the very high and volatile local gold price at a time of political tension”. Indeed, the Turkish lira has already lost around 40 percent of its value against the dollar in 2018 alone as increased US trade tariffs and mounting dollar-denominated debt have crippled the economy, making gold drastically more expensive for Turkish consumers at present. The snap general election in June and at the start of Ramadan also reportedly “dampened investor interest” towards the end of the quarter. 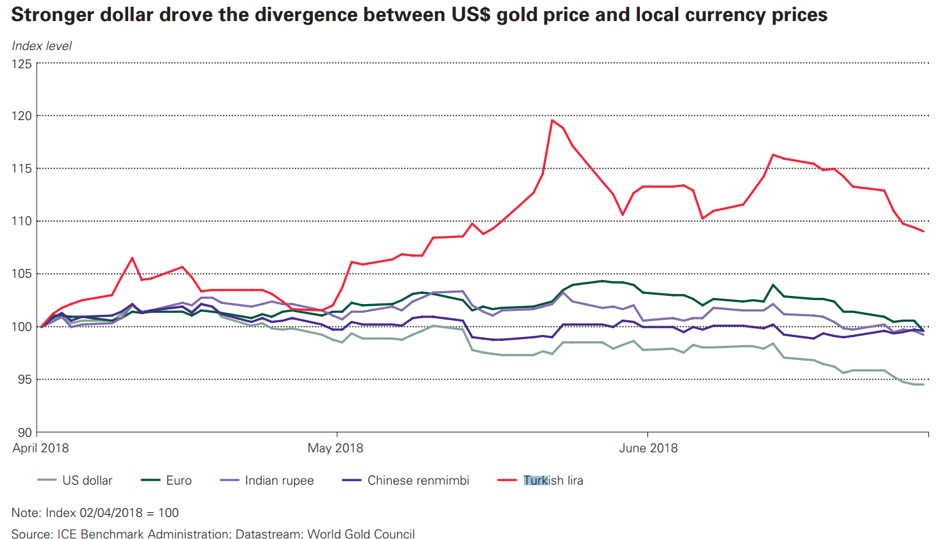 To compound gold’s woes, the US Federal Reserve is currently on a monetary-tightening path that will very likely see interest rates being increased both this year and next. Higher US rates are likely to continue tempting investor funds out of emerging markets and back into the US to take advantage of the higher returns on offer. In turn, the heightened demand for US currency will continue to put upward pressure on the value of the dollar, which again will not help gold’s fortunes.

At this stage, all such bearish factors seem to be outweighing the mounting trade tensions between the US and China, as well as the ending of the détente—and renewal of US-led sanctions—against Iran. While one might assume such geopolitical events would spur investors to seek safety in gold, the WGC observes that “confrontational trade rhetoric and sanctions have so far played in favour of the US”. Ultimately, this may explain why the gold market has largely ignored such issues.

But some analysts don’t expect gold to languish for much longer. Speaking recently to Kitco News, George Milling-Stanley, the head of gold investments at State Street Global Advisors, said that he expects demand for the yellow metal to pick up by the end of the third quarter, following a likely hike in interest rates by the Federal Reserve, which would be the third increase this year. Upcoming holidays in certain nations—such as November’s Diwali festival in India—will be a major factor for gold demand’s recovery later in the year, according to Milling-Stanley, who also believes prices could bounce back over $1,350 by the end of the year.

And as far as Michael Hartnett is concerned, gold may recover if the dollar “follows US Treasury yields lower”. But such a scenario does not appear to be on the horizon. With recent data from the US Commodity Futures Trading Commission (CFTC) showing record bets being placed by hedge funds against long-dated Treasury instruments, few are expecting yields to fall anytime soon. Net positioning in gold also turned short in August for the first time in 17 years, meaning that more traders expect gold to fall than rise—which doesn’t fill one with much confidence over gold’s bullish aspirations in the future. With very few bullish factors in its favour, therefore, it may still be a while before gold once more regains its shine in the eyes of investors.

Transforming to the Digital Age Country of Smiles – Battleground of Titans

The Challenges Facing a Home-Host Regulator