Top Posts
Can the Indo-Pacific Economic Framework Expand US Economic Influence in...
Banks Remain Uniquely Vulnerable to Sophisticated Cyber-Attacks
Western Banks Willing to Accept the Short-Term Pain of Russian...
Why the US Is Ramping Up Its Presence in Somalia...
How Technology Is Helping to Solve Global Supply-Chain Issues
UK Inflation Climbs to Fresh 40-Year High
Home Banking A ban on buying dollars is boosting Argentina’s travel industry
BankingBrokerageLife Arts & Travel

A ban on buying dollars is boosting Argentina’s travel industry

Tourists are pouring onto the streets of Buenos Aires, the Mendoza Wine Regions and other popular Argentinian destinations amid a ban on Argentine citizens buying or holding United States’ Dollars.

According to government immigration figures, the number of tourists travelling to Argentina has increased by 27.1 percent since 2010. Compared to previous years, tourists now spend 25.9 percent more in Argentina which has grown the value of the tourist trade to an estimated $3.37 billion industry. While the main influx of foreign visitors come from South American countries like Brazil, the number of European and North American tourists has also increased in volume. A total of 863,492 tourists came from Brazil to visit Argentina while European and North American tourists numbered 583,538 and 528,169 respectively.

Argentina has seen a sharp drop in their economic growth since 2010, as GDP fell from 3.2 percent to -0.7 percent in mid-2012. Meanwhile, the government used central bank reserves to payback its foreign debts. The objective of this recent currency ban was to slow down capital flight out of Argentina. The ban has fueled the devaluation of Argentina’s native currency, the Peso, and foreigners are getting a hefty premium while exchanging dollars on the shadow or so called ‘blue market’.

It is technically illegal for locals and foreigners to conduct foreign exchange transactions in the black market at “dolar blue” rates in Argentina. However,  the black market of Dollar is so widespread and popular that major daily newspapers and internet blogs are providing latest exchange rates for the blue market.  Effectively, the “dolar blue” exchange rate (USD/ARS) has reached 8.5 to 8.98 per US dollar while official rate is around 5.8.

The rising tourism figures suggest that the economic meltdown and following demand for the US dollar is creating a win-win situation for both locals and foreign tourists. Tourists are getting cheaper deals and locals are getting the valued dollars which they desperately try to find.

As a result of rampant hyperinflation which reached a yearly average of 325 percent, the government of Argentina established a currency board that pegged the Peso to the US dollar back in 1999 at 1:1 parity. 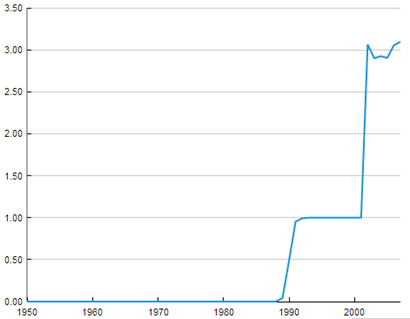 However, the peg didn’t stop Argentina from defaulting on its foreign debt back in 2002, which caused the Argentine economy to collapse. Since Cristina Fernandez won re-election back in October 2011, her administration has severely limited the purchase for US dollars once again. Since May, 2012 it is virtually impossible for Argentines to buy dollars though a legitimate source as each foreign currency transaction must first be approved by the Argentine tax agency, Administracion Federal.

Analysts from JPMorgan Chase bank have forcast that in 2013, Argentina’s foreign exchange reserve (USD) will have highest drop since 2002, when the country defaulted $95 billion of foreign debt. Effectively, the black market rate is following the rules of economic fundamentals while the currency control rate set by the central bank is just practicing failed central command economy. Ezequiel Aguirre from Bank of America commented on the current plight “the more the government tries to control the market, the more people will want to buy dollars.”

Talking about controls, the government of Argentina has allegedly even tried to manipulate the famous Big Mac index that measures purchasing power parity in the international markets by comparing the cost of a Big Mac on a dollar basis. Due to a government decree, McDonald’s Big Mac costs 40 cents less in Argentina! How can we blame the people for not trusting their government?

Due to the massive inflation Argentina observed during the dark decade of debt default and following large economic swings, Argentines saw their savings virtually vaporized as the value of Peso plunged against US Dollar. Fast forward a decade; people have learned the harsh lesson in trusting their government and central bank to preserve the value of the Peso. Today, they prefer to hoard US dollars for savings as a hedge against the potential devaluation of Peso once again. The US dollar is so lucrative to Argentines crossing into bordering Uruguay where ATMs dispense the currency. People are so desperate to preserve the real value of their savings that they are purchasing anything of value that is safe from inflationary effects, including luxury cars.

Argentina has some of the best natural tourism assets in the world. In terms of International tourism, Argentina has always been a popular destination, ranked top in South America. The currency devaluation following the latest economic slowdown is serving as an even greater encouragement for international tourists to visit Argentina now, instead of later. If you are planning to visit Argentina anytime soon, you had better pack a lot of hundred dollar bills instead of traveller’s cheques as locals prefer hoarding big denominations of dollar bills in this “cash only” economy.