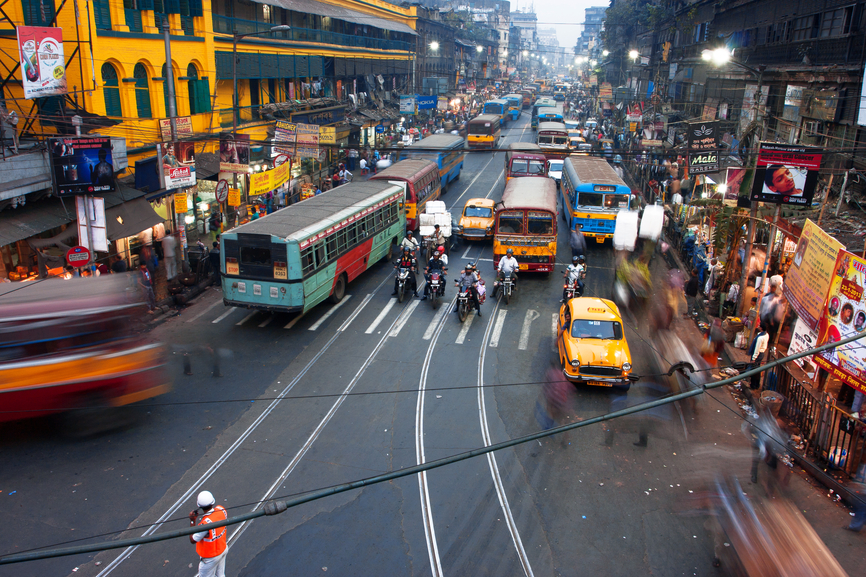 The banking sector in India has the advantage of access to one of the largest and most stable global financial networks. It has been strengthened by a series of financial and regulatory reforms implemented recently, such as flexibility in lending rates, gradual dilution of government holdings in public-sector banks, and the easing of restrictions on private-sector and international banks. As the Indian economy is poised for a faster growth rate, its financial sector dominated by both insurance and banking companies looks attractive for long-term investment. Indian banks and insurance companies can take advantage of the growing domestic market while aspiring for global competitiveness.

Although the international banking giants of the US and elsewhere were shaken by the financial crisis—resulting in large bailouts by the US and other federal governments, the Indian banking industry remained stable, thanks to the conservative approach adopted by Reserve Bank of India (RBI). The potential growth of the banking sector stems from the fact that only 15 percent of the population has ever borrowed from banks, and more than 40 percent do not even have bank accounts. Continued urbanization and rising middle-class incomes are the other indicators of the long-term potential of banks.

While most banks lend primarily to industry and services (to the tune of 68 percent), farm lending is 13 percent and personal lending 19 percent. Home mortgages account for more than 50 percent of personal lending.

The banking sector witnessed a surge in credit demand from 2005 to 2010, as the corporates came up with huge expansion plans, and the growth in the spending power of the middle class led to a significant expansion in retail banking. However, the growth opportunities resulted in serious issues of capital adequacy, and the prolonged recession led to the generation of a bulge in non-productive assets, invariably making the sector look vulnerable. This led to continued volatility in banking stocks. Major issues faced by public-sector banks are:

Indicators of banking strengths in India:

The Indian banking sector reported a net profit of 1,027.51 billion rupees (approximately 16 billion USD), with almost an 11.5-percent net-profit margin on its gross turnover of 149 billion rupees for the FY 2012-13.

Foreign direct investment (FDI) and portfolio investment limits in private banks have been hiked to 74 percent, but in the cases of PSU banks they remain at 20 percent. FDI in banking and insurance can improve financial stability and capitalization, Use of better technology and Risk-management capability.

Financials of some typical banks and listed insurance companies are shown in the table below: 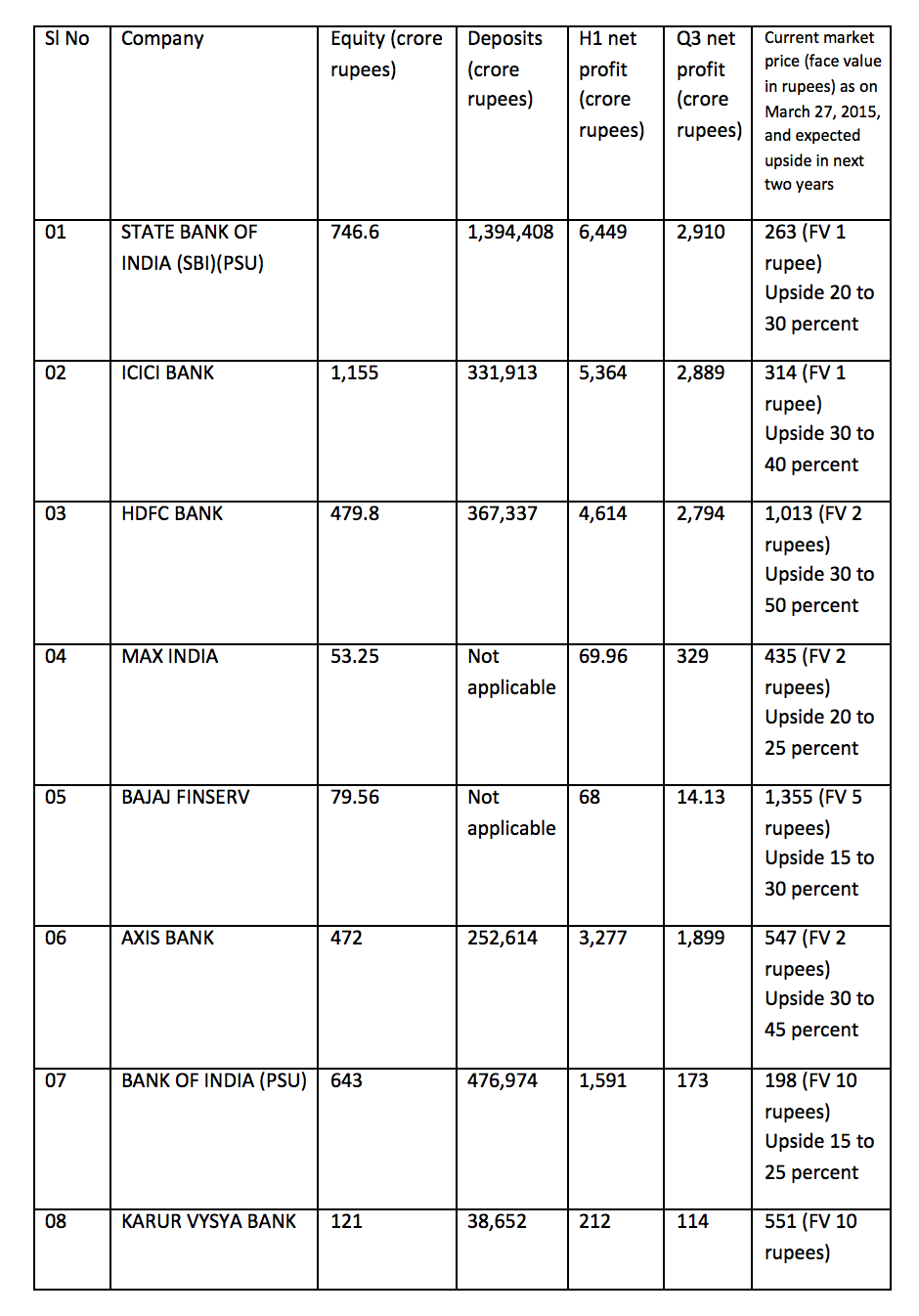 Some profitability parameters in the banking space:

A. Interest spread has been varying from:

B. Percent net-profit margin varied from:

C. Percent return on net worth varied from:

Current prospects of the banking sector

The government has undertaken some major reforms in the financial sectors, including banking and insurance. Hiking the FDI limit in the insurance sector is one of them. In private-sector banking, the FDI limit is 75 percent. As inflation showed an easing trend, RBI indicated a dovish monetary policy by reducing the policy rate by 25 basis points in March 2015 after a similar cut in January 2015, thus effecting a total cut of 50 basis points in 2015. The effective repo rate now stands at 7.5 percent. Banks are expected to lower lending rates and deposit rates in a phased manner, while some have already passed on the benefits to borrowers. With commodity prices continuing to fall globally, RBI is expected to cut its policy rate further, and a pickup in borrowing is expected. Although banking stocks were hammered down in the market during the month of March, as company results indicate growth in their bottom lines (around the middle of FY 2015-16), banking stocks may recover and remain steady for the remaining months of 2015-16. Real gains in the banking and insurance sectors could be seen during FY 2016-17.

PSU banks, too, could do well during FY 2016-17, as now they are permitted to raise additional capital to meet the latest capital-adequacy norms, while diluting the government’s holdings to the 52-percent level. More private banks are likely to be set up as in-principle approvals are being given to applicants. RBI has announced guidelines for local area and payment banks, which have received a good response.

Recently a scare regarding NPAs (non-performing assets or bad loans) of the banking sector shook the market. While announcing H1 as well as Q3 results, banks continued to report lower earnings and a higher provisioning for bad debt on a year-on-year basis. RBI has taken timely action to manage the issue of NPAs. (For the banking sector, NPAs had accelerated from 4.1 percent in March 2014 to 4.5 percent in September 2014). Due to the prolonged recession, major sectors of the economy such as engineering construction and infrastructure, mining, textiles, metals as well as aviation accounted for more than 55 percent of the major stressed assets of PSU banks.

The bank regulator has tightened rules for asset reconstruction companies, hiking the minimum requirement of investment in security receipts from 5 to 15 percent. RBI has also issued revised guidelines allowing flexibility in infrastructure-project loans and advances for core-industry project financing. Norms for converting loans into the equity of defaulting companies, too, have been made more flexible and workable.

The government has also strengthened the powers of the IRDA (Insurance Regulatory and Development Authority) to ensure a more effective regulation of the sector.

The fortunes of the financial sector, including that of banks and insurance, are driven by the performance dynamics of the core economies of manufacturing, trade and services. Current indicators show that growth has bottomed out, and the RBI has been indicating a dovish policy stance. Gradual reduction in NPAs with growth in credit demand could be a couple of quarters away. Private banks could be the first to recover when the economy shows signs of sustainable recovery. Very large spending programmes outlined in the budget of FY 2015-16 along with optimistic railway outlays indicate the positives of the economy and the banking sector. The revival of the infrastructure and housing sectors could perk up the banking space. As loss-making infrastructure, mining and metal companies turn around, even the PSU banks could show smart recovery. While shares in private banks such as Axis Bank, Kotak Mahindra Bank, Karur Vysya Bank, HDFC Bank and South Indian Bank could be accumulated during dips, State Bank of India, Bank of Baroda and Bank of India should be on the watch list.

The home-mortgage financial sector in India is bullish again. This sector has witnessed a growth rate of almost 20 percent on average between 2009-10 and 2013-14, and the government budget could provide further momentum to the home-building sector. Current growth prospects are much better, thanks to the policy initiatives of the government and allocations for low-income housing. Loans are expected to grow at 30 to 40 percent, and NPAs are much lower for the commercial-banking sector.

HDFC Bank has been the biggest player in the home-loan segment apart from insurance. It has the largest market share.

Other renowned players include:

The focus in the latest budget on housing and infrastructure projects indicates that the new government is committed to its goal of “Housing for All”. The National Housing Bank has been refinancing housing-finance companies and banks. Most of the home-loan stocks are now available at attractive prices, as these are not fancy stocks.

The Parliament of India recently ratified the Insurance Laws (Amendment) Bill, promulgated earlier as an insurance ordinance through presidential proclamation, hiking the upper limit of foreign investment in insurance from 26 to 49 percent. The law requires that management control and ownership of insurance companies remain with Indian collaborator entities. The aim is to reduce the restrictions on entry to the insurance market and enable flows of much-needed capital into the sector. MetLife and AIG are some of the foreign players who already have operations in India through joint ventures.

Significant joint ventures in the insurance sector include:

India, along with other countries in the Asia-Pacific region, is considered important by the global players in the insurance space. The large insurable population exceeding 550 million is an important consideration in determining the attractiveness of this sector. India’s insurance market could grow 400 percent in the next 10 years from its current size of 60,000 crore rupees. India’s life insurance sector is one of the largest in the world, with an approximate 40-percent growth rate based on new business premium collections. The number of policies is expected to grow at a 12-to-15-percent CAGR (compound annual growth rate) in the next decade. With the penetration level expected to reach 5 percent from the present level of 3.9 percent in the next five years, the total market size could reach the one-trillion-USD mark within seven to nine years.

India, with the second largest population in the world, has very low life insurance coverage, in terms of life insurance premium collections, accounting for only 2 percent of global premium collections against a population that is more than 16 percent of the world’s population. Penetration of life insurance (based on a premium-to-GDP ratio) has remained at 3.5 to 3.9 percent of GDP in India, compared to 11 percent in Japan and 9 percent in the developed world. A projected growth rate of 7 to 8 percent in GDP means a huge rise in demand for insurance products, considering the rise in life expectancy and income levels of the upper-middle and middle class populations with fast-changing lifestyles. In terms of the number of life insurance policies, India is at the top with almost 360 million policies, the number growing at a rate of more than 12 percent annually.

The recent relaxation of foreign ownership and investment limits has evoked a positive response from global insurers, and some of them have shown interest in increasing their stakes in the existing joint ventures. Many more such joint ventures are likely to follow.

International joint ventures could face some challenges at initial stages in the Indian market. The life insurance market has been completely dominated by LIC (Life Insurance Corporation), wholly owned by the central government. The market share of LIC fell gradually from 100 percent to 75 percent since the insurance sector was opened up to private investors 15 years ago.

In an environment of strong competition, a bancassurance model could help both banks and insurance companies, as this would strengthen existing distribution channels, particularly in rural markets. The anticipated evolution of post offices as banks in a couple of years would further accelerate the penetration of banking and insurance in rural markets.

Out of 28 major non-life insurers, some companies from the private sector also operate as underwriters of policies for accident coverage, travel and health insurance. Some well-known names in this category are:

The major public-sector, non-life insurers include:

Insurance regulator IRDA has estimated that this sector will require additional capital to the tune of 500,000 million rupees within the next 10 years.

Some of the state-run, non-life insurers such as National Insurance Company as well as New India Assurance Co are considering an IPO (initial public offering) ahead of listings on the stock exchange, with the central government considering a divestment of its stake in the insurance arm. The giant Life Insurance Corporation being listed could be a huge opportunity for investors. Such a move, however, is bitterly opposed by unions. Complete privatization of insurance and banking is not going to happen anytime soon. As far as PSU banks are concerned, the government has decided to keep a 52-percent stake.

Why the FTSE 100 hit an All-Time High