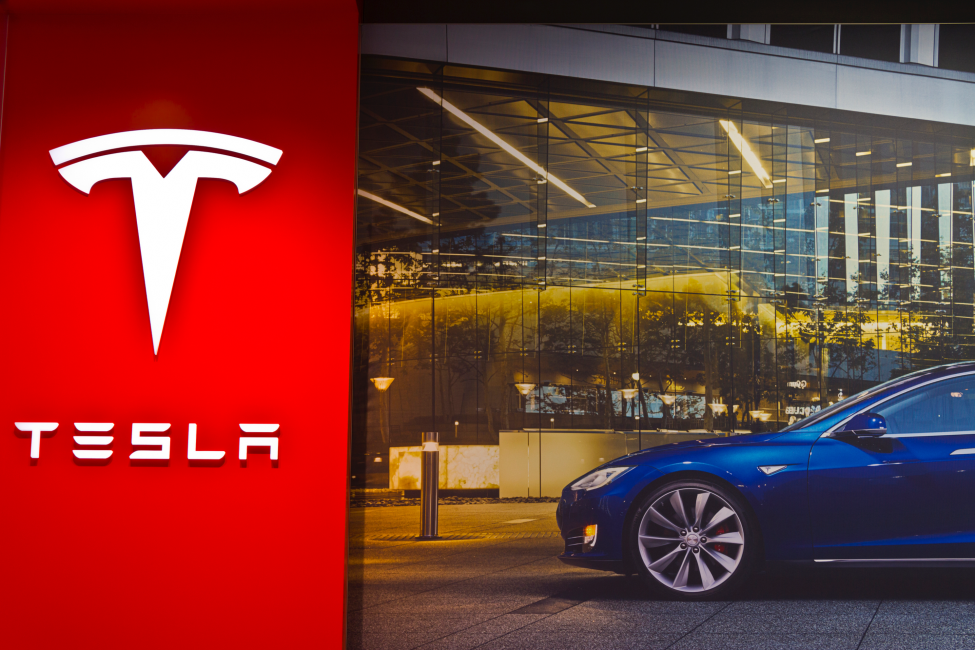 On January 27, Tesla released its financial results for the fourth quarter (Q4) 2020 and the full year ended December 31, 2020, confirming that the Palo Alto-based electric-vehicle and clean-energy company’s earnings had missed estimates for the quarter.

Nonetheless, the company continued to grow its sales and generate a profit in the midst of the coronavirus pandemic. “Despite unforeseen global challenges, we outpaced many trends seen elsewhere in the industry as we significantly increased volumes, profitability and cash generation,” the company stated in a press release.

The main highlight from the release was the $10.74 billion in revenue generated during the quarter, which beat analysts’ expectations of $10.4 billion and is 46 percent more than in Q4 2019. It was also the first time the company’s revenue surpassed the $10-billion mark for any quarter. Revenue for the full fiscal year 2020, meanwhile, was recorded at $31.54 billion, which was 28 percent higher over the year.

Tesla’s automotive revenue grew by 46 percent year-on-year to $9.31 billion in Q4, while its energy generation and storage revenue was 72 percent higher at $752 million. Services and other revenue, which include sales of Tesla merchandise, apparel and vehicle accessories, also grew strongly to $678 million. 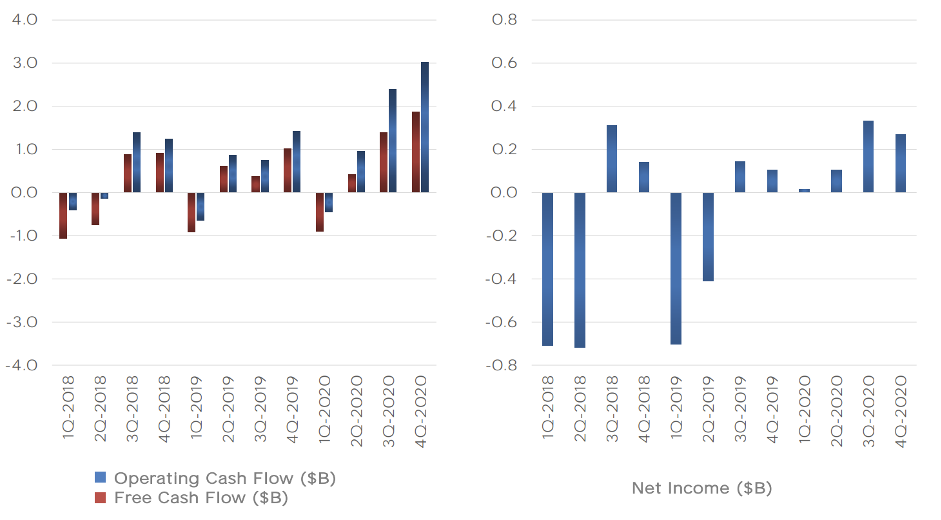 Tesla generated almost $1.9 billion in free cash flow during the fourth quarter. Net income GAAP (generally accepted accounting principles) across the year stood at $721 million, however, which is a welcome turnaround for Tesla, after it reported an $860-million loss in 2019. Net income for Q4 was $296 million.

However, the reported results, on the whole, were mildly below expectations, causing Tesla’s shares to drop by as much as 8 percent on January 28, 2021. Despite reporting a sixth consecutive quarter of profit, and doing so in a year racked by a global crisis no less, earnings fell short of estimates. Adjusted earnings per share (EPS) were recorded at 80 cents versus expectations of $1.01.

As for operating expenses, the company spent $522 million on research and development (R&D) in the last quarter of the year and a further $969 million on selling, general and administrative costs.

Both vehicle delivery and production numbers set new records for the year. In terms of deliveries, Tesla posted a 2020 total of 499,550 vehicles—just marginally less than Wall Street expectations of half a million. Nonetheless, this was a hefty 36-percent more than 2019’s total of 367,500, which is especially encouraging, given that the restrictions from the coronavirus pandemic induced marked declines in the sales of most traditional carmakers.

Similarly, production was in line with analysts’ estimates, with Tesla making just under 180,000 vehicles during the quarter at its facilities in the United States and China. The Model 3 and Model Y were the leaders, as expected, representing 163,660 units, while 16,097 units of the Model S and Model X were also produced. Total production for the year was up a whopping 71 percent to 509,737. 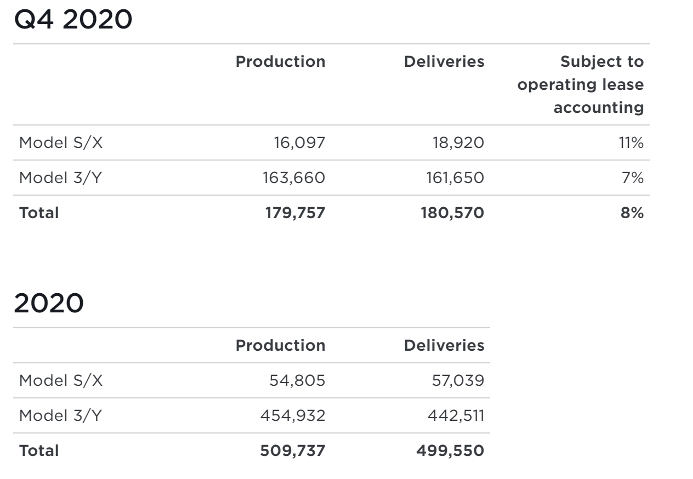 Much of this growth can be attributed to the boost in production at its Shanghai Gigafactory. “In 2020, we produced and delivered half a million vehicles, in line with our most recent guidance,” Tesla confirmed in early January. “In addition, Model Y production in Shanghai has begun, with deliveries expected to begin shortly.”

“Importantly, all eyes will be focused on the company’s delivery unit guidance for 2021, with the trajectory looking like ~750k to 800k [approximately 750,000 to 800,000] with our view that the one-million threshold could be hit by 2022 for Tesla,” Dan Ives, an analyst at Wedbush Securities, wrote in a note to clients.

Tesla provided some guidance for vehicle deliveries for the first time in its shareholder letter. “We are planning to grow our manufacturing capacity as quickly as possible. Over a multi-year horizon, we expect to achieve 50 percent average annual growth in vehicle deliveries,” the electric automaker acknowledged. “In some years we may grow faster, which we expect to be the case in 2021.”

Tesla also confirmed that it remains on track “to start vehicle production this year with structural batteries leveraging in-house battery technology” at its facilities in Berlin and Austin, where the Model Y will also be produced. “While our total market share in Europe increased in 2020, Gigafactory Berlin should enable a significant increase in local deliveries, similar to what we saw after constructing Gigafactory Shanghai,” Tesla explained in its letter to shareholders. “Buildout of our Berlin factory continues as planned.”

Tesla’s Fremont factory, meanwhile, will resume production of its Model S and Model X during this first quarter after retooling its production lines for both models. The S is expected in February, with the X due shortly afterward. Commencement of deliveries of the Tesla Semi, a class-8 big-rig truck, are also in Tesla’s plans for this year.

And on a call with analysts, Tesla’s chief executive officer, Elon Musk, suggested a slight production delay for the much-awaited Cybertruck. “If we[‘re] lucky, we’ll be able to do a few deliveries towards the end of this year; however, we expect volume production to begin in 2022,” he said. Musk also confirmed that Tesla will make electric vans at some point, although battery-cell production for this vehicle remains a challenge. “We simply don’t have enough cells right now,” he admitted.

It Takes Two: Why the FS and Travel Partnership Has Never Been So Important