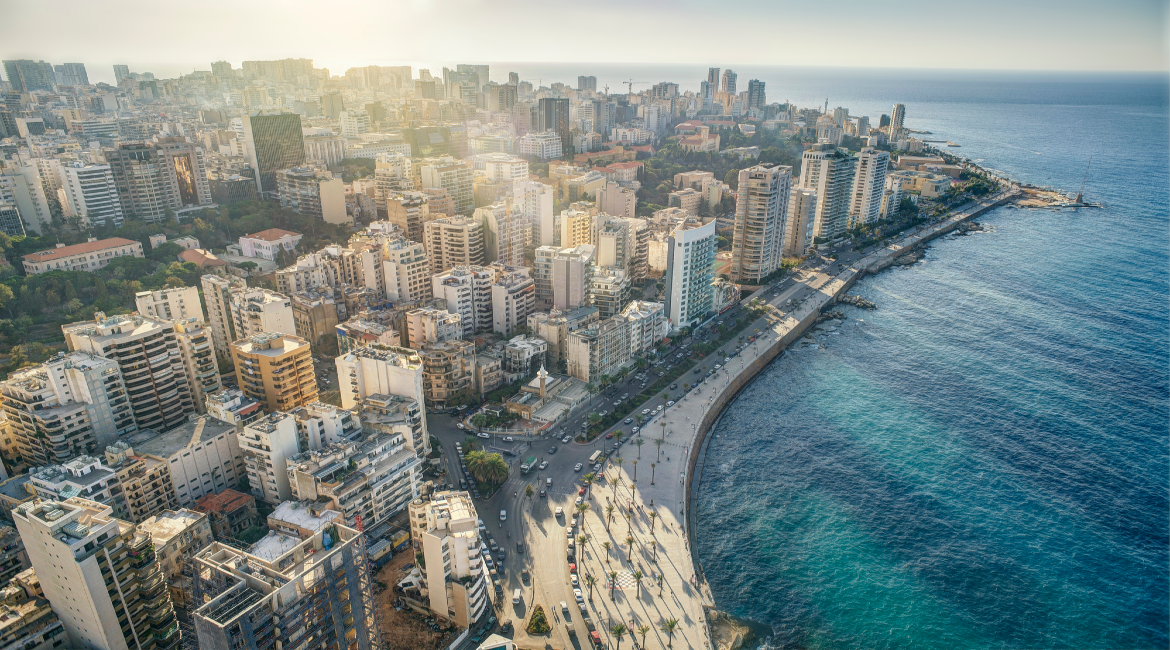 On the final Monday of 2019, protesters staged a sit-in at the Beirut offices of Bank Audi, Lebanon’s largest bank. Chants of “We want the money!” were heard as the furious protesters—many of them Audi’s clients—demanded that tellers give them their funds. But with stringent withdrawal limits imposed across much of the country’s banking sector that are now confining customers to just a few hundred dollars per week, Lebanon’s worst financial crisis since the days of its civil war has left much of the country strapped for cash.

Several factors have led to Lebanon’s current quagmire, but few have been more impactful than the country’s rather bemusing monetary policy over the last decade. During this time, the central bank, Banque du Liban, liberally hiked its interest rate for depositors to fund the government’s spiralling debt problem, as well as to pay for its substantial volume of imports, and to draw in dollars to help maintain the Lebanese pound’s 22-year-old peg to the US currency. As such, the period following the financial crisis saw Lebanon being one of the very few countries to offer investors highly attractive rates of return, while much of the rest of the world slashed rates to stimulate economic recovery. This made the small Middle Eastern nation a magnet for wealthy investors from around the world.

But relying on overseas dollars was a dangerous policy. The central bank continued to pay higher and higher rates to attract funds into the country, despite those dollars being insufficient to cover interest and capital payments. According to the International Monetary Fund (IMF), its US-dollar reference lending rate rose from around 7 percent in early 2018 to 9.7 percent in June 2019, which in turn led to higher Lebanese-pound lending rates. With economic conditions deteriorating, poverty rising, and interest rates continuing to rise, the impact within Lebanon was truly felt once the number of deposits at commercial banks started to decline precipitously in early 2018, with foreign deposits spectacularly crashing about a year later.

Many have called the central bank’s behaviour during this time as being akin to running a Ponzi scheme. Banks’ incoming customer dollars were lent to the central bank at attractively high rates, and in return, they purchased government debt, all the while making consistent profits on such transactions. It is not surprising, then, that deposits placed with the central bank between 2017 and August 2019 swelled by a whopping 70 percent. The dividends paid out by banks, moreover, went to shareholders, of whom many were politicians and who were thus incentivised to continue with the scheme.

The government, meanwhile, kept amassing debt, partly through often misguided spending measures, such as expanded public hiring as a way to buy votes and ill-conceived solutions for Lebanon’s ailing electricity sector. By 2019, almost half of the government’s fiscal revenues went to servicing external and domestic debt, and most of the rest was used to pay public-sector salaries. Indeed, the debt has ballooned to such alarming levels that Lebanon stands today as the world’s third-most indebted nation with a 152-percent debt-to-GDP ratio, behind only Japan and Greece.

But the fuse inside the country was decisively lit on October 17 when lawmakers somewhat bizarrely attempted to rein in this widening fiscal deficit by imposing an unprecedented tax on the usage of the popular WhatsApp messaging application. Protests then intensified when Prime Minister Saad al-Hariri resigned a couple of weeks later. Hariri mysteriously disappeared for 10 days before emerging in Saudi Arabia to announce his departure, which triggered much speculation and concern that he had been abducted by Saudi officials. As such, the incident prompted many of the affluent Lebanese to move their deposits out of the country.

Concerns have also grown since then that the government is prioritising foreign creditors, who together hold around $12-billion worth of Lebanese debt, at the expense of ordinary citizens, who continue to face strict withdrawal limits. Indeed, with banks across the country closing during the final quarter, analysts suspect that such drastic measures have been taken due to the crippling dollar shortage, which has prompted banks to minimise the risk of capital flight. But by closing and then imposing withdrawal restrictions, more panic has set in throughout the country. And with protests growing, more depositors have tried to withdraw their money to send abroad. But the banks have placed such huge sums of deposits with the central bank that imposing stringent controls on dollar accounts has become their only option, other than resorting to depleting the country’s reserves.

Depositors now fear that their savings could be at risk, despite government assurances to the contrary. With the banking sector identified as one of the chief culprits in causing the country’s recent troubles, commercial lenders have been on the receiving end of much of the ire, which has only become worse since the capital controls came into effect. With the cash shortage seemingly all but confirmed, frustrations have grown to such an extent that rioting protesters have smashed up banks and automated teller machines, while one protestor even took a bank employee hostage. Reports citing judicial sources confirm that dozens of lawsuits have also been filed by depositors against banks for withholding their money. And with the sector having long enjoyed a cosy relationship with Lebanon’s political elite, protesters have taken particular aim at the resulting corruption, demanding the recovery of funds that were purportedly embezzled by politicians. Indeed, many are demanding that the entire governing regime steps down.

Lebanon’s woes can also partly be attributed to external factors. The civil war in neighbouring Syria, for instance, has not helped matters. With refugees streaming into the country, significant pressure has been placed on public services such as water and electricity, while tourism has also taken a nosedive. And lower oil prices have only exacerbated the situation, as the substantial number of remittances from Lebanese expatriates in neighbouring oil-rich countries has declined. With the likes of Saudi Arabia having recently threatened to expel Lebanese nationals, the declining inflow of remittances has reduced the contribution towards Lebanese banks’ efforts to fund additional debt, while the remittance dollars that previously helped to support the pound’s peg has significantly diminished.

Indeed, the Lebanese pound is now under mounting pressure. Although the official peg is at 1,500 pounds, the economic downturn has meant that foreign-exchange dealers have been trading dollars at more than 2,600 pounds in recent weeks. The IMF also recently acknowledged that the pound is around 50 percent overvalued. Unsurprisingly, comments by Lebanon’s central bank governor, Riad Salameh, that “nobody knows” how much more the cost of dollars traded on the black market will increase have not been received well, while fears continue to grow over a potential devaluation of the pound that would seriously hurt the country’s savers. Speaking to the Financial Times, Sibylle Rizk, the public policy director at lobby group Kulluna Irada, noted that despite all of the dollars that have flowed into Lebanon, “We have no infrastructure, no productive sector. We have nothing. All this money was burnt on consumption… through imports and real estate, which is a bubble, and to defend the peg.”

Hariri remains as caretaker leader in the interim and has resorted to asking the IMF and the World Bank for support amid growing concern over a possible default. His successor, Prime Minister-designate Hassan Diab, was named on December 19, although he is also accused by protesters of being part of the corrupt ruling elite. Diab is backed by militant group Hezbollah, which is an integral part of the Lebanese government but is also designated as a terrorist organisation by the United States and has been recently on the receiving end of new sanctions that have only put further pressure on Lebanese citizens.

The World Bank (WB) believes that Lebanon’s economy contracted by 0.2 percent in 2019 and possibly by even more, given the deteriorating environment of the final quarter. “Balance of payments constraints are leading to dire conditions for businesses and workers. Declining confidence in the economy is also causing higher dollarization of deposits, which impose a heavy toll on the balance sheets of banks and Lebanon’s central bank.” As such, the World Bank believes that the poverty level could rise to half from around a third (by 2018 estimates) should a worsening situation materialise. “Unemployment, especially among youth, is already high and could further rise sharply,” the WB observed in November.

There are now growing calls for banks to service imports rather than debts, with Lebanese officials having asked for help from foreign countries and banks to secure capital for this purpose. “We will ask the international donors to provide Lebanon with $4 billion to $5 billion in soft loans to finance the purchasing of wheat, fuel oil and pharmaceuticals,” Ghazi Wazni, the newly appointed finance minister, told a local newspaper. “This injection will cover the country’s needs for one year and will also help reduce the run on the US dollar.” But donors are demanding that Lebanon implement reforms and tackle systemic corruption before they agree to provide support.

To date, the central bank is managing to fulfil its repayment obligations to domestic banks, although Lebanon’s sovereign debt has been downgraded several times, and investors are increasingly concerned that it could default on its next bond payment in March. Ratings-agency Fitch recently predicted that Lebanon will default on $88 billion of public borrowing, while S&P Global Ratings downgraded the long-term issuer credit ratings for three of Lebanon’s biggest banks to “selective default” from CCC. And with the private sector continuing to default on loans, some believe that Lebanon’s banking sector now has a higher rate of bad debt on its books than the United States did in 2008. As talk of collapse continues to grow, Lebanon remains on course to face arguably the most challenging financial moment in its history.

RegTech 3.0: Easing the Cost of Compliance

Any bank in the world that has accepted the transfer and deposit of more than $100,000000 from a single person in Lebanon, and does not return it, is guilty of the genocide against the citizens of Lebanon who are not politicians or bankers