Top Posts
Are Your Bank’s Digital Marketing Metrics Meaningful?
Identifying Beneficial Ownership: A Regulatory Conundrum
Forging a Digital Framework to Harmonize the Global OTC Derivatives...
The Paradox of AI and Investing
Malaysia’s Fight Against Climate Change: Perspectives from a Central Banker
Crypto-assets and the Relevance of International Private Law
Home Banking After the Referendum, What Now for Greek Banks?
Banking 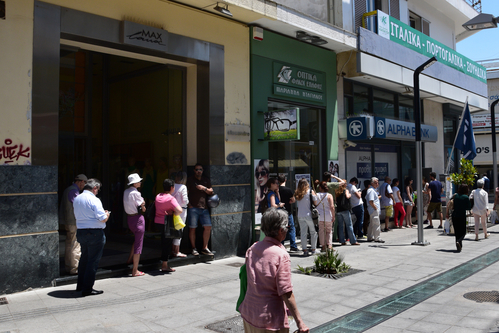 Since the most recent major developments in Greece have taken place, including the default on the $1.7 billion payment that was due to the IMF on June 30th, as well as the resounding rejection by Greek voters of further austerity measures in exchange for bailout terms, attention has turned to saving the Greek banking sector. Lenders have been closed for business since Monday June 29th and remain perilously close to insolvency, which means that it has been of prime importance for Greece’s government to Greece to ensure that its banking system stays in operation for the long-term.

Greek lenders are finding it increasingly tough to access funds that have kept them afloat thus far. On Wednesday July 8th, the ECB decided against adding to its existing level of emergency funding – the Emergency Liquidity Assistance (ELA) – for the banking sector at €89 billion, with ECB Governing Council member Christian Noyer asserting that the ELA amount will not increase if the government fails to secure a bailout deal with creditors. Moreover, the central bank also increased the discount level (or ‘haircut’) on certain collateral offered by banks receiving ELA via the Bank of Greece. This move effectively reduces the value of the collateral placed with the ECB, meaning that more assets would be required to cover Greece’s borrowing going forward.

Having entered the July 4th weekend with a mere €1 billion available to depositors, banks are now facing a severe liquidity problem. Depositors are eager to withdraw cash so they are not exposed to a transformation of their accounts at short notice from euro-denominated to drachma-denominated. Therefore, in a bid to stop banks running out of cash altogether, capital controls were implemented last week, which have placed a cap of €60 per day on the amount that can be withdrawn by customers from ATMs. Many reports are predicting that banks will run out of cash if a new deal can’t be struck with creditors.

Following an emergency meeting on July 7th, Greece has been given until Sunday 12th to formulate and submit a new plan for creditor approval. All outcomes for Greece are still possible, but if it does not produce a sufficiently substantive new proposal of measures, the result could be “the bankruptcy of Greece and the insolvency of its banking system”, according to the president of the European Council Donal Tusk. Greece’s exit from the single currency union is also a fairly likely possibility.

Should Greece manage to deliver and unlock bailout funds, it is still probable that the banking industry will be subject to some consolidation, whereby several lenders will be closed and merged with (or acquired by) stronger banks. Speaking to Reuters on the condition of anonymity, one European official has suggested that Greece’s ‘big four’ – National Bank of Greece, Euro bank, Piraeus and Alpha Bank – could be trimmed down to just two. Customer deposits and accounts would be protected, however, as they would simply be transferred to the new owner. Greece’s banking system could undergo a restructuring process similar to the ones experienced by Cyprus, where two of the island’s main lenders were shut, and Ireland, where three banks were either closed or merged. In a sector where the big four hold around 90% of the market share, a further reduction in competition would be undesirable but perhaps necessary.

Despite the gloomy forecast, there are some options which could provide a modicum of relief for Greece’s banking system. Should Greece exit the eurozone and return to the drachma – which still remains plausible – all bank deposits would be converted to the Greek currency which may create enough of a repellent against an impending bank run. Alternatively, if Greece manages to remain part of the union, it could try to generate liquidity from other global financial institutions. Short-term loans from private banks, for example, could provide some immediate relief to lenders, but for such a deal to work, the creditor would have to accept the standard of collateral that is posted by Greece, which is far from guaranteed.

At present, however, all eyes are on the Sunday deadline for the government’s revised austerity proposal. The government believes that the country’s banks can hold out until then without shutting down. If terms are agreed, then a brand new deadline comes into focus – July 20th, when Greece must repay government debt held by the ECB itself. If not, widespread nationalisation of the banking sector would as part of the country’s exit from the eurozone would almost certainly be the result. Either way, it seems apparent that when it comes to its banking sector, Greece is now entrenched between a rock and a hard place.