Top Posts
Western Banks Willing to Accept the Short-Term Pain of Russian...
Why the US Is Ramping Up Its Presence in Somalia...
How Technology Is Helping to Solve Global Supply-Chain Issues
UK Inflation Climbs to Fresh 40-Year High
Extended Reality and the Metaverse Are Leading Financial Services into...
Digital Currency: India’s Move Towards a Digital Financial System
Home Finance BofA Poised to Benefit from Rising Interest Rates
Finance 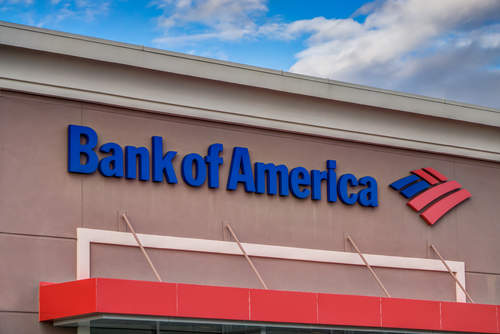 The low interest-rate environment persisting since the global financial crisis has stymied the profitability of the banking sector, limiting what banks can earn on their loans and other assets and investments.

Back in 2008, the US Federal Reserve was forced to relax its monetary policy and facilitate excess liquidity in the buildup to the financial crisis. The central bank’s interventions to ease the effects of the economic crisis that ensued have induced low interest rates in most advanced economies. However, with significant improvement in the US economic picture now, the crisis finally appears to be in the rearview mirror, and this low interest-rate environment is likely to end sooner or later. According to the Fed’s announcements, it has become apparent that an increase in the rates is possible before the end of this year.

The broader US stock index, the S&P 500 index, has been in an uptrend since March 2009, powered in part by low interest rates. But that doesn’t mean that rising interest rates could end the stock bull market. The Fed will only move toward raising interest rates if it sees broad-based improvement in the economy and labor market. In other words, a rising interest-rate environment is the product of stronger economic growth. A gradual increase, therefore, can be beneficial to equity investors and does not necessarily spell the end of the bull market. As a matter of course, certain sectors are poised to benefit from rising interest rates, and banks—through their ability to lend, to insure and to manage a growing base of assets—are in the sweet spot.

For that reason, a lot of research nowadays is focused on the influence higher interest rates will have on banks’ earnings, capital-adequacy levels, other related measures and even possible strains. That’s because interest rate risk management is at the heart of a bank’s business model.

In the event of the rate hike, as expected, it would be safe to assume that Bank of America (NYSE:BAC) will generate considerably more net revenue as its balance sheet is “asset sensitive to both a parallel move in interest rates and a long-end led steepening of the yield curve,” as per its latest Form 10-Q for the Securities and Exchange Commission. But let’s hold that thought for a moment, and let’s examine how the inevitable rise in rates will impact bank performance first.

A bank’s financial intermediation business model involves borrowing short-term and lending long-term, also known as “maturity transformation”. Therefore, a bank’s balance sheet is typically characterized by a maturity mismatch. This maturity mismatch tends to increase a bank’s net-interest margin any time there’s a steepening of the yield curve. As a result of which, long-term assets will have higher incremental returns than the incremental costs of short-term liabilities.

In Bank of America’s case, the bank has projected earnings scenarios on page 109 of its latest 10-Q (also shown in the illustration above). Accordingly, a 100-bps (basis points) increase in both long- and short-term rates will rake in an additional $4.55 billion to its annual net-interest income, representing the best scenario. To put it into perspective, BofA’s profit dropped 58 percent to $4.88 billion in 2014, weighed down by a nearly $17-billion settlement with the federal government over toxic mortgages. On the other hand, a 50-bps decrease on both ends of the yield curve will shrink its net-interest income by $3.5 billion, and thus would make the worst scenario. The bank projects other intermediate scenarios as well, but as you can deduce, a downward shift in rates is bad for its earnings.

BofA is the purest play on rising interest rates

The Fed is starting from a historically low level of near-zero interest rates. It should also be noted that the economic situation across the Atlantic is not very rosy, with Greece expected to exit the Eurozone any time now. The International Monetary Fund has warned the Fed about the impacts of a sharp rate hike. In view of which, initial hikes are expected to be gradual and modest. In turn, the impact from higher rates may not be immediate. While a nonchalant market reaction in the early stages is expected, markets also tend to price in events even before they happen. Thus, it would be safe to assume that a lot of repositioning has already taken place.

But here’s the thing about the Charlotte-based bank: It stands to benefit more than its peers when interest rates start to rise. Why? It’s because Bank of America accounts for changes to long-term interest rates in its bond portfolio in a way that makes its quarterly results more sensitive to initial rate fluctuations as compared to the results of other banks.

According to a recent Deutsche Bank report, BofA’s profits could increase 20 percent this year on a 1-percentage point rate hike at both ends of the yield curve. The report forecasts an increase of 0.09-0.16 percent in BofA’s net-interest margin. Its net-interest margin in 2014 was 2.49 percent, and its net-interest income came in at $39.95 billion.

There are also a few rate-related risks that you should be aware of before you get too excited about the potential impact of rates on Bank of America’s stock price.

The increase in interest rates can potentially change the bank’s balance sheet structure and maturity mismatch. In other words, the event could alter BofA’s loan-to-deposit ratio and lead to deposit disintermediation, i.e., reduced use of banks and savings institutions as intermediaries in the borrowing and investment of money, in favor of direct involvement in the securities market. It goes without saying, deposits are a bank’s lifeline, since they generate more funds available for lending and other regulatory capital adequacy levels. Disintermediation usually occurs whenever interest rates rise because the opportunity cost of investors or depositors saving in low-yield assets also rises. Hence a change in the balance-sheet structure is very much likely and that, in turn, will affect the net-interest margin.

Although higher rates are favorable for BofA’s net-interest income, they have the opposite effect on noninterest income and on the value of the bank’s available-for-sale (AFS) assets, including debt securities and cash-for hedging instruments. Lending activity, which produces noninterest income when loans are underwritten or sold, typically slows down when rates are high. And as far as AFS assets are concerned, interest rates and the value of fixed-income securities are inversely related. Hence a rise in interest rates causes a decline in securities values. The reduced value of long-term interest-rate sensitive assets can offset any increases in net-interest margin arising from the maturity mismatch of bank balance sheets and resulting in the reduced book value of equity.

Apart from these risks, the rising-rate environment should have a net positive effect on Bank of America’s results. Fed Chairwoman Janet Yellen has indicated that a rise in the interest rates is possible but on the back of a fully grown US economy. The markets believe that the Fed could act in September.

Bank of America’s shares are down about 9.17 percent year-to-date, compared with the 0.99-percent rise in the KBW bank index (KBWB), which tracks stocks of 24 large U.S. banks.